Marikana’s theatre of the absurd claims another life 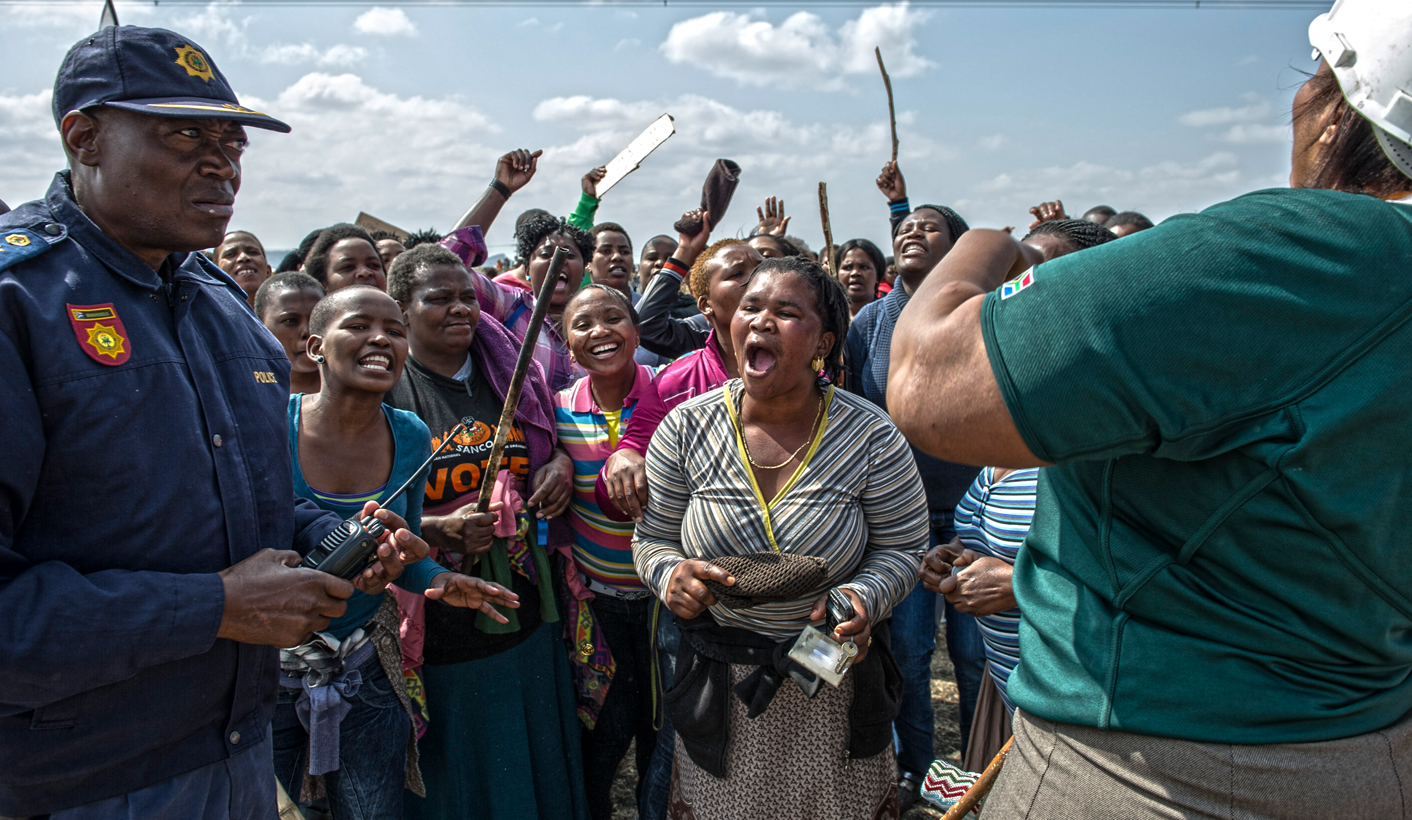 The death toll at Marikana rose to 46 after the death of an ANC councillor: Paulina Masuhlo was shot by rubber bullets on Saturday 15 Septemeber, while working at the beck and call of the ruling party she represented and died in hospital four days later. Cruel irony indeed. By MANDY DE WAAL.

On 19 August, Paulina Masuhlo’s face gestured defiantly from a photograph in a news report headlined “Police face community’s wrath”. Exactly a month later to the day, the ANC PR councillor is lying dead in the Phokeng mortuary.

Masuhlo was hit by rubber bullets fired by police on 15 September, not long after they conducted a night raid on miners’ hostel in Wonderkop village and shacks in Nkaneng, not far from the scene of the 16 August massacre.

“She was shot in the knee and bleeding badly, and was also shot in her abdomen. The knee was bad but the wound in her waist didn’t look so bad,” a Xhosa-speaking woman from Marikana told Thapelo Lekgowa, who helped Daily Maverick conduct the interview. This woman was standing next to Masuhlo when the ANC councillor and the group of women were fired on by police.

Masuhlo had been wounded earlier in the day when police entering the community looking for weapons fired tear gas. Later, on her way to the local spaza, Masuhlo stopped to talk with a group of women. “There was a Nyala that came towards us from the south east, and as it came it kicked up a lot of dust. And as the dust rose we couldn’t see anything, and the police fired.”

All in all, six women were injured by the hail of rubber bullets. The woman said that Masuhlo had lost a lot of blood from the wound in her knee after the shooting. “She was an ANC PR councillor who helped us and would hold meetings with us and report back to the ANC,” the woman, who asked not to be identified for fear of police reprisal, said.

The unidentified Marikana resident added that Masuhlo, who hailed from the Eastern Cape, was not married and lived with her siblings at Wonderkop village, and was the bread winner in her household. “Paulina was peaceful and very good at her job. She was a good-hearted person,” the woman said.

Responding to Masuhlo’s death, the Marikana Solidarity Campaign called for an immediate investigation into the death. In a statement, it called her “yet another victim of police brutality in Marikana”.

“We call on the Minister of Police to immediately initiate an urgent investigation into Paulina Masuhlo’s death and for the immediate identification and suspension of the police officers involved in her murder. Given what is known of the time and place of this attack this should not be difficult. Witnesses are available and willing to provide evidence if their safety can be guaranteed,” the statement read.

ANC spokesman Kenny Morolong said the ruling party was shocked to hear about the Masuhlo’s death, but warned people not to speculate about the cause. “We call on members of the public to desist from speculating on the cause of her death, as this can only be conclusively determined though a professional autopsy,” he said.

Samantha Hargreaves of the Marikana Solidarity Campaign said there was deep irony in Masuhlo’s death. “Here we have a local government that has failed to address the living circumstances of the population living there, and Paulina herself was a councillor who was rising up and working with the women. But she was shot by the government she represents. It is deeply ironic.”

The women of Marikana will take to the streets to protest Masuhlo’s death, demonstrate against police brutality and again call for justice on 22 September in a march that will depart Wonderkop, the main village adjacent to Lonmin mine, at 11AM.

A march organiser, who asked not to be named for fear of police victimisation, said the women had been hurt enough and were now “sick and tired” of the police brutality in Wonderkop.

“The events at Marikana are far from over; it is still the police again who are shooting the people. Even now people are being shot at, and there is a woman who has died after having been shot at by police without any reason,” she said.

The organiser said police continually enter the community to harass people, fire tear gas or randomly arrest people. “It is enough. This cannot go on,” she said. “Only women will march on Saturday. We will march from the Wonderkop community to the Marikana police station. We want to show the government our power because we know if this thing happened at Marikana it can happen anywhere else. We don’t want this ever to happen in South Africa again.”

The woman said the government was destroying the ANC. “The people in Wonderkop are members of the ANC, but now when things happen like this and we are afraid to join the ANC again, to be members of that organisation. NUM, the ANC and the police are related. All (President Jacob) Zuma wants from (Cosatu General Secretary Zwelinzima) Vavi are the next votes. We see him hugging Vavi on the TV, but he doesn’t care about this massacre here.”

The woman said the ANC was spreading rumours about women in the community being raped, so as to legitimise the police presence in Marikana. “The stories about women being raped here… it is a lie. It is a lie. The government is just defending NUM and defending Lonmin using the police. They don’t care about us.”

In an organising committee meeting held with then-striking Lonmin miners and the women of Wonderkop a few days earlier, Marikana Solidarity Campaign organiser Rehad Desai told the women of Wonderkop that ANC leadership had made allegations that their men were rapists. He said he had been speaking to ANC leaders who expressed the opinion that the men of Marikana were raping women and were completely out of control.

As Desai, an activist and filmmaker relayed his conversation to the Marikana crisis organising committee there were audible gasps and exclamations as women in the audience expressed shock and disgust. Desai also relayed how the ANC had referred to the people in the meeting as “uneducated, lumpenproletariat”.

“Those were in conversations that I had with some of the leadership with the ANC at the Cosatu’s National Congress in Midrand,” Desai said.  “If you look at the speech made by the SACP’s Blade Nzimande it refers to this sentiment. That these people are the lumpenproletariat, the backward primitive people who are forced to live by the mines, in a ‘wild west’ type situation. It is perceived that they have no discipline and no integrity. That’s the view of Blade Nzimande and this was repeated to me at the Cosatu conference, along with the question of women being raped and all the rest of that nonsense.”

Desai said this provided ANC leadership with the motivation to send in police and troops and establish a de facto state of emergency in Marikana. “There is a condescending attitude on the part of some of the ANC leadership to rural people and people who don’t have formal education levels. It is quite convenient for those sentiments to be expressed about these types of people to justify the crackdown and the shootings.

“This creates legitimacy for the state which is manned by the ruling party. What we have to ask ourselves is how transformed is this state? Is the government merely doing this work for the multinationals and the big corporations, as was done yesteryear in the bad old days of white supremacy?” Desai said.

ANC and government leaders find comparisons with the Apartheid regime vulgar. Still, in the microcosm that is Marikana the world is seeing the ANC through a new lens, as a former liberation movement reborn as a brutal oligarchy driven by self-serving elites that will stop at nothing to retain its grasp on power.

Not even if it means indiscriminately firing on its own people. Paula Masuhlo was a woman living her life peacefully, serving her country, her party and her community and ended being a random target. Her senseless death brings another dead character to the Marikana’s theatre of absurd. One can only hope the counter stops at 46. DM