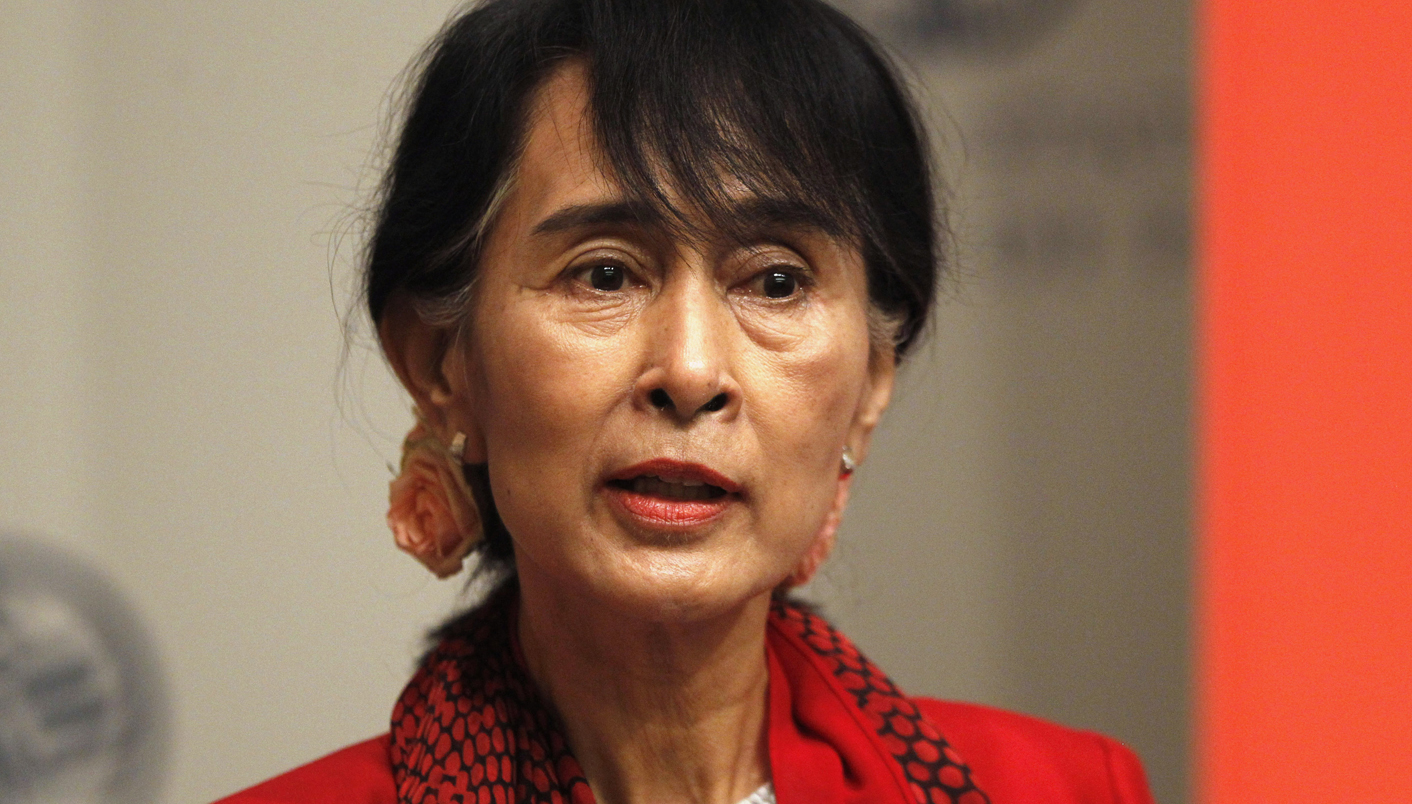 Myanmar opposition leader Aung San Suu Kyi warned on Tuesday that reforms in her country had cleared only the "first hurdle" and said she supported an easing of U.S. sanctions as part of a broad partnership with Washington. By Paul Eckert.

The Nobel laureate said the economic sanctions were a useful tool for putting pressure on Myanmar’s military government in the past, but now the people need to consolidate democracy without outside help.

“I do support the easing of sanctions, because I think that our people can start taking responsibility for their own destiny,” she said at the U.S. Institute of Peace in Washington on the opening day of a two-week tour of the United States.

“I do not think we should depend on U.S. sanctions to keep up the momentum of our movement to democracy. We have to work at it ourselves and there are very many other ways in which the United States can help us,” said Suu Kyi.

Suu Kyi did not specify which of the complex web of sanctions that Washington began phasing out this year she wanted removed. State Department officials did not indicate that she had made any formal requests on sanctions during talks on Tuesday with Secretary of State Hillary Clinton.

“We are going to do this in a measured way as we see progress, and the secretary did lay out the list (of what more needs to be done),” State Department spokeswoman Victoria Nuland told reporters after the meeting.

“We will continue to watch that and make our decisions as we see more progress,” she added.

Suu Kyi, who won the 1991 Nobel Peace Prize for championing democracy in opposition to a military junta that held her under house arrest for years, began her tour with talks with Clinton and a speech hosted by the USIP and the Asia Society.

“We have crossed the first hurdle but there are many more hurdles to cross,” she said in the speech, her first public appearance in the United States.

Clinton told the same event Myanmar still “had a lot of work to do.”

Suu Kyi’s followers and the quasi-civilian government needed to work together to heal past wounds and “guard against backsliding because there are forces that would take the country in the wrong direction if given the chance,” said Clinton.

She later visited the office of Radio Free Asia, a U.S.-funded broadcaster, and addressed the conflict between ethnic Rakhines and Muslim Rohingyas that in June erupted in violence that killed 80 people and displaced thousands.

Suu Kyi, whose last stay in the United States was in the 1970s as a United Nations employee, will visit the large emigre community from her country in Fort Wayne, Indiana, and make a series of public speeches from New York to California.

Her U.S. tour will coincide with a visit by Thein Sein, Myanmar’s reformist president, who heads to New York on Sept. 24 to address the U.N. General Assembly.

Thein Sein, a former junta general, was scheduled to meet U.S. officials on the sidelines of U.N. meetings and his aides said he would try to convey Myanmar’s urgent need for the import ban and other American sanctions to be eased.

Suu Kyi’s election to parliament in April helped to transform Myanmar’s pariah image and convince the West to begin rolling back sanctions after a year of dramatic reforms, including the release of about 700 political prisoners in amnesties between May 2011 and July.

The 67-year-old Suu Kyi, striking a professorial tone in her first U.S. speech, said the rapid normalization of U.S.-Myanmar ties over the past 18 months was “particularly illustrative of the dimensions of geopolitics and history.”

Many people around the region are asking, she said, whether U.S. engagement with Myanmar – a country of 64 million people that lies between China and India – “was aimed at containing the influence of China in Asia.”

She said Myanmar’s engagement with the United States did not mean that Myanmar-U.S. ties “in any way can be seen as a hostile threat to China” and that she sought good ties with both countries as well as with India.

Before Suu Kyi arrived in the United States on Monday, Myanmar announced a pardon of more than 500 prisoners in an amnesty that included at least 80 political detainees, according to activists.

The announcement, seen as a step that could strengthen the former military state’s growing bonds with Washington, did not make clear if any of the 514 were political prisoners, but two activist groups who monitor dissidents jailed in Myanmar said more than 80 were given presidential pardons.

The U.S. State Department reacted cautiously to news of the amnesty, repeating its call for the immediate and unconditional release of all political prisoners.

John Sifton, Asia advocacy director at Human Rights Watch, said he wanted to hear more from Suu Kyi about a looming showdown in the next election in 2015, which will determine whether the generals who have run the country since 1962 will peacefully hand over power to civilians.

“You can be a politician or you can be a human rights activist who speaks frankly, but I don’t think you can be both,” he said.

“The full and frank assessment of human rights groups is that she’s not prepared to play a very critical role with the government, nor does she speak the underlying truth about the political situation – the huge test that’s coming up in 2015,” added Sifton. DM

Photo: Myanmar opposition leader Aung San Suu Kyi speaks at the United States Institute of Peace in Washington, September 18, 2012. Suu Kyi opened a two-week tour of the U.S. on Tuesday with talks with Secretary of State Hillary Clinton in the latest step of a rapid normalization of U.S. ties with the former pariah state. REUTERS/Jason Reed