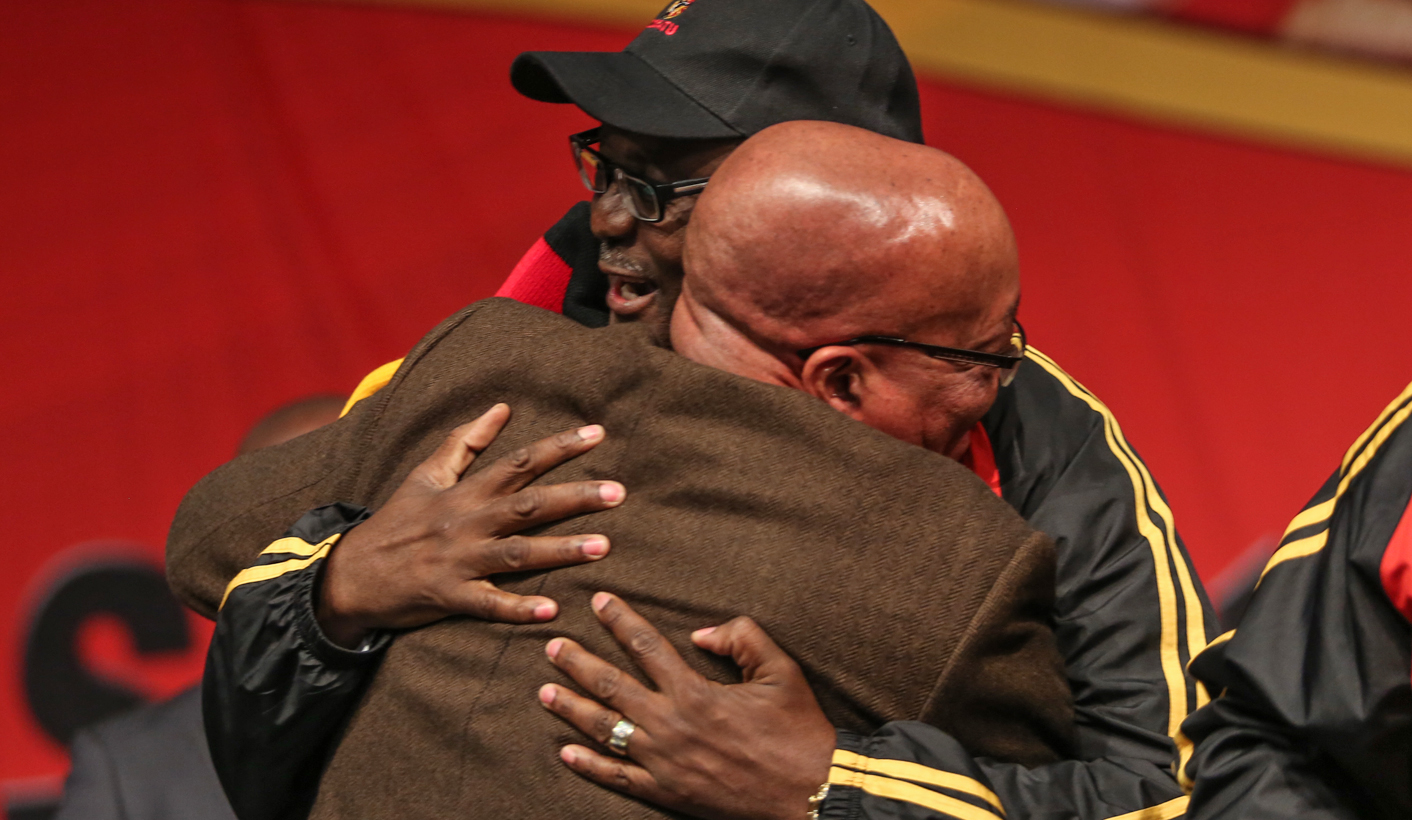 The Cosatu congress on Monday unanimously adopted a special declaration on the events at Marikana, with changes proposed by the ANC to soften criticism of the police brutality. The declaration is now being “cleaned up” to shelter and appease the people in the conference hall, rather than the community of Marikana, who remain in a hopeless position. By RANJENI MUNUSAMY.

According to the ANC, the SACP and now Cosatu, the victims of the Marikana tragedy are not the people who were shot and killed by the police. No, according to the ruling alliance, the victims who need to be protected and defended are in the National Union of Mineworkers (NUM), which is apparently under attack from “counter-revolutionaries”. And never mind the wretched people of Marikana; the brutality they suffer needs to be understood “in context”.

When Cosatu announced that it would be adopting a special declaration at its national congress on the Marikana mine tragedy, it appeared that the trade union federation had finally acknowledged that its response to the massacre was inadequate. It looked as if Cosatu would now be stepping up to play a meaningful role to resolve the impasse at the Lonmin mine following the protracted strike, and that a strategy would now be in place to deal with the growing crisis in the mining sector.

But that was not what the seven-page declaration turned out to be about. Instead, it is an elaborate face-saving exercise on behalf of the NUM, which has been rejected by striking mineworkers at Marikana, and is now scrambling to defend its dominance in the mining sector.

And while the declaration originally did condemn police brutality, the ANC pushed Cosatu to change the wording so that the state was not blamed for the massacre. The declaration is now being “massaged” to take the heat off the police and place more focus on the role of mining companies and “counter-revolutionaries”.

Proposing the declaration to Cosatu’s 11th National Congress meeting in Midrand this week, the federation’s general secretary Zwelinzima Vavi explained that leaders from all Cosatu’s unions met last Thursday and decided that there should be a special statement on the Marikana tragedy. The general secretaries of NUM, metalworkers union Numsa, the National Education, Health and Allied Workers Union (Nehawu) and SA Democratic Teachers Union (Sadtu), together with Vavi, were tasked with developing the declaration.

Vavi read the lengthy declaration to the congress in order that it be discussed and adopted. The declaration stated that Cosatu declared its solidarity “with all the working class communities in the affected areas whose lives have been shattered by the ongoing violent disputes in the mines”. It said Cosatu wanted to see “real peace and stability return to the affected mines through finding a just solution to the violent crisis”.

After giving an extensive background of the historic factors which led to South Africa’s current economic problems, the global financial crisis, the inequalities in the mining industry and how much the NUM has done in the sector over the past 30 years, the declaration made six proposals. Among these was that a clear message should be sent to mineworkers that “while breaking out of the NUM’s fold might appear to bring short-term gains to some workers, in the long run it will weaken the power of mineworkers”.

The declaration made “a strong appeal to any NUM member who has a genuine grievance against the union to channel this through the union, or via Cosatu if necessary”. In addition to the second commission of inquiry, a “federation-wide solidarity campaign for the complete transformation of the industry” was also proposed.

While Vavi was reading the declaration, there were murmured discussions among the high-profile ANC delegates, including between the secretary general Gwede Mantashe and police minister Nathi Mthethwa. Sections of the declaration pertaining to the actions of the police at Marikana formed the major issue of concern to the ANC.

One of the sentences in the declaration read: “We repeat our statements of abhorrence of the use of brute force by the police against workers in all labour disputes, and we renew our call for the demilitarisation of the SAPS”.

Speaking during the discussion session on the declaration, Mantashe said the ANC was of the view that the document was “very weak in describing the situation, not only in Marikana, but other mines around Rustenburg”. He said the declaration seemed to be emphasising the events on 16 August when 34 mineworkers were killed, but not the 10 people who died in the run-up to the massacre and after it. Mantashe said these killings were specifically targeting NUM shop stewards.

He said the description of the actions of the police as “brute force” should be put in context. While the police should not use “undue” force, Mantashe said, the word “brutal” could not be used to describe what happened at Marikana. He said the actions of the Lonmin mine reflected the “extreme brutality of capital”, and that is what the declaration should emphasise.

“If we are soft on capital on this matter, we run [the] risk of shifting all blame onto the state,” Mantashe said, proposing that Cosatu “rework” the declaration. His proposal received applause from the congress delegates. It is not yet known if the reworded version will include support for the security services crackdown at Marikana announced by government last week. In his speech to the congress, SACP general secretary Blade Nzimande urged Cosatu to rally behind the security intervention aimed at disarming the workers and curbing the violence.

NUM general secretary Frans Baleni told the congress that the union appreciated the “support and solidarity” of the Cosatu leadership and the federation’s affiliates during its “trying times”. “We also appreciate the support in defence of NUM by the SACP and the ANC,” Baleni said.

He said his union had no objections to the proposals to “clean up” the declaration and to “massage the wording around the police”.

Asked by Daily Maverick why he had objected to the wording of the declaration, Mthethwa said he was concerned that incidents before and after the Marikana massacre were not being taken into account. He was referring to the murder of 10 people, including two policemen, before the massacre and the killing of a NUM shop steward recently. It appears that government and the ANC want to continue to use these incidents as justification for the police’s actions on 16 August and the pseudo state of emergency now in place at Marikana.

Mthethwa said the use of the words “brute force” created the wrong impression of what took place at Marikana and the “context” of the police actions was important. He said he was pleased that the Cosatu congress agreed to change the wording.

Vavi told Daily Maverick that the new version of the declaration would be presented to the congress on Tuesday. Asked why the declaration did not mention assisting the people of Marikana or a strategy to deal with the mining crisis, Vavi said it did not spell out a “detailed programme of action” and this would still be worked out.

“Through the declaration, we want to tell the workers ‘We are your champions’,” Vavi said.

Hopefully the people of Marikana will never get to read the Cosatu declaration, as they might get the impression that the most powerful voice of organised workers in South Africa bowed to pressure and sold them out in order to protect its own. They also have a completely different understanding of the term “brute force” based on their experiences in the past two months. Their “context” is very different to that of the people gathered at Gallagher Estate this week. DM