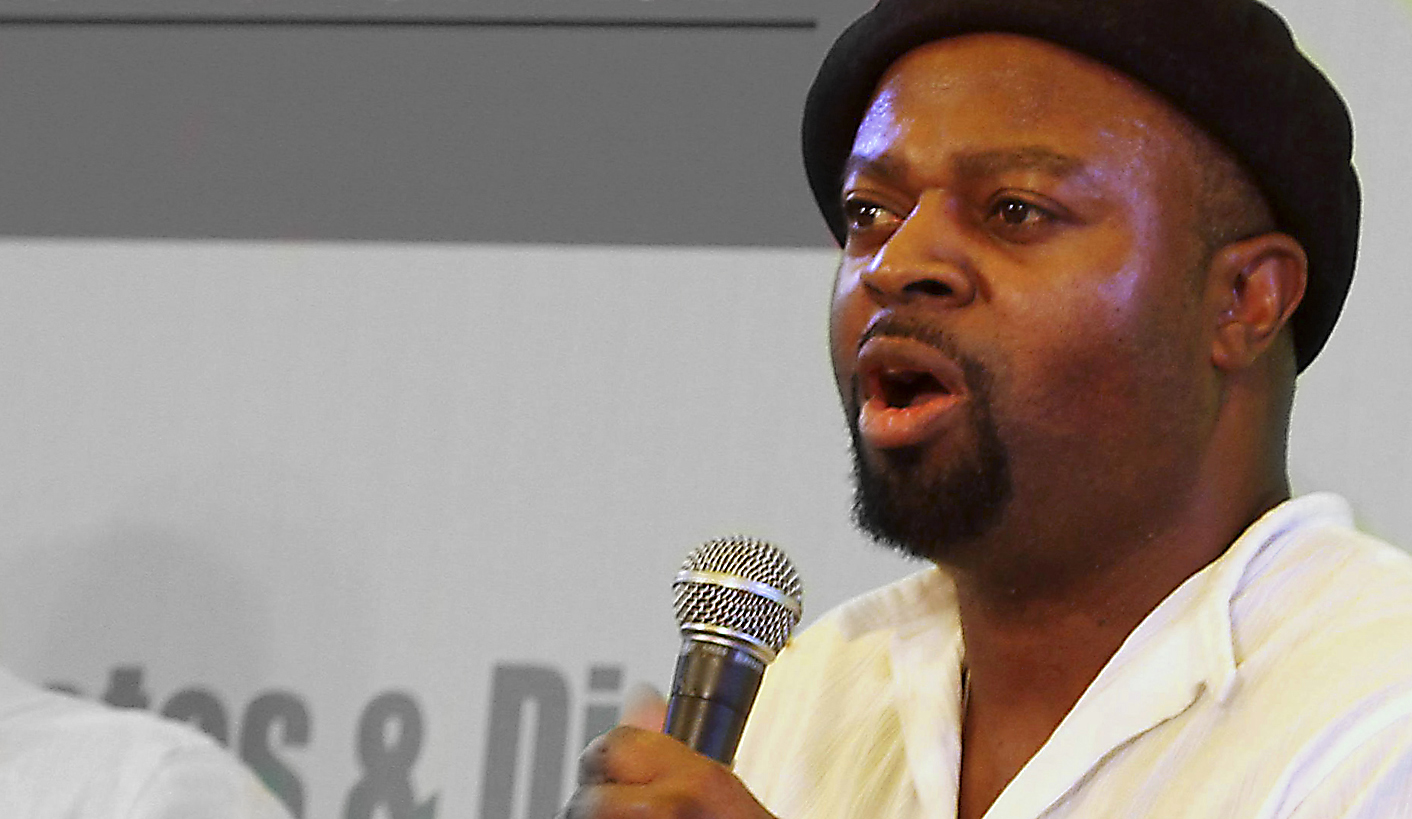 Nigerian author Ben Okri was chosen to deliver UCT’s 13th annual Steve Biko lecture on Wednesday night, and the award-winning poet and novelist gave a compelling address. Some might have hoped for a more hard-hitting presentation at a moment of national upheaval, but the sheer seductiveness of Okri’s oratory made that easy to forgive. By REBECCA DAVIS.

There are some writers who come across as engaging and easy in prose, but in the flesh appear stumbling, awkward and dry. Ben Okri is not one of those. Managing to rock a beret in a way Juju could only dream of, Okri utterly charmed a packed audience at UCT’s Jameson Hall on Wednesday night. A friend commented after his address: “I was eating out of his hand. And I’d give it a Michelin star.”

The occasion was UCT’s annual Steve Biko Memorial Lecture, which routinely manages to bag a big-name speaker. In the past these have included a star-studded roster of African writers – Ngugi wa Thiong’o, Chinua Achebe and Zakes Mda have all previously appeared on the lectern – so in some ways Okri was, if anything, overdue.

The criteria used to select the annual Biko speaker seem quite hard to discern. The speaker’s job is to “commemorate the life and death of Biko”, but the rest seems left pretty open. Last year’s speaker was ideally equipped to speak expertly on the subject of Steve Biko, since Sydney Kentridge represented Biko’s family at the inquest into his death. While Ben Okri’s address lionised Biko and stirringly invoked the need for identity pride and an African re-birth, Okri revealed himself to be a little shaky on a few South Africa-specific matters. There was some mixing up of Struggle dates, a reference to the “Cape of Wise Hope”, and a mention of the “KwaZulu” people.

But it seems churlish to even mention these slips; so lyrical, rousing and goodhearted was Okri’s address. It’s fair to say, however, that if the audience had arrived hungry for ways to make new meanings of current national strife – the mining labour meltdown, service delivery protests, Malema having the ear of disgruntled soldiers – they might have left unsatisfied. Okri’s writing draws on esoteric strands – Yoruba folklore, the spirit realm, magic realism – and the critiques he offered of the political status quo were generally metaphor-draped and veiled.

He did make mention of Marikana, however, saying that he believed Biko would have expressed concern over the police shootings. “The use of Apartheid laws to try the miners is shocking to the international community and has disturbing resonances with [Biko’s] own death,” Okri said. This was one step ahead of Biko Foundation CEO Nkosinathi Biko, who in his prefatory remarks said that the timing of Okri’s visit was important because it offered an opportunity to “reflect on recent developments which have tested the maturity of our democracy”. The most testing challenge of all to our democracy, he said, was The Spear saga. I’ll wager most of the audience would’ve gone with recent events at Marikana over The Spear, but each to their own.

Okri paid tribute to the anti-Apartheid struggle, speaking movingly about how it had inspired generations of Africans. Calling the Struggle “the background to our lives”, he said that the very existence of South Africa’s Apartheid state when he was growing up “posed questions that went right to the heart of injustice, and made us question the existence of God Himself”. Sharpeville, he said, “awoke us from our moral sleep”, and the voice which pierced their minds and consciences was that of Steve Biko, murdered 35 years ago to a day.

But if Biko were here today, Okri said, he would be asking difficult questions. Questions like: Is the society just? Are we being truthful about one another? Has there been a change of attitudes and assumptions on both sides of the racial divide? Or, more pessimistically, “Has there been reconciliation without proper consideration? Have the things he fought about merely mutated like cancerous cells?” Perhaps, Okri suggested, Biko would look around him today and find that “too much has been given away too soon”.  The difficulty is that “generosity without steel can be a weak thing, and steel without generosity can be cruel”.

Okri said that for most of his life it seemed unthinkable that Apartheid would ever be overcome. “It seemed like an unalterable fact, like fate, or the moon, or hunger.” But Apartheid was ended, and with that ending comes new challenges. Okri invoked the metaphor of Apartheid as a long, nightmare-laden sleep, and the democratic era as a new day. “With awakening, a new question is posed. The nightmare is over, but what do we do with the day?” People go about healing in different ways, he said. For some, healing is “probing the wounds, seeking causes and redress”. For others, “healing is dreaming…a chance to transform themselves out of all that trauma”. It was clear which one he advocated as superior.

His rhetoric was invigorating, an exhortation for self-discovery, self-improvement, an end to complacency or entitlement – these are the lessons Okri takes from Black Consciousness. “No one will hand us the destiny that we want,” Okri said. “Courage and ingenuity and toughness are required much more for the days of sunlight…Freedom was just the overture. Freedom may turn out to be a very small part of the story of a people. The real story begins with what they did with that freedom.”

And that freedom, Okri suggested, has not always been well-spent. “One might say that African nations began with hope, fell into chaos and staggered into dependency,” he said. “African nations came, saw and squandered.” Mistakes have been made continent-wide, he said: dictatorship and tyranny; corruption as part of the fabric of everyday life; a depletion of natural resources by those at the top; the erosion of civil liberties; and “a failure to realise that nations can die like companies or individuals”.

If Biko were here, his cry today would be for Africa to get its house in order, Okri suggested. Black Consciousness demands that people take responsibility for their lives, including their choice of leadership. “The leaders that you have say something about the kind of people that you are,” Okri said, which caused a ripple around the room. “Black Consciousness demands that we blame or praise ourselves for our leaders because we have enabled what they become.”

The title of Okri’s talk was “Biko and the Tough Alchemy of Africa”, by which he meant the process of transforming society. There are two ways to do this, Okri said: the dry way and the wet way. The dry way is “short and dangerous”, and involves varying degrees of dictatorship, a unified people and a focused vision, as was attempted unsuccessfully in the Soviet Union. The wet way is “long and safe”. After all, he said, “America needed two hundred years and a civil war to become itself”; the suggestion was that Africa, too, needs time. “Let us be tempered,” he said. “Let black learn from white and white learn from black.”

In conclusion, Okri brought it back to the South African man whose memory he was there to honour, and his “martyr’s immolation” 35 years ago. But Okri’s fundamental call was pan-African: for the overhaul of Africa’s self-image, and the necessity of re-writing Africa’s future in aspirational terms rather than conforming to “the Africa they write about”.

“Our future is greater than our past,” he concluded, to a standing ovation. “Bless you all.” DM