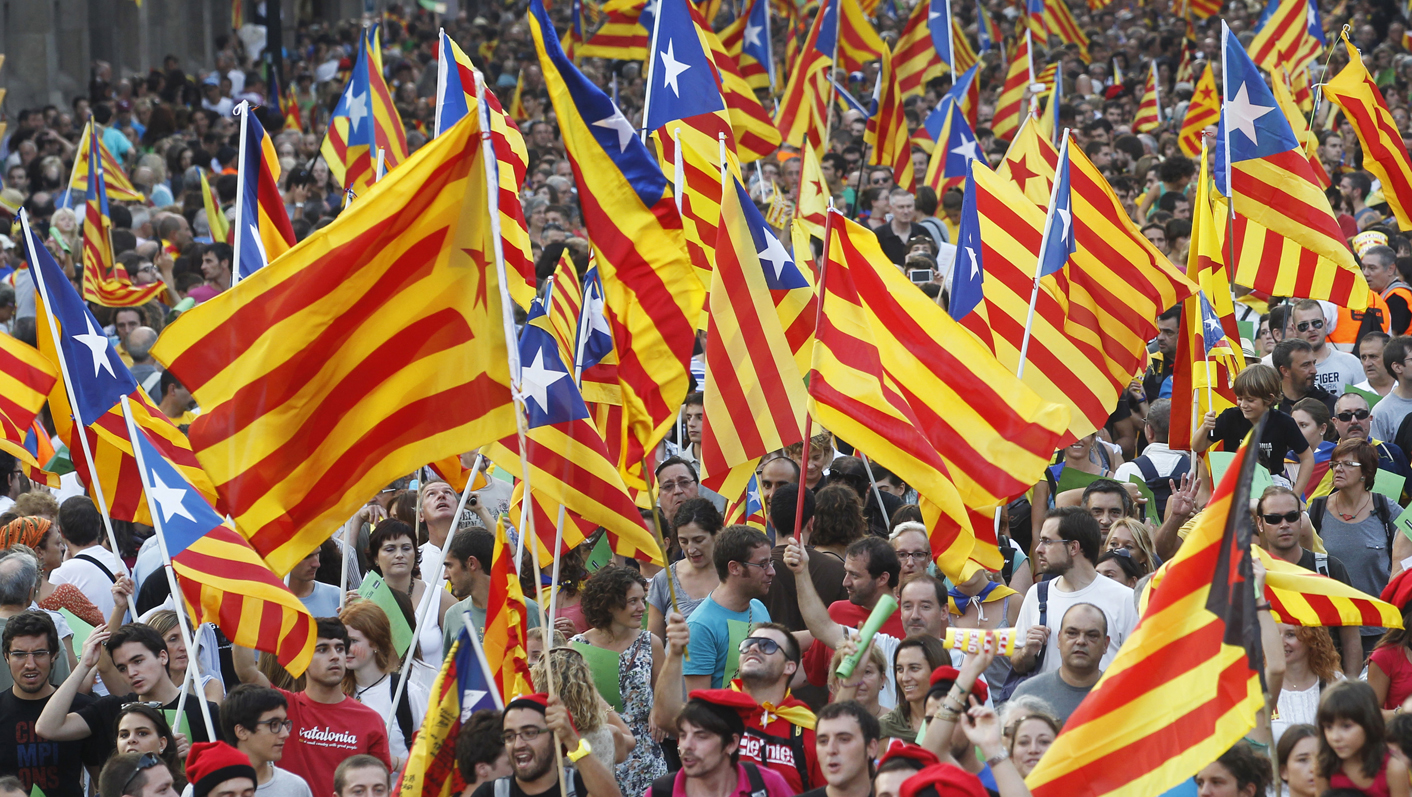 BARCELONA, Spain, Sept 11 (Reuters) - Hundreds of thousands of Catalans took to the streets of Barcelona on Tuesday in an unprecedented show of mass support for autonomy from Madrid, blaming Spain's economic crisis for dragging their wealthy region down. By Andros Gonzalez.

Surging unemployment and financial disarray have stoked a fever of separatism in Catalonia, a comparatively prosperous part of Spain whose leaders say their wealth is being sucked dry by the central government.

Crowds waved red and yellow striped Catalan flags – one of the oldest still in use in Europe – and sang the Catalan anthem on a national day marking the conquest of Catalonia by Spain’s King Philip V in 1714 after a 13 month siege of Barcelona.

The central government said the crowd was 600,000 strong. Catalan police gave figures as high as 1.5 million.

Marchers said the sheer size of the crowd – swollen with people from around the region who descended on its capital in bright sunshine – would at last make Madrid hear their message.

“This is a blow for the government. People like me came from everywhere. I don’t think they were expecting something as big,” said 53-years-old Teresa Cabanes, who came from Santa Coloma de Gramanet, in the outskirts of Barcelona, to march.

“We feel that the central government is fooling with us. We Catalans are giving away a lot of money to Spain.”

They held up banners and signs saying “No to the Fourth Reich”, “No to Europe”, “Independence Now!” and “Catalonia: the New European State”.

The huge volume of people overwhelmed the mobile phone network, which shut down for hours under the strain. Marchers who had attended Catalan national day rallies for decades, including others that attracted hundreds of thousands, said this was the biggest they could recall.

The march ended after nightfall without any incident and no people were arrested, police said.

The show of anger and ethnic pride will play into the hands of regional authorities who are trying to force the central government to yield control over taxes raised in Catalonia.

Catalans speak a language similar to, but distinct from, the Castillian Spanish spoken in the rest of Spain. The region accounts for 15 percent of Spain’s population but 20 percent of its economy.

With Spain’s economy in freefall from the euro zone debt crisis, Catalans complain of paying billions of euros more in taxes than they receive back from Madrid, even as their regional government has been forced to fire workers and cut services.

The region’s president, Artur Mas, has suggested he could seek independence if he is not given more control over tax raised from Catalonia.

“If we cannot reach a financial agreement, the road to freedom for Catalonia is open,” he repeated on Tuesday. Mas did not attend the march but said he backed it in spirit.

The annual Diada holiday is typically commemorated with a fiesta in the Catalan capital with song, dance and a floral offering to Rafael Casanova, a hero of the siege.

But the outpouring on Tuesday was a sign that the economic crisis has transformed issues of cultural identity into a mainstream political movement bent on autonomy. A poll by the regional government in July showed for the first time that more than half of Catalonia’s population favours independence.

For Mas and his nationalist Convergence and Union party (CiU), that translates into demands for control over tax.

When Spain returned to democracy in the mid-1970s, regions such as Catalonia and the Basque Country saw a vibrant resurgence of their culture and languages that had been crushed during the dictatorship of Francisco Franco.

Catalonia has long sought more autonomy, though without a violent separatist movement like the Basque Country’s ETA.

Economists calculate Catalans pay at least 12 billion euros more in taxes per year to Madrid than they receive back for services like schools and hospitals. Many Catalans say the figure – difficult to calculate because of a complex system of transfers – is even higher, up to 16 billion.

“A lot of people who were not into independence are more and more into it now,” said Elvira Farre, a retired secretary from Barcelona. “They are being driven into it by their feelings but also by their wallets.”

Government worker Jauma Turra said: “It’s like a marriage you can’t put up with any more.”

The Madrid government took a dim view of what leaders there saw as Mas’s stirring up Catalans ahead of the march.

“Catalonia has serious deficit and employment problems and this is not the moment for messing around or disputes or controversy,” Prime Minister Mariano Rajoy of the conservative People’s Party said on Monday.

Many Catalans are suspicious of what they see as the centralising aims of the People’s Party.

Although Catalonia’s unemployment is somewhat lower than Spain’s as a whole – 22 percent instead of more than 24 percent – the region has suffered badly due to the Spanish debt crisis.

There are 700,000 jobless in Catalonia. The government cannot borrow from financial markets to pay bills because, like other Spanish regions, it saw its debt downgraded to junk.

Catalonia was among the first of Spain’s 17 autonomous regions to start making budget cuts to its public services in 2010 and cuts have grown deeper, with civil servant pay cuts causing a public backlash in recent months.

Despite his austerity drive, Mas has managed to deflect fury over his region’s economic problems onto the central government, saying if the tax system were set up differently Catalonia would not be in its quagmire.

He has proposed a “fiscal pact” that would give Catalonia its own tax authority. He is scheduled to meet Rajoy on Sept 20 to discuss it, but Rajoy is expected to reject it.

“It’s part of a political game that has been going on for years. The only difference is that the crisis has changed the stakes,” said Antonio Barroso, political analyst with Eurasia Group consulting firm.

Catalans were particularly galled when the central government raised the value-added tax across Spain from Sept 1, but said it would not pass the extra revenue to the regions.

Catalonia has already had to tap billions of euros in emergency central government funds this year to catch up on months of back payments to service providers.

Mas says he now needs another 5.7 billion euros to pay maturing debt, but the possibility that the central government would demand more say in local finances in exchange for the aid is adding to anger in the province.

If he meets the expected resistance from Rajoy on the fiscal pact, Mas is expected to call early elections to try to win an absolute majority in the regional parliament, where he currently governs through alliances with other parties. He could use such wider backing to press Madrid for more autonomy. DM

Photo: Marchers wave Catalonian nationalist flags as they demonstrate during Catalan National Day in Barcelona September 11, 2012. Demonstrators from across the region, some urging full independence, others calling for more autonomy from Madrid, marched on Tuesday under the slogan “Catalonia, a new European state.” REUTERS/Albert Gea