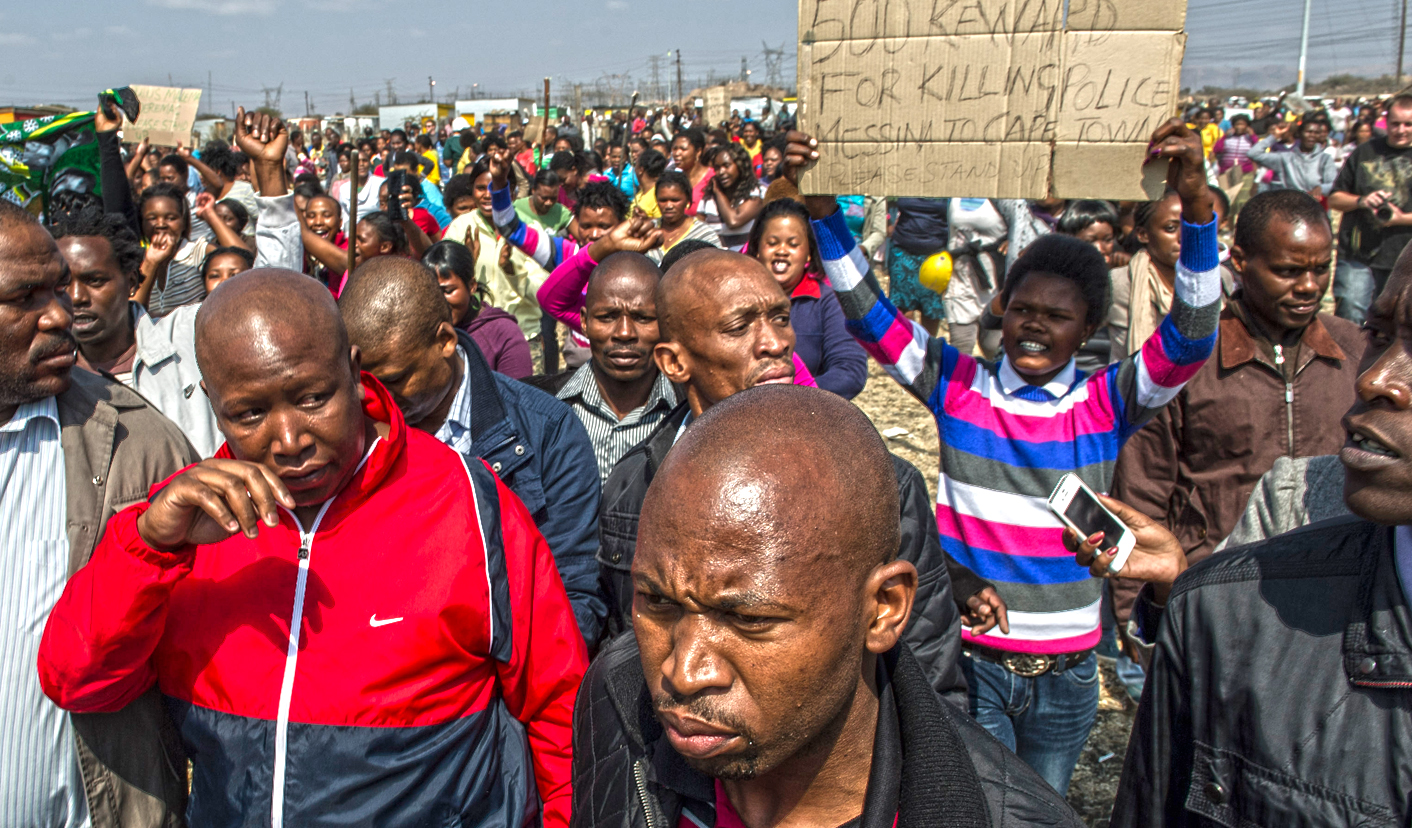 South Africa is a land where any bizarre conspiracy theory can flourish with the help of state intelligence agents at the behest of their political masters. Instead of trying to stave off crime and social unrest, police intelligence agents are trying to mop up the scene of the massacre at Marikana and are desperate to find evidence linking Julius Malema to the violence. Malema, meanwhile, is telling the world how he intends pushing SA over the edge. By RANJENI MUNUSAMY.

As if the Marikana saga were not already murky enough, disgraced police crime intelligence operatives are now in the mix, allegedly on a mission to prove that expelled ANC Youth League president Julius Malema incited the Lonmin mineworkers to embark on violent protests. City Press has reported that a covert crime intelligence team used torture methods to extract information from mineworkers who had been jailed for three weeks after the Marikana massacre on 16 August.

The paper reported that Colonel Nkosana “Killer” Ximba, a close associate of former police crime intelligence boss Richard Mdluli, used the information gleaned from the workers to claim to his bosses that Malema had stoked the violence before the massacre. This provoked an investigation by the State Security Agency to conduct further investigations, but so far they have been unable to verify the claims.

The Daily Maverick has also revealed that the Small Koppie, where a number of bodies of the mineworkers were found, was defaced last week, during a time when police were at the scene. Police sources claim crime intelligence was mandated to “mop up” the scene owing to it becoming “a playground” for journalists constantly filming and taking pictures to illustrate what might have happened at Small Koppie.

The police and their political bosses are desperate to back up their claims that the Tactical Response Unit acted in self-defence on the day of the massacre and were justified in using live ammunition. They are under further pressure to invalidate investigative reports, such as those conducted by Daily Maverick, showing that they pursued and shot the mineworkers at close range and that they drove over them with police combat vehicles.

But now there are also political conspiracies at play, including a theory that Malema engineered the situation to create instability in the mining sector to further his campaign to nationalise the mines. (Even for those who loathe Malema, however, it would be difficult to find compelling evidence that he deliberately stoked the violence to provoke a confrontation with the police that would lead to the crisis at Marikana – the same crisis that has now spilt over to others’ mines – in order to create instability in the mining sector.) According to the conspiracy theory, that this would finally all lead to mining investors and shareholders becoming jittery and willing to dump their lucrative assets onto the state, thus achieving Malema’s ultimate goal to nationalise the mines.

Such a theory, flimsy as it is, might find resonance in factions of the ANC in the pre-Mangaung environment – particularly in the anti-nationalisation, pro-Zuma lobby. But it is highly unlikely that it would be able to stand up in front of the Farlam Commission of Inquiry into the Marikana massacre.

Floyd Shivambu, Malema’s former spokesman in the ANC Youth League who was also expelled from the ANC, says while the Lonmin workers asked for the intervention before the massacre, they only went to Marikana the day after the massacre to offer assistance in the wake of the tragedy. They have since been in constant contact with the community and the striking workers.

Shivambu says anyone who tries to prove that they were involved in the pre-massacre violence, when 10 people including two policemen were killed, would make “a fool of himself”. But Malema and his supporters did capitalise on the upheaval at Marikana, and used it as a launch pad for a rebellion in the mining sector.

After Malema was embraced by the Lonmin workers, he embarked on a roadshow to other mines, whipping up disgruntled mineworkers and using these platforms to condemn government and particularly Zuma. Yesterday the roadshow took on a new dimension when Malema addressed thousands of striking miners at Gold Fields’ KDC mine in Carletonville, west of Johannesburg.

Malema called for a national strike, five days every month, and to make the mines “ungovernable” through peaceful means until their R12,500 wage demand was met. He slammed the general secretary of the National Union of Mineworkers, Frans Baleni, claiming he made a million every year just from sitting on the boards of mines. He also claimed Zuma was being funded by mine bosses.

On Tuesday night, Malema appeared on Christiane Amanpour’s current affairs show on CNN, which focused on the disruption in South Africa’s mining sector. Amanpour introduced the topic by saying that South Africa’s “hopes and dreams seem to be coming apart at the seams” after the Marikana massacre. She said Malema was a “harsh critic” of government and had become “the face of this crisis” who had “stepped into the leadership void”.

She asked Malema why he had “inserted” himself into the “violent and difficult situation”. Malema, dressed in ANC regalia, said the Youth League had taken a decision that mines should be nationalised and the wealth of the country had to be shared.

Asked about the national strike he had advocated for earlier in the day, Malema announced to the world: “The strikes in the different mines would have to be co-ordinated every month… the action will go on for five working days.” He said a “national programme needed to be rolled out” and he would be announcing a “day of action” to kick off the strike(s).

Malema also said he would be meeting aggrieved members of the South African National Defence Force to “listen to their cries and demands”. He told Amanpour that South Africa had reached a stage where “enough is enough”.

Shivambu confirmed the meeting with soldiers late on Tuesday. “The address is as a result of requests sent by the armed forces to Malema to come and listen to their cries and demands,” he said in a statement.

Shivambu said the soldiers’ complaints included being threatened with dismissal, and low salaries. “Malema will listen to their demands and suggest solutions to end the unnecessary starvation and threats of dismissals to the soldiers.”

Military bases were placed on high alert last night as a result.

While Malema is communicating to the world that South Africa is at a breaking point, it remains to be seen whether the crisis being precipitated in the mining sector will in fact advance the nationalisation campaign. Political analyst Ebrahim Fakir says Malema’s mining roadshow is more about revitalising his political relevance and revenge.

“This is about his own personal survival and retribution. He is basically punishing Zuma for expelling him from the ANC,” Fakir said. He said Malema was also possibly being used by people in the ANC who had interests in mines and who were desperate for government bailouts through the vehicle of nationalisation. Others could also be using him for political purposes to attack Zuma and others on their behalf in the context of the succession battle.

He said there was little logic that the upheavals would help the nationalisation cause as the mines paralysed by strike action would be so damaged that they would be more of a burden to the state if their owners decided to surrender them.

But others say that the unintended consequence of the Marikana massacre may be that it sparks a revolution in a sector where worker discontent is rife. “Like with Sharpeville and June 16, sometimes tragic events with mass deaths spur people into mass action. I don’t think there was a conspiracy which started this, but the conditions can now set off a revolution,” said one ANC strategist.

Conspiracy or not, Malema is now on a mission to fuel a rebellion. While the mining industry and the markets would be jittery about his threat of rolling strike action, it is unlikely that mine owners would take fright and simply hand over their mines to be nationalised. Nationalisation is not yet a policy of the ANC or the government, and can only become so if adopted by the ANC national conference in December.

If you didn’t know it yet, all roads lead to Mangaung – even the Malema highway to hell. DM

Photo: One of the women at Wonderkop holds up a sign behind Julius Malema offering a reward for the killing policemen from Messina to Cape Town. The community had gathered to have a meeting to discuss the deaths of 34 of their colleagues two days previously. They were addressed by strike leaders and the expelled African National Congress youth league leader Julius Malema. Malema attacked President Zuma and asked for his removal, as well as that of police minister Nathi Mtetwa.  Wonderkop, Marikana, North West Province. August 18, 2012. (Greg Marinovich)