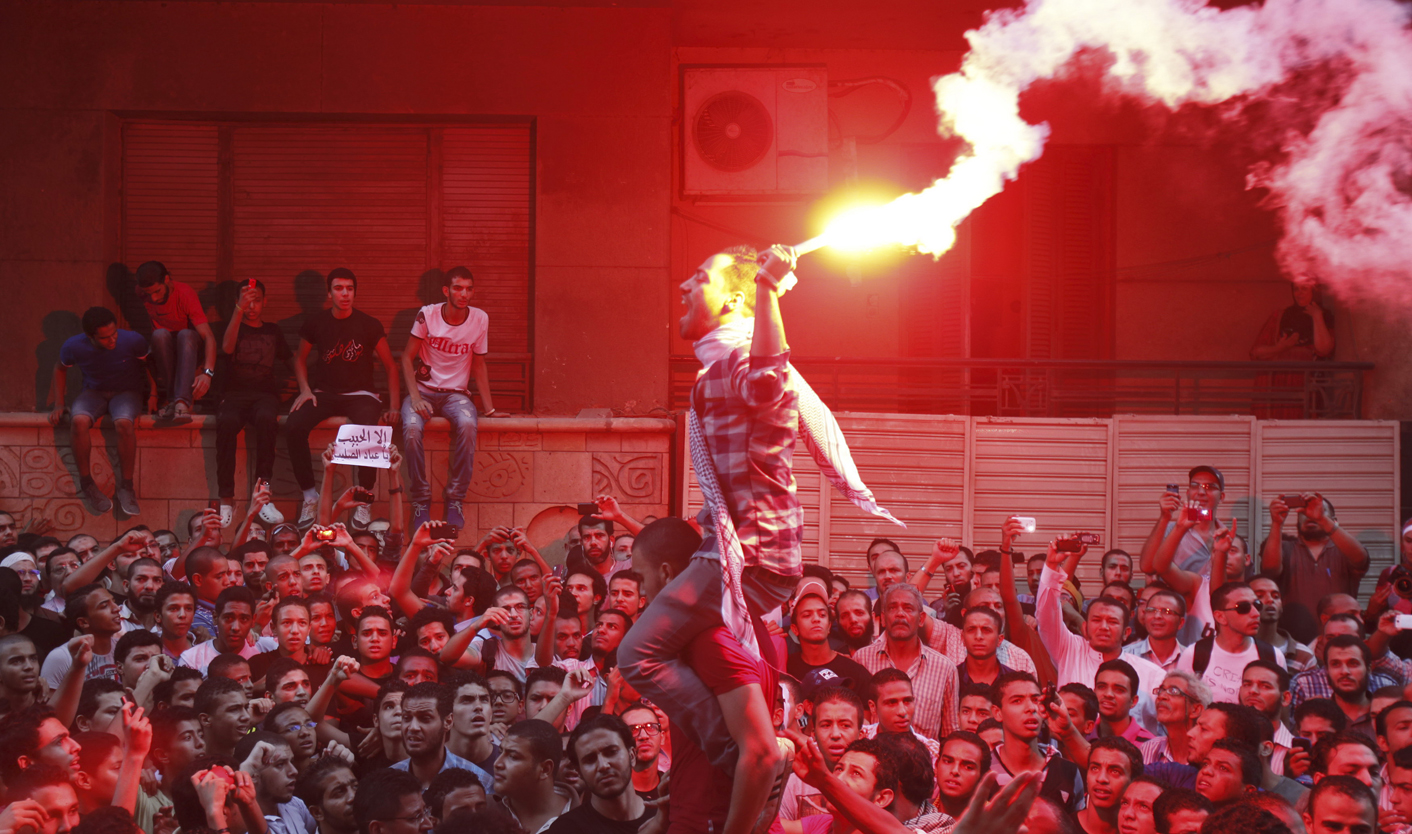 Egyptian protesters scaled the walls of the U.S. embassy on Tuesday, tore down the American flag and burned it during a protest over what they said was a film being produced in the United States that insulted Prophet Mohammad. By Tamim Elyan.

In place of the U.S. flag, the protesters tried to raise a black flag with the words “There is no God but God, and Mohammad is his messenger”, a Reuters witness said.

Once the U.S. flag was hauled down, some protesters tore it up and showed off pieces to television cameras. Others burned the remains outside the fortress-like embassy building in central Cairo. But some protesters objected to the flag burning.

Many Muslims consider any depiction of the Prophet to be offensive.

“This movie must be banned immediately and an apology should be made,” said 19-year-old Ismail Mahmoud, a member of the so-called “ultras” soccer supporters who played a big role in the uprising that brought down Hosni Mubarak last year.

He called on President Mohamed Mursi, Egypt’s first civilian president and an Islamist, to take action, without giving details of the film that angered him or other protesters.

About 20 people stood on top of the embassy wall, while about 2,000 protesters gathered outside. The demonstrators were mainly supporters of Islamist groups or “ultras” youths.

Rafik Farouk, 38, an Egyptian Christian, also took part. “I am here because I am Egyptian and reject anything that insults Islam or anything that sparks division in Egypt,” he said.

Washington has a big mission in Egypt, partly because of a huge aid programme that followed Egypt’s signing of a peace treaty with Israel in 1979. The United States gives $1.3 billion to Egypt’s military each year and offers the nation other aid.

“We are obviously working with Egyptian security to try to restore order at the embassy and to work with them to try to get the situation under control,” she said.

Following the protest, Egypt’s Foreign Ministry said it was committed to giving all embassies the necessary protection.

The U.S. embassy had put out a statement earlier on Tuesday condemning “misguided individuals” who hurt the religious feelings of Muslims or followers of other religions.

“We firmly reject the actions by those who abuse the universal right of free speech to hurt the religious beliefs of others,” the U.S. embassy said in its statement.

Although it was not clear which film prompted the protests, Egypt’s prestigious Al-Azhar mosque and seat of Sunni learning condemned on Tuesday a symbolic “trial” of the Prophet organised by a U.S. group including Terry Jones, a Christian pastor who triggered riots in Afghanistan in 2010 by threatening to burn the Koran.

According to the website www.standupamericanow.org, Jones and others were due to take part in an event on Tuesday – the anniversary of the Sept. 11 attacks by al Qaeda on U.S. cities – called “International Judge Mohammad Day” in Florida. It was due to be carried live on the Internet.

Some activists had mentioned Jones in calls for a protest.

Egypt’s Coptic Orthodox church also condemned in a statement some Copts living abroad who it said financed “the production of a film insulting Prophet Mohammad”, a state website reported. About a 10th of Egypt’s 83 million people are Christians.

Protests have become a common feature in Egypt since the uprising that ousted long-time U.S.-ally Mubarak. When U.S. Secretary of State Hillary Clinton visited in July, after Mursi was sworn in, her motorcade was pelted with tomatoes.

Some demonstrators shouted slogans against her and some slogans were against Islamists, reflecting perceptions of some opponents of Islamists who have swept Egypt’s presidency and a parliamentary vote that Washington helped Islamists to power.

One slogan scrawled on the walls of the embassy, which is near Tahrir Square where Egyptians revolted against Mubarak, said: “If your freedom of speech has no limits, may you accept our freedom of action.”

In another incident prompted by similar religious sentiments last month, a lone man attacked the German embassy with homemade nail bombs and a hammer, cracking glass at the entrance, after he read a report about a protest in Germany where demonstrators paraded caricatures of the Prophet outside a mosque.

No one was injured and there was no serious damage to the embassy during the incident. DM

Photo: People shout slogans and light flares in front of the U.S. embassy during a protest against what they said was a film being produced in the United States that was insulting to the Prophet Mohammad, in Cairo September 11, 2012. Egyptian protesters scaled the walls of the U.S. embassy in Cairo on Tuesday and some pulled down the American flag during the protest, witnesses said. REUTERS/Amr Abdallah Dalsh