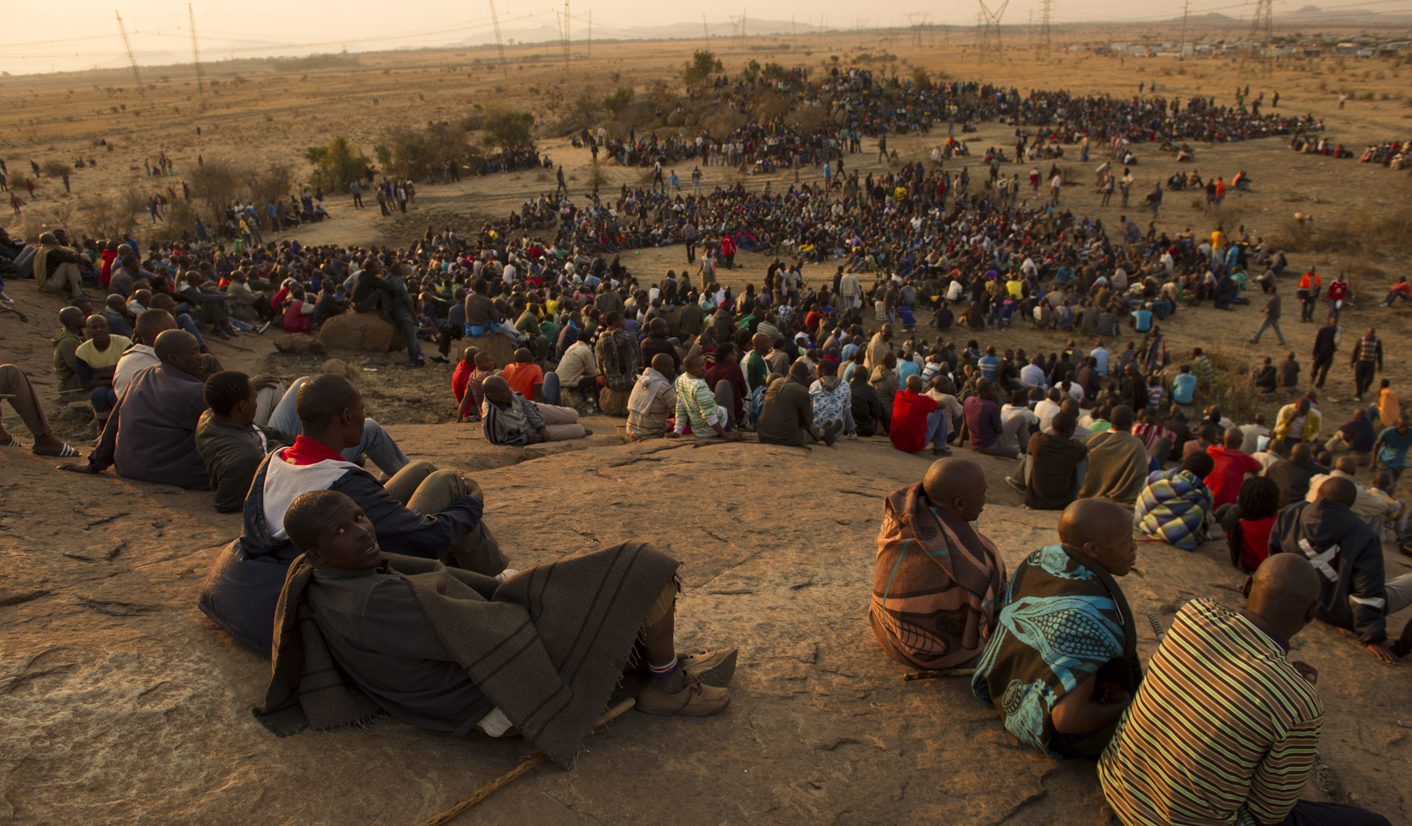 Our nation is standing on the brink. The events at Marikana and its immediate aftermath are no longer in doubt, nor are Rustenburg’s massive mining issues. We face a national emergency – the greatest one facing President Zuma, Mangaung included. By GREG MARINOVICH.

As survivors of the violence at Small Koppie and the veld around it give their eyewitness accounts, there is no longer doubt: Among the policemen deployed at Marikana on 16 August, some intended murder.

We are willing to believe that the televised police shooting at the crowd which reacted to being penned in and tear-gassed, was the result of fear, bad organisation and poor intelligence. Once those policemen are on the stand, we will have some idea as to what their orders were and what they intended to do.

Yet the miners who were there do not see it that way at all. They believe they – and especially their leadership – were being targeted.

Analysis of the footage certainly lends credence to both points of view.

But what happened afterwards is where the forces of law and order degenerate into another force altogether. One that breaks down the very fabric of trust between a citizenry and the instruments of state that are meant to ensure those citizens’ rights and freedoms.

In Marikana, the state has pitted itself against the very citizens it is created by and is intended to serve. Our elected politicians seem to have taken on the role of defenders of a police action. We are, without exaggeration, seeing the emergence of a police state.

As one of the survivors of the massacre, Zeakes*, recalled, “I was so afraid. It was the first time I am hearing the sound of a lot of bullets like that. Other splinters were coming on my head. As the cops approached through the bush I said to myself, I am going to die now.”

Zeakes was afraid because he had just seen two fellow miners stand up with their arms in the air, trying to surrender. They were both shot down.

Zeakes recalled another policeman saying, “You are useless people … if it was in Zimbabwe, we could just set … petrol on top of you; and set fire on top of you while you are still lying down there. Because you are cop killers. You are killing government people. Innocent cops are killed by you.”

Jackson*, another miner, said, “I saw that the hippo that running over a man, until his head was… fucked up. He was one of those dying down here. “

While he was hiding in bushes, Jackson said he heard police yelling, “’You are in the shit, we are going to kill you here.’ Those guys were Xhosa, I hear from the language, pure Xhosa from the Eastern Cape.”

While on the ground in the aftermath, Zeakes said he heard two policemen bragging in SeSotho about shooting the miners, like it was a competition. “I wanted to take him from my angle with my 9mm, but you already took him down with your R4 (sic).”

We know that at least 34 people died that day. We known that most were not killed in the initial incident. They were killed subsequently, over time. Hunted across the veld and in the boulders like animals.

Other journalists have unearthed more survivors, witnesses to cold-blooded murder. Their accounts match the accounts of the Daily Maverick witnesses.

That this occurred is no longer debatable. It happened.

As did the torture of the survivors in prison. There are at least 94 cases opened against the police.

What we do know:

There were indeed 14 murdered at Small Koppie. Let us take the upper estimate for how many died at Wonderkop – 12. That means a further 10, at least, were killed in the veld, some chased by police on horseback, others fired on by policemen in helicopters.

Whatever threat the policemen on the ground believed the crowd posed when they surged forward off the mountain, after the initial fusillade the miners trying to run away posed no threat.

This begs the big question:

Why were deadly Tactical Response Teams deployed in such numbers?

Why were so few crowd control weapons on display?

Who issued the deployment instructions?

Who gave the police commanders approval to go “to tactical phase”? (According to still-circumstantial evidence, the authorisation to use full force, including live ammunition, was issued a day before.)

The workers gathered at Marikana live in shacks they have built for themselves, or rent from shacklords. Their tin rooms lack insulation, water, toilets or electricity. Others live in the hostel compounds the mine provides. Callers to a radio show told a Lonmin spokesperson that the hostels are squalid and not even waterproof. Indeed, from the outside one can see the roofs are rusted through.

The miners in the shacks choose not to invest in their Marikana dwellings. They want to use the majority of their earnings to support their families back home, whether in the Eastern Cape, Lesotho or Mozambique. They know their time at the mines will not be long – they age quickly, mostly from silicosis and other dust-related disease that enfeeble these once strong men.

They live and work under conditions of grave institutional violence. And when they protested that they were not being paid enough for this, the state unleashed paramilitary units against them.

We have yet to hear from our politicians that the police are wrong. We have not heard anything, except that Marikana was a tragedy.

Let us be clear: It was no tragedy; it was murder, murder of the underclass at the behest of those in power, be that power economic or political, or both.

And we believe there is a cover-up of the events underway. The Inter Ministerial work is a sop. Something to soak up time before Mangaung, to allow the current ruling elite to get through this little difficulty.

There is an entire chain of policemen who will have to be fired or resign.

There are ministers who have to resign or be fired.

There are people in the NPA who have to resign or be fired.

And there are those who have to be brought before a court of law for what they did, and what they ordered others to do.

And no, this country cannot wait any longer. No matter how fair and thorough, the Farlam commission will take well into 2013.

This nation needs the individuals who authorised the violence and who executed the miners on Small Koppie known. Now. They need to be ring-fenced from positions of power with greatest urgency.

Miners and their families need to be protected from the police and others in power who stand to lose massively should the full truth become known.

President Zuma needs to personally be involved in settling the dispute between miners and Lonmin. The future of SA’s mining, its revenues, hundreds of thousand of jobs and the wellbeing of the country can spiral down to an abyss in a matter of weeks. This is not the local Rustenburg mining issue anymore; this is a national emergency. President Zuma has no greater task than that, Mangaung included.

In the wake of Marikana, we need ask our selves what kind of society we want to be: a police state, a populist haven or a country that became much better after the horrors of killing its own people made us all wake up.

The choice is ours alone. DM

Photo: Lonmin employees gather on a hill called Wonderkop at Marikana, outside Rustenburg in the North West Province of South Africa August 15. The miners are calling for the minimum wage to be lifted from its current R4,000 a month to R12,500. The men are mostly Xhosa and Pondo speaking, and the strike was initiated by the drillers. Photograph by Greg Marinovich.