Marikana eyewitness: ‘He raised his hands, they shoot him in the head’ 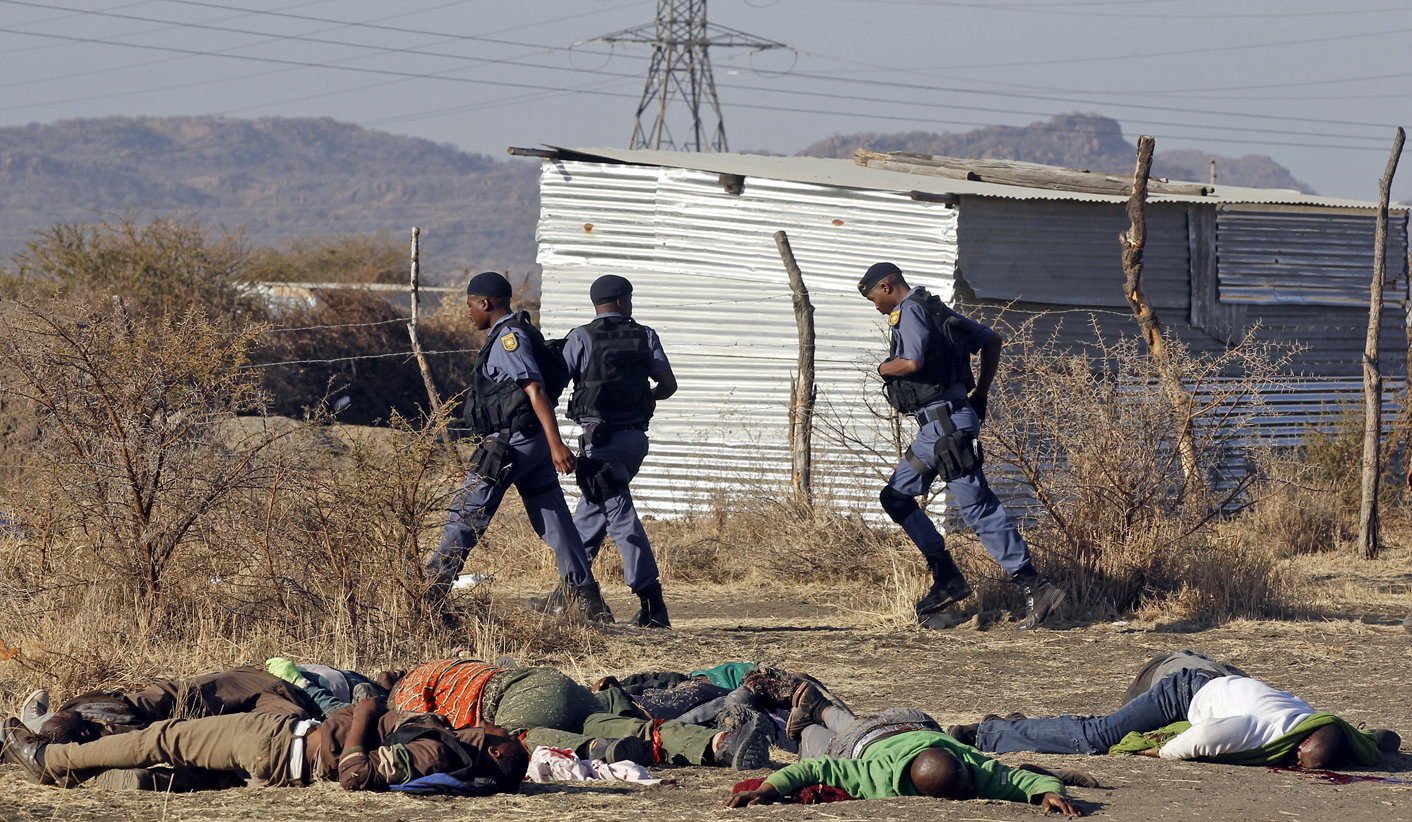 Simphiwe is one of the more fortunate miners: he both survived and escaped the police on Thursday 16 August 2012, the day of Marikana’s bloody massacre. But what he didn’t escape was the absolute horror of seeing his comrades mown down. He tells MANDY DE WAAL his story.

“I was there on that day, that day the 16th of August. Ja, I was there. I was one of the mineworkers that were striking that day,” Simphiwe says, talking to Daily Maverick on the phone from Marikana.

It has been three weeks since police shot 112 miners at Lonmin’s Marikana platinum mine in the North West, killing 34.

“On the day of the massacre we sat there, and we were waiting for the management to come to us and listen to our appeal,” says Simphiwe, who has asked Daily Maverick not to use his name because he is afraid that police might seek him out. Simphiwe says on the day of the shootings, Association of Mineworkers and Construction Union (AMCU) president Joseph Mathunjwa came to the striking miners gathered at their usual meeting place, a space which has become known as ‘the mountain’.

“He (Mathunjwa) did get (meet with) the management, but he didn’t come with anything to us. He said the police said we must go. He asked us we must come out of the mountain (leave the gathering place). He did ask us to come out. And then we refuse,” the striking miner says.

But management never came. Instead, a heavily armed battalion of police apparently rode in. “They (the police) come with wires. And then they are starting putting it… they put it around us.  There was an open place where we can go out, and when we approach that they start shooting… they start shooting at us,” Simphiwe recalls.

The miner says he is not sure how many police surrounded the striking workers. “There were many. Maybe a hundred. Maybe there can be more than a hundred. Even the soldiers, even the soldiers were there… but there were few soldiers.” A number of miners have talked to various media about soldiers being present on the day, but at this stage it is uncertain whether these were indeed soldiers or police in camouflage gear.

“Since we were gathering on the mountain they were putting around (circling) us so that we must come out. When we start to come out that started to surround us with the hippo (a police Nyala or riot control armoured personnel carrier). And it was too fast. And when we get to the entrance of the fence where we can get out they started to shoot at us. That is where the massacre started.”

The big question that has lingered these past weeks is why the miners surged forward toward the opening in the razor wire where police stood armed and ready. The media filmed what looked like an onward rush, or even an attack, but what precipitated this movement?

Initial televised coverage of the massacre posited the theory that the miners themselves had initially fired on police, who retaliated. Later, academic researcher Peter Alexander suggested a new theory based on evidence and interviews he and other researchers had gathered from the scene, shortly after the shootings.

Alexander’s assertion was that police had fired into the crowd, causing it to surge towards the armed battalion outside of the razor wire. Simphiwe’s testimony certainly corroborates this account of events – that police fired, and that is what caused the crowd to panic and attempt to flee.

Simphiwe continues: “I run toward the shacks. The other people they run to that other side (towards an outcrop of large boulders that has macabrely been renamed ‘killing koppie’) and the police they chase them. And then the other police come from that side of Marikana,” he says.

Simphiwe tells Daily Maverick he witnessed these killings first-hand. “I see. I was there. I was so scared because it was the first time to see someone kill another person. It was the first time. Even now I have the nightmares. When I sleep I just see that again, and again, and again. But I have been to church and I have been praying. Also at church they pray for me.”

The miner evaded police capture on the day of the massacre. “I was not in prison. I run toward the shacks and then the police they did not catch me.” The shacks that the miners and their families live in are adjacent to the meeting place, and are a stone’s throw away from the cluster of boulders called ‘killing koppie’. “I am not sure how many people died (at the boulders) but many of the people died there. Many of the people died there because many of them ran towards that side,” Simphiwe says.

People also ran towards the boulders because they were being chased by law enforcement officers on horseback. “And when the other police come with horses, when people saw those police coming to them they started to run to that place (the boulders or koppie). There were many people who ran there, but most of them died.”

Nothing will bring back the dead. Perhaps South Africans can do something for the living. Perhaps the truth of what happened on that horrible day would be a good step forward. For the souls of the dead, and certainly for the soul of South Africa. DM

Photo: Policemen run in front of some of the dead miners after they were shot outside a South African mine in Rustenburg, 100 km (62 miles) northwest of Johannesburg, August 16, 2012.