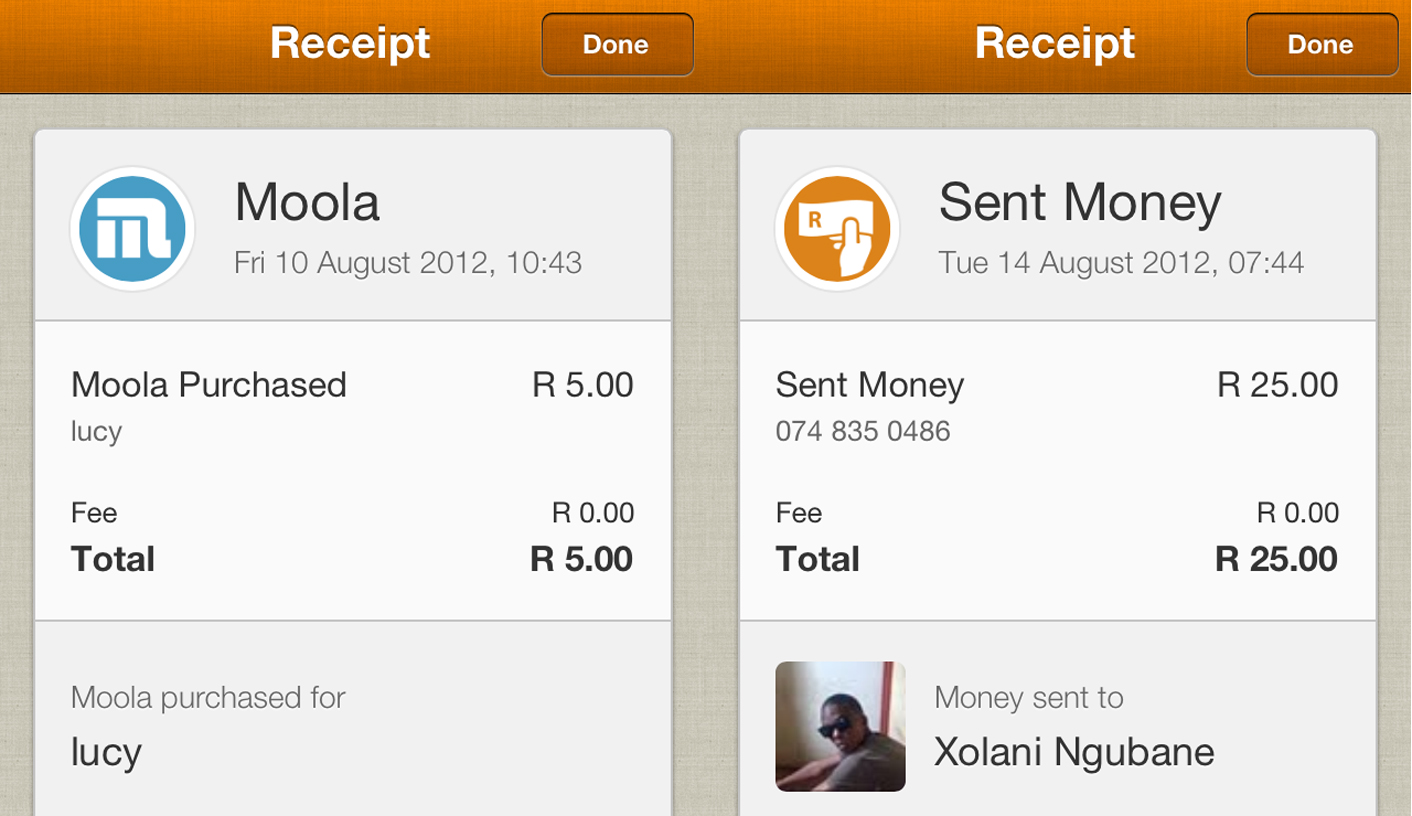 It’s been just over two weeks since social network Mxit announced its new Mxit Money service, an initiative allowing users to send money via cell phone. Mxit Money will only be launched to the entire Mxit network on 15 September, but REBECCA DAVIS checked out how it’s going so far.

The idea of a mobile-based financial service is not new to Africa. Money transfers via cell phones have been happening for some time in Uganda and Kenya, with the latter’s M-Pesa a particularly successful example of how well the service can work. According to website Kiwanja.net, around 50% of Kenya’s entire GDP is expected to pass through the M-Pesa platform over the next 12 months.

There are logical reasons why the technology would take off so well in Africa. For one thing, the practice of remittance (sending money to a distant recipient) is well established. A 2011 World Bank publication, Remittance Markets in Africa, noted that “African countries are estimated to have received $40-billion in officially recorded flows in 2010, but the true size is believed to be far larger”. Secondly, the vast majority of African families do not have formal bank accounts: the World Bank puts the figure as low as 20%. Mobile phones, on the other hand, are everywhere – by some estimates mobile penetration in South Africa is up to 90%.

When Mxit’s CEO, Alan Knott-Craig, released the book Mobinomics (with Gus Silber) earlier this year, he seemed to be hinting that the financial services direction Mxit would be moving in was that of the mobile wallet, “a digital trade and payment system powered by your cell phone”, which the book revealed was being tested by Mxit employees given a daily lunch allowance. What the company announced a fortnight, however, was not quite that. “We’re not a bank, or a wallet, we’re a platform,” Mxit Money CEO Kevan Christmas confirmed to the Daily Maverick. “You solve the wallet problem by not being a wallet.” (Disclosure: Knott-Craig was an early stage investor in Daily Maverick.)

What, then, is Mxit Money? Well, it’s a platform which uses Standard Bank’s Instant Money services to allow Mxit users to move money around. There are a number of different functions: you can deposit money; transfer money to another cell phone user, who can then withdraw it (from 1 September, at Standard Bank ATMs); and use funds to buy both real-world basic goods like cell phone airtime and electricity, and the internal Mxit currency, Moola.

Some people have pointed out that most of these functions are already available via Standard Bank’s existing Instant Money service, which allows South Africans without a bank account to transfer money to others. The recipient receives a “release code” via SMS and can pick up funds at a participating outlet. Christmas was at pains to stress key differences: with Mxit Money you don’t have to take the full amount out at once and, he said, there is the utility of the real-world purchase function.

“During testing, now, we’re seeing a lot of ‘distress purchases’,” he said. “So we find people running out of electricity at midnight, and messaging a friend to ask them to send them R10 which they can then use to buy electricity via cell phone rather than leaving home.”

At the moment, Mxit Money is in an invite-only testing phase comprising a few thousand users, some of whom have been given money to use. The company is busily studying how they use the platform. “We’re interested in seeing how people actually use the ability to push money to each other,” Christmas said. “For instance, are people getting together to send money, like an agency? The fees for depositing and withdrawing money (R9.95 and R7 respectively) are standardised, like any remittance product in the world. But if you do it once for a lot of people, it’s more financially efficient – if I do it for three of us, I only pay once. So we’re seeing a bit of that already.”

Christmas said the ability to purchase airtime and electricity has already proved unsurprisingly popular. Then there’s the usual remittance activity happening, with people sending money to relatives in other places. “We’re also seeing a bit more social stuff, like people approaching each other for R50 loans,” he said.

It seems likely that parents will be using it to give their children airtime and allowances, which raised the question of control. Will parents who don’t want their children to have bank accounts be happy about their ability to receive money? “Well, to put money in, you need an ID, so you have to be FICAd at that point,” Christmas said. “But it is definitely something we’ll be monitoring. We’ve already had people coming to ask us if it’s possible in the future to restrict the number of places you can use it, and so on.”

But ultimately, Christmas said, they can’t be sure exactly what people are going to use it for. “I mean, look at the history of Mxit,” he laughed. “You start with something to do with instant messaging, and now you have a whole community built around it.”

This perspective was echoed by financial journalist Hilton Tarrant. “It was critically important for Mxit to take this step, because it allows money to leave the Mxit economy for the first time,” he told the Daily Maverick. “But it’s going to be interesting to see what Mxit users do with the platform – and whether they do anything at all.”

Tarrant said the freedom offered by the mobile platform may be constrained by its collaboration with the formal banking system. “The problem in South Africa is that with any payment platform or currency, you need to link up with a bank, which has a banking licence, to enable a link to real-world currency,” he said. “This means you’re forced into a proprietary product – in this case, Standard Bank’s Instant Money – which will necessarily hamper uptake because you still need to use the bank’s existing channels to withdraw and deposit.”

Part of the success of M-Pesa in Kenya has been attributed to the very limited bank involvement. But Christmas does not see the partnership with banks as a problem. “Banks are not the enemy,” he said. “Forward-looking banks will certainly be attracted to what we’re trying to do.” He said Mxit Money has collaborations with two further banks beyond Standard Bank in the pipeline, which may be finalised within the next few weeks.

In terms of the long-term strategy, Christmas said it’s all about “solving the m-commerce problem”, but with a focus on South Africa initially. “We’re not going to play with Africa just yet, because there are some complex cross-border issues to consider. We need to get Mxit Money right here first.”  He said the company has a “whole raft of stuff” planned, including expanding the list of real-life goods purchasable from the platform; investigating the possibility of using Mxit Money to make purchases online; and exploring what Christmas said has been a frequently-asked question: will there be any way to allow someone else to pay for goods at the point of delivery?

“It’s interesting stuff, and we’re trying not to be too prescriptive,” Christmas said. “At the moment we’re all about identifying innovative users, trying to incrementally give them tools, learn what they do and then give them more.”

Mxit estimated that by the end of 2012, South Africa will have 14-million of its mobile users making mobile payments to the total value of R7-billion, so there’s a lot of incentive to get the system working well as soon as possible. Christmas said “hundreds of thousands of people” have already added Mxit Money as a contact on Mxit, despite the fact that most of them will only be able to use the service from 15 September.

There will be a lot of interest in how well the platform takes off. Vodacom’s attempt to launch M-Pesa in South Africa in August 2010, in collaboration with Nedbank, has been a disappointment to the company. In May this year, Vodacom CEO Pieter Uys admitted that M-Pesa had thus far failed to live up to expectations. Vodacom initially hoped to capture 10-million of South Africa’s total unbanked population of 13-million over the next three years, but by May 2012 had succeeded in signing up less than 1-million.

“M-Pesa works in Kenya because of a number of factors unique to that country – chiefly a large migrant workforce and a very immature banking system,” Tarrant said. “Most importantly it got distribution right. You need to be able to get money into and out of the system easily.”

Christmas isn’t fazed by this. “We’re not M-Pesa,” he said. “M-Pesa is more about a full range of banking services. We’re just tapping into some of those.” DM