Gold Fields strike: With or without Malema, NUM’s credibility is at stake 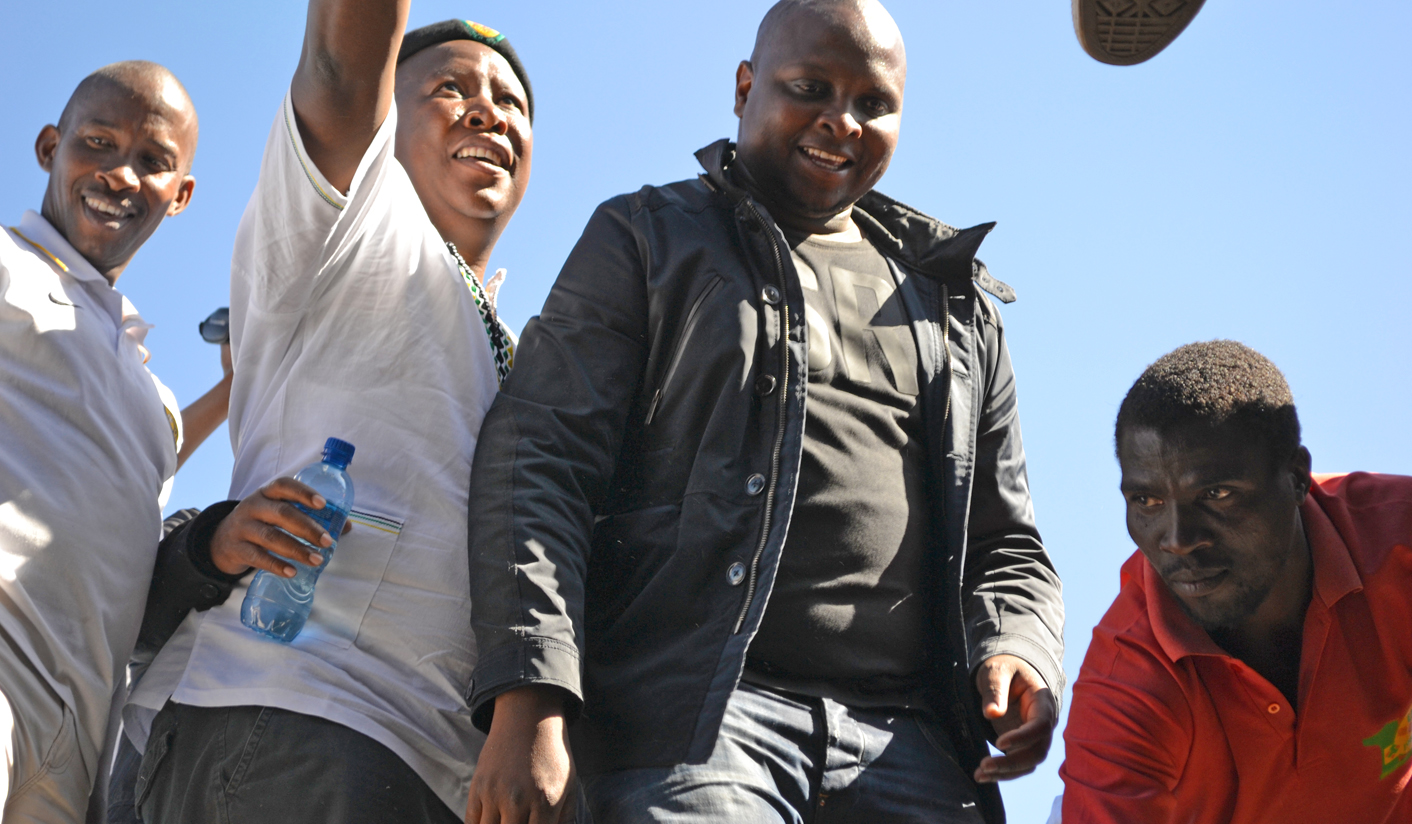 Julius Malema, as self-appointed leader of the mining revolution, addressed striking workers at Gold Fields’ KDC East gold mine in Westonaria on Monday. He listened to grievances, made the right noises, and got a rousing welcome from an audience of thousands. By KHADIJA PATEL.

Julius Malema was given a rousing welcome by striking workers at the KDC East mine on Monday. His anger, though, was significantly toned down and his message more conciliatory than it was in the Aurora last week. He did not invite workers over to the dark side of an ungovernable mining industry, but he did listen to the grievances of those who felt repressed by their employers and ignored by the branch leadership of the National Union of Mineworkers (NUM).

“Leaders of the National Union of Mineworkers should know that you can’t act for workers without consulting them, and don’t take workers for granted,” Malema said. And workers applauded him, passionately nodding in agreement.

The urban legend of Malema’s great power may well have received more support, but crucially, he was addressing a large group of workers who had grown dispirited with the opportunities available to them – opportunities to air complaints about any number of grievances, from the quality of food served to them, to suspicion that their union leaders are earning multiple salaries while the workers themselves feel their remuneration is inadequate.

“The leaders don’t respect us,” said one mineworker, who identified herself as “Zee”.

“They show us they don’t care about us,” said another worker, who identified himself as “Mac-Donald”.

As Malema spoke to to the miners, the news arrived that the Hawks’ investigation into his affair was being wrapped up and that he would soon face the justice system of South Africa. That must have distracted him somewhat.

Gold Fields, the world’s fourth largest gold producer, announced last week that miners at the KDC mine had been on strike since the start of a night shift on Wednesday, over a dispute related to an internal wrangle within a NUM branch. And on Monday morning, five days after the strike began – following assurances from NUM that everything had been resolved and that there was never an internal union dispute – NUM spokesperson Lesiba Seshoka admitted to Daily Maverick that the strike had remained unresolved because of differences between the branch leadership and workers.

It was an about-turn from Seshoka, who last week insisted that it was a disagreement about a funeral policy benefit only.

“Members did not want the mine to implement a compulsory funeral scheme; they want options,” Seshoka had explained.

The funeral policy had originally been negotiated between NUM and the mine, and all category three to eight workers would have had R69 deducted from their salaries for the policy, regardless of whether they wanted it or not. It was also applicable to workers who belonged to other unions as well those who were unaffiliated. Workers first learned of this when they received their payslips last week, and according to Malema, workers had originally been told that only R39 would be deducted from their salaries for the benefit.

A number of striking workers told Daily Maverick that NUM had acted unilaterally – without consulting workers, or informing them about the benefit.

“They didn’t inform the people about the decision about the funeral policy,” one worker said.

“(NUM) leadership did not come when workers called, so people now want to choose their own leadership.”

According to Seshoka, mine management agreed to make the policy voluntary on Friday.

Gold Fields, however, has begged to differ. Photo: Although a core group of striking workers carried knobkerries, or tree branches the atmosphere at the strike, although angry was not threatening. (Khadija Patel/Daily Maverick)

The differing accounts of the timeline for the resolution of the funeral policy complaint is significant because it raises questions of the communication channels between the branch leadership and the NUM bigwigs in Johannesburg.

“They are giving us rotten food,” one worker complained passionately.

Another worker interrupted, saying a member of the NUM leadership at KDC East actually owned the catering company that supplied the food to workers.

“When we go to them to tell them about the food they tell us ‘Go away, go to your compounds,’” he said.

More than one worker also alleged that workers had been receiving what they termed “photocopied” payslips, claiming that the branch leadership was responsible for handing out counterfeit payslips to workers. Other workers alleged that their payslips arrived in unsealed envelopes, saying again that NUM officials were somehow responsible.

And then, to top it all, workers feel they are being cheated of better salaries by union officials who have put their own interests ahead of employees.

“The money workers are getting is too little,” Zee said.

Seshoka indicated that senior NUM officials were holding out for due process at the KDC mine. “What should happen is the (branch) leaders should be suspended and then the allegations should be investigated,” he said.

It is, however, a process that workers have little patience for. “The process is going to take too long,” Zee argued. “We want these people removed, effective immediately.”

Workers are hellbent on going forth with a vote of no confidence in their branch leadership and then proceeding with the election, but NUM does not appear to be inclined towards a compromise.

“We are hoping that the issue can be resolved between the branch leadership and the miners,” Seshoka said.

According to Gold Fields, some 12,000 employees are participating in the strike, scuppering the KDC East operation production of 1,660 oz a day. Already Gold Fields management has been granted an urgent interdict to bring what they describe as  “the unlawful and unprotected strike” to an end, but so far the interdict has been ineffective.

Lunsche has blamed the strike on a core group of between 1,000 and 2,000 workers, who he claims have been preventing their colleagues from going to work. In recent days, Gold Fields has repeatedly announced in statements that the strike is now a dispute among organised labour, and though the company claims to be doing all it can to help resolve the issue, it has placed the responsibility for the resolution of the strike firmly at NUM’s door.

Many workers, however, still feel that Gold Fields has a role to play in steering the strike towards a resolution.

Emmanyel Seeiso, a pump supervisor, who works eight-hour shifts, six days a week, has a plan of action ready for mine management.

“Management must expel the (NUM branch) leadership,” he said. “And we can elect a temporary committee.”

In the meantime, Malema made his way to Westonaria on Monday, the latest pit stop in his mining revolution. Thus he continues to earn the wrath of senior NUM officials, who believe he is using the current tensions in the mining industry for his own benefit.

“We are very disappointed that people want to use a situation where deaths have taken place in the industry to revive their political careers,” he said. “What is happening in the mining industry is not only dangerous for the industry.”

Malema, however, countered the allegations of opportunism levelled against him by NUM, claiming that his attention to the mining industry was alive long before the massacre in Marikana.

And though Malema heard the grievances of the workers and told them more or less what they wanted to hear, when he left, workers milled around; many of them returned to their compounds while others stood, waiting expectantly. Malema has heard them; what now?

It is here, at the level of industrial unions stripped down to their branches, that ordinary workers experience their work, commitment and care. Or lack of it. And it is here that we may sense what lies in store for the business of trade unions in the rest of the country. And from the look and sound of what is happening at KDC East, there could be great tumult ahead. DM