From The Spear to Umshini Wam, a trip less expected 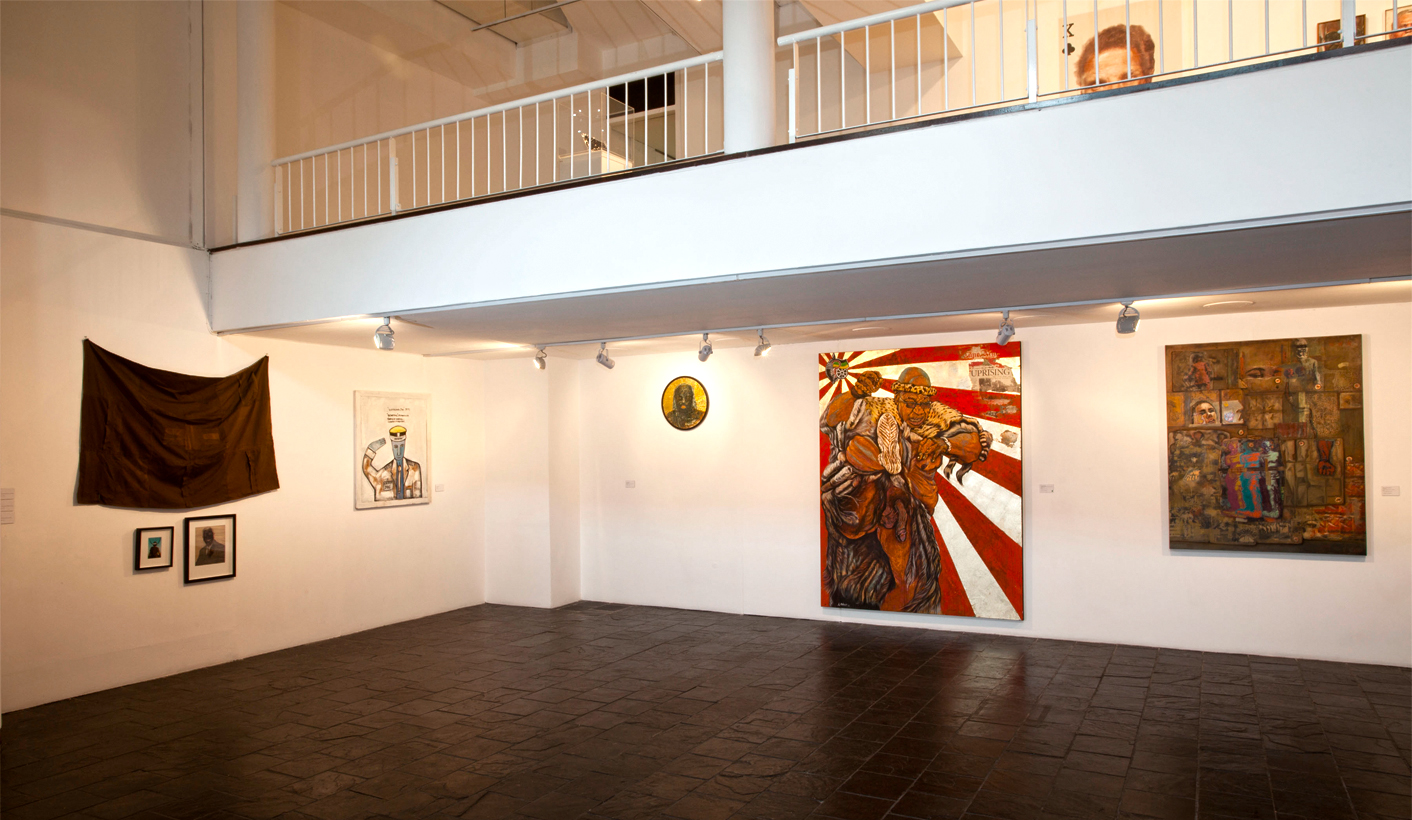 Ayanda Mabulu’s painting Umshini Wam (Weapon of Mass Destruction) recently went on display at Cape Town’s AVA gallery. Comparisons with Brett Murray’s The Spear are inevitable, since both display President Jacob Zuma’s genitals. But Mabulu’s work does not seem to be raising the same level of ire as its infamous predecessor. REBECCA DAVIS investigated.

There is no mistaking which artwork is the star of the show at the AVA Gallery’s Our Fathers exhibition. Ayanda Mabulu’s Umshini Wam hangs centre-stage in the main exhibition area, dominating the space by virtue of both its size and its content. In the painting, a grimacing Jacob Zuma is captured raising his leg in a dance, while wearing traditional garments. Up goes the leg – and, oh, there they are again. The President’s privates, just when we’d all managed to erase The Spear from our mental databases.

In the top left corner of the painting, the ANC’s logo is covered by a question mark. In the top right, a newspaper clipping on the topic of the 1976 Soweto Uprising has been pasted on to the canvas with the words “How can you dance where people are dying of starvation?” scrawled upon it. When it comes to the genitals themselves, they are, if anything, more explicitly rendered than in Murray’s The Spear. The painting can be bought for R70,000, though you may have to hurry – no sale is yet concluded, but it already bears a “reserved” sticker.

What gives? In a post-Spear era, a gallery’s choice to display a work of this kind can either be read as a brave stroke for freedom of expression or an attempt to cash in on some of the hype that The Spear attracted. Exhibition co-curator Kirsty Cockerill assured the Daily Maverick that neither of these motivations apply. “Ayanda is an artist (the AVA) has engaged with for a long time,” she said.

“When he first showed us this work, which fits in such a considered way with the exhibition’s theme, we gulped. We realised it would very likely be read in relation to the previous controversy and not in the context of the Our Fathers exhibition. We gulped because we realised there would be responsibilities associated with putting it up, but we felt that it would be better to carry the burden of those responsibilities than not to include a work that was such an important chapter to the exhibition.”

Cockerill said anyone who suspects there is some financial motive behind the painting’s exhibition is way off base. “We are a non-profit community gallery, and we are very supportive of young curators and artists.” It was her co-curator, Chantal Louw, who initially conceived the idea for the exhibition, which has been in the offing for the past seven years.

The blurb of the Our Fathers exhibition explains that it “engages the notion of patriarchy… a system in which the father is the supreme authority in the place of worship, family, community, country and work environment.” The curators collected works from artists who explore “The failure of the father and the greatness of the father. The loss of a father, or abandonment by the/a father. The imagined idea of what a father is, was or should be.” There are works from 24 artists on display, including two 2006 pieces by Brett Murray which explore the disconnect between religious piety and war-mongering.

Those other artists are unlikely to get much of a look-in, however, when Mabulu’s piece is there to gawk at. Judging by the time I spent in the gallery, the majority of visitors were clearly there for one thing only: to examine Umshini Wam with curiosity, perhaps take a snap of it with their cell phone, and exit.

“A lot of people have come through, and some have liked the piece, and some have not,” Cockerill confirmed. “But the maturity of the dialogue has been amazing. We have been very available for discussion with everyone. People can deal with it, and they will.” She said the AVA discussed with Mabulu the possibility that, as with The Spear, the painting might end up getting defaced. “He said, ‘If someone comes in to deface it, let them do it. It’s not about the object, it’s about the dialogue.’ As long as none of our staff members were being intimidated, which they haven’t been.”

Cockerill said she appraises the painting purely as an artwork. “Chantal and myself have stayed away from heaving rhetoric. Every time we are asked about freedom of expression…” she sighed. “It’s not something we consider in this case. We have Ayanda, as a son, asking his father some difficult questions. This is not about Zuma’s sex life, not about polygamy, not about those aspects at all.”

This isn’t the first time Mabulu has painted Zuma disrobed. In 2010 he produced a piece called Ngcono ihlwempu kunesibhanxo sesityebi (Better a fool than a rich man’s nonsense), which was referenced many times during the peak of The Spear uproar because it depicted Zuma’s penis on crutches, yet attracted no outcry at all. Journalist Unathi Kondile suggested at the time that “the reason Ayanda Mabulu’s artwork didn’t cause ripples is because as far as art is concerned a black artist is intellectually incapable of producing a complex work – blacks are incapable of satire – until they are verified by their white counterparts.… It is only when the African story is told through the white lens that newspapers and the general public will pay attention.”

Art critic Matthew Blackman told the Daily Maverick he thought there was “a certain amount of truth” to Kondile’s first observation, about gate-keeping within the South African art community. “It’s true to say that a lot of young, self-taught black artists, like Ayanda, find it hard to enter the highest echelons of the art world, and get into the top galleries. Artists who don’t go through tertiary art schools often struggle to make it. Not a lot of funding is coming through to galleries like the AVA, and maybe people like Ayanda aren’t allowed the kind of breathing space they want and deserve.”

Others will say that the reason Mabulu is allowed to produce these works without fear of censorship, unlike Murray, is because he is black. Nonetheless, this latest work has already caused a bit of a stir. The SACP and Cosatu in KwaZulu-Natal Monday responded to the painting Monday by releasing a statement calling for legislation to protect the dignity of the office of the president: “We are saying that there could be a bill that would prevent the president being painted naked,” said Themba Mthembu, provincial secretary of the SACP.

Last week, as the exhibition opened, United Democratic Movement President Bantu Holomisa came out to bat for the president on the matter, saying, “Why repeat the same thing? There were marches and a lot of inconvenience…I sympathise with the president. This is too much”. ANC Secretary General Gwede Mantashe meanwhile responded with contempt. The Cape Times quoted him saying, “Sometimes people think derogatory gestures are a beauty contest. If that artist wants to be in that contest, allow him.”

Mabulu himself, however, said the ANC won’t touch his painting because they know the point he is making – a critique of Zuma’s leadership – is valid. “If we were to go to court they would lose, because these are relevant issues,” he told the Daily Maverick. “They don’t want to open a can of worms. This art is a protest, not to attract media attention. There is no way they could boycott it because they would be killing our voice.”

Mabulu said he painted Zuma’s penis for one reason only: “As a symbol that I am talking to a circumcised man, not a boy. If he was a boy, he would still need to grow and understand leadership, but he is a man, not a boy.” He said he is not particularly interested in Zuma’s sex life. “I am trying to address the current situation in South Africa, including what happened recently at Lonmin, and question our leader: how can he allow such things to happen in a democracy? The President is a father figure – how can you starve the nation if you are really a father? If the authority is centralised around you, how can you allow guns to kill your own children?”

The artist rejects the idea that his work is an attempt to hijack some of Murray’s notoriety. “Brett Murray’s painting is powerful. I respect him, I support it, but I’m not inspired by him,” Mabulu said. “I have my own dialogue, and I am talking about things that I know: poverty, education, unfavourable conditions.”

Outside of its status as a political talking-point, what makes Umshini Wam a good piece of art?

“There’s a lot of beauty to it,” responded Cockerill. “There are aspects which are undeniably real in their articulation, and it’s not about needing to have a degree, or high visual literacy, to appreciate that.” Blackman’s view is that Umshini Wam may not be Mabulu’s best work, but he describes the artist’s output as “strange, interesting, often on some level humorous”.

Most people would agree that in the wake of the Marikana massacre, the ANC should have bigger things to worry about than another painting. That aside, though, the muted response to Umshini Wam thus far should surely come as a relief. Political analyst Eusebius McKaiser suggested last week that this was as a result of the fact that “nudity has lost its political potency”. That may be, but a simpler explanation is just that we’re all still recovering from a severe bout of Spear fatigue. DM