Far away from murder fields of Marikana, a funeral 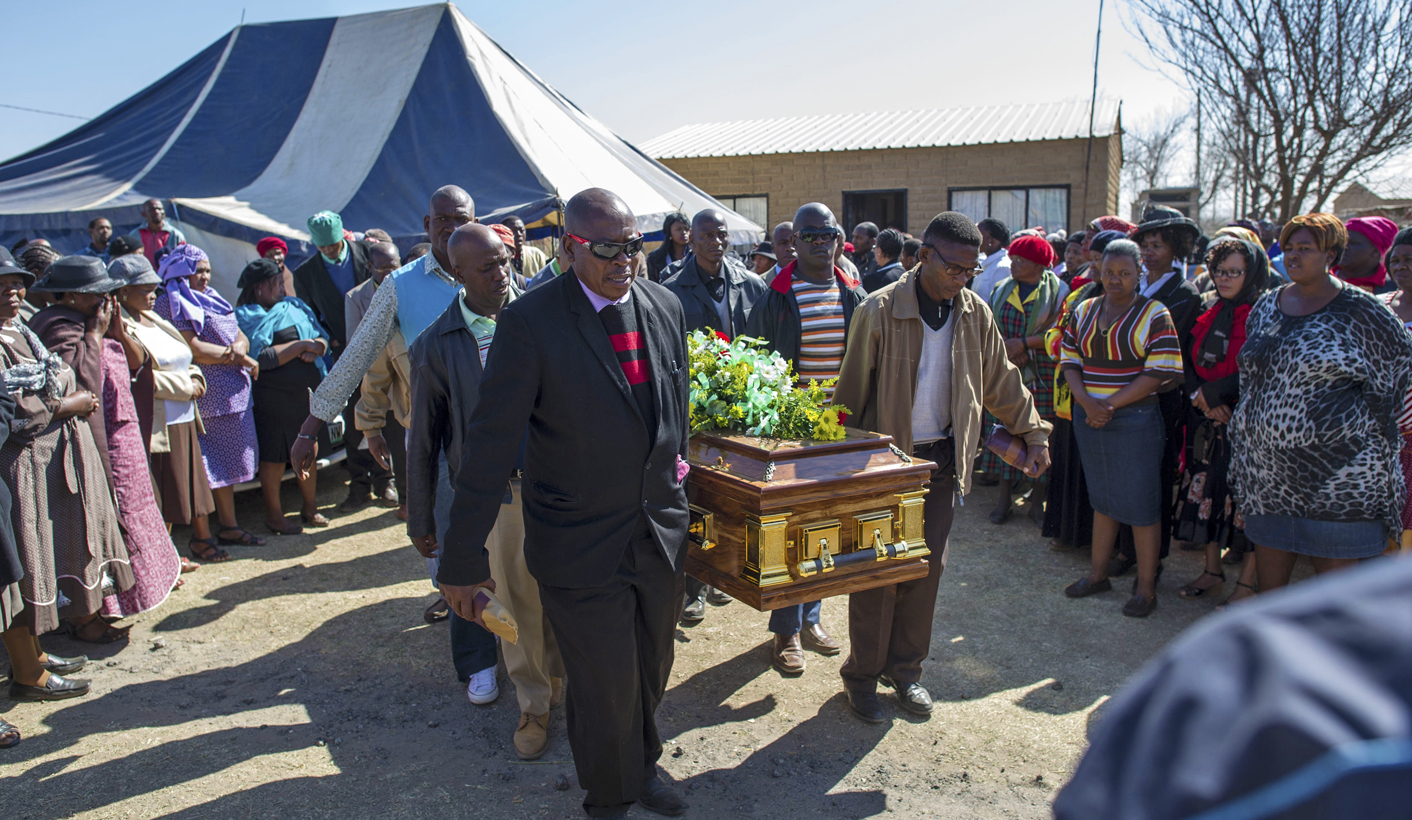 His name was Andries Motlapula Ntsenyeho. A father of five, husband, miner. A human being. On Saturday, after his life was violently cut at the age of 42, he was returned to earth. By GREG MARINOVICH.

After the ritual at the site of his death, the white hearse took Andries Motlapula Ntsenyeho’s corpse away from Marikana and headed east and then south. Hours later, it was again slowly negotiating dirt roads, but this time in Sasolburg, a chemical-industrial town built to host a plant for refining oil from coal. The township of France is an expanse of depressingly similar cheap RDP houses.

The settlement had its origins in 1998 as shacks built on as land occupied by people from Zamdela township, as well as those forced off farms by lack of jobs. The name was chosen in honour of the 1998 football World Cup that was held in France. The RDP houses were built later as the needs of those people for land was accepted.

Ntsenyeho’s body was delivered to his widow and five children at house 11356. It was here that an overnight vigil was held, the coffin behind a screen and women wrapped in blankets sitting on the floor with their legs to one side, squashed together in the tiny room.

It was the deceased’s brother, Tebogo, who washed the body. He saw three wounds, one at the juncture of the neck and collarbone, and two in the upper thigh/groin area on the left leg.

Early the next morning, a bitter wind whipped the sand and ash into the eyes of women preparing large three-legged pots of food. Men gathered under the stark branches of a peach tree that prevaricated on budding. They were Ntsenyeho’s miner comrades. They were angry.

Some spoke isiXhosa, others Sesotho. Sam, a bespectacled man, said the miners would not return to work until their demand for R12,500 net pay was met. “It would be a betrayal of our fallen comrade.” All agreed on this, and Sam further voiced that they would stop the 10% or so who had returned to work. Another chimed in, “We pay Zuma’s salary so that he can have all his wives.”

“I and my friends will never again vote ANC. Never,” Sam said. On being quizzed as to whom they might vote for, he responded “No one.”

Their friend’s body was found at Small Koppie they said, where they had prayed the day before. He was one of the 14 who were killed there. They were convinced police had murdered Andries Ntsenyeho.

Let us see what we can find out about this man, who lived between Marikana and Sasolburg.

He was 42 and hailed from Meqheleng, in the Eastern Free State, aka Ficksburg, before moving to Zamdela township where he hoped to get work. In 1998, he was one of the first to erect a shack at France.

He was married and had five children. He worked for Lonmin, as rock drill operator at the Marikana mine. His Lonmin employee number was 20039750, and he was employed on July 22, 2011. According to his April pay slip, his basic wage was R5,197. After overtime, stope bonuses, housing allowance, etc., and various deductions and tax, his nett pay was R6,742.

As rock drill operator, he had the toughest job on the mine and was a paid up member of NUM, the National Union of Mineworkers. He was also one of the core group of workers who began the strike for better wages, a leading member of the informal inner council of men from underground. One of his fellow miners, let’s call him Mpo (his real name is known to Dinformed Ntsenyeho was in charge of miner discipline. On the 16th he was to ensure no one ran; that they stayed on the mountain. But then all hell broke loose. In the chaos that followed the initial shooting, Mpo said, he saw Ntsenyeho running towards Small Koppie.  He believed Ntsenyeho was identified and targeted by police.

The police certainly knew who the leadership was – they met in tight huddles in front of the mass of the miners on several occasions. They might well have decided to target the leadership.

Other witnesses said Xolano Nzuza, the most prominent of the leadership, was followed by a police helicopter as he fled across the veld. He is said to only have managed to escape when another miner gave him his shirt to throw police off his tracks.

Another prominent leader killed, allegedly by police, was a man called Mambush. Versions of how he died differ; some said he was killed in the first fusillade of gunfire, others that he was wounded and taken to hospital where a lethal injection was administered. I do not give credence to this, but many of the miners believe it to be true. This version is based on the belief that Mambush, Ntsenyeho and three other key leaders were protected by some secret and powerful intelezi, or magic potion, which was supposed to protect them from bullets.

Whatever the truth of what happened to Ntsenyeho and Mambush, the release of the autopsy reports will lay the debate to rest.

Under a blue and white tent that subsumed most of the front yard, the miners stood close around the coffin. Ntsenyeho’s wife sat among the women of the family in the front two row of chairs. One by one, mourners passed by the coffin, peering at his glass-covered face, bidding a last farewell.

Ntsenyeho’s remains were carried to the hearse, which led the funeral procession to the cemetery. Friends stayed behind to spray down the dusty yard and wash off the traditional mourning whitewash from the windows of the house; cleansing the house of death. DM