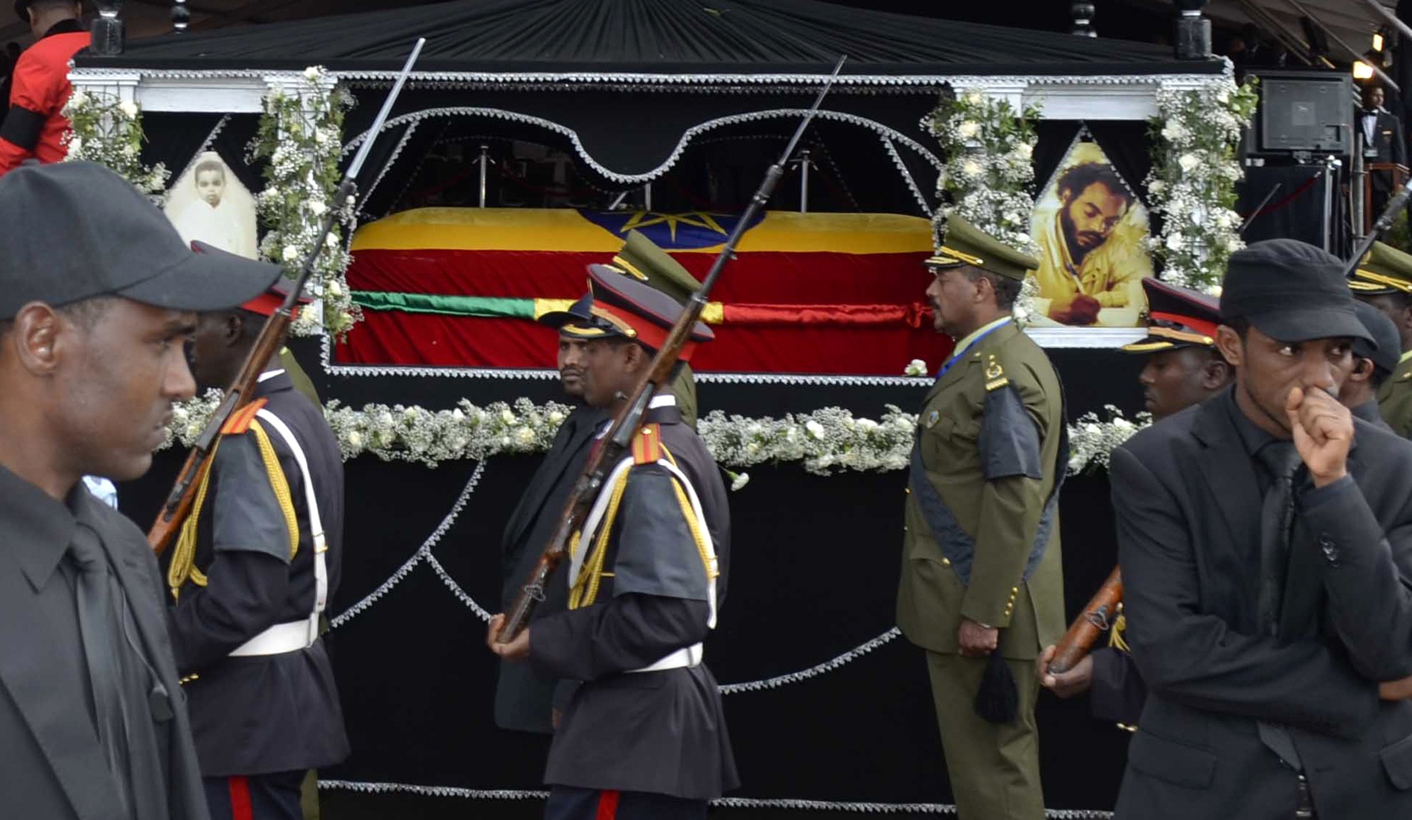 Tens of thousands of Ethiopians and at least 15 heads of state turned out on Sunday to pay their respects at the funeral of Meles Zenawi, the guerrilla leader turned economic reformer who died last month after more than two decades in power. By Aaron Maasho.

The prime minister’s coffin, draped in the national flag and placed on a black carriage, moved slowly from his residence to the vast Meskel Square, in a procession that included a military band and religious dignitaries.

The coffin was set in front of the crowd waiting in the square, and the assembled priests, wearing the colourful robes of the country’s Orthodox Tewahedo Church, intoned solemn prayers.

Mourners waved flags and some wept as they listened to speeches from their prime minister-designate, other African leaders and a senior U.S. official.

Meles, who was due to step down in 2015 at the end of his fourth term as prime minister, died at a hospital in Brussels aged 57. The authorities said he had died of an infection after receiving treatment for an undisclosed ailment.

Heavy rain poured down as the cortege, flanked by top military officers, moved in procession to the Holy Trinity Cathedral for the funeral service and burial ceremony.

“He was a visionary, a great leader,” said Abiy Yohannes, a university student who arrived at the square at dawn. “It is a great loss that we will feel for many years to come.”

Meles seized power from Mengistu Haile Mariam’s military junta in 1991 after a 17-year civil war in the Horn of Africa country, and pushed through reforms that gave Ethiopia one of the strongest growth rates in Africa.

He took a strong stand against Islamist militancy in the region, a position that won praise from Western powers, while suppressing political opponents at home – which did not.

Despite economic growth that barely fell below 8 percent a year between 2004 and 2011, Ethiopia remains one of the poorest countries on earth, and Meles’s opponents say his suppression of dissent held the country back.

Meles’s deputy, Hailemariam Desalegn, was named as his successor, to some extent allaying concern that the diverse nation could fall apart and become unstable, and is due to be sworn in in the next few days.

“He has passed away, but … we will strive to carry on his vision to transform the country,” Hailemariam said in a speech in Meskel Square. He said Meles would eventually be interred in a mausoleum at a research centre and museum to be set up in his honour.

Meles was born Legesse Zenawi in 1955 in Adwa, the site of Ethiopia’s celebrated victory against Italian colonial invaders in 1896. As his political convictions took shape, he took the nom de guerre Meles as a tribute to Meles Tekle, a young activist killed by the government.

At home, his administration tried to pull Ethiopia out of poverty, promising to drive growth and improve the lives of peasant farmers, and embarking on numerous energy and infrastructure projects.

He made major contributions to regional security, twice sending troops into Somalia to battle Islamist rebels, and deploying Ethiopian peacekeepers in several African hotspots like Rwanda, Liberia and Sudan’s Darfur and Abyei regions.

Susan Rice, the U.S. ambassador to the United Nations, described Meles as “unpretentious and direct” and a leader with a “world-class mind.”

“There was no shortage of occasions when as governments and friends, we simply, sometimes profoundly, disagreed,” she said in a speech at Meskel Square.

“But even as we argued, whether about economics, democracy, human rights, regional security or our respective foreign policies, I was struck by two things. Meles was consistently reasoned in his judgments and thoughtful in his decisions.”

Photo: A procession escorts the flag-draped casket of Ethiopia’s Prime Minister Meles Zenawi into the Meskel Square during his funeral ceremony in the capital Addis Ababa, September 2, 2012. Meles, praised for economic reform but criticised for authoritarianism during his 21-year rule of one the world’s poorest countries, died overnight on August 20 in a Brussels hospital after a long battle with illness. REUTERS/Tiksa Negeri