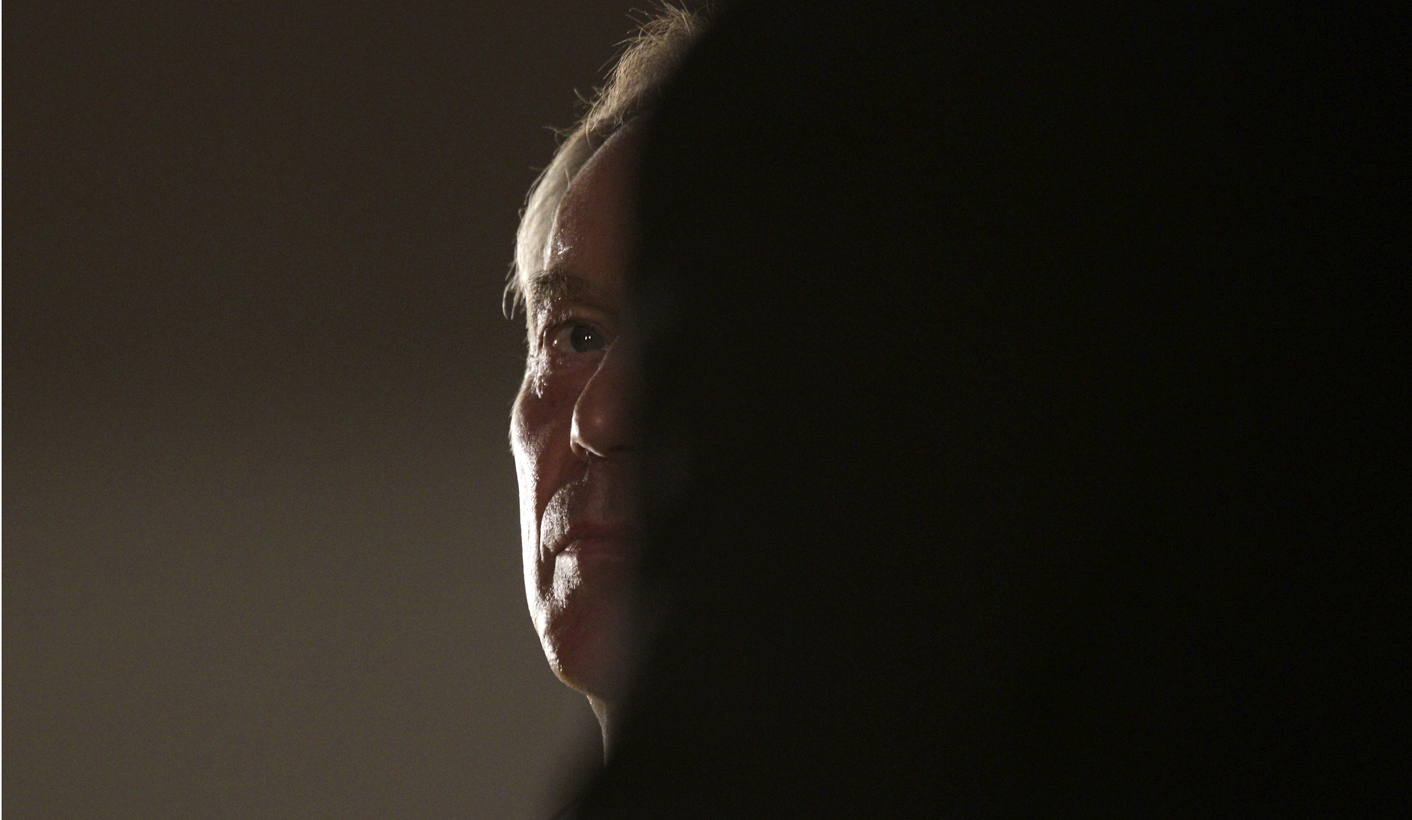 The Discovery Leadership Summits have become well-attended, prestigious annual events in Johannesburg. They feature a mix of international figures who distribute nuggets of wisdom, as well as hometown figures who give the proceedings a local gloss. Beside this usual mix, this year’s version unintentionally mixed a soupcon of international controversy into the day as well. It was the day Tony Blair came calling. By J BROOKS SPECTOR.

Somewhere along the way, the Arch began to have second thoughts about sharing the day, the stage and the audience with Tony Blair. The religious leader’s concern clearly was not because Blair had deserted the Anglican Church a few years back to convert to Catholicism. Rather, it was because of Blair’s vociferous support for and the participation of UK military forces in George W Bush’s invasion of Iraq in 2003 in pursuit of those ever-receding weapons of mass destruction.

After days of contemplation and listening to advice from friends, the retired archbishop announced he could not share a podium with Blair. The organizers were now left with a king-sized hole in their carefully constructed schedule, not to mention all their advertising gone pear-shaped. Tutu’s withdrawal from the speakers’ roster then provoked a significant public debate in South Africa – his supporters had a new chance to give the Arch a cheer and to decry once again the Iraqi invasion and everything that had happened subsequently in that unlucky land. His detractors were put in the position of saying things like, “I have infinite respect for Archbishop Tutu and all that he has done for the country, but I just can’t go along with his decision – and besides they wouldn’t even be on the same stage together. What gives, exactly?”

The Convention Centre had the kind of security one usually sees with the visit of an unpopular world leader come to address a contentious international dispute. Meanwhile, the South African Police Services were taking no chances outside the venue – there was a visible police presence in the vicinity of the Sandton Convention Centre, just in case. In case of what, one might ask. Now, overhanging the meeting was the threat someone might try to carry out a citizens’ arrest of Tony Blair and whisk him off to the International Criminal Court to stand trial as a war criminal of course.

The archbishop would not be moved after having announced his decision, but the show still had to go on. As a fall-back, the organizers invited sports medicine specialist Dr Tim Noakes to be an emergency presenter to fill the gap in the schedule. He received applause with his spirited presentation on leadership in sports, including a meditation on famed American football quarterback Joe Montana, and then he brought the house down with the surprise introduction of none other than Chad le Clos – the gold medallist from the recent London Olympics.

By the time Tony Blair came up to speak, the audience had listened to a full day of advice and observations that seemed to coalesce into nostrums to be brave, be courageous, be inventive, think out of the box, make technology your servant and not your master, be a catalyst for change, find a way to expand one’s business into a more holistic approach for the new age and find the inner truth of things. About the only thing the audience didn’t hear was, “Luke, Luke, remember the force”, perhaps because Obi-Wan Kenobi wasn’t available for this year’s session.

Okay, that isn’t entirely fair. One of the unique challenges of listening to speaker after speaker give advice throughout an entire day on how to be a creative, successful, lateral-thinking, innovative business-social-governmental leader is that much of that advice does seem to boil down to variations on the theme of, “If you want to be successful, to be a leader, you must be like me, except that you have to do it in your own way, in your own style.” Eight hours of this and all those multiplying iterations take on a quasi-gnomic quality of direction.

Interestingly, in his presentation at the beginning of the day, Kasparov made a particularly telling point about the power of thinking outside-of-the-box and not allowing one to be limited by the inevitable chorus of naysayers that always surround any new effort. Kasparov argued that at the time of the NASA Moon flights, those launches probably had access to about the computing power of a contemporary smart phone

Some time later, Kasparov went on, the engineers in charge calculated that the likelihood of a catastrophic failure – i.e., a crew left dead or marooned on the surface of the Moon – was as high as 20%. Now, if NASA’s leaders were tasked now with weighing in on a go/no go decision, given such odds in today’s increasingly litigious, risk-averse world, they probably never would have launched Apollo 11 in the first place. And as a wry commentary on humankind’s willingness to pull back from such advances, he offered a visual that compared the use of the computing power of the smart phone to launch a Moon shot versus using it to power a game of Angry Birds. Point made about the power and majesty of risk.

Ah, but of course readers are wondering what happened with Tony Blair. Blair came bounding out on stage at the end of the day and right at the start  made one of those British underplayed remarks about not having a chance to meet the Arch but, well, never mind, everyone gets to have their own view on things. Blair got a couple of boos and a shouted sentence or two of protest, but generally speaking the audience leaned in thoughtfully and listened carefully to what he had to say. No shoes were thrown in the making of this lecture. And what he said was interesting and engaging. At 59, Blair still gives the image of being youthful; filled with boundless energy and enthusiasm for the impact of ideas.

His central theme was that the world now exists in an era of low predictability rather than the easier to understand world that was the past. For example, fundamental geopolitical shifts that will profoundly affect the world his children will grow up in include the unstoppable rise of China and the transformative power of technology.

More closely to the present moment, the world now faces the possible corrosive impact of two major financial crises. One will be the baleful result that will occur if the US government is unable to resolve its budgetary issues and its legislatively mandated, automatic budget cuts push it over the so-called “fiscal cliff”. Then there is the increasingly pressing need for the Euro zone to strike a grand bargain before it is too late. Germany must accept the need for truly independent supra-national financial institutions, even as the flailing debtor nations must embrace the need for fundamental budgetary and financial reforms to heal this issue now and to prevent such a crisis in future.

In addition, the world is only now sorting out how to encompass “the eruption of democratic movements” that has taken place across the Middle East. The problem, of course, is that once one opens a lid that has been tied down for a long time, all kinds of things will come out of the pot.

In Blair’s view, people should not be put in the position of making a false choice between tyranny and terrorism. The West may be becoming fatigued by all of this sturm und drang, but the right engagement will be to aim for an evolution in this region while simultaneously recognizing that much of the success of the transformation will come from raising the quanta of increasingly widespread economic prosperity. Meanwhile, the forces of change need to understand – and embrace – the idea democracy is not just about coming to power, but also in how to use that power effectively and appropriately once it is held.

Turning more introspective (and personal) Blair reflected on his own experience as a government head and said that he had learned – perhaps the hard way – that the essence of democratic government is the making of hard choices. Put in terms of today’s issues, for example, what should be done about Syria’s civil conflict or the conundrum of Iran? He added that with respect to Iraq back in 2003, while the proximate cause of the invasion was those elusive WMD (“oh well”, you could almost hear him sigh), the irreducible fact remained Saddam Hussein was a brutal dictator who had poison gassed the Kurds and violently repressed the rest of the country until he was overthrown. What, ultimately, is wrong with that result?

Outside the Convention Centre meanwhile, threats of a massive protest against Blair’s presence at the summit translated into damp squib. A small group of protesters gathered outside but failed to make any impact on proceedings.

With regard to Africa, Blair reminded his audience he had been intimately involved with Africa’s developments even before the Gleneagles Commonwealth meeting that had focused so much on African development issues. His ambition for Africa now was to be able to make such a success of development on the continent that we could “wave the donor community good bye”.

And as far as any secrets of leadership, Blair told the story of his coming into 10 Downing Street as the new prime minister. As he told it, tradition has it that the permanent staff lines up to offer a farewell to the outgoing prime minister and he and his family depart out the back. Then they greet the new one who is coming in through the front door. Blair said that when his predecessor had left, the staff had been crying and then the cabinet secretary turned to Blair and said, “Now what?” For Blair, it seems, leadership appears to mean beginning to find an answer – or answers – to that metaphysical question. DM