Apartheid and the Marikana murder charges: a common purpose indeed 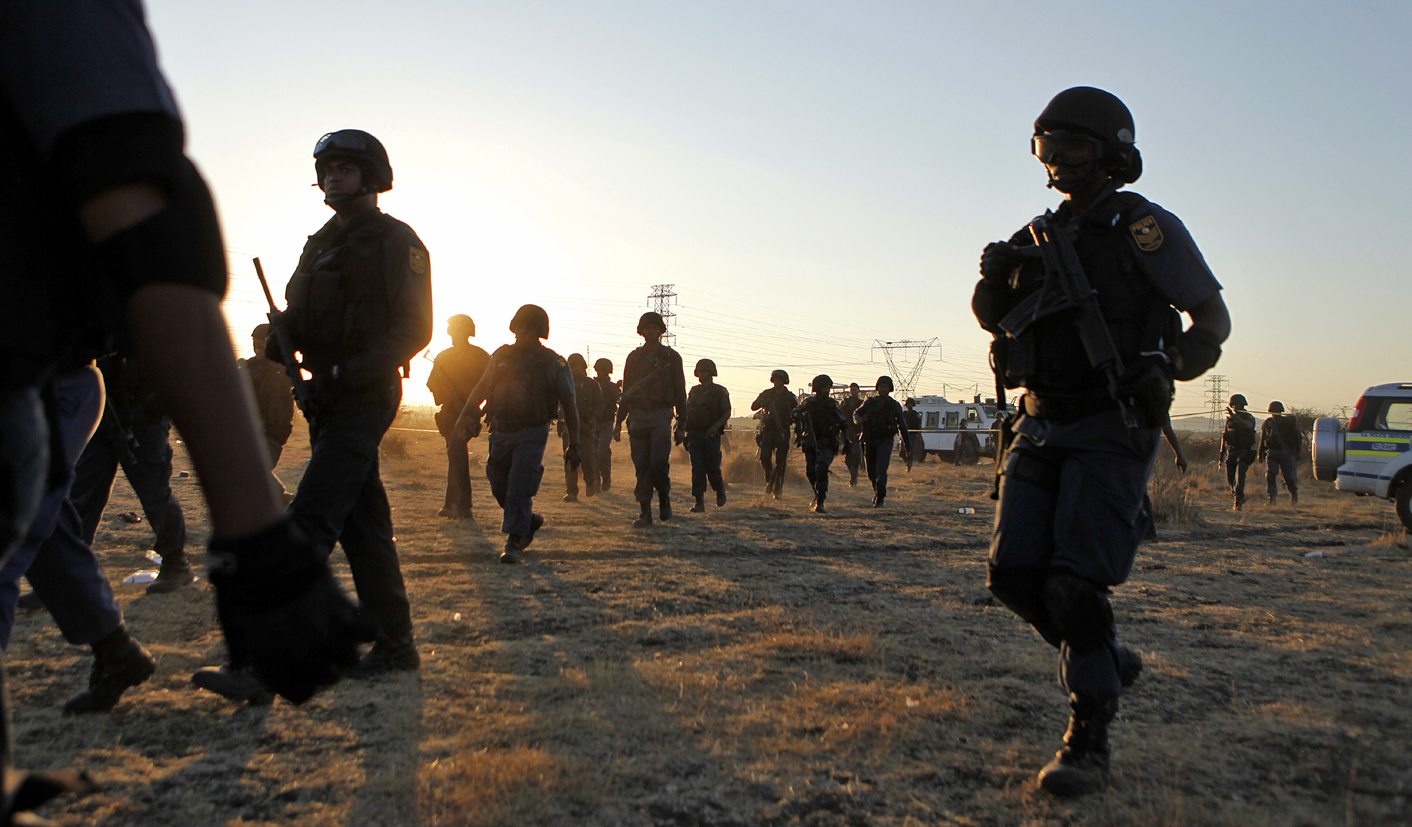 On Thursday, 270 miners were charged in the Ga-Rankuwa Magistrate’s Court with the murder of 34 of their comrades, who were shot and killed by police at Lonmin’s platinum mine in Marikana in the North West. A further, 78 injured by the same force, have realised a charge of attempted murder for all accused. The legal vehicle used to charge the accused in the Marikana massacre case is called 'common purpose'; it was masterminded by the architects of Apartheid and used during the darkest times to send MK cadres to the gallows. By MANDY DE WAAL.

The son of a domestic worker, Solomon Kalushi Mahlangu, was a revolutionary spirit who’d listen to Radio Free Africa broadcast all the way from Lusaka, Zambia right into his home in Mamelodi, northeast of Pretoria. Friends always thought of him as a revolutionary, so it didn’t come as a surprise that just after the 1976 uprisings (while still in his teens), he’d flee South Africa to become part of the ANC and train as an MK cadre.

Eventually stationed at Funda camp north of Luanda, Angola, under Joe Modise, Mahlangu would be well versed in military combat and sabotage. Soon afterwards he’d become part of a mission overseen by Siphiwe Nyanda (former SA defence for chief and communications minister – now Jacob Zuma’s personal representative in Parliament). Mahlangu’s assignment – together with a couple of other MK operatives – was to infiltrate South Africa and bring arms, ammunition and revolutionary literature in for the first anniversary of the ’76 insurrection.

The plan was thwarted when Mahlangu arrived in Johannesburg with his comrade Monty Motloung and another operative; the trio were accosted by a policeman shortly after getting onto a taxi in Diagonal Street. There was a tussle, and an AK47 and hand grenade toppled out of the packages the cadres where carrying. A chase ensued through the city centre and the MK pair dashed into a department store where Motloung opened fire and killed two civilians.

Police surrounded the building, captured the pair and subjected them to brutal torture. Motloung was so badly assaulted that he suffered brain damage and was declared unfit to stand trial. Mahlangu never held a gun during the pursuit and subsequent shoot-out with police, but that didn’t stop the state from charging him using an Apartheid-inspired legal dictum called “common purpose”.

If this sounds familiar, that’s because it is. “Common purpose” is the same Apartheid-created legal instrument that was used to charge all 270 accused Marikana miners with the murders and attempted murders of their comrades, despite the whole world seeing in broad daylight that the police pulled the triggers.

Instituted by the Apartheid state, the doctrine of common purpose was an extremely convenient legal principle employed by the architects of that evil to not just prosecute the proverbial smoking gun, but to ensure that any and all accomplices could be charged with the same weight of law as those who pulled the trigger.

Even though Mahlangu’s lawyers were able to convince the judge that presided over the trial that their client did not fire the gun that killed two civilians, using the dictum, it was declared that the MK operative shared a common purpose with his cadre, and therefore was as guilty and culpable.

Mahlangu was found guilty and sentenced to death, and despite a massive international outcry and lobbying over years to get the verdict over-turned, the ANC operative was hanged on the 6th of April 1979. Facing the gallows, Mahlangu’s final defiant message was: “My blood will nourish the tree that will bear the fruits of freedom. Tell my people that I love them. They must continue the fight.”

And so it is a most bitter irony that “common purpose” rears its ugly head from its Apartheid grave once more to haunt South Africa’s young democracy by becoming the vehicle to hold the 270 Marikana miners culpable for the deaths of their fellow protestors and colleagues. “Officially the 270 accused were charged with murder,” National Prosecuting Authority spokesman Frank Lesenyego told Daily Maverick. “To confirm, the charges against all 270 are murder and attempted murder.”

“They have charged all these people, so what is going happen is on Monday (3 September) we are going to address the schedule that they have brought before court, and the charges that they have brought against all these miners,” said a spokesperson for the miners’ legal team. “They have been charged with murder in connection with those 34 people who passed away on Thursday the 16th of August. It is a very sensitive matter, so I can’t go into the details of the charges.

“Given [that] the matter is as sensitive as it is, I really don’t want to get into the merits of the case. It is proper for me to confirm that they have amended their charge sheet to murder (and attempted murder), and that we as a team are now on our way to prepare for Monday,” the attorney, who is part of a larger team representing the Marikana miners, said after leaving the Ga-Rankuwa Magistrate’s Court.

In his column “Abuse, Inc: The ‘miners made us do it’ murder charge” Daily Maverick opinionista and constitutional law expert Pierre de Vos explains that in Apartheid’s dying days, the state increasingly relied on common purpose to criminalise the actions of all people involved in protesting the Nationalist government.

“The state began to fall back on the common purpose doctrine, which originated in English law and was introduced into South African law via the ominously named ‘Native Territories Penal Code’. At the time the courts interpreted this doctrine to apply to all members of a crowd who had ‘actively associated’ with criminal conduct committed by one member of the crowd – even if those charged were not involved at all in the commissioning of the crime,” writes De Vos.

“In 1988, for example, 26 people were convicted of the murder of a councillor in Upington because the state could prove (although even that proof was rather flimsy) that they were all members of the crowd who congregated outside the councillor’s house before the killing occurred. The so-called ‘Sharpeville 6’ were similarly convicted and sentenced to death with the help of the common purpose doctrine and only escaped being killed by the State thanks to the moratorium placed on the execution of the death penalty by FW de Klerk in February 1990.”

The Claude Leon Foundation Chair in Constitutional Governance states that it is preposterous that prosecutors are using common purpose, unless it is for a very specific motive. “Neither can they be convicted of murder by relying on the common purpose doctrine. No court is going to find that those charged intended to make common cause with the police to shoot their own comrades. Neither will a court find that the miners acted in a way to demonstrated that they associated with the actions of the police who killed the 34 miners,” De Vos writes.

“I cannot imagine that even the out-of-their-depth prosecutors and members of the NPA leadership really believe that any court will find the miners guilty of murder for the killing of their comrades by the police. This means they charged the miners with murder, knowing full well that the charges would never stick, with an entirely different aim.”

Meanwhile the news of this bizarre charge is reverberating around the world, and as it does, South Africa’s reputation is being ravaged, but not half as much as that of the ANC. “The Marikana debacle has dented the image of the ANC internationally, because people around the world know that the country is run by the ANC. The ANC has always projected itself to everybody as a progressive party that has moral standing. I think that morality has gone after Marikana,” political analyst Prince Mashele has said. “Very many critical thinkers and organisations internationally are asking pointed questions about the ANC.”

Once the world rallied for the ANC against Apartheid, but today the likes of Spiegel are telling it like it is. “The Self Destruction of Africa’s ANC” glares a story headline from Der Spiegel’s website. “South Africa’s legendary African National Congress, the party of Nelson Mandela, is destroying itself. Corruption, cronyism, internal divisions and, more recently, the mine massacre in Marikana are draining support from the party’s base – and destroying the country’s economy,” reads a story in the Hamburg-based news title that has a weekly circulation of a million, and is one of the most visited online news sites in Germany.

“Someone who is sitting elsewhere in the world, and who is considering investing in mining, might even consider South Africa, but there will always be questions attached to this country as an investment destination, particularly with regards to mining,” says Mashele, adding: “The events at Marikana have also done terrible damage domestically. In a way, the images of Sharpeville have been replaced. People are now asking what the difference is between the police today, and the police yesterday.”

Photo: Special task force members and policemen walk back to their cars after protesting miners were shot outside a South African mine in Rustenburg, August 16, 2012. South African police opened fire on Thursday against thousands of striking miners armed with machetes and sticks at Lonmin’s Marikana platinum mine, leaving several bloodied corpses lying on the ground. A Reuters cameraman said he saw at least seven bodies after the shooting, which occurred when police laying out barricades of barbed wire were outflanked by some of an estimated 3,000 miners massed on a rocky outcrop near the mine, 100 km (60 miles) northwest of Johannesburg. REUTERS/Siphiwe Sibeko