Marikana survivors may be charged with murdering own comrades 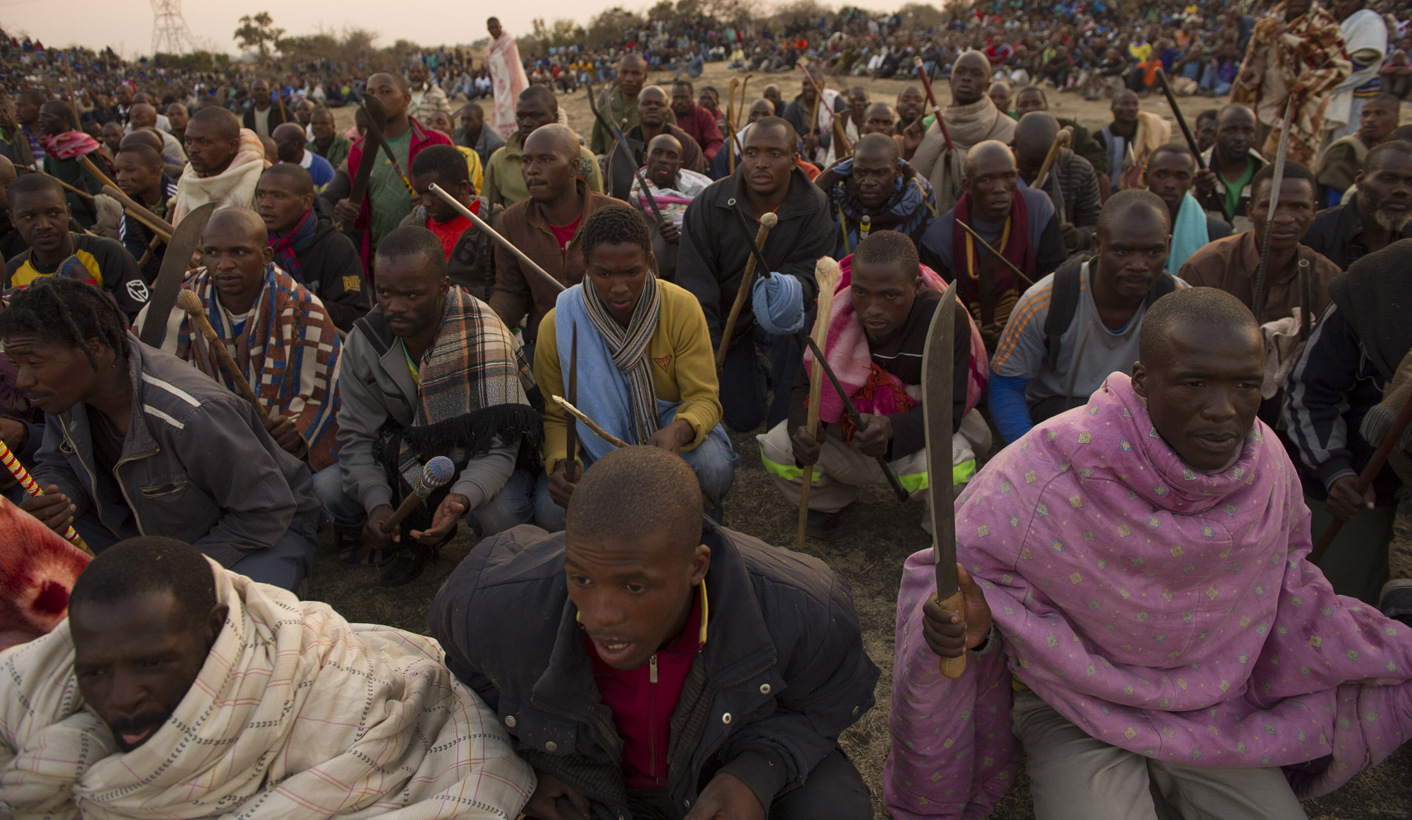 A throng of thousands of angry protestors face off against a battalion of police armed to the hilt at Lonmin’s Marikana mine on the North West. The police shoot 112 of them, killing 34 and wounding another 78. Over 250 miners are arrested in the wake, and because of some bizarre technicality could now stand accused of murdering their own. By MANDY DE WAAL.

At the end of Thursday 30 August 2012, South Africa, and the world, should know if the Marikana miners currently detained in the North West will be charged with murder and attempted murder. Not for the deaths preceding the Marikana massacre, but for the death of 34 of their comrades who were shot and killed by police on Thursday 16 August 2012. The miners also look set to face charges of attempted murder for the 78 miners who were injured by police on that same day.

If, dear reader, you are shocked to your core by the knowledge that these miners could be charged, despite the fact that the police pulled the trigger, so are we. But Daily Maverick has been told by the National Prosecuting Authority’s North West regional spokesman, Frank Lesenyego, that this is all part of a technicality which could realise a ruling on these charges in the Ga-Rankuwa Magistrate’s Court, where preliminary hearings have been underway this past week.

“If you have a situation whereby there are suspects that are armed with guns, and they confronted or they attacked the police, and a shooting takes place and there are fatalities – even when those who died where amongst the suspects – those who were arrested are charged with the murder of those who died, because they knew very well that when they are armed…that a fatality can happen,” Lesenyego tells Daily Maverick.

If you’re nonplussed, rest assured so were we. And that’s why Daily Maverick asked Lesenyego to explain this technicality that could be employed to charge the accused with murder and attempted murder.

But how is it possible that the miners could be charged with the murder and attempted murder of their fellow protestors, Daily Maverick asks. “If people confront members of the police who are armed, knowing very well that a shooting is going to take place, they must also – at the back of their minds – understand that there will be fatalities. They know people will die when they do that. There are technicalities within those legalities, so in a situation like that, when a shooting takes place and the fatalities occur, people who are arrested and are from that group are also charged with murder.”

Lesenyego is cryptic about who amongst the some 270 accused will be charged with murder or attempted murder, but proffers: “You have to ask yourself are we going to charge each one of them with murder, or charge only some of them. You had best wait for tomorrow (Thursday, 30 August 2012) to find that out.”

It all sounds quite befuddled, but then these initial proceedings – which have mostly dealt with bail matters – in the Ga-Rankuwa Magistrate’s Court have arguably been a total travesty. The accused are many and are scattered in a number of police locales because they can’t be contained at one police station.

The accused are brought into the court in dribs and drabs on a matter that could see them face the ultimate charge – one of murder – and then have to shuffle back to the police cells where they are being held, to inform their fellow accused of what is going on.

“How is it a fair trial when your bail application is being heard in court and you are not there?” legal counsel for the defence asked, after lawyers for the miners had lambasted the court arrangements.

The defence also raised concerns about injured miners being detained without getting medical treatment, and said some miners were injured on the day of the massacre while others were injured after allegedly being assaulted by police. There are also accused with chronic illnesses who are not able to access medication.

At the same time that murder and attempted murder charges are being prepared to be brought against the Marikana workers, the Independent Police Investigative Directorate (IPID) is investigating allegations of torture against police at Phokeng Police Station and Mogwase Police station, where the miners are being held.

“We are investigating allegations of assault – assault with intent to cause grievous bodily harm, and common assault,” Moses Dlamini, IPID’s spokesperson, told Daily Maverick. “It is more than 150 at the last count, but the investigation is still on. We will only know the total number at the end of the investigation.”

Marikana is turning into the messiest human rights debacle in South Africa’s post-Apartheid history, and despite the mounting global interest, the state’s response can only be described as ham-handed. It is a callous and clumsy calamity that continues to expose the state’s inadequacy at every turn. DM