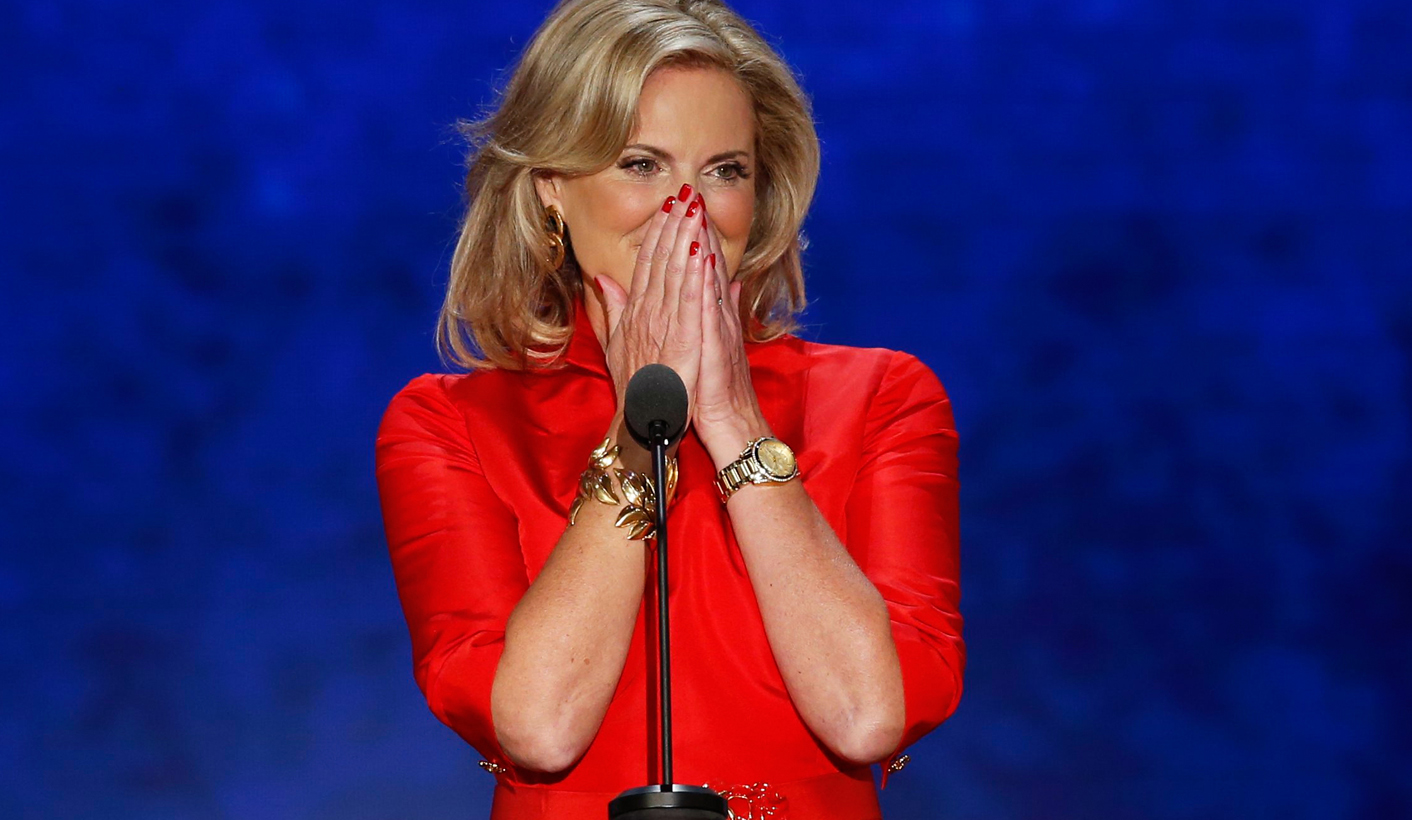 By the time Mitt Romney’s wife, Ann, and New Jersey Governor Chris Christie, a possible future presidential aspirant, had finished their respective speeches, viewers might have been forgiven for wondering if somehow the Republican convention had contrived to nominate the wrong people for president and vice president. By J BROOKS SPECTOR.

Maybe Christie should be the Republican’s presidential candidate instead of keynote speechifier – with Ann Romney as his running mate instead of Paul Ryan. Christie gave a rock’em-sock’em case for giving Barack Obama the boot even as he barely mentioned the incumbent president by name. Ann Romney went into empathetic overdrive to paint her spouse as a caring, warm human being. And that dress! It was a shade of near-iridescent red seldom seen beyond Republican Party campaign posters.

Tuesday was the first real day of the GOP convention after Monday featured an opening moment and a quick adjournment until the next day, its events truncated to a couple milliseconds when Tropical Storm Isaac seemed determined to bear down on Tampa, where the Republicans were gathering.

So it was on Tuesday that the delegates officially voted to nominate Mitt Romney to stand against Barack Obama, and amidst various bits of speechmaking, Ann Romney and Chris Christie did their respective bits to rev up the crowd and give them something – anything – to cheer about, even as television networks had an on-screen insert noting the progress of Hurricane Isaac’s course towards New Orleans – seemingly in homage to Hurricane Katrina’s path of destruction seven years ago.

Striding up to the podium and speaking with his typical straightforward, take-no-prisoners bluntness and swagger, Christie told the crowd, “It’s time to end this era of absentee leadership in the Oval Office and send real leaders to the White House. America needs Mitt Romney and Paul Ryan, and we need them right now.” Christie scolded the incumbent for brushing off addressing the nation’s economic problems and insisting instead on nursing a desire to coddle them with “big government.” Or, as Christie charged, “Their plan: Whistle a happy tune while driving us off the fiscal cliff, as long as they are behind the wheel of power.”

Christie’s message keyed in on the question of leadership, chastising the president by saying, “It takes leadership that you don’t get from reading a poll. You see, Mr. President – real leaders don’t follow polls. Real leaders change polls.” Not particularly subtle, that, but that’s what the keynote speech is for, to get those juices flowing.

Christie at one point had actually been considering giving Romney a run for his money for the presidential nomination but eventually declined to do so. Then, for a while at least, he was seen as a possible vice presidential nominee. Eventually, he settled for the keynoter’s spot. Some observers have noted already that a good keynote speech can be a stepping-stone to the nomination in the following electoral cycle – especially if the actual nominee falters on Election Day. A good keynoter then becomes a potential candidate who has already had a tryout on the national stage at a convention. Come to think of it, isn’t that what the current president did in 2004? And so speculation about Christie’s future in Republican politics will almost surely build now that he has delivered a speech that punched the right buttons, at least from the perspective of his party’s faithful.

Getting into his homily on leadership, Christie argued it was time to move on from an administration (Obama’s) that has let the country drift and settle on a candidate who can steer the country in a different direction in economic policy. He said there was only one man around who was prepared to do that, contrasting Romney to the current leadership, asserting that Obama’s team “have decided it is more important to be popular, to do what is easy and say ‘yes,’ rather than to say ‘no’ when ‘no’ is what’s required. It’s been easy for our leaders to say not us, and not now, in taking on the tough issues. And we’ve stood silently by and let them get away with it.”

Now is the time, Christie argued, for real leaders like Romney and Ryan, who are prepared to tell the country the tough facts about popular but increasingly expensive national programs like Social Security and Medicare – and that voters will reward such honesty with support and understanding. (This is in contrast to the conventional political wisdom that a risky rebuild of programs that underpin the living standards of the nation’s older citizens is a guaranteed pathway to quick political death.) Or, as Christie said, “If you’re willing to hear the truth about the hard road ahead, and the rewards for America that truth will bear, I’m here to begin with you this new era of truth-telling.”

Early editorial opinion was, not surprisingly, not totally convinced. The New York Times, a frequent critic of Christie’s performance as governor in New Jersey over the past two years, wrote that he had “angrily demanded that the American people learn the hard truths about the two parties, but like most of those at the microphone, he failed to supply any. He said his state needed his austere discipline of slashed budgets, cancelled public projects and broken public unions, but did not mention that New Jersey now has a higher unemployment rate than when he took over, and never had the revenue boom he promised from tax cuts.

“‘We believe in telling our seniors the truth about our overburdened entitlements,’ he said, but his party has consistently refused to come clean about its real plans to undo Medicare and Medicaid. ‘Mitt Romney will tell us the hard truths we need to hear to put us back on a path to growth,’ he said, but Mr. Romney has consistently refused to tell the truth about his tax plan, his budget plan, and his health care plan.”

By contrast to Christie’s assignment, Ann Romney, in her earlier speech to the convention, focused mainly on depicting her husband as the Republican and Mormon version of a kind of rich man’s salt-of-the-earth mensch. As she said, “I read somewhere that Mitt and I have a ‘storybook marriage’. Well, in the storybooks I read, there were never long, long rainy winter afternoons in a house with five boys screaming at once. And those storybooks never seemed to have chapters on M.S. or breast cancer. A storybook marriage? Nope, not at all. What Mitt Romney and I have is a real marriage.”

Amid her descriptions of their life together in their great, roiling rambunctious but loving family, she painted her husband as the kind of man who “will not fail. This man will not let us down. This man will lift up America.”  And, she added, “At every turn in his life, this man I met at a high school dance, has helped lift up others. He did it with the Olympics, when many wanted to give up. This is the man who will wake up every day with the determination to solve the problems that others say can’t be solved, to fix what others say is beyond repair. This is the man who will work harder than anyone so that we can work a little less hard.”

Trying to scale the cliff of the Republican deficit in its support from women this election cycle, Ann Romney argued that as women, “We’re too smart to know there aren’t easy answers, but we’re not dumb enough to accept that there aren’t better answers.” She was carrying out what many Republican strategists insist is a pressing need to give more nuance to the portrait the public still holds of their candidate. After her Tuesday performance, it may end up being possible to say her stuff was better than anything her husband has done on that score so far. And she wore that red dress that held everyone’s attention like a laser beam.

On Wednesday night, the convention will try to put a human, caring face on the man who would cut Medicare as well as dozens of other federal benefit programs – portraying Paul Ryan as a magnanimous but purposeful national vice presidential candidate, rather than an axe-wielding budget cutter – even as Hurricane Isaac tests those rebuilt levees that form the barriers designed to keep New Orleans from turning into a city under water again. TV viewers will get to see both dramas unfold simultaneously in prime time.

Then, on Thursday, Mitt Romney will deliver a speech that either confirms or recasts his reputation with voters. Next week, as the Labour Day holiday on Monday marks the end of summer, the Democrats have their chance to put the best possible face on their candidate for president – presumably casting as much blame as possible on the Republicans in Congress for whatever has gone wrong in the past three and a half years – and promising to do better next time if their candidate can just get a second chance. DM