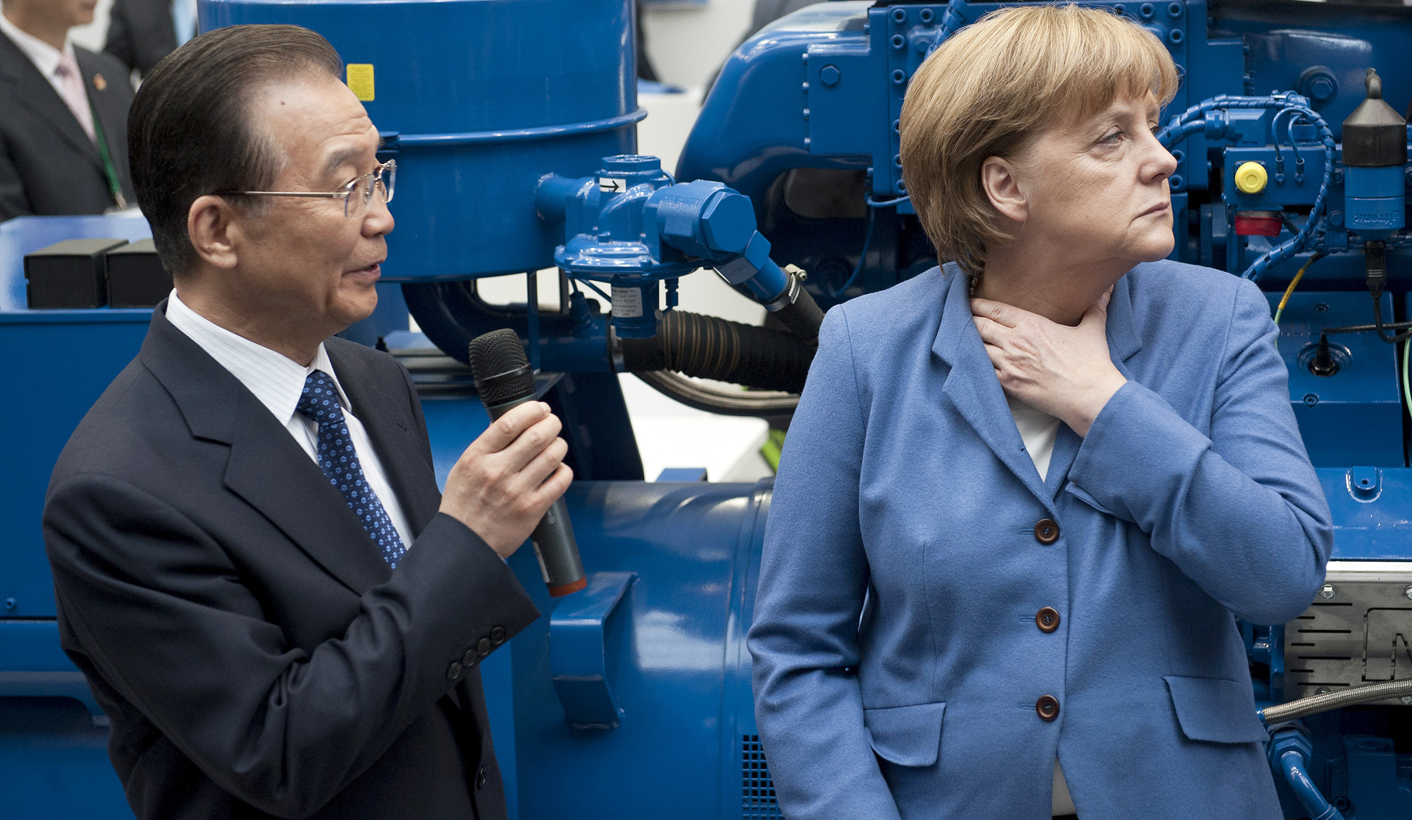 Germany's Angela Merkel makes her second trip to China in half a year this week, hoping to strengthen booming trade ties and obtain assurances from Beijing that it will support the fragile euro zone by buying the bonds of its stricken southern members. By Noah Barkin.

The relationship between the world’s top two exporters went through a decidedly chilly phase after Merkel received the Dalai Lama in Berlin in 2007, but she has toned down her criticism of China’s human rights record in recent years and shifted her focus to economic links.

In a sign of how much ties have improved, Merkel will be taking seven ministers with her for full-fledged consultations between the two governments, a format the countries launched last year and until recently was reserved for Berlin’s closest European partners.

The trip is the sixth to China since Merkel took office in 2005. She was in Beijing as recently as February, then hosted Chinese premier Wen Jiabao at the Hanover trade fair in April.

On this trip, which kicks off on Thursday morning in the Chinese capital and lasts through Friday, Wen will give her a tour of the Forbidden City – the Beijing landmark that housed China’s emperors – and the leaders will travel in a high-speed train to his hometown of Tianjin, visiting an Airbus factory where a mega-deal for 100 narrow-body jets could be signed.

German officials say the talks will cover a wide range of issues, from energy, climate and cultural links, to sensitive subjects like Syria.

But the focus for Merkel and her delegation – which includes some 20 top executives from bluechip firms like EADS, Siemens and Volkswagen – will be reassuring Chinese leaders about the stability of the euro zone and Germany’s determination to keep it together.

“We need to convince China, as we do other investors, that euro investments are stable and secure,” a senior aide to Merkel told reporters on Tuesday in Berlin.

Big Chinese investors were forced to take substantial losses on the Greek bonds they held earlier this year when Athens pushed through a debt restructuring backed by its European partners, including Berlin. German officials now acknowledge that this hit Chinese confidence in the currency bloc.

On Thursday evening, Merkel will participate in a dinner with China’s central bank chief, finance minister and the head of its $480 billion sovereign wealth fund, to try to convince them Greece was a one-off and that battered Spanish and Italian bonds are attractive, aides say.

Working in her favour is the knowledge that China has a huge interest in seeing the euro zone hold together. Europe is China’s biggest export market and Beijing sees the single currency as an important counter-balance to the U.S. dollar.

“We want the euro zone to be stable and whole. We have vast assets in Europe. If the euro zone suffers it will have a huge impact on China,” said Ding Chun, director of the Centre for European Studies at Fudan University in Shanghai.

Still, Beijing has stopped short of offering specific commitments of cash to help shore up European banks or sovereign borrowers and Merkel is unlikely to receive more than encouraging words in Beijing.

The reality is that China’s interest in Germany has soared over the past decade, but at the expense of other countries in Europe. While Germany’s power and influence have grown as the crisis has deepened, France is seen in China as weakened and Britain marginalised.

Merkel has become the go-to leader in Europe. In Brussels, some officials worry that what some experts are now calling a “special relationship” between Berlin and Beijing could be undermining a joint European approach to China.

Germany and China are a perfect economic fit: German firms produce the high-quality machinery and equipment Chinese counterparts need to produce their goods. China is a giant, growing market for German cars and other manufactured wares at a time when demand from European trade partners is drying up.

Mercedes sells more high-end S-Class sedans in China than any other country. And Volkswagen, the first foreign carmaker to set up shop in China three decades ago, sold 2.3 million vehicles there last year, twice as many as in Germany.

Bilateral trade has surged in recent years. In 2011 it totalled about $180 billion, nearly double what it was just five years before. Wen, who will stand down soon as part of China’s transfer of power to a younger generation of leaders, vowed during his April visit to boost that to $280 billion by 2015.

Still, all is not well. German firms complain about intellectual property violations, shareholding limits and political interference in their business.

Earlier this year, officials close to VW said the firm’s long-term partner in China FAW had been stealing technology from their joint venture on a vast scale to produce their own engines and transmission systems.

“The best case scenario for German companies is that they continue to flourish, innovate and stay a few steps ahead of their Chinese rivals. The worst case is that they get squeezed into luxury niches,” said Hans Kundnani of the European Council on Foreign Relations.

“The bet that both countries are making is that by setting up these government consultations, the conflict can be kept to a minimum. But we may look back on this relationship and see 2012 as the high point. As China moves up the value chain and competition increases, there will be more problems.”

Before this visit, she received a joint letter from German journalists working in China complaining of harassment from Chinese authorities. Merkel’s aides say she will take up the issue in Beijing, but make clear she will do so in private.

“The simple truth is that the human rights issue has been pushed into the background, overshadowed by the booming economic ties and the euro debt crisis,” said Eberhard Sandschneider, a China expert who heads the German Council on Foreign Relations. DM