South Africa: Nation at a tipping point or democracy in action? 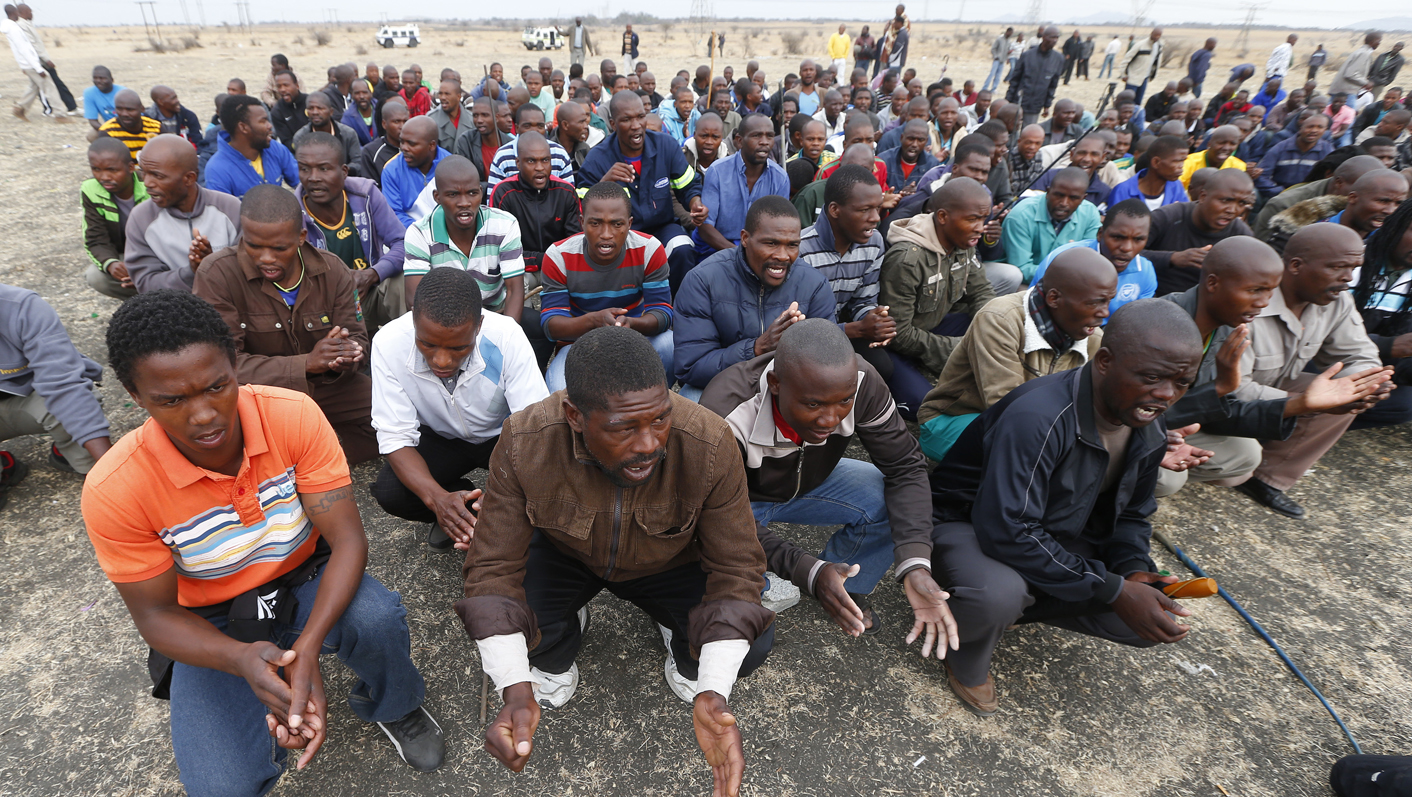 The Marikana massacre earlier this month evoked many memories of South Africa’s violent past and aroused fears that civil unrest and community frustrations with delivery backlogs were about to boil over. Is South Africa heading for a (as yet) leaderless revolution, or is it just an extremely engaged but angry society? So far, the ANC appears to fear more the political scavengers than the mass discontent. By RANJENI MUNUSAMY.

For the past decade, community and service delivery protests have been a constant feature in the day-to-day activity of South Africa. Most of these pass without registering on the national radar, even though they are a recurring indicator of the level of discontent and frustration on the ground.

After the Marikana massacre, there were fears in some quarters that the violent strike and the police reaction to it would mark some kind of tipping point or provoke further unrest in the country. Like the nationwide xenophobic violence in 2008, the violent nature of the strike at the Lonmin platinum mine followed by the killing of 34 mineworkers by the police stunned South Africa and forced society to assess the root causes which provoked such bloodshed.

Political analyst Ebrahim Fakir, who has written extensively on the rise and prevalence of social movements in the country, said predictions that the intermittent social unrest would lead to an “Arab Spring” situation were somewhat unfounded. The Arab Spring, the wave of revolutionary protests which swept the Arab world and toppled several governments, began somewhat expectantly in December 2010 and provoked unprecedented civil resistance in what had been, up to then, submissive societies.

“With the Arab Spring, the premise was that they were fighting against illegitimate governments. Here, the legitimacy of government is not in question. Rather, it is the credibility of its operations: what it can effectively do to improve people’s lives. It is about its ability to function or not, not the right to exist,” Fakir said.

In a paper titled Institutional Restructuring, State-Civil Society Relationships and Social Movements, Fakir wrote that the degree to which citizens have the means to access government has not been encouraging. “A finding that approximately only 6% of citizens have had direct contact with government or party officials, suggests a democracy that is remote from citizens,” he wrote.

“The past few years have seen a resumption of social movement politics and activism which, behind a common rejection of the ANC’s apparent conservative turn in macroeconomic policy, display important differences from mainstream organisations (especially the Congress of South African Trade Unions [Cosatu] and the South African Communist Party). These movements have, to a significant extent, originated at the level of urban localities in response to the government’s restructuring of local government and municipal service provision. Whatever the limitations of the new social movements may be in an organisational, political and strategic sense, they represent different trajectories in our evolving political discourse and political practice and thus warrant some attention,” Fakir said in his paper.

He concluded that social movements are in general fragmented, in the sense that they are in some cases nationally based, or more often, locally based. “They also usually deal with a single issue or with a single dimension of a problem, without attempting to articulate it into an overall alternative political project. They are largely spontaneous social and political ruptures which are temporary in nature, due to the transitory nature of issues that they deal with, impacting on their long-term sustainability as a political project.”

Marikana, however, is a distinctive phenomenon. While the underlying roots might be same—political and social inequality and the lack of social power—the drivers are very different, Fakir said. “Much of the service delivery protests are sporadic uprisings, leaderless, ambiguous and flash in the pan. Marikana was not like that. It had very specific dimensions, such as the inter-union rivalry, they have identifiable leaders, there is a level of organisation and the issues are identifiable and clear.”

While the Marikana massacre might have shaken up society through the extreme nature of the violence, killings and damage to property have become common in civic protests.

Fakir and his colleague at the Electoral Institute for the Sustainability of Democracy in Africa, Maureen Moloi, researched the spate of violent uprisings in the town of Balfour, particularly the township of SiyaThemba, since 2009, which prompted a visit by President Jacob Zuma. Violent eruptions continued even after the president’s visit, showing the level of anger and discontent in the community.

They found that the reasons for the protest were high levels of frustration, mainly with the failure of government at the national, the provincial and local levels to respond to the concerns raised by the residents.

“Community members cite government’s unresponsiveness and the lack of attention of the relevant institutions of state and authorities in government to the service delivery issues they raise as the primary reason for their frustrations—which constitute almost a shopping list,” Fakir and Moloi wrote.

As with Marikana, the authorities called in the police to intervene at Balfour, which aggravated the situation.

“Instead of engaging with the community, the municipality’s response was to send in law enforcement agencies, which in turn served to inflame the volatile situation further. Some residents argue that the violence was deliberately used as a vehicle to draw attention to SiyaThemba, which appeared to be ignored by everyone.”

Alarmingly, the tendency to use violence as a tool of protest is increasing in frequency. In most cases, protesters say they opt for violence as their voices would not be heard otherwise.

Fakir and Moloi wrote: “The construction of democracy as both a system of government and a culture by and through which citizens associate among themselves and relate to government institutions requires checks between the able agency of citizens to exercise and advance their rights and institutions which must help them to do so. For this, an effective system of participation, checks and balances, oversight and accountability, responsiveness and consultation are required.

“In the case of SiyaThemba almost all of these elements appear to be absent, with citizens appearing to express frustrations through violence because of a government and private sector that is perceived to be unresponsive.”

In the case of Marikana, the mass killings have prompted national government intervention to assist the community, but there is still no clarity how the original rock drill operators’ wage dispute will be resolved. The normal rules of labour dispute resolution have been abandoned in an atmosphere of high emotion and intensified defiance by the strikers.

If government intervenes to resolve the dispute, it could set a dangerous precedent in industrial relations. Fakir said the massacre might have other derivatives as well. The state could wake up to the stark levels of discontent in the mining sector and jack up the institutional edifice to be more vigilant and responsive. The massacre could also push the mining sector into negotiating voluntary agreements to reduce the pay disparities between workers and the executive.

But in order to be fully responsive to the lessons of Marikana, the state would have to be alive to all the failings in the system which could have prevented the massacre from happening. For example, Fakir said, South Africa’s intelligence services are clearly not serving the country with information to avoid social confrontation, conflict and political risk. They are concerned rather with servicing private political battles of those in power. One of the shortcomings of the commission of inquiry into the massacre is that it does not probe the failure of the intelligence services to detect what was brewing at Marikana.

Of great concern to the political elites now is the swiftness with which expelled ANC Youth League leader Julius Malema exploited the Marikana situation and used the platform to successfully attack Zuma and his government. While the ANC has been generally silent on the matter, Secretary General Gwede Mantashe said yesterday that the party’s special National Executive Committee meeting has asked that the shooting in Marikana not be used for political gain.

“The special NEC appeals to all South Africans that nobody must use the tragedy for political and opportunistic reasons,” Mantashe said in a statement.

As with its economic freedom campaign, the Youth League—former and current—is tapping into the discontent in society against the ANC to mobilise support. Youth League strategists have the added voice of the Friends of the Youth League to push the bounds and articulate what members of the ANC are not allow to say publicly.

But until the ANC pays more attention and becomes more responsive to what communities all over the country are shouting for, the propensity for snowballing civic unrest will increase. It is not the ANC Youth League in all its dimensions that is a threat to the party, but an angry and frustrated populace that is not being heard. Malema’s ability to lead a revolution is only possible as long as the ANC remains unresponsive.

Violence by and against civil society has no place in a democracy but will continue to be used as a tool of protest when all else fails. Marikana made us look over the dangerous precipice where the wave of violent protests could someday lead our restless nation. DM

Photo: Mine workers gather while on strike near the scene of a shooting at Marikana, in the north western province August 27, 2012.  Labour strife returned to South Africa’s platinum sector on Monday, derailing London-based Lonmin’s efforts to restart mining and fanning fears of a resurgence of the violence that has killed 44 people this month. The strikers, who are rock driller operators, have been demanding a monthly wage of 12,500 rand ($1,500) for their tough and dangerous job. The company says they get about 9,800 rand with an average monthly bonus of 1,500 rand.  REUTERS/Mike Hutchings