2016: Obama’s America – How a documentary might undo a presidency 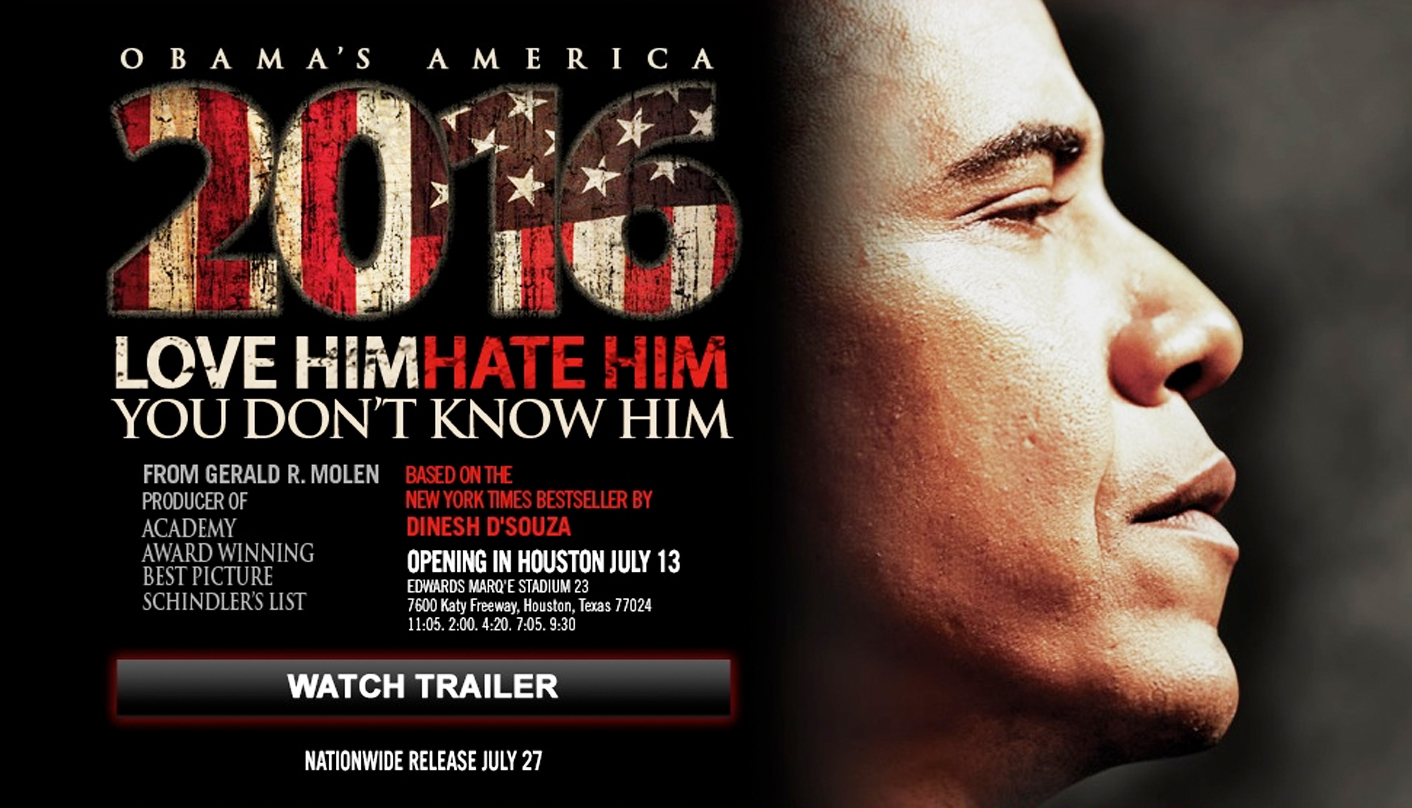 Ever wondered what would happen if Obama wins the election? Ever wondered what the world would look like in 2016 if he does? Well, you’re in good company. Powered by Dinesh D’Souza’s bestselling speculative “journalistic” effort, 2016: Obama’s America, a new documentary is tearing up the US box office. And it has nothing nice to say about POTUS 44. By RICHARD POPLAK.

There is a superb scene in indie film wunderkind Todd Solandz’s dark diptych Storytelling. A preteen named Scooby encounters Toby Oxman, played by the perennially dishevelled Paul Giamatti, in a bathroom. Oxman asks Scooby if they can have a chat.

Scooby is taken aback. “Are you a pervert?” he asks.

“Oh,” exclaims Scooby. “You mean like the Blair Witch Project?”

Which about sums it up. Because it’s election time, the ever-shriller political “discourse” has hit a new high, or low, as the case may be. And even in the era of the Super PAC, where documentary filmmakers are running around the United States of America with Batman-style budgets in order to slag the other guy in hi-def digital, 2016: Obama’s America stands out. This weekend, the film made the US box office Top 10, selling $6.2-million in tickets to bring its total take to just over $9-million. Those are spectacular numbers for a documentary, especially one that is playing on only 1,000 or so screens. Its per-screen total of $5,718 was the highest in the Top 10, slaying the likes of The Dark Knight Rises and Expendables II. The film is on target to gross over $30 million, which is big dough by any standards.

I hear you yawning. But the film’s success could have significant implications on how the American presidential campaign unfolds—and points to another, under-represented fact in these elections: filmmakers, advertisers and television networks stand to make a fortune. “Fortune” is an anaemic adjective in this case. Try: “f*ck ton.” That seems to do the trick.

The Republican Super PACs—organisations not officially affiliated with candidates but nevertheless supporting them—stand to raise almost $1.2-billion dollars over the course of the campaign. Every last penny will be spent in an effort to outgun their Democratic counterparts, who will most likely lag in their fundraising efforts by about $400-million or so. That’s close to 2-billion collective dollars blown on TV commercials, websites and other media yet to be invented. And, of course, a fair portion of that total will go to the likes of Toby Oxman.

You could argue that Hollywood spends 10 times that a year on product of even lesser value, but Hollywood does accidentally, and occasionally, make lasting cultural goods. Titles like Jaws bring in at least $30 million a year for Universal—a back catalogue contains awesome value. There will be no back catalogue after this election. Just lots of money Hoovered up by a system that has been completely co-opted by hyper-wealthy Americans.

Into which stumbles 2016: Obama’s America. The film is based on a typical American partisan screed, titled Obama’s America: The Unmaking of the American Dream, in this case penned by a conservative intellectual named Dinesh D’Souza. D’Souza is one of a breed of commentators who have made names for themselves in a country divided between a red tribe and a blue tribe. Each tribe represents a market of roughly 150-million souls—about three times the size of the South African population—and can therefore afford to lavishly reward its own intellectual sub-economy for telling it what it wants to hear. D’Souza happens to belong to the red tribe, and is thus anti-Obama. Here’s an excerpt from the book’s blurb (yup, even the blurb reads long):

“(Obama) has shown no inclination, and has no desire, to protect America’s position as number one in the world; he would be content to see America as number 18, or number 67, just another country seated at the great dining table of nations. The strength of my thesis is that it is completely congruent with who Obama is and what he does. We don’t have to assume that he is always getting results opposite to what he intends; we simply have to see that he intends the results he is getting.”

I’ll leave you to chew over the construction of that last sentence for an hour or two. But the point is not that D’Souza is wrong (I belong neither to the red tribe nor the blue, so I get to watch this stuff wide-eyed from the sidelines, like most readers of this magazine) it’s that he is part of a multi-billion dollar industry that is having a banner year. And no piece of media represents that better than 2016: Obama’s America. (“Love Him. Hate Him. You Don’t Know Him,” reads the tagline.)

The film, co-directed by D’Souza and John Sullivan, is distributed by Rocky Mountain Pictures, which is responsible for delivering such titles as Hardflip—a vaguely religious film about a skateboarder whose mother is a drunk. The distributor has marketed the film through channels that were established by the massive success of Mel Gibson’s The Passion of the Christ—hard right communities in smaller, red state cities that are receptive to such a POV. And there is no shortage of those in contemporary America.

Rocky Mountain debuted 2016 on one screen in Texas, many thousands of miles from Los Angeles, where Tom Cruise’s films premier. It is an interesting story in an entertainment industry that has for a century known only one way to get bums into seats. 2016: Obama’s America belongs to a shadow entertainment industry that takes a parallel track alongside the mainstream, and yet is not mainstream. Expendables II and other garbage pop are the truly remarkable story in postmodern America: they cross over tribal lines. By all rights, 2016 should be the norm, not the exception.

If there is a precursor in all this, a great granddaddy of the election year political screed, it is, of course, Michael Moore’s Fahrenheit 9/11. That 2004 film, which grossed more than $119-million and galvanised liberal hatred of George W. Bush, was watched by right and left alike, who argued about it on these new things called Internet forums. The film made Moore, already a well-known gadfly, a media superstar and a very rich man. But it also solidified the debasement of the American documentary and contributed mightily to the lowering of the level of discourse in that country.

2016 is more of the same. But here’s the interesting thing about all this stuff: as we’ve written here before, no one is quite sure how money influences political campaigns. The lasting lesson about Fahrenheit is that it utterly failed to damage Bush’s re-election campaign—it merely solidified the battle lines. American elections are won by swaying independent voters, who are by nature less likely to listen to un-nuanced shouting matches. They are courted by specific issues—jobs, the economy, highway infrastructure in their state—and need to be lied to in a very targeted way.

Regardless, no matter how it turns out, the perverts are winning handily. By late November, the richest men and women in America will be documentary filmmakers. DM