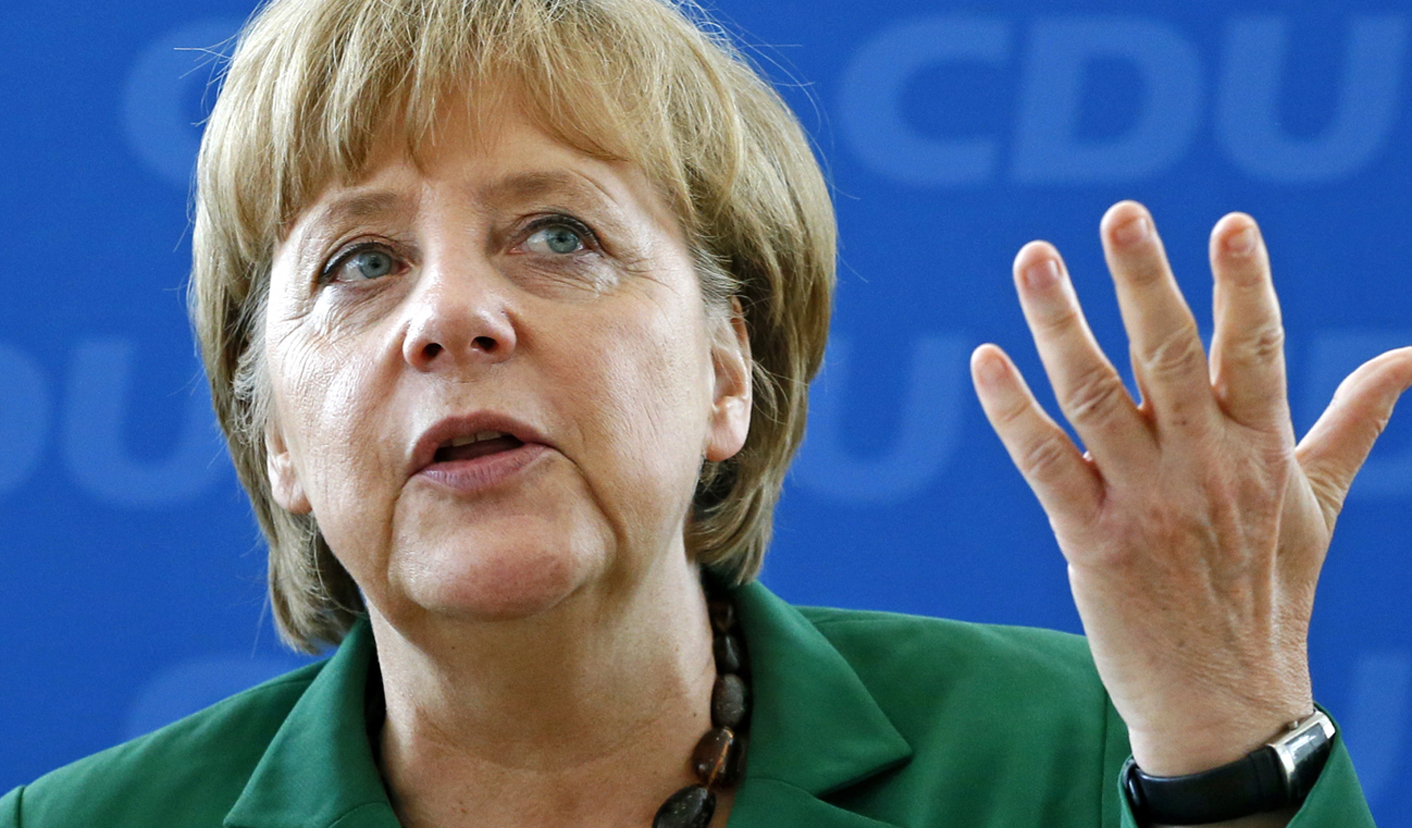 Angela Merkel tried to calm a growing storm over euro zone crisis strategy on Sunday after the Bundesbank likened ECB bond-buying plans to a dangerous drug and a conservative ally of the German leader said Greece should leave the currency bloc by next year. By Noah Barkin and Paul Carrel.

The comments, from central bank chief Jens Weidmann and a senior figure in the Bavarian Christian Social Union (CSU), Alexander Dobrindt, point to mounting unease in Germany with the policies being used to combat the three-year old debt crisis.

Domestic criticism has narrowed Merkel’s room for manoeuvre at a time when Greece is in dire need of more aid and policymakers are scrambling to prevent contagion from enveloping big countries like Spain and Italy.

Two days after Greek Prime Minister Antonis Samaras visited Berlin and made an impassioned plea for politicians there not to talk up the possibility of a Greek euro exit, Merkel herself sent a warning to allies who have said the euro zone would be better off without its weakest link.

“We are in a very decisive phase in combating the euro debt crisis,” Merkel told public broadcaster ARD in an interview. “My plea is that everyone weigh their words very carefully.”

Dobrindt, whose party is preparing for a regional election in Bavaria and the federal vote next autumn, told top-selling German daily Bild he expected Greece to leave the euro zone in 2013. His comments drew a swift rebuke from Foreign Minister Guido Westerwelle who said “bullying” of euro members must stop.

In addition to Greece, policymakers have been sparing over European Central Bank President Mario Draghi’s plans to buy up the bonds of Spain and Italy.

The ECB is assuming a greater role in the crisis while governments negotiate legal and political hurdles to coordinating a longer-term response. The bank’s Italian head is expected to detail his plans after a Sept. 6 meeting of its 23-member governing council.

Merkel gave her tacit support to Draghi on a trip to Canada earlier this month and reiterated in the ARD interview that she believed the ECB’s policies were in line with its mandate to ensure stable prices in the bloc.

But Weidmann, a former economic adviser to Merkel, said in a front-page interview in influential German magazine Der Spiegel that the bond buys could violate rules against the ECB providing outright financing to governments.

“Such a policy is for me close to state financing via the printing press,” Weidmann told Spiegel. “In democracies, it is parliaments and not central banks that should decide on such a comprehensive pooling of risks.”

“We should not underestimate the risk that central bank financing can become addictive like a drug,” Weidmann said.

The Bundesbank retains substantial influence within Germany and on financial markets due to its inflation-fighting credentials but, as just one of 17 constituents at the ECB, it is unlikely it could scupper Draghi’s plan.

Asked in the television interview whether she supported Weidmann, Merkel praised him for speaking out about his doubts and said she saw strong Bundesbank influence within the ECB as positive. But she took care not to voice any support for his criticism of Draghi’s policies.

Central bank sources told Reuters on Friday that the ECB is considering setting yield band targets under the new bond-buying programme to allow it to keep its strategy shielded and avoid speculators trying to cash in.

Weidmann said setting such yield band targets was a “sensitive notion” but rejected suggestions that he was isolated on the ECB Governing Council in having such reservations.

“I hardly believe that I am the only one to get a stomach ache over this,” he said.

Dobrindt was more direct, saying Draghi risked passing into the history books as the “currency forger of Europe”.

With the ‘troika’ of the EU, ECB and International Monetary Fund preparing to return to Greece to assess the plight of the euro zone’s weakest link, Austria’s chancellor said Athens should get more time to repay its debts, provided it sticks to reforms.

“I see quite a good chance that we will arrive at an outcome with Greece that the Greeks stick to their agreements with the EU but in return get more time for the repayment,” Werner Faymann told newspaper Oesterreich.

“The most important thing is that the Greeks stick to the reforms and savings targets agreed with us. If that is guaranteed, I am in favour of a delay in the repayment,” he said, adding that the delay could be two or three years.

But Germany’s finance and economy ministers both reaffirmed their opposition to any easing of the timeframe for Greece, stressing that giving it more time would mean giving it more money. Samaras has said he needs more time but not more cash.

Samaras elicited no promises from Merkel or from French President Francois Hollande, whom the Greek leader met in Paris on Saturday. No final decisions on Greece are expected before the troika delivers its report in October.

Merkel said she had come away from her talks with Samaras convinced that he was serious about the Greek reform drive, but made clear that the pressure on Athens was extremely high. “Every day counts,” she said. DM