Marikana: What price will Zuma pay? 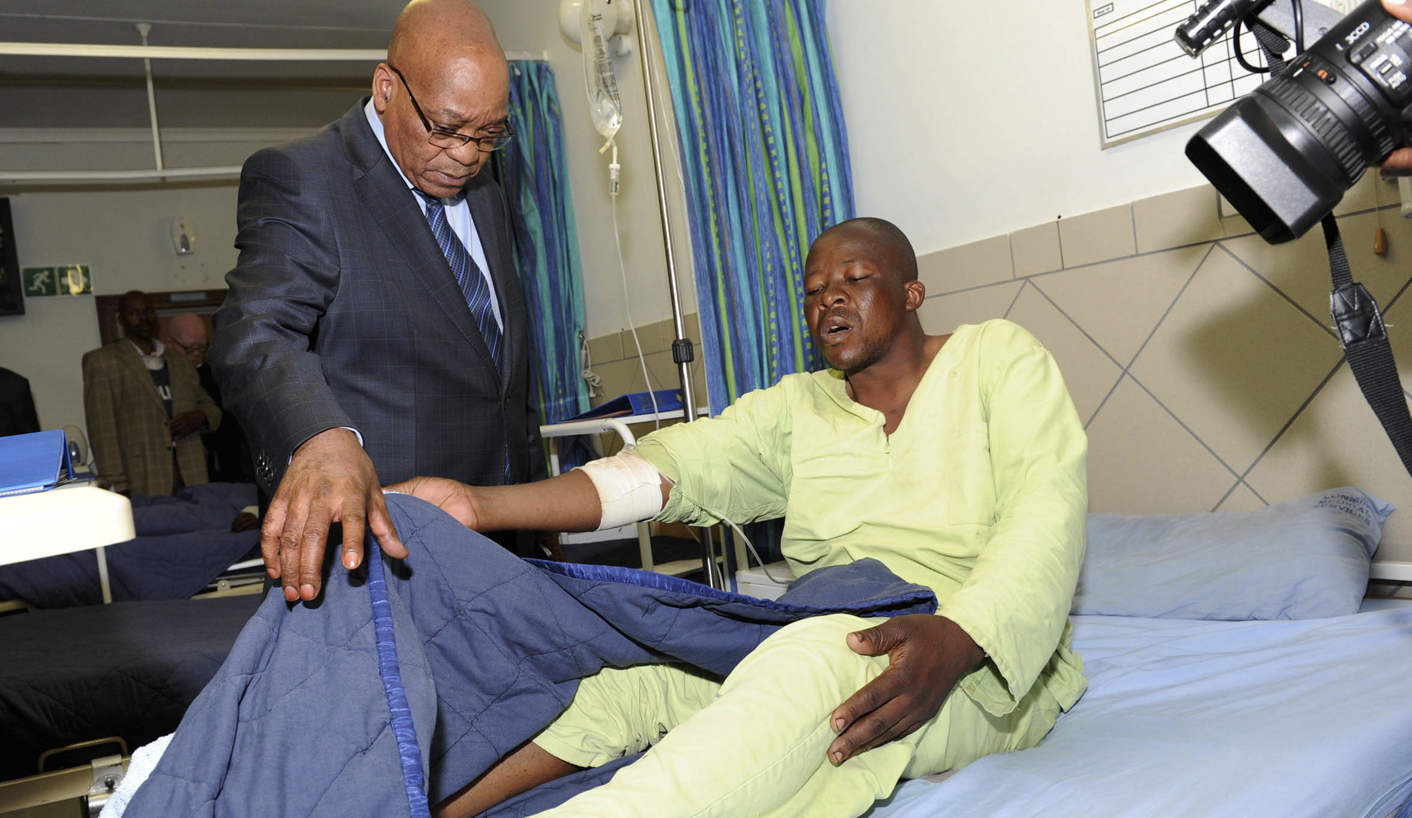 There is no shortage of examples of Jacob Zuma’s leadership weaknesses, from bad appointments in key positions to dawdling over decisions and presiding over policy uncertainty. But it will be a real push, even for his harshest critics, to try to fault him for the Marikana massacre or his actions in the aftermath. Desperate as they may be to ensure Zuma is booted out of the presidency, standing on mineworkers’ corpses won't help their case. By RANJENI MUNUSAMY.

President Jacob Zuma has many reasons why he needs to hang on to the presidency of the ANC at the party’s National Conference in Mangaung in December. Foremost among these is the retention of power and patronage which he, his acolytes and family now enjoy. He would also not want to face the humiliation of being defeated by his deputy in much the same way he ascended to the top at Polokwane five years ago.

But perhaps the greatest fear for Zuma and his camp is the prospect of being “recalled” as state president before his term ends in 2014. With the precedent created in 2008, when the ANC’s National Executive Committee (NEC) decided to abruptly remove Thabo Mbeki from office and have a stand-in serve out his term, the likelihood exists that Zuma’s enemies, if successful in toppling him as ANC president, would agitate for his ouster.

Internal divisions and factional battles are raging in the ANC on unprecedented levels, and are likely to escalate in the next three months, particularly when the nominations process kicks off. Zuma’s leadership is the source of much contention as factions have grouped either for or against him retaining the ANC presidency.

It now appears as if the ANC Youth League has jumped the gun, not even waiting for Mangaung to agitate for Zuma to be recalled. The Sunday Times reported that at an NEC meeting last weekend, the Youth League resolved to demand that Zuma be recalled from office because of this month’s massacre at the Lonmin platinum mine at Marikana, in which 34 mineworkers were shot dead by the police during a violent and protracted wildcat strike.

Expelled Youth League leader Julius Malema has also called for Zuma and Police Minister Nathi Mthethwa to resign over the massacre, as they are ultimately responsible for the actions of the police. In the face of mass outrage over the deaths, Zuma has appointed a Judicial Commission of Inquiry to investigate the role of among others, Lonmin, the police, the two trade unions enmeshed in the dispute and the Department of Mineral Resources.

The Sunday Times reported that an ANC NEC meeting on Monday, scheduled to discuss local government, will now be an opportunity for the senior leaders of the party to interrogate the events at Marikana. The paper said Zuma is likely to face the “wrath” of the ANC “amid fears of a political backlash against the party” as a result of the massacre.

“Zuma’s prospects of retaining the ANC leadership at the party’s conference in Mangaung in December have been dealt a blow by the tragedy,” the Sunday Times said, claiming that since most of the dead miners hailed from the Eastern Cape, Zuma’s support in that province would slip.

The NEC meeting comes after a weekend when Zuma suffered a blow in the heavily disputed OR Tambo region in the Eastern Cape, where his allies were defeated by the “pro-change” lobby. Thandekile Sabisa was re-elected chairman of the second biggest region in the country, defeating the pro-Zuma candidate William Ngozi by 294 votes to 288. The original regional conference, fraught with factional battles and disputes over credentials, was adjourned earlier this month before new leaders could be elected.

The win is a huge psychological victory for those supporting Deputy President Kgalema Motlanthe’s candidacy for the ANC presidency at Mangaung, as the OR Tambo region is highly influential in the Eastern Cape. The new regional executive will also materially benefit Zuma’s opponents, as they will decide on the branch members that make up the delegation to the National Conference. They also now have official standing to lobby for Motlanthe, which is difficult to do outside formal ANC structures.

The ANC in Gauteng, one of the most powerful provinces in the country, appears also to be making its stance clearer in the run up to Mangaung. Speaking at a gala dinner organised by the ANC’s Liliesleaf Farm branch in Midrand on Saturday night, ANC provincial chairman Paul Mashatile said Mangaung was the party’s opportunity “to renew the ANC and to renew leadership”.

“As we go towards Mangaung our responsibility as ANC members is to decide which is the best team. I think that there should be change in Mangaung.  It’s important that we come from Mangaung with a much stronger ANC so that we cannot live from crisis to crisis,” the SABC quoted Mashatile saying.

The developments in the Eastern Cape and Gauteng are likely to have a significant impact on Zuma’s bid to remain ANC president, as it suggests that support for Motlanthe is solidifying even before he formally accepts nomination.

But it remains to be seen whether the Marikana massacre would in fact be the watershed moment of Zuma’s term. It would be difficult for his detractors to use the NEC meeting to haul Zuma over the coals over the massacre as his actions since the incident has been markedly different to his usual dithering over issues.

His quick return to South Africa from Mozambique, his two visits to Marikana—even though he didn’t speak to the miners on the day after the massacre—and his appointment of a broad-ranging inquiry led by retired High Court judge Ian Farlam, which places his own government departments under scrutiny, all showed a genuine concern and commitment to getting to the bottom of what caused the violence.

Even at a stretch, it would be difficult to place the blame the deaths on Zuma himself, although his ministers at Mineral Resources, Labour and Police could definitely be in the firing line. As the crisis built up at the Lonmin mine earlier this month, there was no evidence of government intervening to mediate, particularly after the gruesome killings of police and security personnel.

The conduct of the police on the day of the massacre would be one of the most crucial aspects of the Farlam inquiry. Mthethwa came under heavy fire from the opposition in Parliament last week for failing in his duties and encouraging the militarisation of the police. The Democratic Alliance said in any normal democracy, the police minister would have stepped down for such brutality against citizens.

The police conduct is now under further scrutiny following a City Press report that police tortured survivors of the Marikana massacre who were arrested on the same day. The Independent Police Investigative Directorate has launched an intensive investigation into the alleged police brutality at five police stations. The paper reported that 194 affidavits had been taken from miners on how they were beaten up this week, and that hundreds of cases of assault and attempted murder have been opened against officers.

The reports of continuing police brutality against the mineworkers, coupled with independent research showing police hemmed in the strikers and fired at them when they tried to escape, could suggest a sinister motive behind the massacre. Should the Farlam inquiry find police used excessive force against the mineworkers, Mthethwa could and should be held culpable as the political head of the department.

Mthethwa, Zuma’s de facto campaign manager in his bid for a second term, would be an easy target for those wanting to use the Marikana massacre to unsettle Zuma. It is not yet known whether the Farlam inquiry will be a public process. If it is, Mthethwa could be in for a hell run over the next few months as evidence is led before the commission, inhibiting his ability to lobby for Zuma’s re-election.

The ANC on the whole has been largely absent from Marikana and has deferred the problem to government. The conditions in South Africa’s mines that led to the rebellion of the Lonmin workers has to be traced back to how the ruling party has handled the mining industry since 1994, and so can hardly be pinned on the current president.

Marikana will for years to come represent many things to South Africa., but it is not a way out of the Mangaung conundrum.

Pinning the Marikana massacre on Zuma is therefore no easy task for those in the ANC hoping for a shortcut to Mangaung. His many leadership weaknesses notwithstanding, there are only two ways to decide the ANC presidency: through a vote at the conference or a deal between the factions. DM

Photo: South Africa’s President Jacob Zuma (L) talks to one of the injured miners during a courtesy visit in a hospital outside a South African mine in Rustenburg. REUTERS/Kopano Tlape/Government Communications and Information Systems