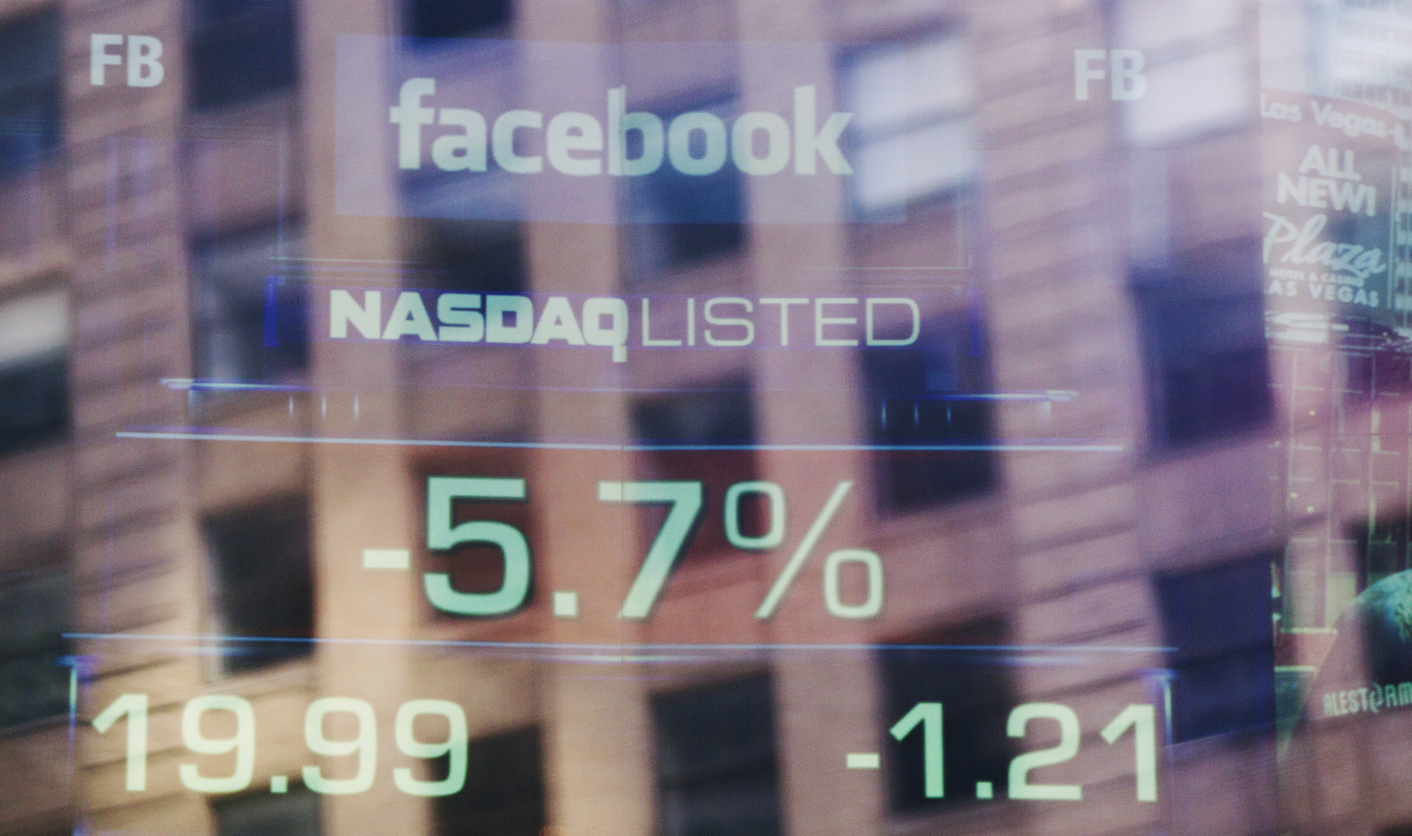 Last week, the share price of the website that counts one in seven human beings alive as a registered user took another hit, proving a couple of things: One, there’s no business model in social media; two, Wall Street is a bitch. By KEVIN BLOOM.

In his letter to investors before the Google IPO in 2004, co-founder Larry Page noted that as a private company his little search engine had always been focused on sustainable growth, adding that it fully intended to retain such focus when it went public. He warned potential investors that if opportunities arose whereby executives needed to forfeit short-term results to secure lasting shareholder value, those opportunities would be taken. “In our opinion,” wrote Page, “outside pressures too often tempt companies to sacrifice long term opportunities to meet quarterly market expectations.”

Sound familiar? Consider the words of Facebook founder Mark Zuckerberg, before that modest company’s IPO in May: “We don’t build services to make money. We make money to build better services… People want to use services from companies that believe in something beyond simply maximising profits.”

On both counts, of course, while the sober pronouncements of the respective Internet gurus may have been a required item in the prospectus, it was perfectly understood by all involved that Wall Street wanted just one thing: yup, “maximised” profits. In the former’s case, these were quick in coming. Google’s first earnings report post-IPO showed strong gains, with sales doubling on the previous year (to just under $806 million) and net income up more than 150% (to $52 million). The share price rose 12% in a single day’s trading as a result.

We all know what happened in the latter’s case. Since its IPO at $38 a share, Facebook has been falling steadily, and is now trading at around $19. The latest decline came last week, after the number of shares available for trading increased by 60% (the shares freed up on Friday represented 14% of the total 1.91-billion that will eventually be released onto the market). According to Bloomberg, Friday’s 6.3% tumble was the second-largest post-lock-up drop among companies that have gone public since January 2011.

Meaning that unlike the Google founders—who, thanks to the opportune timing of an explosion in search-ad revenue, didn’t have to eat their words—Zuckerberg’s sales pitch about the long term makes him look like an ass. A minor reason for this is that Facebook’s first earnings report as a public company, which came out in July, fueled concerns over how quickly it could draw income from mobile devices. And although second-quarter revenue grew 32% on the previous year, it was still down from the 45% growth of the first quarter.

But beyond these results—which aren’t exactly devastating—lies Zuckerberg’s more substantial reputational problem. As stated before on this website, the months leading up to the IPO was when the serious damage was done to his company. Because that was when Morgan Stanley (as chief underwriter), JP Morgan and Goldman Sachs (as co-leads) and Bank of America, Merrill Lynch and Barclays (as assistants on the deal), were doing all they could to talk up Facebook’s valuation—a valuation that peaked at a stupendous, recording-breaking $100-billion.

As ever, hindsight allows us to squash complicated concepts into tiny nutshells, and here the nutshell is as follows: Facebook’s IPO was manipulated by the denizens of Wall Street, those grandmasters at exploiting the growth cycles of over-hyped companies, who saw in the social networking site an opportunity to play their game on a historically momentous scale.

Robert Lenzner of Forbes magazine explained the above in a slightly larger nutshell: “The Facebook IPO is a cynical tale of selling cheap shares privately at peak rates of growth—only to dump the shares on the unsuspecting public when growth suddenly slowed. Imagine; in the face of slower growth Facebook and its financial advisers upped the ante on the stock from $32 a share to $38 a share and stuck another 800 million shares into the offering. They should have lowered the offering price into the low $20s and reduced the amount of shares being sold.”

They didn’t, however, and now Zuckerberg’s words about people wanting to use the services of companies that “believe in something beyond simply maximising profits” read as slightly untrue. Not that “people” are leaving Facebook in droves, mind you. When the whole IPO thing hit the media radar at the beginning of the year, the site’s user base was listed as 800-million; currently, in the midst of the share sell-off, “just under a billion” is the cited statistic of choice.

Still, despite the fact that one in seven human beings on Earth is registered on the site, analysts predict that the share price is going to full even further. The central problem confronting Facebook—a problem it has confronted from inception—is that it is impossible to safeguard the privacy of its users while, at the same time, telling advertisers what they want to hear. Zuckerberg has learned the hard way that the surest route to a drop-off in audience figures is a decision to sell (or even a threat to sell) that audience’s personal information on to marketers.

As is also becoming increasingly obvious, where a search on Google has a fair chance of delivering a corresponding advert that translates into a sale, all the “likes” in the world aren’t going to persuade a person to go out and buy something.

Social media, as a Web-based offering, was always meant to be intimate and informal, something you engaged with at home and after-hours—proof enough of this can be found in the enduring policies of countless offline companies to block Facebook from their servers. Is it even conceivable that a company intent on safeguarding productivity levels would block Google from its servers? Larry Page and Sergey Brin, in their pre-IPO spin about the inconsequence of Wall Street’s expectations, may have been acting just as disingenuously as Zuckerberg, but at least they had a product that was intrinsically commercial.

Which makes the announcement out of Facebook on 15 August—that it’s testing a service allowing advertisers to place more promotional messages in news feeds—seem kind of desperate. Especially when you take note of the caveat: under the service, according to a Facebook spokeswoman, marketers can place ads in users’ main feeds even if those users or their friends have not signaled that they “like” the advertiser.

It’s a move that could easily backfire; and the vicious cycle, initiated by Wall Street’s insane over-valuation, is suddenly being felt in other areas too.

As noted by Wired magazine: “Only now that its stock is coming back down to Earth does Facebook seem to be thinking about how Wall Street’s valuation impacts the company. With many employees’ stock allotments now underwater, morale has to take a beating. And it isn’t just company spirits that are suffering. Because of its drooping share price, Facebook won’t be able to pay off a multi-billion-dollar tax bill on employee equity by issuing more stock in a secondary offering, as it had planned. Meanwhile, the press, rather than focusing attention on the company’s products and features, is fixated on Facebook’s daily performance in the market.”

It isn’t going to console Zuckerberg that these events, given the nature of the Wall Street beast, were almost inevitable. Because his alternative was to keep Facebook private, to either cash in or reinvest his profits—$205-million for the first quarter of 2012, proving that even a lame-duck product can make money when a seventh of the planet uses it—but what would be the point of that? DM