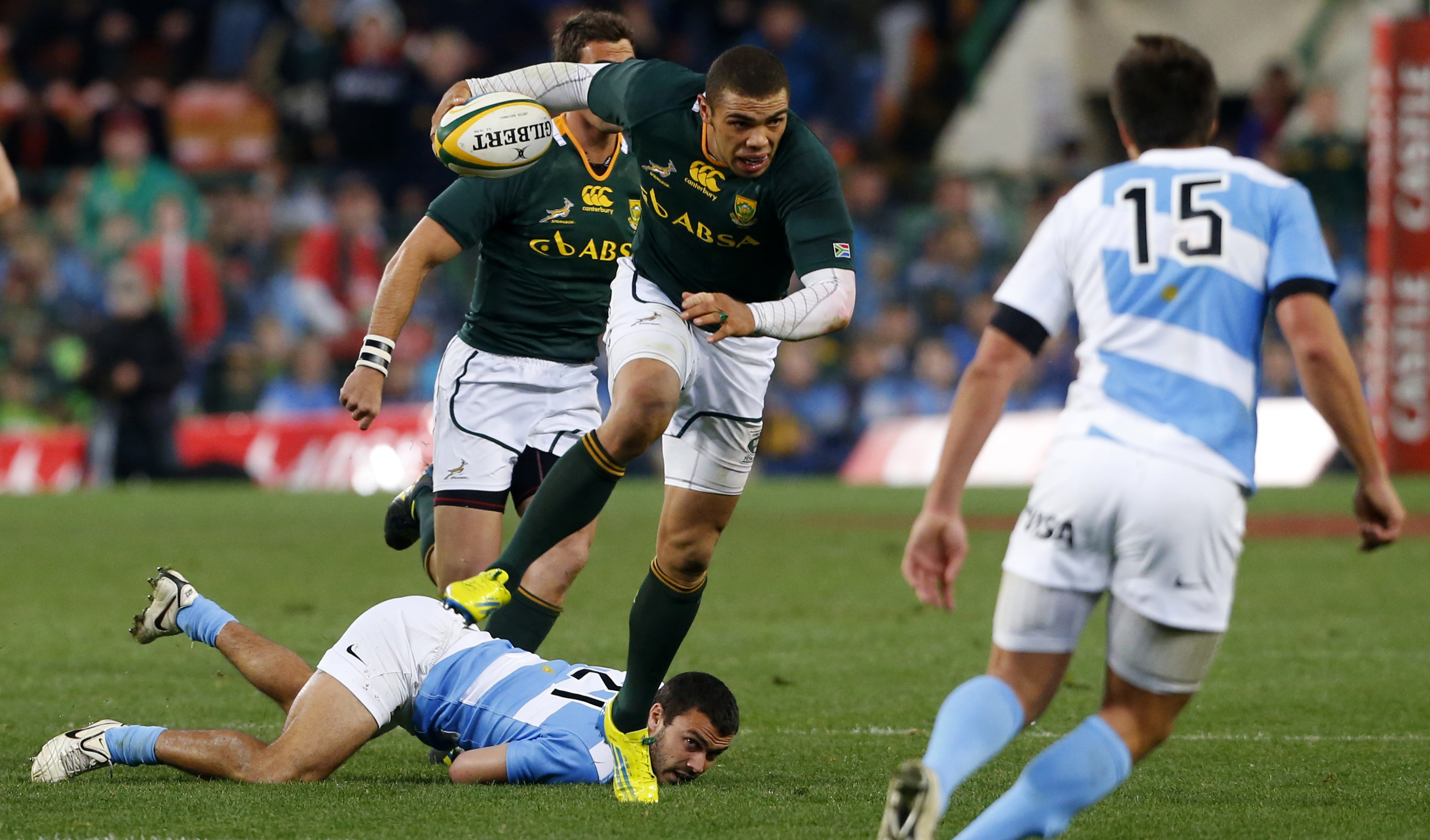 Zane Kirchner, Marcell Coetzee and Bryan Habana grabbed tries as South Africa brushed Argentina aside 27-6 at Newlands on Saturday in their opening match in the inaugural Rugby Championship. By Ken Borland

The Springbok pack did not yield in defence against the massive opposition forwards and their strong ball-carriers won enough momentum to dominate territory and possession.

South Africa coach Heyneke Meyer said the other teams in the southern hemisphere competition, New Zealand and Australia, should not take the South Americans lightly.

“Full credit to them,” Meyer told reporters. “People underestimate Argentina but they play great rugby, they are going to do well in the tournament.

“Those 15 opponents in blue made it impossible for us to get four tries and a bonus point. Argentina belong in this company and they will be tough to beat.”

Two incisive attacks down the flanks by wings Habana and Lwazi Mvovo created an early penalty by Steyn but the home side were rocked when hooker Bismarck du Plessis went off with a knee injury.

He was replaced by Adriaan Strauss who came on to win his 13th cap.

Argentina held on to the ball well in the opening exchanges but could not make any headway against the steely Springbok defence until Hernandez launched a pinpoint up-and-under.

Santiago Fernandez dispossessed fullback Kirchner who then played the ball while lying on the ground, gifting Hernandez a penalty to level the scores at 3-3 after 14 minutes.

Kirchner made amends with a touchdown, pouncing on a pass from Steyn before cutting inside and evading two tackles.

Steyn’s conversion made it 10-3 and Argentina, who fell foul of referee Steve Walsh in the first half due to indiscipline, handed three more points to the prolific flyhalf when they were caught offside at a lineout.

The Pumas continued to concede penalties and South Africa used rolling mauls to good effect before one of them brought a try as Coetzee broke on the blindside to charge over the line.

Steyn booted the touchline conversion to give the Springboks a 20-3 advantage.

Hernandez then kicked his second penalty before halftime to reduce the deficit to 20-6 after Strauss had been caught offside.

Any hopes Argentina had of getting back in the game were dashed when Hernandez and centre Marcelo Bosch missed three penalties between them in the opening six minutes of the second period.

That served to reinvigorate the Springboks as they started pinning the Pumas in their own half.

Habana wrapped up victory when he leapt high to claim a crossfield kick from Steyn and plunged over the line.

Steyn sent the 39,000 crowd home happy by converting from the touchline.

“We didn’t do so well but, being our first game, we are happy with the performance,” said Argentina coach Santiago Phelan. “We need to improve a lot of things but the players gave 100 percent and that is what we wanted.

“It was a good first step, we realised how intense this type of rugby is. We can look at ourselves proudly as we gave everything.”