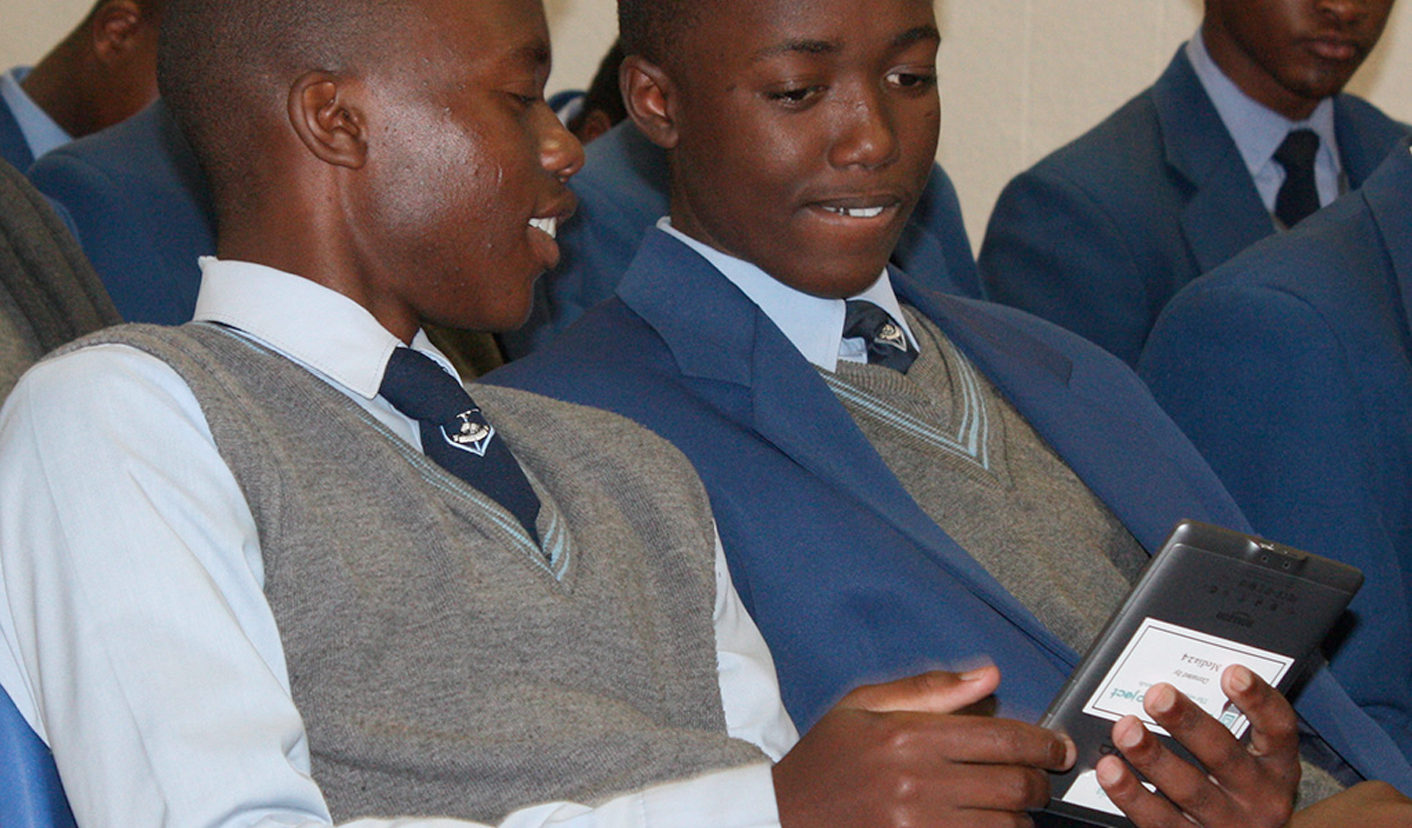 While the public education system tries to procure physical textbooks for itself (with predictable outcomes in terms of budget overruns and under-delivery) an exciting eBook project is being pioneered in a small private school in Benoni. PAUL BERKOWITZ is there, at the back of the assembly hall.

It’s a Thursday afternoon and I have travelled well east of the Cortina Curtain into Benoni. I’m at St Francis College, a private school catering exclusively to pupils from townships on the East Rand.  An assembly is being held to mark the piloting of an exciting new education project, the eLibrary Project.

The project has secured 60 Kindles for this pilot, one for every Grade 11 student at St Francis. Generous private donations plus a discount from Incredible Connection have covered the costs of the Kindles. In addition, Pan Macmillan has donated a very long list of literary classics in the form of eBooks so that each Kindle has literally hundreds of books on it. (For some lighter reading with a local flavour the pupils also have access to the range of The Youngsters books.

On the face of it, the Kindles aren’t cheap. At R1,200 each they are beyond the budget of most families in South Africa. However, when you consider that each device can store up to 1,400 books and most prescribed school texts are copyright-free, the economics becomes more attractive. This before the declining costs of technology and possible economies of scale are taken into account.

In any event, the purpose of the pilot is to assess the impact that eBook readers could have on the way students learn. Students’ current reading age will be used as a benchmark to measure how the introduction of the Kindles affects reading ability and patterns. It is hoped that the success of the pilot will attract wider interest from the NGO and education community and the initiative can then be taken to many more schools.

The assembly itself is a happy occasion. After a brief presentation from the eLibrary Project and a beautiful soiree from the school choir the Grade 11 class is presented with their Kindles. They won’t be able to take them home, but each pupil will have exclusive use of his or her Kindle for a full year on the school property.

After the assembly I introduce myself to the school principal, Mrs Dian Cockcroft. It’s clear she is a woman whose vision and drive has created a very special school. Despite having fewer resources than many of its public sector counterparts, St Francis has achieved a 100% matric pass rate in 13 of the last 15 years. Two pupils have just received bursaries from Mercedes-Benz.

Though its teachers are paid less than teachers in the public sector, the morale and dedication of the staff is very high (the eLibrary Project will be fully supported by both a school librarian and an English teacher). The pupils’ positive demeanour is also obvious, from the performance of the choir (conducted by one of the pupils) to the spirited vote of thanks extended to the eLibrary Project by two of the recipients to the reception I receive when I slip into the back of the hall, late and unannounced.

Mrs Cockcroft shared some of the ingredients that contribute to the school’s recipe of success: There is a strong support structure provided by the school for the pupils and their parents. Every effort is made to educate and include the parents in their children’s academic lives. Many parents cannot or do not want to participate in the process. For them, it’s enough to know that the school is doing a superlative job of acting in loco parentis. The achievements of the pupils whose parents become actively involved in their education are even greater.

The school encourages an ethos of proactivity and self-reliance among the pupils, emphasising that life will not hand them opportunities on a plate. The Mercedes-Benz bursaries are a case in point: Mrs Cockcroft did the initial work to secure times for interviews for the pupils, but these were held over the holidays. The pupils who wanted the opportunities still had to present themselves during holiday time and rehearse their personal sales pitch. It’s a positive kind of paradox that the school places so much responsibility on its pupils while going above and beyond the call of duty to support and nurture them.

A similar process takes place when Grade 12 pupils apply for university places. The pupils are cajoled and nagged to apply ahead of time to as many universities as possible, but Mrs Cockcroft spends many of her evenings checking and editing the applications. There seems to be a natural expectation that most matriculants will apply for further education (the matric exemption rate among the class of 2011 was well over 80%). The school strongly discourages its pupils from taking maths literacy as a subject, encouraging them instead to study mathematics.

When the formalities are over I am invited for tea and cake and to meet the prefects. I chat to the head girl and head boy. She hopes to be a doctor but will start with a BSc if she’s not immediately accepted into the medical faculty. She has already applied to three universities. He has his sights set on actuarial science, or possibly chartered accountancy. He tells me sotto voce that he hasn’t started applying to universities yet, which earns him a good-natured rebuke from Mrs Cockcroft.

I leave the school grounds to head home and I’m cheered by the afternoon I’ve spent with St Francis College and the eLibrary Project. At a time when the news is filled with stories of Limpopo textbook budgets being blown on the world’s most expensive paper boats, I may just have borne witness to the start of something special. This could be the next step in the dissemination of educational material and the love affair with the book. If any team can pull it off, it will be the young philanthropists of the eLibrary Project and the Little School That Could. DM