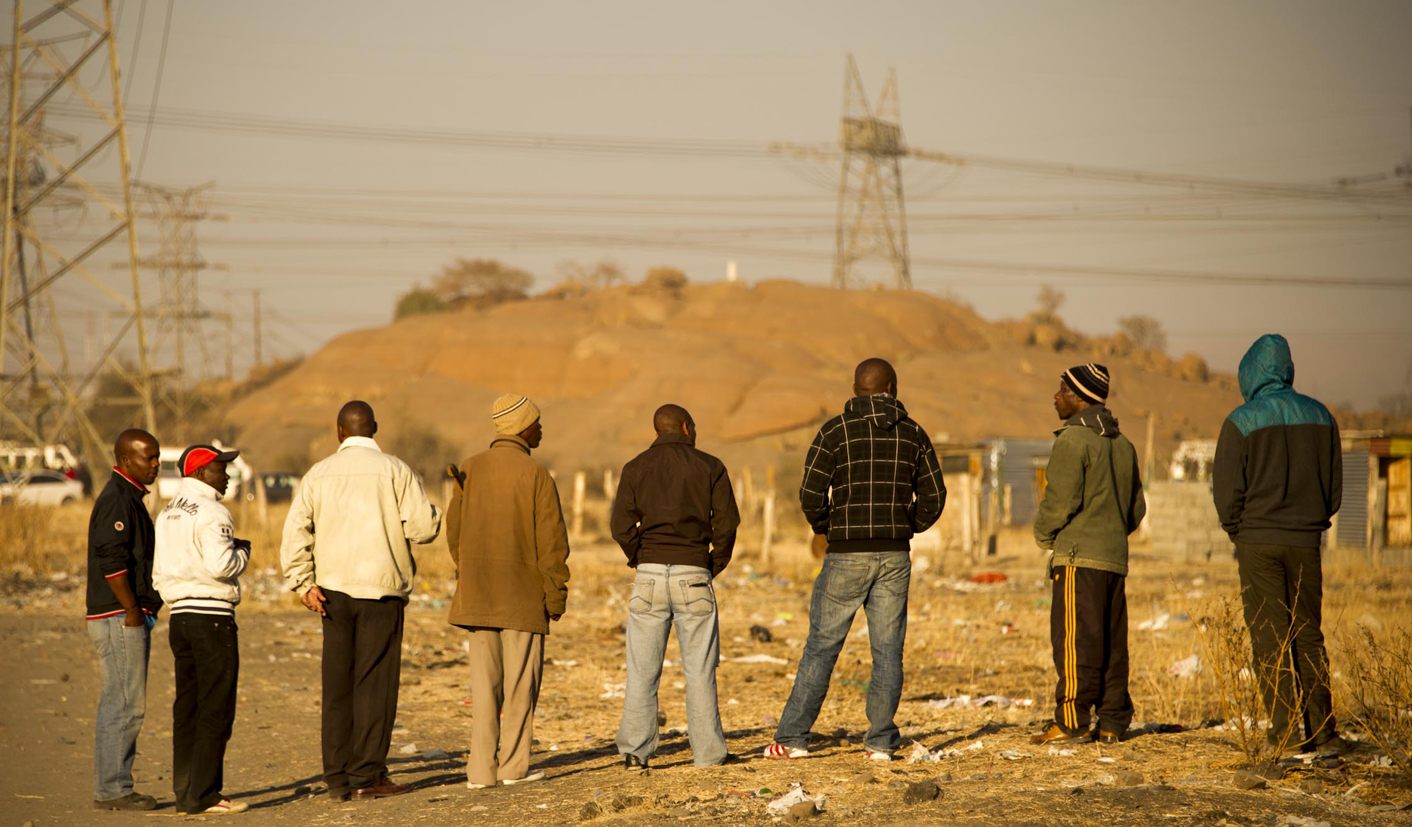 After the massacre that saw 30 people killed in police gunfire, miners gathered at Wonderkop are still reeling, many wondering whether missing loved ones will ever come home. Meanwhile, the struggle for a living wage continues, against the backdrop of continuing union battles. By GREG MARINOVICH.

As police forensics experts gather evidence under spotlights, they run out of formal cones to mark the points at which evidence is gathered. They turn to using their polystyrene coffee cups as markers.

On the other side of Wonderkop shantytown, striking miners gather on a dry, overgrazed field outside to discuss their response to the massacre yesterday that saw more than 30 people killed by police gunfire.

A miner who refuses to be named says, “The police are meant to protect us, but they only kill us.”

Others around him murmur their assent, adding, “They did not even warn us, they just started shooting.”

The miners see the police as siding with management in the violent dispute. “When one of our miners passed a Nyala, there was a homeboy of his from the Eastern Cape inside, and he told him that today was D-day, that they were to come and shoot. He said there was a paper signed allowing them to shoot us.”

No-one is sure who is among the dead, nor who is injured. Many have been arrested. One rock drill operator says that his brother did not return home last night, that he has no idea as to his fate. Another says his uncle has not returned either.

“We are living with fear, we want a solution,” another man says. Photo: The forensics ran out of cones for marking evidence, and used coffee cups. (Greg Marinovich)

Yet yesterday the mood was very different. A photographer who witnessed the massacre says he saw the leading group of strikers “charging the police with their pangas and spears raised; they wanted to kill and murder.”

The police said over the loudspeaker that they wanted the strikers to lay down their weapons, and began to cordon off the hill. A large group of the strikers then tried to escape the cordon. The police used stun grenades and teargas. What happened then is unclear; perhaps the group who had the pistols wanted to ensure they escape being searched, disarmed and arrested.

Another journalist who witnessed the scene said, “It was bad, bad. I am not sure if they were attacking the police or just trying to escape. But it was hectic.

“If they had wanted to escape the police, they could have run in the opposite direction, like others did. This group ran at the police.”

In the aftermath, he saw the police collect what he estimates as eight pistols from among the dead and wounded. The photographer identified two of the driller leaders who had represented the workers in their talks as having been in the charging group and were now dead. (These two are the man in the green and gold tracksuit top, and the man in the green blanket). Photo: Residents look towards the scene of the massacre at Wonderkop that saw over thirty striking miners killed by police in a bloody conclusion. 17 August, 2012. (Greg Marinovich).

The images are shocking, and the footage so appalling to the whole nation – and the question is why it had to end so brutally, if indeed it has ended.

The rocky hill of Wonderkop had become the focus of the battle for a living wage, and perhaps it was inevitable that it would come to this. One of the miners gathered in the early morning light said, “People are shot; people are dying because of money.

“You risk your life underground for too little; just R4,000. Every time we go underground, we are not sure we will come back.”

The miners articulate that either Lonmin or the government must come and sort it out. They seem to cling to a belief that the government does not know how little they earn, or how difficult the work is.

The miners dismiss claims of inter union rivalry as the cause of the problems. There are few, if any, miners who belong to the new union, AMCU. Most if not all are NUM, or not union members at all. “Most of us here are still paying NUM dues,” said one man. They say that AMCU is only represented at the neighbouring Karee mine, also a Lonmin asset. Here workers left NUM en masse after a failed strike where they say NUM failed to represent their interests at all. Many of the strikers were suspended and others fired.  “After the Karee strike, things changed. It was a failure and many left NUM.”

At Marikana, the strikers, led by the drillers, said that they were forced to strike as Lonmin management repeatedly failed to arrive at meetings they had promised to attend. NUM did nothing for them, they claim. So they decided to come to the mountain, Wonderkop, as “it is not mine property and the police would not kill us here.”

Yet the bloody strike, with two security guards and two policemen killed by miners, as well as some six miners killed, paved the road to the hell of Thursday afternoon.

One of the shocked miners spelt it out. “Nobody expected to lose their lives here; this is too much. If management would agree to increase our wages, we would go back to work tomorrow.” DM

Main photo: Residents watch police work at the scene of the massacre at Wonderkop that saw over thirty striking miners killed by police in a bloody conclusion. 17 August, 2012. (Greg Marinovich)