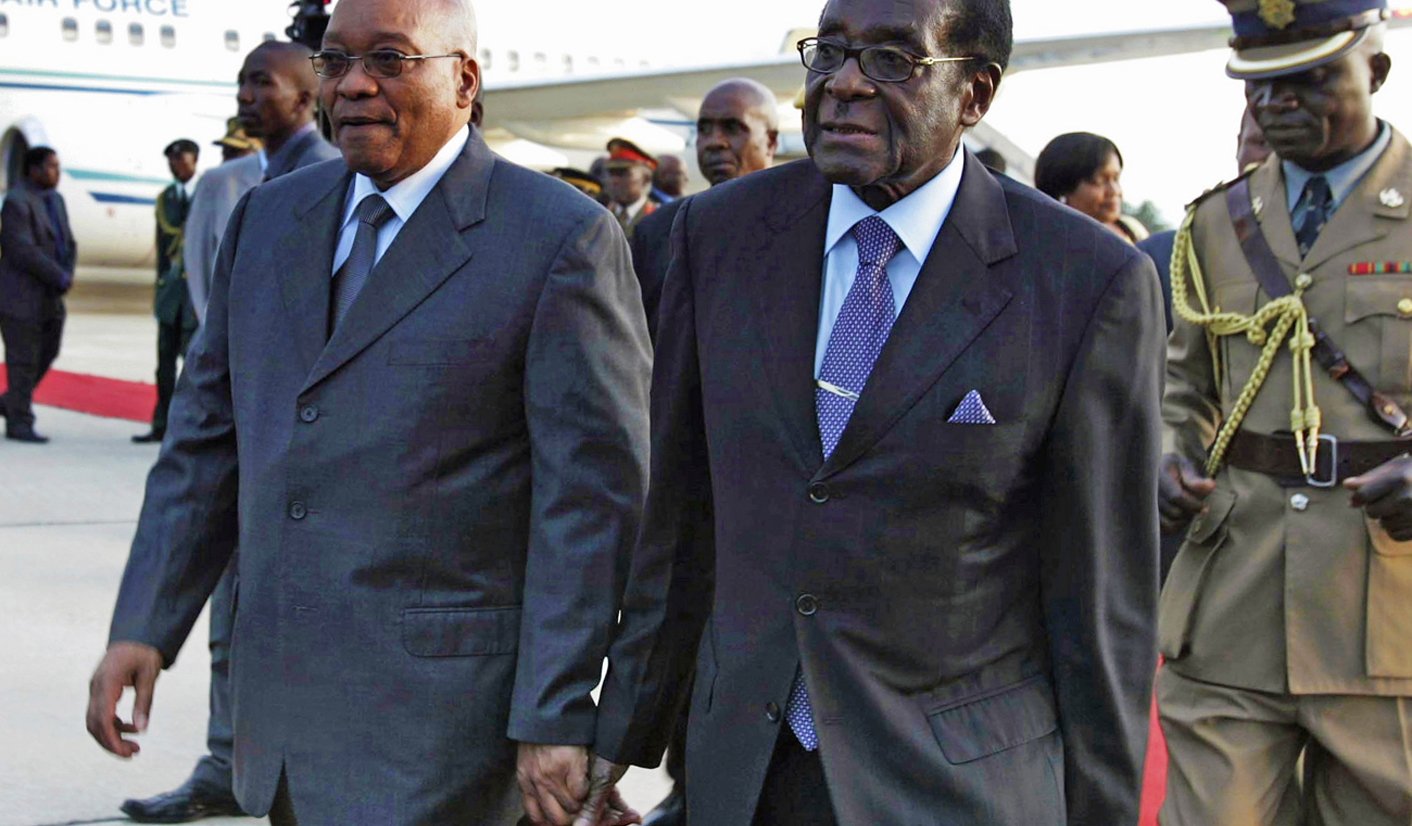 Poor Jacob Zuma. On Wednesday he had to do two of his least favourite things: mediate that intractable Zimbabwean political situation and be nice to Comrade Bob. The bad news is that it’s crunch time in Zimbabwe’s delicate transition, and he’s probably going to have to make a lot more trips to Harare in the near future. By SIMON ALLISON.

President Zuma has not been an enthusiastic mediator in Zimbabwe. Unlike his predecessor, Thabo Mbeki, who thrived in the delicate cut and thrust of diplomatic negotiation, Zuma prefers to concentrate his Machiavellian streak on domestic politics. Given Mbeki’s fate, this seems prudent.

Not helping Zuma’s motivation is his rocky relationship with Zimbabwe’s main protagonist. The president and Comrade Bob don’t like each other much on a personal level, and both have reasons to be suspicious of the other’s intentions. Mugabe got along very well with Mbeki, Zuma’s great political rival, and more recently took Julius Malema, the young pretender to Zuma’s throne, under his wing. Zuma’s daughter, meanwhile, is married to the son of one of Mugabe’s most prominent opponents, Welshman Ncube, leader of the MDC-M.

Every now and then, however, the president does have to do his duty, no matter how reluctantly. At the last SADC summit in June he was gently chided for his hands-off approach on Zimbabwe, where he is supposed to be leading the implementation of the Global Political Agreement, and reminded that he needed to give the issue some personal attention. With the next regional meeting scheduled for this weekend, Zuma had little choice but to make the quick trip to Harare and check up on progress himself.

It was a good time for a visit. The multi-party committee tasked with writing a new constitution has done its job and the draft document is ready to be put first to a stakeholders conference and then to a national referendum. Nearly ready, anyway. This is Zimbabwe, after all, and Zanu-PF rarely plays by the rules. The party isn’t prepared to endorse the constitution until it makes a few modifications.

Zanu-PF is being coy about what exactly these modifications entail. Speculation suggests that some of the clauses that curtail the president’s unfettered power are being revised. Whatever they are, they’re occupying a substantial amount of the party top brass’s time. The Zimbabwe Independent reported the Zanu-PF politburo spent 42 hours this week arguing over the new constitution, including an epic 15-hour meeting attended by Mugabe that began Wednesday and finished at 4.30 Thursday morning, just hours before Zuma was due to arrive.

“We had a good meeting. It was very robust and we have now incorporated people’s views that were not captured that should be reflected in the draft,” said Zanu-PF Spokesperson Rugare Gumbo. “We looked from the preamble through founding principles to the end. We are happy now. We have more or less finished our draft; it only needs to be cleaned…I am sure everyone will be happy with it.”

Other parties involved are less sure. The two branches of the MDC—the main opposition led by Morgan Tsvangirai and Welshman Ncube’s smaller MDC-M—are frustrated that the draft text is up for discussion at all and told South African officials that they are not interested in re-opening negotiations on key elements of the text, which was agreed by a multi-party parliamentary committee.

Even Zuma doesn’t know what Zanu-PF wants to change. Discussions with Mugabe yielded little, with Mugabe telling Zuma that he wouldn’t reveal possible amendments until they had been finalised by the Politburo in a meeting Thursday.

This explains Zuma’s necessarily ambiguous statement after his meetings with Mugabe, Ncube and Tsvangirai. “I think from what I have gathered, there has been some movement forward, although there are some hitches here and there, but they are not as major as they used to be,” he said, without elaborating further.

South Africa is very concerned, however, about the likely ramifications if Zanu-PF proposes drastic amendments to the draft constitution. But it needs to remain diplomatic. “We cannot name it a big stumbling block yet,” presidential adviser Lindiwe Zulu told the Daily Maverick. “Not until we hear what Zanu-PF is worried about.”

The other major political issue in Zimbabwe right now is just as important as the constitution, and just as fraught. This is the population census, which will help determine electoral boundaries and who is eligible to vote in future referendums and elections. The potential for gerrymandering is huge, and Zanu-PF has already been up to its old tricks.

Reports the Zimbabwe Independent: “The census—which has now become a theatre of political battles—was expected to have started on Tuesday but (acting finance minister Gordon) Moyo suspended the process on Monday evening due to the involvement of 10,000 members of the security forces among the 30,000 enumerators who are, traditionally, mostly school teachers. This triggered scenes of fury and chaos at census centres across the country as soldiers tried to force their way into the process by disrupting the exercise. Failing to get their way, security forces resorted to locking up census stations, prompting an intervention by cabinet.”

A cabinet directive, issued by Mugabe’s office, instructed the security forces to leave the census process alone. With the census now set to begin on Friday, it is unclear whether this directive is anything more than window dressing.

The only thing that is clear is that, as chief mediator, Jacob Zuma has plenty of work to do. It is crunch time in Zimbabwe for the implementation of the Global Political Agreement and all parties need to be watched closely to make sure they don’t deviate from the road map. Mugabe and Zanu-PF need to be watched closest of all. Unfortunately for Zuma, he needs to be making a few more trips to Harare in the near future. DM