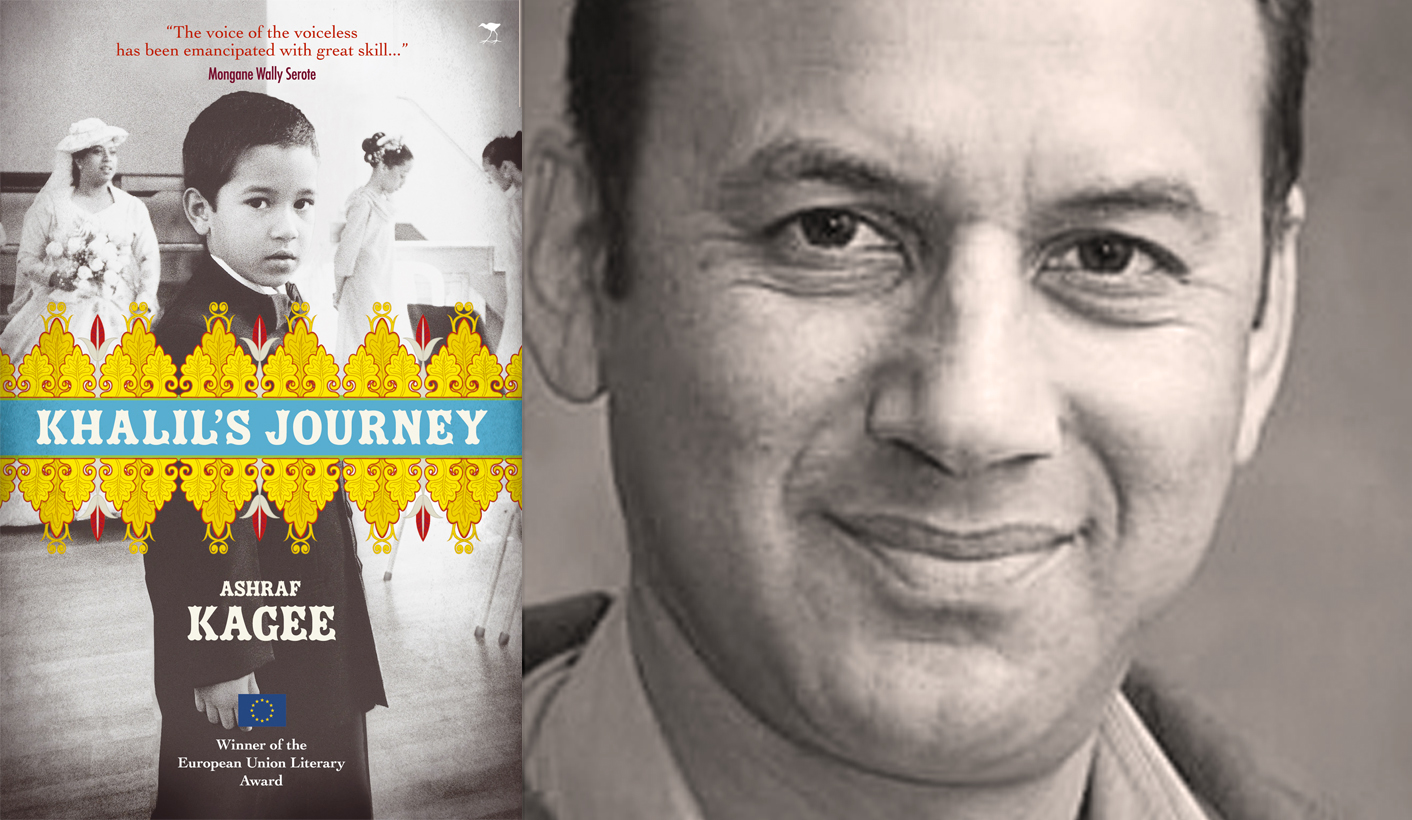 WAMUWI MBAO casts a beady eye over an ambitious debut novel which errs honourably as it narrates South African lives at the turn of the 20th century and beyond.

A recent recipient of the EU Literary Awards, the book staggers under the weight of many metatextual menhirs: here there is a shout from Business Day, there a weighty proclamation from Mongane Wally Serote that “the voice of the voiceless has been emancipated with great skill”.

One doesn’t like to approach a book and find that half one’s reading has been pre-empted, especially when the pre-empting is done in this intolerably vague manner. But as everyone knows, you can’t sell a book in South Africa without the help of noisy trussing from the publisher’s bag of favours.

It’s a pity that, in an age where we’ve witnessed a certain liberation from metaphor, we’re still being called back to read certain works as mast-bearers for the thematics we’ve decided are important to us. Works like Khalil’s Journey are read more as mirrors than as lamps, prized more for the way they capture an existing world than how they create a new one.

Our yearning to fix the inchoate, to locate the somewhereness of culture in this country reveals itself at moments like these, where what we elevate is the accessibility of the work, above all else. The vocabulary for speaking about this book has already been supplied, and the work slips readily into the praise lavished upon it.

Khalil’s Journey is a work whose very title encodes its narrational and conceptual arcs. We’re dropped into a windy Cape Town (because, so the logic seems, it would not be recognisable without a knowing soliloquy on the Cape Doctor) in the 1980s where the eponymous protagonist lies, aged and dying and being quite garrulous about it, in the non-whites section of Groote Schuur as it existed then. Khalil finds himself in the grip of a story that possesses him overpoweringly:

“He felt a compulsion to remember as much as he could, to make a good yarn of the story trying to burst out. Self-consciously, Khalil tried to contain it, to bottle it up, to close the lid on it, but it kept bubbling up, trying valiantly to get itself told.”

This tale, we are told, is no epic. “Cape Town was no place for an epic”, the narrative asserts confidently before wanly checking this assertion with a self-questioning interpolation. A sort of formless conversation is being conducted, with Khalil lying in bed like a character out of Beckett, unable to die and so compelled to narrate his process of living.

And since he is the author of this tale he is free to invent it, of course. This he does, in eventful prose that fills the pages to the point of congestion. The narration hovers slightly above him in a convivial sort of way, dipping into his thoughts and then disporting once more in an airy manner. In the first few pages, point of view—who is thinking what we are reading, and why? —is not fluidly resolved, so that it trips us up just when we are trying to attend to the story.

The work’s voice grows clearer and cleaner in the next section, shaking off the clumsiness of the preamble with a stirringly realised passage that artfully draws out the links between the before-time prior to Khalil’s birth and what will come later.

Kagee writes with a compound eye, allowing him to visualise many characters at once, so that the work runs freely between the characters and their thoughts. The author barely missteps in what is a fluent and volubly readable work that adds to the ever-burgeoning pantheon of literature which explores the seam of oceanic migration to South Africa.

The writing is clever, witty, with a dry tone that strikes the right key between the casual humour of the everyday and the attentiveness to the more serious moments that occur. There are glints of early Rushdie in the first few sections of Khalil’s Journey, though it deliberately lacks the epic register of, say, Midnight’s Children.

Indeed, one of the greatest achievements of this work is that it is a historical novel without being a historical novel. Kagee’s writing exhibits what T.S. Eliot defined as “relevant intensity”, the details are perfectly honed and finely pitched so that they refer without an over-abundance of detail. The novel manages this style with a commendable degree of élan, which only makes the points where it loses step more troubling.

Where it stumbles, and this is really my only quibble with this novel, is that its author seems to take the idea of novelistic evidence too seriously. When JM Coetzee spoke witheringly of the sort of novel whose conclusions are checkable by history “as a child’s schoolwork is checkable by a schoolmistress”, he had this phenomenon in mind.

Most of the novel’s invocations of the historical occur at a gestural level, meant to keep them at the periphery of the interpersonal. It is glibly kitsch at best. Too bloating, like blocks cut from a textbook, compared to the material around it. The connection is sometimes too didactic: the novel seems implicitly aware that human relations are too fluid to be enamelled in this way, but it does so nevertheless (and what is that ignoble word “game” doing there?).

This didacticism results from Kagee using the 20th century as the trellis on which his story hangs. Khalil lives a long life, and it is a life that is signposted by the familiar stations of history it passes through: the death of his mother from tuberculosis, the trials of establishing himself in the working world, the signing of the treaty that ends the Boer War, the formation of the Republic, the sinking of the Titanic, the Depression, the rise of resistance to colonialism and so on.

Khalil is a passive witness to these incidents, but they are introduced far too coarsely to signify outside of their brute facticity. A character will be asked about the ICU, and his reply will be bookended with the quite unnecessary information that he is “referring to the largest trade union on the continent that mobilised the African poor around the Union”. Barbarous asides like these weaken the novel, because one begins to sense that Kagee is writing the inner life of a culture and not the inner life of the characters within that culture.

The novel seems pinned in a constant battle with facticity, as though the author is conflicted by a desire to ignore history butting against a need for his setting to be recognisable. It’s as though Kagee can’t decide how much to ironise and when to do it, as if to ignore the historical would be to commit impiety. It undermines the project of representing the ordinary a little when the author doesn’t seem to trust his characters to narrate their own experiences.

The author’s defence might be that he was attempting a form of free indirect style, but the anxiety is always present. A passage will begin in omniscient mode, progress into what appears to be the character’s stream of consciousness, and then be upended by a voice that seems to hover somewhere behind the protagonist, always too cleverly knowing to sustain one’s immersion in the story. In a novel devoted to the ordinary, one wants to feel that the characters are souls rather than fictive creations.

If it seems like I’m making heavy weather of this, then bear with me. The ordinary was always a retreat from the anxiety-laden largesse of society. One life, spread out before us with its furniture and its mechanisms in close detail, is more easily viewable than a collage of disorienting difference. But capturing the sublimity of the ordinary, which, after all, is the point of the whole exercise, is something that requires a fine attention at sentence-level, a concentration in the process of rendering that peels back the calcified to reveal the bright and the new that lies underneath.

In this respect, there are many fine passages throughout this work, none more so than when the writing clears itself of historical chunter and focuses on the lived experience. Kagee shows himself to be deeply interested in human lives at a personal level and skilled at close rendering in a way that invites comparisons with Richard Rive, although he lacks Rive’s sentimentality (and is all the better for that). DM