Ghana buries one president, prepares to elect another 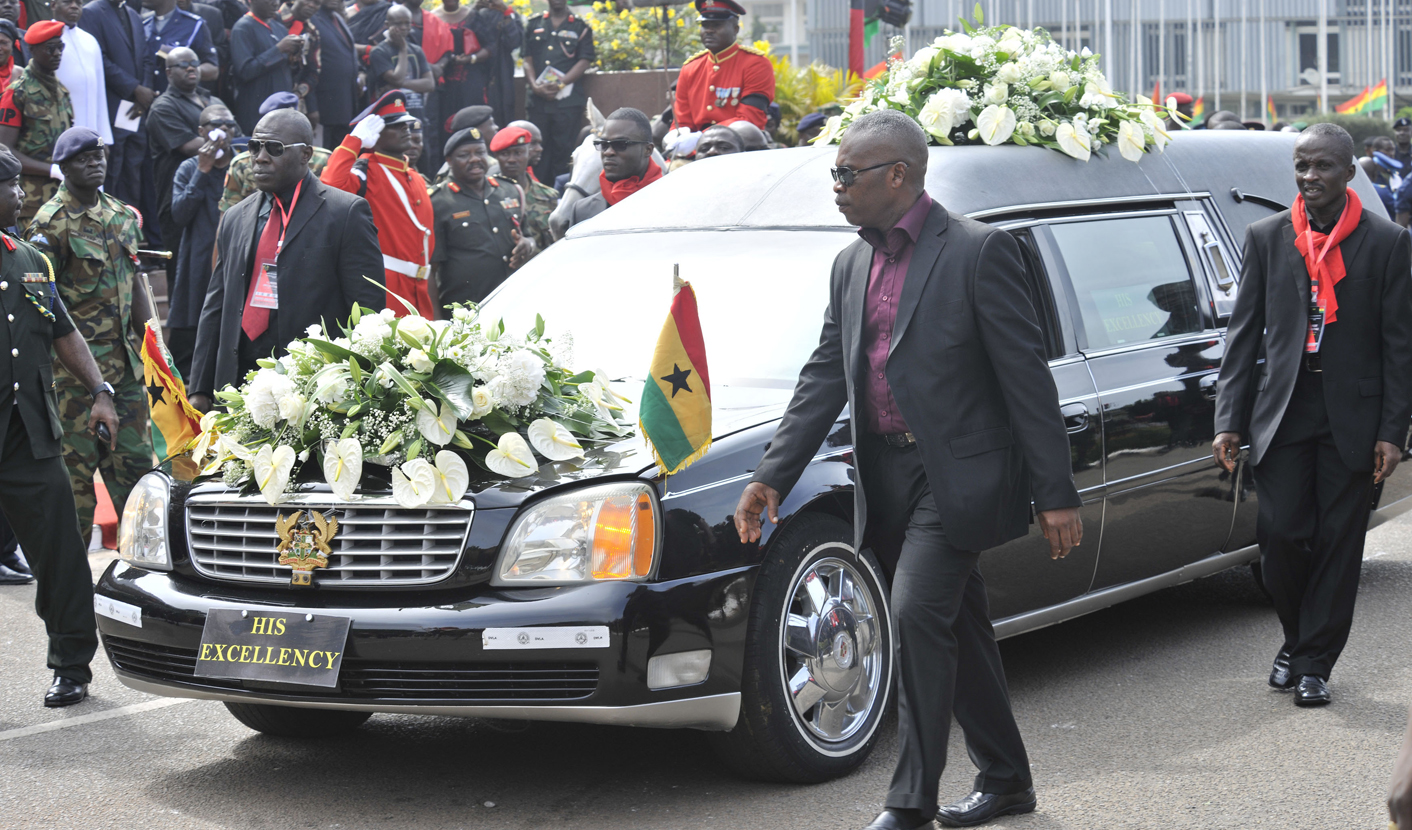 Ghana’s new president laid the old one to rest in a star-studded ceremony in Accra Friday. Now, he gets down to business. But don’t expect too much governing to happen. With elections in December, President John Mahama and his main rival have more pressing concerns. By SIMON ALLISON.

Accra’s Independence Square is a massive expanse of flat concrete on the edge of the Atlantic Ocean. Bracketed by the Black Star Gate at one end, an African Arc de Triomphe, crowned with Ghana’s famous Black Star, and a presidential viewing platform at the other, the square is usually deserted save for a handful of bored guards preventing tourists from taking too many pictures.

The square is not designed for everyday use, of course; it’s for big political set pieces like military parades, inaugurations and funerals. On Friday, Independence Square hosted elements of all three.

The main event was the funeral of John Atta Mills, the president who died in office two weeks ago from throat cancer. It’s not what it sounds like. Mills was no president-for-life, having won his post in much-lauded elections in 2008, unseating the party of incumbent John Kufuor in the process. Mills was getting ready for another crack at the presidency in the elections later this year, campaigning on his reputation as a unifier and a peacemaker and the economic progress Ghana made under his tenure. Its progress has seen Ghana join the ranks of lower-middle-income countries, one of only a handful of African countries to do so. It was progress helped immensely by Ghana’s entry onto the list of oil-producing nations, though his political rivals argued Mills hadn’t done nearly enough to ensure that the new oil wealth had improved the general standard of living.

But never speak ill of the dead, the cliché goes, and even Mills’ opponents are being nice now that he’s six feet under, buried in a hastily-built crypt near Osu Castle, the seat of power. Tens of thousands of mourners lined the streets to pay their respects to his coffin, draped in the Ghanaian flag and accorded full military honours. He was commander in chief, after all. More packed into Independence Square for the funeral itself, where the common people were joined by an all-star line-up of African leaders, including Goodluck Jonathan of Nigeria, Thomas Yayi Boni of Benin (also African Union chair), and Alassane Ouattara of Cote D’Ivoire (also Ecowas chair). Hillary Clinton made an appearance, the funeral fitting nicely at the end of her planned African trip, and South Africa was represented by Deputy President Kgalema Motlanthe.

“A sea of Ghanaians, in mourning clothes, thronged the Independence Square to pay their last respects,” wrote state-owned newspaper the Daily Graphic. “The beauty of the solemn ceremony was the display of national unity with the majority of the people waving miniature national flags, especially when the military cortege arrived at the service grounds.”

National unity was the theme of the service’s keynote speech, delivered by the third consecutive John to serve as president of Ghana. Mahama was Mills’ vice-president and his constitutional right to succeed Mills was never threatened, an indication of how much progress Ghana has made as a democratic country.

“Let us honour our beloved late president with a sense of unity and purpose, resilience, determination and resolve to build a prosperous nation,” the new president said in his speech. “President Mills was a man of God who abhorred political antagonism and we shall do him a lot of good if we avoid divisive tendencies in our political activities.”

Mills’ funeral was effectively Mahama’s inauguration too, marking the first official appearance by the new head of state. However, Mahama has only a few short months in office before the next elections, scheduled for 7 December with a run-off, if needed, on 28 December. He will have a chance to extend his tenure—the ruling National Democratic Congress wasted no time in confirming Mahama as its new candidate in the elections. This was not a foregone conclusion. The NDC has in recent months been riven by internal conflict, sparked mainly by former First Lady Nana Rawlings, wife of Ghana’s military dictator-turned-democrat Jerry Rawlings, who presided over the country’s transition to democracy. Nana Rawlings wanted the party’s nomination for herself. Although not in office, the Rawlings retain a great deal of influence.

“An early priority for Mahama will be to heal the rift with the Rawlingses,” wrote Africa Confidential. “That will be difficult. Rawlings and his wife directed their vitriol against President Mills, criticising him for being too weak and too slow (they were fully aware of his advanced throat cancer) but also targeted Mahama.… Now with all the top positions in the NDC and government filled, there’s little that Mahama can offer the Rawlingses in terms of patronage.”

Waiting to capitalise on the NDC divisions is Nana Akufo-Addo, head of the New Patriotic Party. Akufo-Addo lost narrowly to Mills in the 2008 elections, and has been working ever since on his next campaign. Akufo-Addo and his strategists will have to recalibrate their approach somewhat now that Mills is gone, but given Mahama’s proximity to Mills much of the planned attacks still hold true, particularly the criticism of the NDC’s economic record.

Don’t expect much government business to happen between now and December. Mills’ death means the election campaign has started early, and the next few months are all about whether Mahama or Akufo-Addo will be the star of the next big occasion to grace Accra’s Independence Square: the presidential inauguration. DM

Photo: A hearse carries the body of late President John Atta Mills to the parliament in Accra August 8, 2012. REUTERS/Yaw Bibini