Getting our Irish up: Interview with Mary Robinson 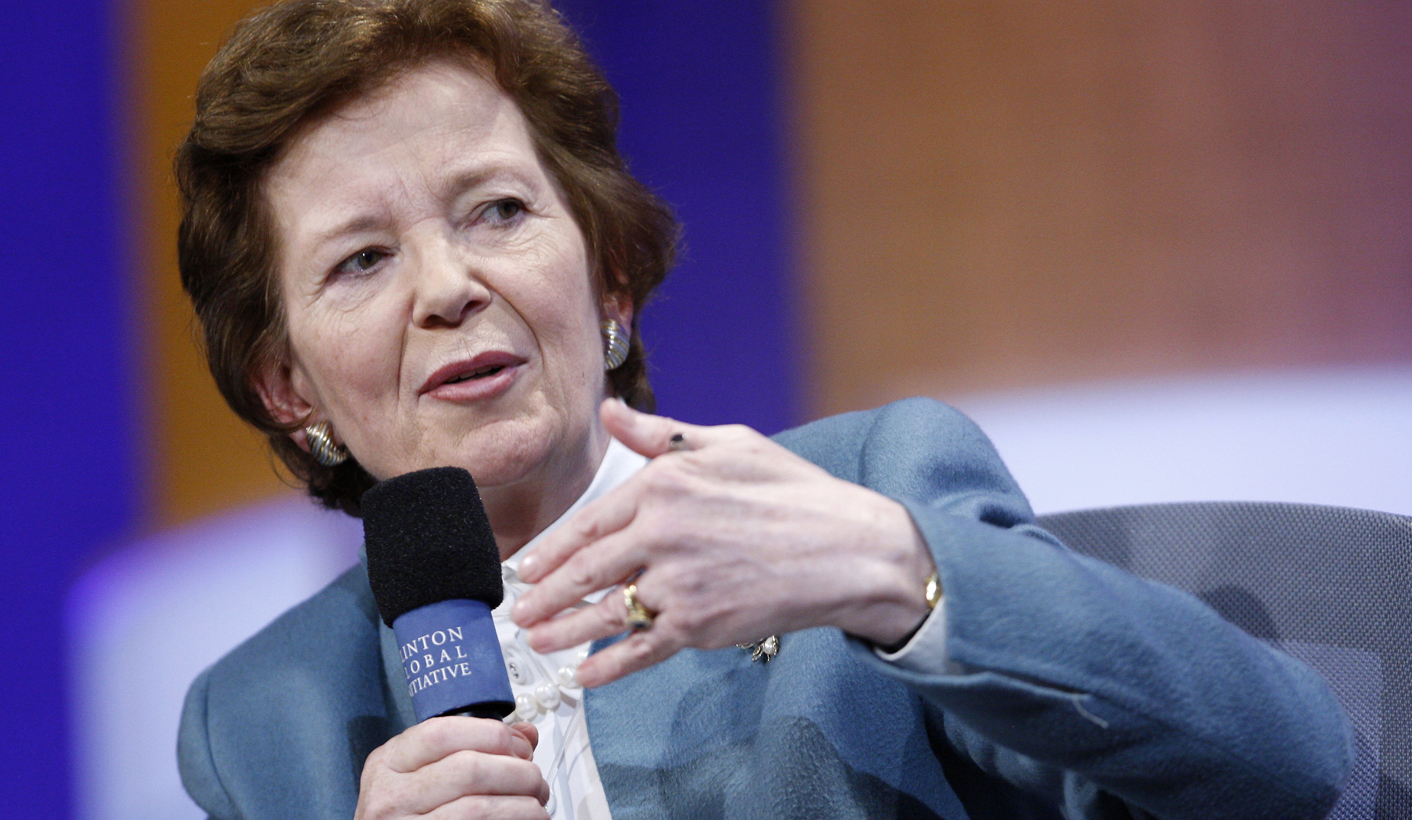 When she delivered the annual Nelson Mandela lecture last weekend, former Irish President Mary Robinson impressed many South Africans with the accuracy with which she commented on the state of South Africa today. KHADIJA PATEL caught up with her in Johannesburg to find out more.

South Africans celebrated national Women’s Day on Thursday. But to an increasing number of citizens, it really is just another one of our numerous public holidays – a day off to be thankful for, with nothing more than a passing acknowledgement of whatever moment in history brought us the privilege. As such, we may be in danger of losing track of what it is that actually brought us to the nation that we are today. When former Irish President Mary Robinson delivered the Nelson Mandela lecture last weekend, she astounded South Africans with her uncanny knack to accurately pinpoint what is ailing the country without betraying the disarming gentleness she is known for.

On Wednesday, when Robinson joined Jay Naidoo and Cosatu stalwart Emma Mashinini at the Gordon Institute of Business Science (GIBS), she was told by Mashinini, “You said in your lecture that it’s not your place to comment about corruption here, but I’m telling you that it is.” Mashinini sought to tell Robinson that it was her place as an Elder, as an avowed friend of South Africa, to say what was on her mind. Robinson certainly has no shortage of opinions on South Africa. And significantly, she is not just any outsider with an opinion on where South Africa’s gone wrong, and more than that, she is not just the former President of Ireland.

As well as being the first woman President of Ireland (1990–1997), she is also the former United Nations High Commissioner for Human Rights (1997–2002), and current President of Realising Rights: The Ethical Globalisation Initiative, much of her life has been dedicated to the cause of human rights. As an academic (Trinity College Law Faculty), legislator, and barrister, she has always sought to use law as an instrument for social change.

Daily Maverick (DM): How have you achieved such an informed view of South Africa?

Mary Robinson (Robinson): I’ve been to South Africa quite a lot and like I said in my lecture, I have a sense that this is my other country apart from my native country that I particularly love, [that I] want to see succeed, and I did really want my message to be listened to. And I know if somebody came to Ireland and just started to give out, then we would say, “Who is that person?” So I did want to have a context. I could have gone on for longer. There were many other things I could say about visits here, but I thought that by establishing that I was a true friend and then reminding [the audience] what a true friend is…It’s the tough love.

DM: Although many South Africans were impressed by your ability to speak so accurately about our situation, rumour is that many in the ANC were decidedly unimpressed. Do you have any links to the ANC? Are you advising them at all?

Robinson: Well, I’ve met some people who are ANC members, including in (a) Meadowlands school this morning. A wonderful woman who said, “I’ve been a lifelong member of the ANC, thank you for your lecture”. (Laughs)

DM: I think it’s the upper echelons of the ANC who were left unimpressed…

Robinson: Possibly, but I’ve always understood that [the fight for] human rights is about speaking truth to power. I was speaking as a true friend; tough love if you like. I hope those that are in the ANC who are at the higher levels will think about what I said and know that many, many people in South Africa agree that there is now a sense that members of the ANC – not all of them, of course, but enough of them – are feeling an entitlement to the fruits of office in a wrong way, which is in fact corruption.

DM: Staying with the ANC, your good friend, Kader Asmal…

DM: …In the last few years of his life, he wasn’t treated well by the ANC.

Robinson: I find it very interesting; I saw Kader for the last time on St Patrick’s Day of the year he died and the day after that. And on St Patrick’s Day we joined together to do the switches, to “green” Table Mountain in Cape Town, which was a wonderful joy for both of us and, in fact, Kader tried to take a speech out of his pocket and they said, “No, no speeches.” (Laughs)

But he did express to me real frustrations at the time. He was one of the voices I heard as a good friend of South Africa who believed so much in due process, in justice and non-discrimination and so on. And he was very frustrated at that time, but after his death I saw the tributes, and I thought to myself, “Why is it after his death that he is so valued?” He was wonderfully valued in Ireland and still is, as someone who contributed greatly to our development and made us understand Apartheid and why it was necessary to fight it, but why is it that somebody like that has to die to be truly valued? And I think that in itself is an indication that he should have been listened to more in his lifetime.

DM: I suppose that says a lot about society as well…

Robinson: Well, it’s not that unusual. We have the same situation in Ireland – it’s only after their death that people are truly appreciated. It’s because they are true to values.

DM: In your opinion, what is South Africa’s image abroad today?

Robinson: A couple of people have asked me this question on this trip, and I’ve had to reply very honestly – not as good as it was. South Africa is regarded as being an extraordinarily important country – not just for South Africa, but for Southern Africa, for the BRICS, working now in a new way in which power is becoming more shared – thankfully. I don’t like a bipolar or a unipolar world. I like a multipolar world but on many occasions people have been surprised that South Africa has not seemed, internationally as well as internally, to take a decision that affirms the true values of your Constitution and the vision of those who were there at the beginning – Madiba himself and others.  and at the same everybody knows that countries go through different phases, which was my essential message. Ireland is not in a good place at the moment. We have our own humiliation of losing our economic sovereignty, and we’re now regaining it slowly and painfully. So my message is a very encouraging one.

And it’s a message particularly to young people. I singled out young people at the beginning. People of South Africa and young people because I wanted them to use social media to become those citizens who engage with the society in South Africa, become data providers, become fact checkers and use platforms like Ushahidi and find out how to address those issues that need to be addressed – holding those with power to account.

DM: You’ve mentioned the financial crisis and its effect on Ireland, what can South Africa learn from the Irish example?

Robinson: Perhaps it is that we are reinventing ourselves. The government is aware that it has to take very hard and difficult decisions. It’s making the government less popular but it’s saying, “We have to take these decisions. There’s no other course.” And it towns and villages around Ireland we’re going back to doing what served us well. The spirit of Mehel that I spoke about (earlier at GIBS) which is like Ubuntu. People are more neighbourly. They are more willing to volunteer. Retired teachers are coming back to fill gaps – I’ve seen this in various places and it’s by no means easy. People are angry and they are hurting. They blame the relatively few who caused this economic mess – the greedy developers and the bad bankers, and yet it’s often the poorest who are suffering more.

DM: That’s equally true for South Africa as well; it’s the poorest who are still suffering…

DM: As a young politician you led the campaign to legalise birth control for women in Ireland. Years on, we’re seeing birth control being debated all over again, particularly in the US. Does this negate the progress we made?

Robinson: I think we’ve learned that democracy is about constant vigilance. It’s not straightforward, there will always be setbacks and you get particular be it religious fundamentalists, Christian fundamentalism – a partly conservative approach and actually trying to put women in a more traditional role. And we have to resist that. We also need to understand that we need to get the work-life balance better for both men and women – by men taking on more of those roles of homemaking and child rearing – it’s an important area that we still haven’t got right. I do worry; it’s not just in the United States, it’s also in parts of Latin America.

DM: But at the same time, how far do you think we’ve come in changing attitudes to the roles women play in society?

Robinson: [I took] part on (Tuesday) in a wonderful discussion with Graca Machel and Brigalia Bam … and together we listened to papers and even the discussion (at GIBS on Wednesday). I think I’m coming to a sense of a women’s movement which was extraordinarily important in the struggle for freedom in this country and immediately afterwards, but then some of those women who were involved in the movement got involved in representative positions and perhaps some of them got a bit distanced from the grassroots issues. But also the women’s movement itself seemed to say, “No, we’ve got our own government, our own parties in power” and they sat back.

There is a real need to reinvigorate that movement precisely because maybe this society, if anything, has become more patriarchal, and that has to be combated. That affects the girl child from the beginning and she has to know her importance and her self-worth in the family, in the community, in the school – all the way. So I would say to young South African women – and I’ve met some extraordinary young South African women – you have to get active, use social media, document, use the tools available. Be more proactive. You know, if I had those tools when I was fighting in Ireland, I could have fought a better fight. So it’s over to this generation now. Feel empowered. And if you start to do it, if you start to feel your voice heard, you will never go back. And not only will it feel much better for you but you will actually change the situation. That’s the good news. DM