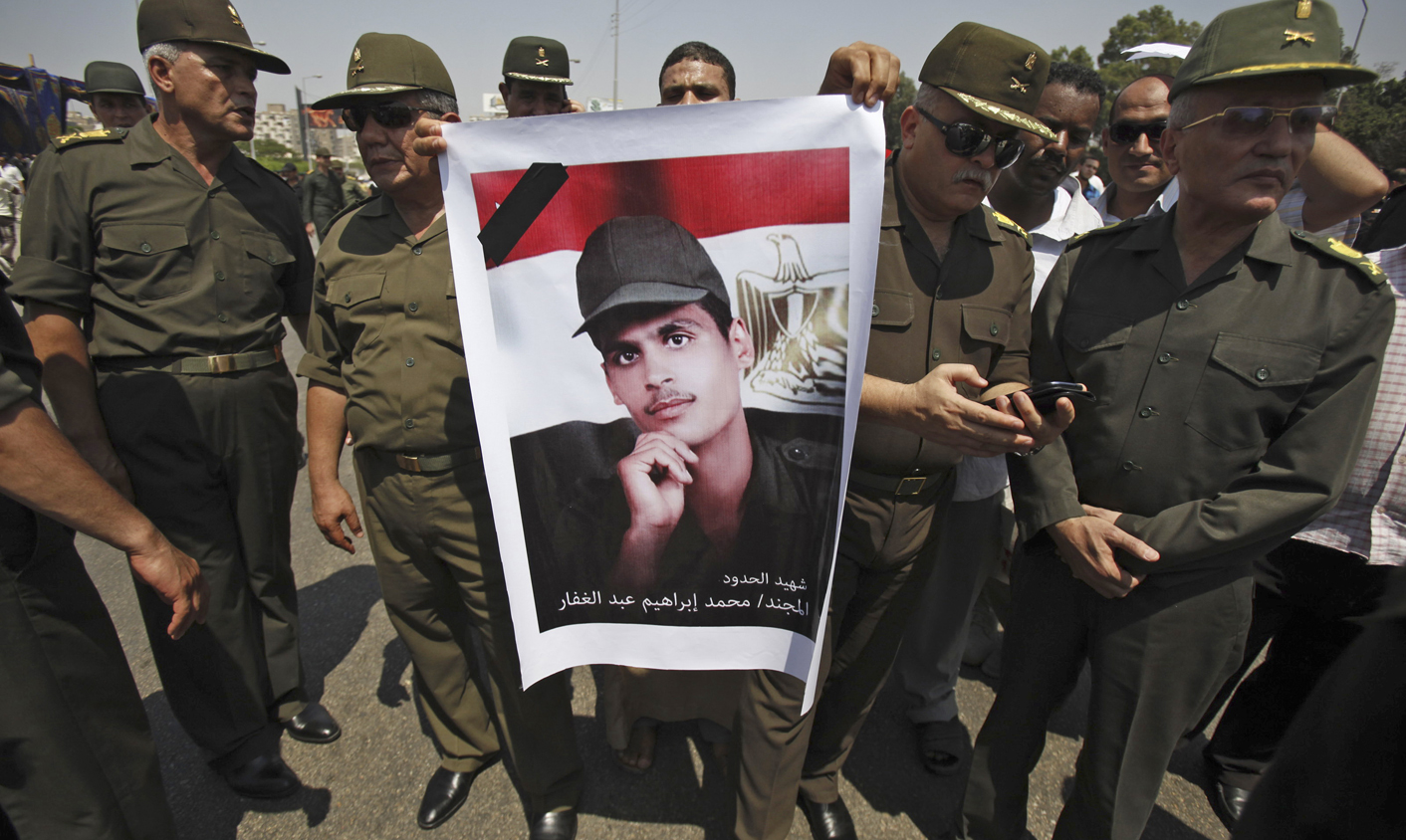 The ease with which militants overran an Egyptian border post and rode an armoured personal carrier into Israel before the suicide-vest laden passengers were killed by an Israeli ground-and-air operation underlines the Sinai's increasingly fraught security situation. It also threatens delicate relations between both countries and Hamas in the Gaza Strip - but could prompt Egyptian and Israeli forces to work more closely than ever on security. By VICTOR KOTSEV (Asia Times Online)

The sophisticated attack in which 16 Egyptian soldiers and at least seven terrorists were killed on Sunday near the Egypt-Israel border threatens to unravel the delicate relationship between Cairo, Jerusalem and the Palestinian Hamas militant organization which controls the Gaza Strip. In all likelihood, it will also impact the expected Palestinian bid for non-member status at the United Nations next month, as well as the already explosive state of affairs inside Egypt.

Several slightly different versions of what exactly happened exist, but it is particularly shocking that the militants – believed to be Global Jihad operatives from the Sinai Peninsula and the nearby Gaza Strip – set out by attacking an Egyptian military post. The terrorists chose a time when the soldiers were praying and preparing to break their Ramadan fast in order to maximize the element of surprise, prompting the Egyptian military to brand them as “infidels”.

Shortly after 7 pm, a group of around 35 armed men arrived at the camp in all-terrain vehicles and opened fire with heavy weapons, including rocket-propelled grenades. Within minutes, 16 Egyptians were dead and another seven wounded, three critically. The attackers proceeded to hijack an armoured personal carrier (APC), which they rammed through the border gates separating Israel from Egypt. A pickup truck loaded with at least half a tonne of explosives followed, but got stuck at the gate and exploded for an unknown reason a little while later.

After a spectacular 15-minute chase on the Israeli side of the border, which involved firefights with Israeli ground forces, tank fire and an air strike, the APC was destroyed and all the terrorists inside – seven or eight in total – were killed. Most of them were found to be wearing explosive suicide belts, an indication that they were planning to execute a multiple-casualty attack inside Israel.

For the Israelis, the action began several hours earlier, when their air force killed a militant in Gaza and injured another. Their army and intelligence services then announced that a major attack on the border with Egypt had been successfully thwarted, even as dozens of rockets and mortar rounds rained on southern Israel in retaliation. While representatives of the army denied any connection between the two incidents in interviews with the Israeli press, Israeli military units had been put on high alert, which likely helped prevent a greater tragedy.

The Egyptians had been similarly alerted, but were nevertheless caught by surprise. According to most reports, their force was greatly outgunned by the terrorists. In all, the attack was similar in some ways to several other major incidents over the past few years which originated in Gaza but were executed through Sinai, yet differed in its unprecedented complexity and scope.

Regardless of the advance warning, as of Monday night there was little clarity as to the exact perpetrators, and no group had claimed responsibility. While an Egyptian operation in Sinai aimed at mopping up the remaining terrorists continued, the finger-pointing quickly turned into a grotesque exercise on all sides.

The Israeli defence minister blamed al-Qaeda, even as the Israeli ambassador to the United States blamed Iran. The Egyptian military pointed a finger at Gaza militants, while the Egyptian Muslim Brotherhood (the other main political force in the country), backed by Hamas and the Lebanese militant organization Hezbollah, claimed that Israel itself was behind the attack.

“This crime can be attributed to the [Israeli spy service] Mossad, which has been seeking to abort the revolution since its inception and the proof of this is that it gave instructions to its Zionist citizens in Sinai to depart immediately a few days ago,” a Brotherhood statement cited by Reuters read. This proclamation recalled a bizarre claim from 2010, when Egyptian officials accused the Mossad of dispatching a shark to destroy their tourism industry.

The confusion and attempts to shift the blame can be explained by the fact that the affair embarrasses both Egypt and Hamas, and places Israel in an awkward situation. According to Israeli military analyst Ron Ben-Yishai, the aim of the attack was to cause a military confrontation between Israel and Egypt. In support of this thesis, a similar cross-border raid last summer resulted in a firefight between Israeli and Egyptian soldiers, leaving five Egyptians dead and causing a major diplomatic scandal.

“The terror attack, had it not been thwarted, could have led to a direct clash between the Israeli and Egyptian armies,” writes Ben-Yishai in the Israeli daily Yediot Ahronot. “The third ‘victim’ was supposed to be the Muslim Brotherhood movement in Egypt, which Global Jihad deems too moderate.”

Hamas, which is an offshoot of the Muslim Brotherhood, has also made several overtures in the past few months which have branded it as increasingly moderate, and it stands to lose much from the incident. Egypt immediately closed the border crossing with Gaza at the town of Rafah “indefinitely”, and reportedly also cut off traffic along the many underground tunnels linking Sinai with the strip.
Following the attack, many Egyptians condemned the various Palestinian militant organizations in Gaza, and some Egyptian media even threatened a military operation there akin to the ones periodically conducted by Israel. In short, many of the steps taken by Hamas and the Egyptian Muslim Brotherhood to boost their relationship in the last months were reversed in a few hours, and both were left scrambling to prevent a further decline.

It is hard to say how exactly the intrigue will play out. Following the ouster of former Egyptian president Hosni Mubarak, relations between Egypt and Israel deteriorated significantly, and some analysts speculate that the incident will reverse this trend.

Certainly, security considerations demand better cooperation between the two countries – Israel is reportedly considering a new Egyptian request to allow more troops into the Sinai peninsula, which was largely demilitarized following the 1979 peace treaty – but whether this need will outweigh the populist rhetoric on the Egyptian side is unclear.

Just how deep the mistrust runs can be gleaned from another bizarre recent incident, when the newly elected Egyptian president, the Muslim Brotherhood’s Mohammed Morsi, sent a conciliatory letter to Israeli President Shimon Peres. Shortly afterward, as domestic criticism against Morsi mounted, he denied having sent any letter.

Similarly, the attack may push the Muslim Brotherhood closer to its arch-nemesis, the Egyptian army, but whether such a development will last is doubtful. Amid increasing chaos and almost daily riots in the country, sparked by power outages and shortages of basic goods such as cooking gas, the Brotherhood and the army are playing a game of cat and mouse, most recently over the drafting of the new Egyptian constitution. A ruling on the issue by the Supreme Constitutional Court, which is widely perceived as biased in favour of the army, is expected next month, and a tense feeling persists along the Nile.

Finally, the incident will impact the relationship between Hamas and its main Palestinian rival, the Palestinian Authority (PA), which rules over the West Bank. The ouster of Mubarak was seen as a major blow to the PA, and, conversely, the ascendancy of the Muslim Brotherhood in Egypt provided a boost for Hamas. Now, however, this trend may be reversed to an extent.

There have been increasing indications that the PA plans to renew its bid for recognition at the United Nations next month, perhaps in the form of an application for non-member observer status. Hamas has in the past been critical of the PA’s overtures at the UN, while a parallel intra-Palestinian reconciliation process between the two administrations has stalled. It is possible that the two rivals will be temporarily drawn closer together by the fallout from the attack, which could potentially delay the diplomatic initiative.

One thing seems clear: the incredibly complex attack has caused great consternation to all major parties involved – the Israelis, the Egyptians and the Palestinians. Only luck and an advance warning prevented a larger and bloodier incident that could have pushed the already strained relationships over the brink. Next time – and given the growing chaos in Sinai, it appears to be only a matter of time – they may not be as lucky. DM

This edited article is used courtesy of Asia Times Online, who retain copyright.

Photo: The brother (C) of soldier Mohamed Ibrahim, killed during an attack at a checkpoint along the Sinai border with Israel and other 15 soldiers by unknown gunmen, shouts as he carries his picture in between members of Egypt’s Supreme Council of the Armed Forces (SCAF), at the tomb of the late President Anwar al-Sadat and the Unknown Soldier monument in Cairo August 7, 2012. An Egyptian official said insurgents crossed into Egypt from the Gaza Strip before attacking the border station on Sunday, killing 16 police officers. REUTERS/Amr Abdallah Dalsh