Myanmar and the vindication of quiet diplomacy 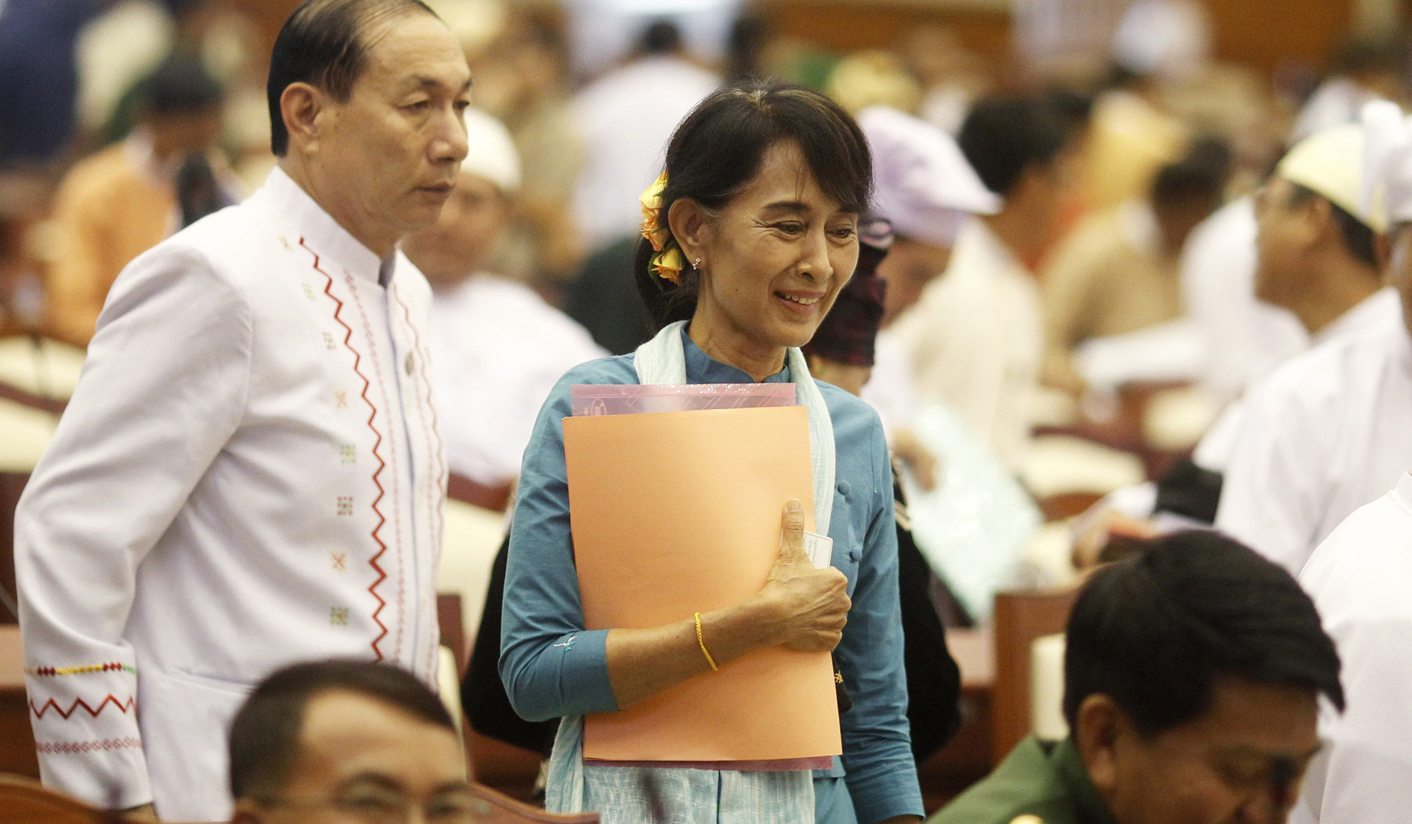 What do you do with a problem like Myanmar? It’s something Asian leaders have puzzled over for years, and all signs suggest they’ve finally found a solution to rehabilitate the Southeast Asian pariah state. Africans, take note: this successful approach bears a striking resemblance to a little something Thabo Mbeki likes to call ‘quiet diplomacy’. By SIMON ALLISON.

The centrepiece of the Giant Reclining Buddha temple in Yangon is exactly what it says on the tin: a giant sculpture of the Buddha in a state of languorous repose, looking like he doesn’t have a care in the world—which, as far as Buddhism is concerned, is really the point.

Surrounding the temple is a complex of 87 monasteries, representing various schools of the religion and different regional groups. The monasteries come in all shapes and sizes, from simple wooden huts raised slightly to protect against sudden flooding to ornate, whitewashed buildings with a few basic amenities.

Out of the windows and strung along all the pavements are bright squares of red and orange fabric; even monks need to do laundry. In fact, unlike the Giant Reclining Buddha, monks have plenty of temporal concerns, and these monks in particular have more than most.

In 2007, Myanmar’s military junta brutally suppressed the Saffron Revolution, where thousands of monks took to the street in a protest precipitated by the government’s sudden decision to scrap fuel subsidies, raising the cost of living substantially. The monks also demanded democracy, and specifically the release from house arrest of Nobel Peace Prize laureate Aung San Suu Kyi, universally known as The Lady. Tens of thousands of ordinary people joined their protest, acting as a human shield against the inevitable government crackdown. Officially, 13 people were killed, but this number is believed to be significantly larger; and hundreds of people were arrested, mostly monks who had started the temporary insurrection.

Many of those monks were from the monasteries around the Giant Reclining Buddha temple, a hotbed of discontent. Of the 87 monasteries, 22 took part in the protests. Every night, the rebellious monasteries hold vigil for their colleagues that remain in prison and for those who have been released but were so scarred by their experience that they abandoned the spiritual life. As punishment, these orders have been relegated to a lower class of accommodation within the complex, and denied access to any state facilities, including hospitals.

The monk who told me all this spent a few months in prison for his participation in the Saffron Revolution, where his leg was broken by security forces. I won’t name him. “Things were bad,” he said. “Very bad. But they are improving.”

His optimism stems from recent reforms announced by the government, which is now based in the shiny new ghost city of Naypyidaw. The Lady was released; her party won a landslide in by-elections and are just a few seats away from a parliamentary majority; absurd foreign exchange rules have been lifted; amnesty granted to hundreds of political prisoners; and media and Internet censorship slowly relaxed.

“We could not have had this conversation before,” the monk told me. “Even in the monastery, you never knew who was listening. Everything is changed now. Aung San Suu Kyi is in parliament, everything is more open. It’s not perfect, but it is better.”

It’s certainly a long way from perfect. Despite the progress, the junta remains firmly in control and up to all of its old tricks. Outside major urban areas, on the periphery of the 48-million strong country, the military are not afraid to use extreme force to quell separatist organisations representing various ethnic groups, such as the Karen and the Kachin. And in Rakhine state, violence between Buddhists and Rohingya Muslims (who are not recognised as Burmese citizens) has been fanned by state security forces. Human Rights Watch last week accused them of targeting the Rohingya through sexual violence, killing and mass arrests.

But this hasn’t stopped the international community from getting excited about Myanmar’s relative progress. Both the United States and the European Union recently lifted some of the sanctions levelled against the junta. Easing of the economic sanctions is expected to follow shortly, which would allow Myanmar to participate fully in the international economy for the first time in more than two decades.

Leading Myanmar’s reforms is the country’s new president, Thein Sein. After long-term dictator Than Shwe stepped aside for reasons that remain unclear (although cancer is the most popular explanation), Thein Sein, a regime stalwart, was given the top job. Think of him as FW de Klerk to Aung San Suu Kyi’s Mandela.

More interestingly, from an African perspective, is the support that Myanmar has been getting from the Association of Southeast Asian Nations (Asean), the region’s Sadc-equivalent. More than just support; some argue that Asean’s involvement was in fact the trigger for the recent progress, or at the very least a necessary condition. Malaysia’s prime minister, Najib Razak, certainly thinks so: “The Asean way won Burma over”, ran the headline of a recent op-ed he wrote in the Wall Street Journal.

But even Razak (as leader of an Asean country he’s hardly a neutral observer) acknowledges that Asean’s approach hasn’t always been well-received in the international community. “Over the past four decades Asean has been widely credited with helping its member nations boost trade, investment and growth, but it has also been criticized in foreign policy circles for doing too little to promote democracy and human rights,” he wrote.

This criticism stemmed from Asean’s very public rejection of traditional methods used by the international community to whip pariah states into line. Razak continued: “For many decades, Myanmar was on the receiving end of very public diplomatic scoldings, often backed up by sanctions. Implicit in this stance was the idea that democratic nations such as Malaysia should shun their less-free neighbours, and that the only way to bring about improvements was to economically cripple those who had not yet embraced the ballot box. But Asean members took a more nuanced view, believing that constructive engagement and encouragement were just as effective, if not more, than sanctions and isolation in creating positive change.”

Asean’s ‘constructive engagement’ approach favours dialogue over confrontation or coercive measures. The idea is to exert some kind of moral influence over Myanmar, or other problem countries, without isolating it from the international community—an isolation that would only increase the regime’s excesses and push it closer to China. It recognises that the pace of change is slow, and the best way to get Myanmar’s recalcitrant generals on board is to show them what they’re missing. An important element of the policy is a recognition that peaceful transition can only happen with the cooperation, and indeed the leadership, of the regime.

It’s a policy that contains unmistakeable echoes of Thabo Mbeki’s ‘quiet diplomacy’. This much-maligned doctrine has guided SADC’s approach to Zimbabwe and strongly influenced how the African Union handles conflict resolution. Like Asean’s constructive engagement, quiet diplomacy is built around finding consensus, avoiding confrontation and measuring progress in increments rather than revolutions.

And like Asean, SADC and the African Union have been pilloried by the international community for supporting dictators and standing idly by while human rights abuses are committed. Western nations in particular would rather the likes of Zimbabwe and Myanmar were cut off from polite diplomatic society, pushed into the naughty corner until they decide to repent.

Perhaps neither approach is right—or, more accurately, perhaps they both are.

“While Asean’s approach might not have worked without Western sanctions simultaneously in place, it is probably just as true that the US’s and EU’s policy would not have worked without Asean’s complementary policy,” wrote Kilian Spandler, an academic studying Myanmar’s transition. “By freezing relations with Burma and imposing sanctions, the West hit the regime hard, but it also lost the chance to influence the regime’s policy—in contrast, Asean was able to push the country in the direction it wanted by creating incentives for policy change. While the West provided the stick, Asean fed the carrot—an unintended division of labour, but one that worked.”

The lesson in this for African leaders is that there is space for more nuanced, non-confrontational foreign policy responses in dealing with pariah states and other delicate political transitions. Asean’s success in Myanmar, assuming it’s not a false dawn, is at the very least a partial vindication of Mbeki’s quiet diplomacy, and at most it is a glowing recommendation. Now all that’s left to do is wait and see if it works in Zimbabwe. DM

Photo: Myanmar pro-democracy leader Aung San Suu Kyi walks among Members of Parliament in a meeting room as she attends a parliamentary meeting at the Lower House of Parliament in Naypyitaw July 10, 2012. REUTERS/Soe Zeya Tun