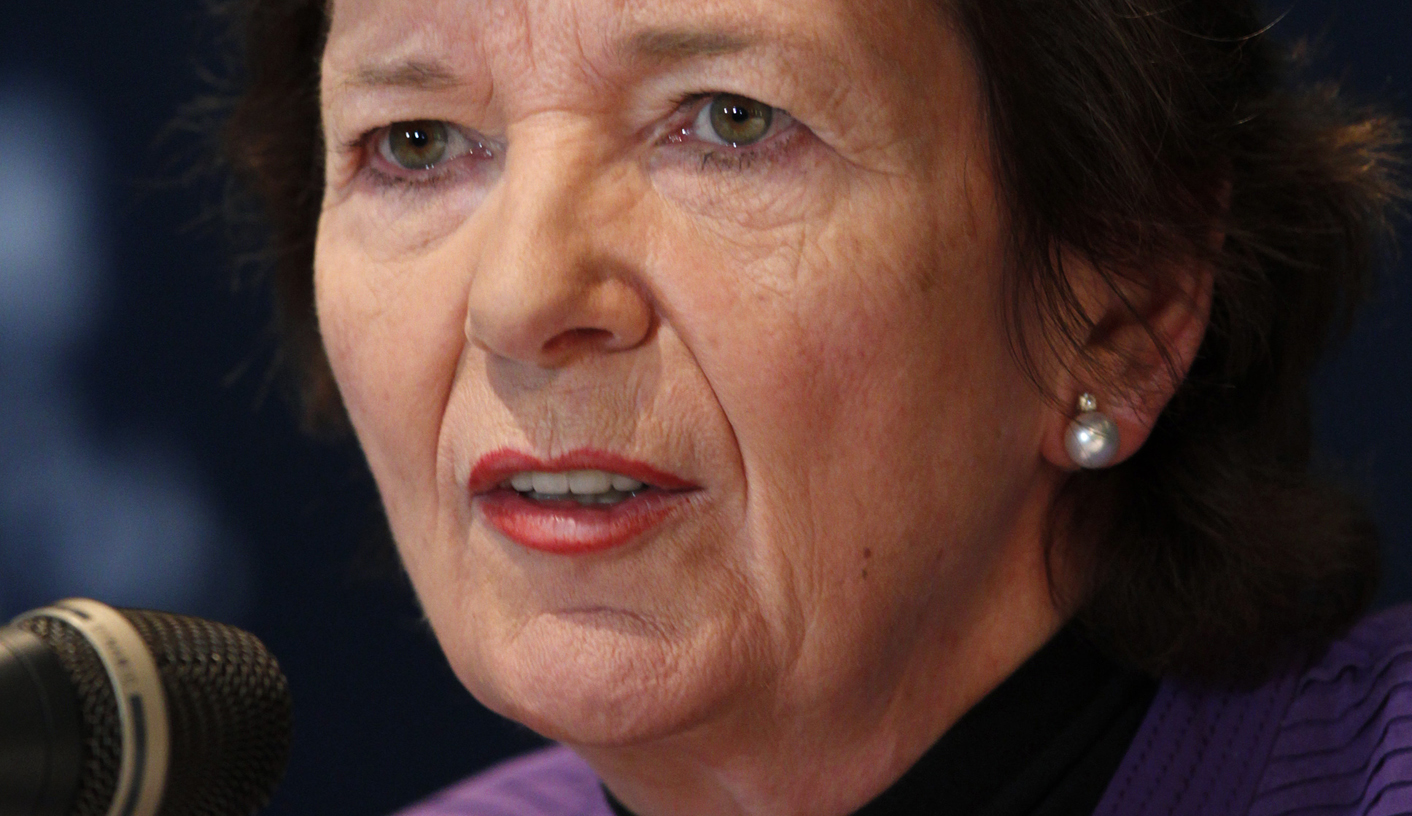 It’s about time someone asked South Africa the hard questions: Is this young democracy living up to all the high expectations and ideals? Why is South Africa’s education system underperforming? Is government being held to account for the inequities, the imbalances and the injustices in society? All these – and a candid declaration that the ANC’s “moral authority has been eroded” have been delivered courtesy of Mary Robinson. By RANJENI MUNUSAMY.

Like any misbehaving, directionless 18-year-old flaying about on a drug high, South Africa needed a sit down with an “elder” for a good talking-to. It was former Irish president and UN Commissioner for Human Rights, Mary Robinson, who stepped up at the tenth annual Nelson Mandela lecture in Cape Town on Friday.

Few people in the world are qualified to do so, and rather than giving South Africa a mighty smack, Robinson asked the uncomfortable questions diplomatically and offered wise counsel.

Robinson is a member of The Elders, a group of world leaders who contribute their wisdom, independent leadership and integrity to tackle some of the world’s toughest problems – in other words, the wise uncles and aunts of the world who can be counted on for sage advice in times of trouble. The founding members of this group also include Mandela, Graça Machel, Kofi Annan and Jimmy Carter, and it is chaired by Archbishop Emeritus Desmond Tutu.

Unfortunately the bungling public broadcaster was unable to televise the lecture live as it was billed. But listening intently among the veritable who’s who in the audience was Deputy President Kgalema Motlanthe, Western Cape Premier Helen Zille, Cape Town mayor Patricia de Lille and a host of struggle veterans, MPs and civil society leaders.

Robinson said she felt a “great connection to South Africa” and that next only to her native country, “[t]his is the country I have most grown to love: for its historic victory over the evil of Apartheid and its promise of a ‘rainbow nation’; for producing two great moral giants of my lifetime, Nelson Mandela – Madiba himself – and Archbishop Desmond Tutu”.

She added that she studied law in the 1960s in Dublin under South African veteran Kader Asmal, “who instilled in me the values of rule of law, due process, equality and non-discrimination – values so well enshrined in your admirable Constitution”. She said she then joined the anti-Apartheid movement which Asmal and his wife Louise founded in Ireland.

Robinson represented Ireland at Mandela’s inauguration in 1994, and has visited regularly since then, among other things as an extraordinary professor at the University of Pretoria, linked to its Centre for Human Rights and Centre for the Study of Aids.

“I feel it necessary to set out my credentials as a friend, because my challenge today is to speak to you, South Africans, as your friend. A true friend tells you not only what you want to hear but what you need to hear.”

And with that came the gentle dressing-down and motherly advice South Africa so needed to hear.

“I have always emphasised that freedom from want is a core part of human rights, as affirmed in the Universal Declaration of Human Rights, including rights to food, safe water, health, education and shelter. In spite of the innovative provisions of the South African Constitution, can it be truly said that freedom from want has been adequately secured for all in the past 18 years?”

Robinson even dared to venture into the territory that the ANC government refuses to acknowledge is contrary to the spirit of the Constitution, and is rubbishing its international image.

“In the context of ideas of freedom and democracy, of citizenship and common purpose, inherent in the concept of truth is the need for transparency and accountability in government action. In order for citizens to remain the stewards of democracy, issues of accountability and transparency in governance are key. It is therefore with great concern that I have followed the progress of South Africa’s ‘Protection of State Information’ legislation – knowingly styled by its detractors as the ‘Secrecy Act’.

“Perhaps it is not my place to pronounce on the levels of corruption at play in today’s South Africa. But, from my experience as a human rights lawyer, I can give you a certainty: if you enact a law that cloaks the workings of state actors, that interferes with press freedom to investigate corruption, that stifles efforts by whistleblowers to expose corruption, you are sure to increase those levels of corruption tomorrow,” Robinson said.

“The public interest demands that basic truth, of having both transparency and accountability in government. Secrecy is the enemy of truth in this regard,” she concluded on the subject.

Owing to the SABC muddle, we were unable to see Motlanthe’s reaction to these uncomfortable truths.

Perhaps the most stinging rebuke was reserved for the ANC itself. But first there was gentle stroking of its achievements.

“What the ANC has achieved in those hundred years is remarkable: from the defiance campaign, the resistance movement, armed struggle, banishment, to becoming the governing political party since 1994, leading the way in transforming the country according to that vision.”

Then came the wallop: “Sadly, though, in recent years my South African friends tell me the ANC’s moral authority has been eroded, tainted by allegations of corruption; a temporary betrayal of its history.”

And a bit of finger wagging: “Meanwhile, there remains, in the transformation process, much unfinished business. We cannot deny that South Africa faces serious problems…

“It is hard to address all the structural problems and inequalities in such a short time. Still, you need to ask yourselves some uncomfortable questions: Why is South Africa’s education system underperforming? Why are the rates of illiteracy so high? What has caused the culture of non-attendance and resistance to learning? How has such disparity in the allocation of resources been allowed to occur? How can the inequities in the system be resolved so that every South African child has equal access to quality education? How can the teachers’ union be motivated to drive efforts towards positive change? Those questions need to be addressed if South Africa’s hard-fought democracy is to be sustained for generations to come,” Robinson said.

Then it was the tough love bit: “But I don’t stand here to preach, even though I may sound at times as though I am preaching. I prefer to encourage. South Africa has shown itself to be a resilient nation. It has also shown itself to be an exceptional organiser of world events…

“To me, an outsider, but a genuine friend, South Africa is a nation of paradoxes. When I hear about the tireless work of the many non-governmental organisations, youth groups, women’s’ groups – working with local communities or working at a national level, I think civil society in South Africa is thriving! But then, my South African friends tell me, wider civil society is often disengaged.”

More tough questions: “What are religious leaders saying and doing about South Africa’s problems? What are the professions saying? What are the unions saying? Are they doing enough? Are they truly working to hold government to account for the inequities, the imbalances, the injustices they witness close to home? Or are they more concerned with their own survival, their own advancement, to the detriment of that wider common purpose of achieving a constitutional democracy: that vision of a united, non-racist, non-sexist, democratic and prosperous South Africa?”

She rounded up as any wise aunt would after a frank talk, with words of encouragement and a gentle nudge forward.

“Your admirable Constitution opens with stirring words: ‘We, the people of South Africa … believe that South Africa belongs to all who live in it, united in our diversity.’ As you approach your early twenties – and you are a young democratic country in that sense – you have a great opportunity to draw on your strengths, renew that inspirational vision that the world stood in admiration of in 1994, and continue to build your rainbow nation, block by block.”

The candid assessment was exactly what South Africa needed, and though there were no new revelations, it was of significantly more value to South Africa to have an Elder speak out of concern than the numerous rating agency downgrades the country has received of late.

So here’s to you, Mrs Robinson. DM

Photo: Former Irish President Mary Robinson speaks to the media during a news conference after a visit to Pyongyang by Robinson and three other former state leaders known as the Elders, at a hotel in Seoul April 28, 2011. REUTERS/Jo Yong-Hak