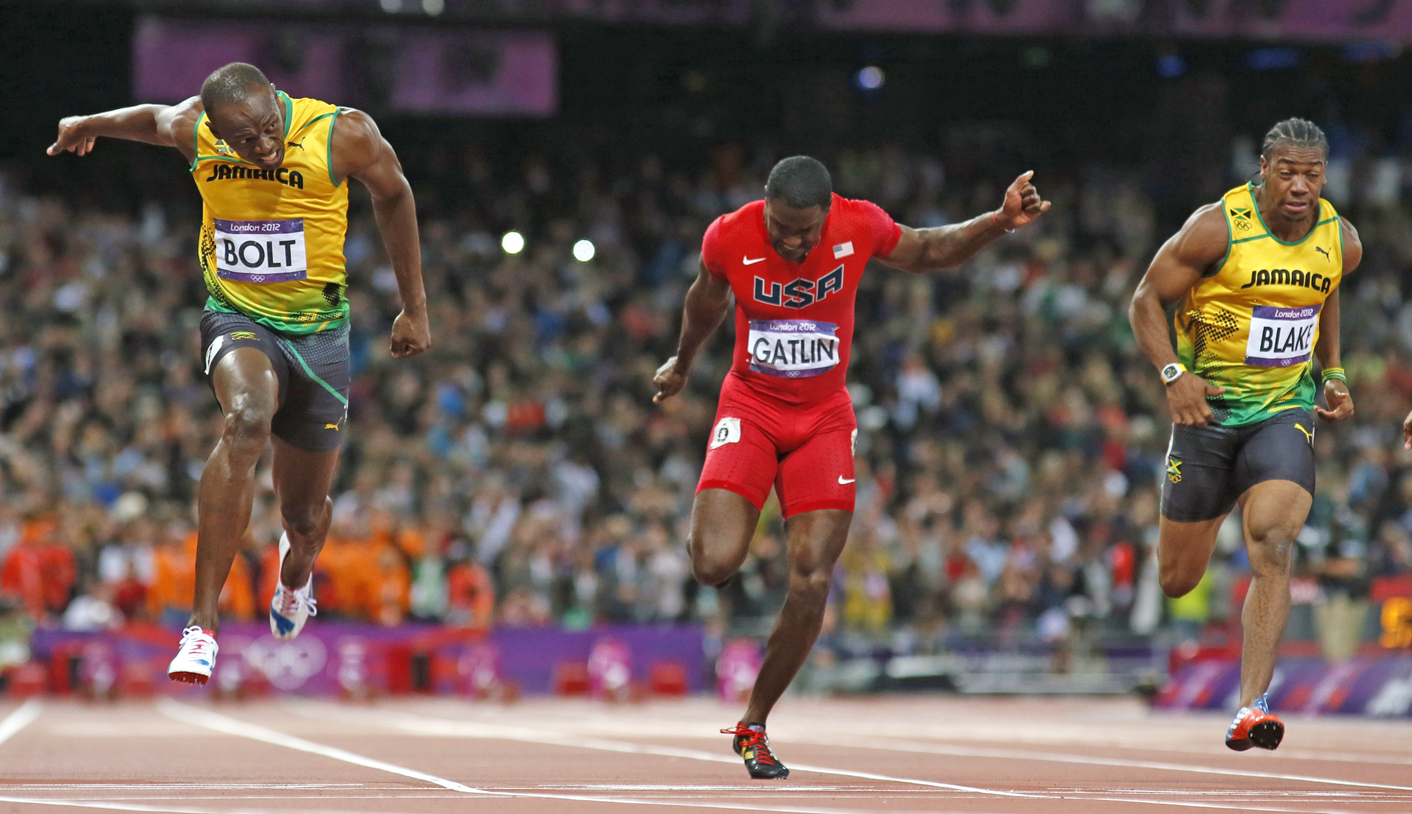 Jamaican Usain Bolt retained his Olympic 100 metres crown in spectacular style on Sunday, scorching to the second-fastest time ever run at 9.63 seconds and becoming the first man to win back-to-back titles on the track. By Mitch Phillips.

Bolt’s 9.58-second run to win the 2009 world title is the quicker run and Sunday’s brilliant display proved he had completely recovered from the hamstring problems that had given a sliver of hope to his rivals in the build-up to one of the most eagerly-anticipated races in history.

World champion Yohan Blake made it a Jamaican 1-2 when he won silver in 9.75 seconds and 2004 Olympic champion Justin Gatlin of the United states grabbed bronze in 9.79 as the first seven men all broke 10 seconds. Asafa Powell pulled up with a groin injury.

Blake’s time equalled his personal best and Gatlin beat his. Tyson Gay finished fourth in a season’s best 9.80 seconds with fellow American Ryan Bailey fifth in an equal PB of 9.88.

But it was all about Bolt who said repeatedly that he needed back-to-back titles to cement his place among the sport greats.

Carl Lewis is the only other man to win two Olympic 100m titles and the American’s second gold came only after Ben Johnson was disqualified for doping.

Bolt was slow out of the blocks on Sunday and trailed Blake, who beat him in the Jamaican trials, and Gatlin, back in the mix after serving a doping ban.

However, his massive stride reeled them in and he roared through the line, barely easing his speed as he tore round the bend to soak up the adulation of the delirious crowd.

“When I went out in the first run, I felt ‘I can do this,’ Bolt told the BBC in reference to his opening heat on Saturday.

“I was slightly worried about my start, I didn’t want to false start again. So I think I sat in the blocks a little bit, I don’t think it was the best reaction in the world, but I executed and that was the key.

“Remember I told you my coach said ‘stop worrying about your start’, the best of your race is at the end, that’s where you rule. So I stopped worrying about the start and I executed, so it worked.”

Bolt, who was disqualified from last year’s world championship final for a false start, will now bid to complete an unprecedented double-double by retaining his 200 metres title and will also seek a sixth sprint gold in the 4×100 metres relay.

“Usain knows what it takes, he is a world beater and he is the fastest man in the world,” said Blake. “But I got a medal in my first Olympic games and a lot of that is down to Usain and our coach.”

Jamaican Shelly-Ann Fraser-Pryce also retained her women’s title to give her country a flying start in their sprint showdown with the United States. DM

Photo: Jamaica’s Usain Bolt (L) crosses the finish line ahead of Justin Gatlin of the U.S. (C) and Jamaica’s Yohan Blake to win the men’s 100m final during the London 2012 Olympic Games at the Olympic Stadium August 5, 2012. Bolt set an Olympic record with a time of 9.63 seconds, while Blake finished secodn and Gatlin third. REUTERS/Lucy Nicholson