Mangaung and the feud of the ANC youngbloods 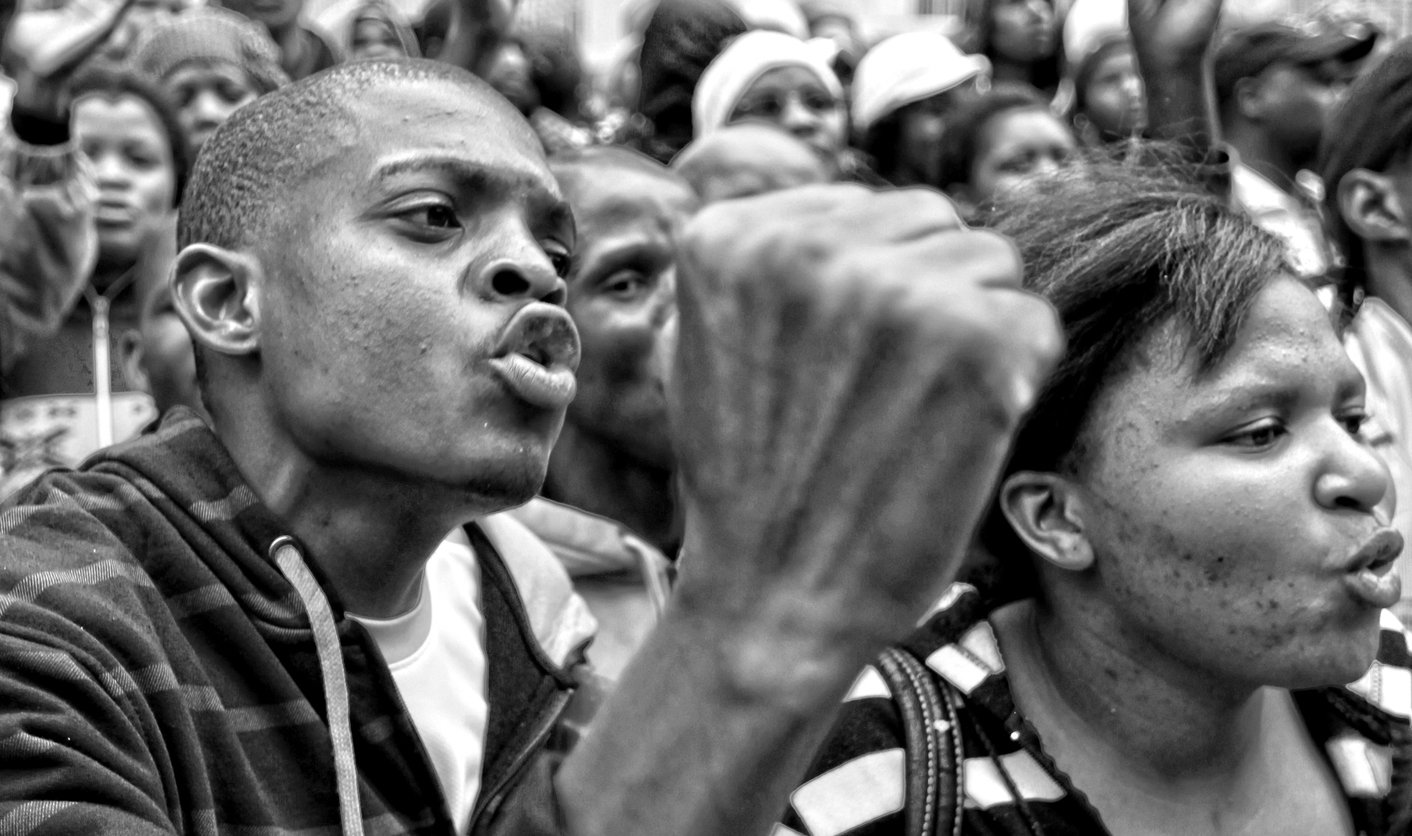 Lying in the debris of the ANC factional battles are the allied youth formations who at one time collectively represented a significant chorus impacting on the ruling party. As they head for the party’s national conference, there are attempts to revive the united youth voice and heal the deep divisions. But there is one huge issue of contention: Jacob Zuma. By RANJENI MUNUSAMY.

It was a formidable line-up of young leaders representing youth organisations allied to the ANC who addressed the media on Thursday, 18 September 2008. The youth leaders, under the banner of the Progressive Youth Alliance (PYA), told the world in no uncertain terms that the most powerful man on the continent, Thabo Mbeki, would be removed from his position as president of South Africa within days. Late the next night, the ANC national executive committee took the stunning decision to recall Mbeki.

Among the distinctive features of that unforgettable week after Judge Chris Nicholson’s judgment implying there was political meddling in Jacob Zuma’s corruption case, it became apparent how powerful the youth was in the ANC. Of course, then-ANC Youth League president Julius Malema was the most notable voice in the group, and belted out the most quotable soundbites.

But the PYA, made up of the ANC Youth League (ANCYL), the Young Communist League (YCL), university student movement Sasco, school pupil organisation Cosas and youth religious formations, was a force to be reckoned with. It represented the entire spectrum of the youth in the ANC and therefore used the PYA platform to lobby and speak with a collective voice on a range of issues, including policy matters and appointments.

But it has been years since the PYA has spoken jointly on any matter. In fact, the media conference on Mbeki was the last big event to be addressed by all the youth heavyweights. Signs of discord became evident when the National Prosecuting Authority withdrew charges against Zuma shortly before the 2009 elections. As the youth were at the forefront of the campaign to have the charges dropped, they were billed to have a joint PYA press conference to proclaim their triumph.

But the ANCYL held its own press conference at the ANC headquarters, while the other members of the PYA issued a separate media statement. With all the sensation around the “spy tapes” at the time, nobody paid attention to why the youth movement was suddenly disjointed. It was only when the ANCYL and YCL turned on each other publicly later that year that questions were raised as to how the relationship soured.

When the YCL was launched in 2005, the ANCYL – at the time under the presidency of Fikile Mbalula – was not wildly excited at the formation of another youth structure in the Alliance. However, their backing for Zuma during his two criminal trials united the two youth organisations, and along with Cosatu and the SACP, they led the nationwide support campaign.

SACP general secretary Blade Nzimande, Cosatu’s Zwelinzima Vavi, Mbalula and YCL national secretary Buti Manamela became central to Zuma’s political brains during the trials and ahead of the ANC’s Polokwane conference. Along with Malema, “The Big Five”, as they became known, were top billing at all Zuma support events.

The PYA was formed under Mbalula’s watch as ANCYL president and represented like-minded voices in the student and youth organisations who were all firmly behind Zuma and anti-Mbeki. Malema and Manamela initially had a close relationship, as the YCL national secretary was one of his key backers in the race to succeed Mbalula.

But the moment the Zuma battle was won, it was clear that Malema wanted to chart his own path and develop an independent, dominant voice for the ANCYL.

Then in August 2009, Malema and Nzimande shared a platform at the funeral of former Limpopo MEC Pandelani Ramagoma. In his speech, Nzimande made some biting remarks about uneducated leaders who needed to go back to school, to which Malema took offence.

He later retaliated publicly: “There is a small group of elites in the alliance who present themselves as working-class leaders, while there is very little to show that in everything they do. They spend most of their time drinking red wine. We will never be intimidated by such people.” It was a clear reference to Nzimande, whose love for red wine is well known.

The YCL’s national committee hit out at Malema in defence of the SACP general secretary: “Many men far greater and better than Julius have travelled the road that he seeks to embark, and many more of them were doomed to failure. We doubt if the majority of members of the ANC Youth League share his sentiment of insulting Comrade Blade Nzimande, as we know that many of them hold him in high regard. We also do not believe that insults should come first in the place of intellectual discourse, and that hurling insults is merely a form of expressing intellectual bankruptcy.”

The die was cast and the genial relationship between the ANCYL and YCL was over. The organisations again exchanged crossfire after SACP deputy general secretary Jeremy Cronin criticised the ANCYL campaign for mine nationalisation, saying: “I suspect that comrade Malema and others are missing this bigger systemic picture because when they speak of mineral beneficiation they are thinking of bling … sorry, jewellery.”

An infuriated Malema lashed out, saying: “We also do not need the permission of white political messiahs to think,” which the again earned the YCL’s ire. They got their revenge at the SACP’s special congress in December 2009, when Malema was memorably booed by delegates when he entered the hall.

While the profile of Malema and the ANCYL escalated, principally due to the controversies around them, the YCL’s dipped after Manamela became an ANC MP. The young communist’s voice now only seems audible when it springs to the defence of Nzimande, and it has been central to his campaign for re-election as the party general secretary.

Manamela argues this to be untrue, claiming the YCL is running a youth campaign around education, health and jobs. But asked about the YCL’s muted reaction to the Limpopo textbook crisis, Manamela said he not think it served any purpose to join the lobby charging for basic education minister Angie Motshekga’s head. He said officials in the national and provincial administrations should be held accountable.

The organisation’s relationship with Sasco and Cosas has also soured as factional battles in the ANC escalate. Sasco and the YCL have been particularly at odds as the student organisation has been highly critical of Nzimande’s higher education and training portfolio.

However, this doesn’t mean that that this has pushed Sasco and Cosas closer to the ANCYL, as leaders of the two organisations have been at odds with Malema. Under Malema, the ANCYL has been the only show in town and drifted away from all its previous youth allies.

But the youth organisations in the PYA are reassessing their relationship with the ANCYL now that Malema has been expelled and its deputy president Ronald Lamola is acting in the position. Lamola is less confrontational than Malema and is seemingly open to renewed youth cooperation ahead of Mangaung.

Manamela says he is keen to have bilateral meetings with Sasco and the ANCYL with a view to holding a PYA summit ahead of the ANC national conference, so that the youth can once again develop a strong united voice on some issues.

Asked how he intends to reconcile the ANCYL’s unyielding campaign on mine nationalisation with the SACP’s opposition to it, Manamela said the YCL supported the ANC policy conference decision for “strategic nationalisation” and therefore hoped there could be a meeting of minds with the ANCYL.

However, while the youth organisations could forge a compromise on nationalisation, they are bound to cross swords on one issue: Zuma’s second term as ANC president.

The ANCYL is the champion of the campaign for deputy president Kgalema Motlanthe to unseat Zuma, while the YCL supports the president’s bid to stay on. While Sasco pronounced its support for Zuma at Polokwane, it is unlikely to do so this year due to internal divisions over his candidacy. Cosas appears to be moving closer to the youth league, but also appears to be fractured over support for Zuma.

It is difficult to see how the organisations can be reunited in the next few months in the face of such fissures. Ironically, the issue that marked the strongest point of the youth alliance years ago is the very issue that divides it now: the removal of a president. DM

Photo: Supporters of African National Congress Youth League president (ANCYL) Julius Malema chant slogans during his appearance at the Johannesburg court for a hate speech trial April 18, 2011. Malema is charged for singing ANC’s struggle song “Kill the boer, Kill the farmer”. Afriforum, a white minority group, is claiming that the song is polarizing and dividing South Africa along racial lines and contributes to the continuing killing of white farmers by mainly black assailants. REUTERS/Siphiwe Sibeko