Analysis: Somalia’s new constitution puts the cart before the camel 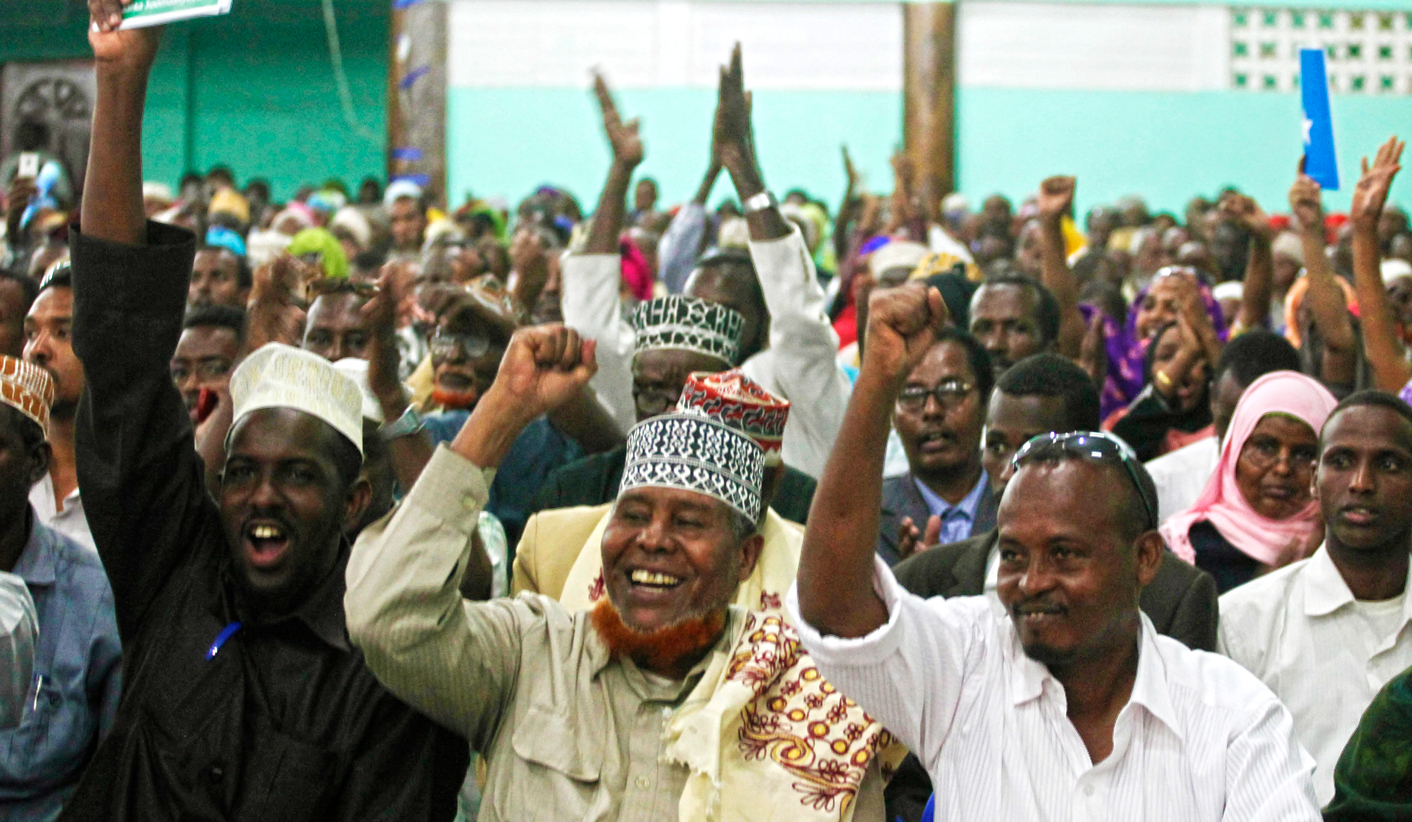 There’s nothing obviously wrong with Somalia’s new constitution. Some bits of it are very good. It’s more the timing that’s the problem. SIMON ALLISON argues that there are a few things that need to be fixed before it’s time to write the document that will be the foundation for a new Somali state - like finishing the civil war, for example.

This week, 825 Somali leaders approved a new constitution in a landmark vote. At least it would have been 825 leaders, but 180 of them didn’t bother to show up; either they couldn’t, for personal or security reasons, or they didn’t feel like this was important enough to bother making the effort.

In the end, 621 of them voted for the draft document, while 13 voted against it and 11 abstained. “Today, Somalia has put its feet onto a democratic and peaceful path. The new constitution will heal Somalia from war trauma and put it onto a more peaceful life,” said Abshir Abdi, one of the delegates who made it.

This is the first in a three-pronged strategy to finally establish a permanent state in Somalia after eight years of the ineffectual Transitional Federal Government, which at times has controlled little more than a square of territory around Mogadishu airport?and only that thanks to military support from African Union troops. The other two prongs are likely to be more contentious. The delegates have to elect representatives to a new parliament and choose a new president. Already, allegations of intimidation and vote-buying are flying.

The constitution itself is not a bad bit of draftsmanship. It guarantees that Islam is the source of all law, and that no religion other than Islam shall be permitted in Somalia. This may sound harsh, but delegates didn’t have much of a choice. These are the bare minimum necessary conditions if anyone hopes to persuade Al-Shabaab to accept the document. Besides, plenty of the delegates are strongly conservative Islamists themselves. And don’t forget that there are many interpretations of Islamic Sharia law, from the Taliban’s hardcore approach in Afghanistan to the United Arab Emirates’ rather softer, more modern version.

Other clauses suggest the delegates lean towards the latter. Female circumcision is outlawed; abortion permitted when the mother’s life is at stake; marriage requires the consent of both the male and the female; child labour and child soldiering are forbidden; and socio-economic rights to water and healthcare guaranteed (although no word on how these will be implemented). The International Development Law Organization looked at all this and said that, on paper at least, Somalia’s constitution offers more fundamental rights than the constitutions of the USA or Italy.

But how much is a piece of paper worth in Somalia, no matter how elegantly-worded? Given the current situation, not much.

For a start, there’s still that little problem of Al-Shabaab. The Islamist militant group is on the back foot, but by no means defeated. They are still safely ensconced in their seaside capital of Kismayo, and their influence extends across much of southern Somalia. African Union troops that have been responsible for pushing them out of Mogadishu and other strongholds promise they’ll be smashed by the end of August, but even if Al-Shabaab are pushed out of Kismayo it will remain a potent political force. Any constitution that is agreed before a political, as opposed to military, settlement with Al-Shabaab is reached is unlikely to provide the foundations of a unified nation.

Then there are Somalia’s other fractures, most notably Somaliland, which operates completely independently, but also autonomous regions like Puntland and Galmadug. Puntland adopted its own new constitution in April, while Galmadug has just elected a president. Somaliland, meanwhile, has made it perfectly clear it wants nothing to do with any Somali state, future or present. Is this constitution meant to apply to these regions as well? Of course it is?the Transitional Federal Government’s consistent position has been that there is just one Somalia, and they govern it. This has been supported by the international community. But how can they be expected to accept a document in which they had little to no say?

Yes, we all know that Somalia is a failed state. We know it needs fixing, and a constitution is an important part of that process. But it’s a process, and some things have to happen before other things like constitution-drafting are possible. Somehow concluding the civil war with Al-Shabaab would be a good place to start. Starting meaningful discussions with Somaliland over their joint or separate futures is also necessary?don’t forget that Somaliland is the only Somali territory to have enjoyed meaningful peace, stability and development over the last two decades.

It would also be helpful if the government could guarantee the security of the capital of this new Somali state. Even though Mogadishu is overrun with African troops and private security contractors, it’s not a safe city. During the constitutional deliberations, a prominent radio comedian was shot and killed by unidentified assailants. He was well-known, however, for poking fun at Al-Shabaab militants. And Wednesday, as the text was being accepted, two huge blasts disrupted proceedings; two suicide bombers had blown themselves up at the gates of the venue, killing themselves and one security guard.

With so much work still to be done, it seems like Somalia’s new constitution is an exercise in futility; and, by its unrepresentative nature, likely to harden divisions rather than encourage the reconciliation so necessary for Somalia’s future. DM

Photo: Delegates to the Somali National Constituent Assembly raise their hands during the conference in capital Mogadishu August 1, 2012. Somali security forces shot dead a would-be suicide bomber who tried to attack the venue of a national conference on a draft constitution, while a second attacker blew himself up, injuring six officers, police said on Wednesday. REUTERS/Ismail Taxta