Annan to step down as international Syria mediator 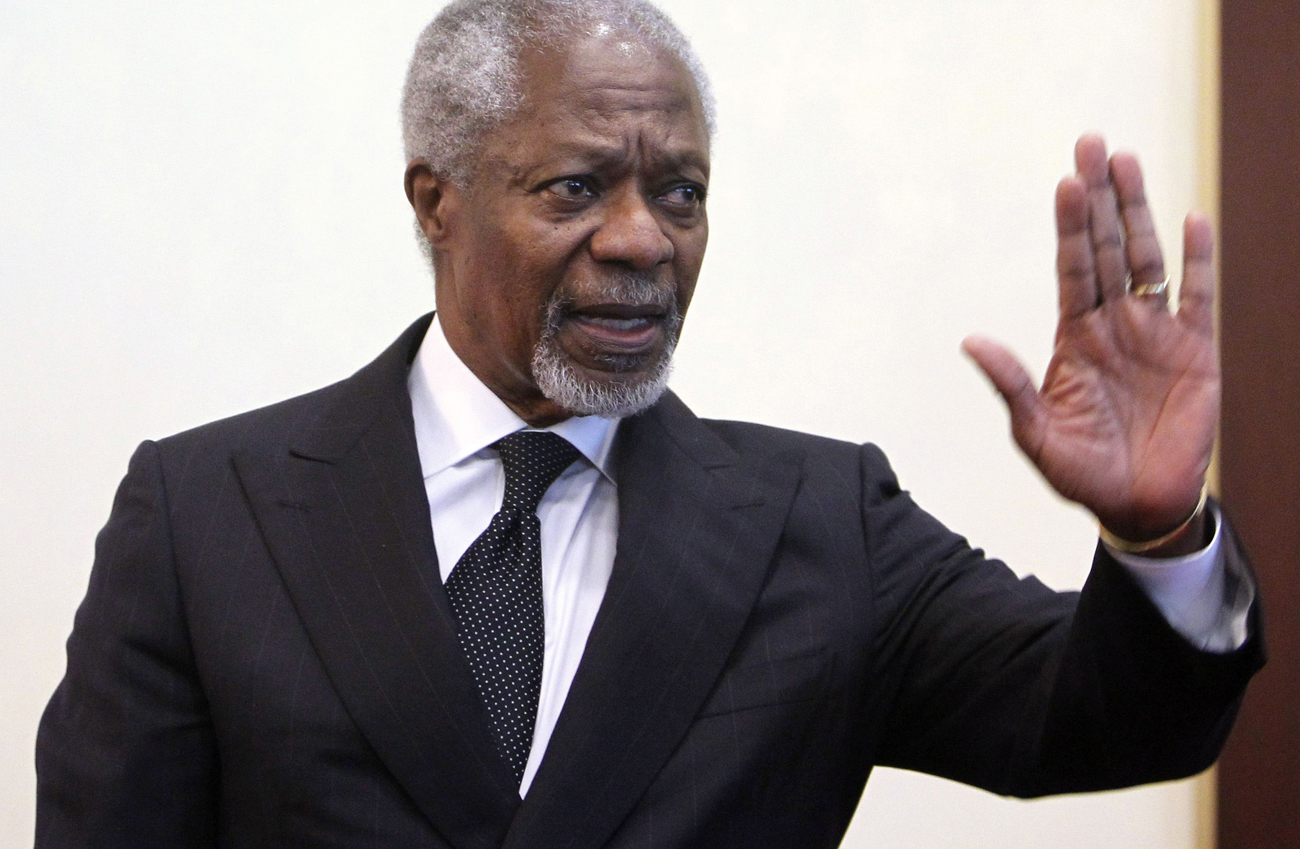 Former U.N. Secretary-General Kofi Annan is stepping down as the U.N.-Arab League mediator in the 17-month-old Syria conflict at the end of the month, the United Nations said on Thursday, the latest sign that the outlook for a diplomatic solution is bleak.

“Mr. Annan has informed me, and the Secretary-General of the League of Arab States, Mr. Nabil Elaraby, of his intention not to renew his mandate when it expires on 31 August 2012,” Ban said in a statement, adding that he and Elaraby were in discussions on appointing a successor to Annan.

“Kofi Annan deserves our profound admiration for the selfless way in which he has put his formidable skills and prestige to this most difficult and potentially thankless of assignments,” Ban said.

Russian U.N. Ambassador Vitaly Churkin was quick to react, suggesting to reporters outside the Security Council in New York that Moscow was disappointed that Annan was bowing out.

“We understand that it’s his decision,” Churkin told reporters. “We regret that he chose to do so. We have supported very strongly Kofi Annan’s efforts. He has another month to go, and I hope this month is going to be used as effectively as possible under these very difficult circumstances.”

Churkin added he was encouraged that Ban was looking for a successor to Annan.

Speaking to reporters in Geneva, Annan cited “finger-pointing and name-calling” in the 15-nation Security Council as one of the reasons for his decision to step down.

“The world is full of crazy people like me. So don’t be surprised if Secretary General Ban Ki-moon can find someone who can do a better job than me,” Annan said when asked about a possible successor.

“There may be other plans, other approaches that may work quite effectively,” he said, adding that at this stage the focus should still be on a political transition which means “President (Bashar) al-Assad will have to leave sooner or later.”

Annan suggested that continued arming of all sides in the conflict and the Security Council deadlock had undermined his ability to pursue a diplomatic solution to the conflict.

“The increasing militarization on the ground and the clear lack of unity in the Security Council, have fundamentally changed the circumstances for the effective exercise of my role,” Annan said.

Council diplomats have said privately that the United States and Gulf Arab states have become increasingly frustrated in recent weeks with what they saw as Annan’s dogged commitment to diplomacy at a time when they believe all avenues for dialogue with Syrian President Bashar al-Assad have been exhausted.

Western diplomats, however, blame Russia and China for vetoing three council resolutions intended to ratchet up the pressure on Assad to stop his attacks on civilians and halt the fighting, which has escalated into a full-scale civil war. DM