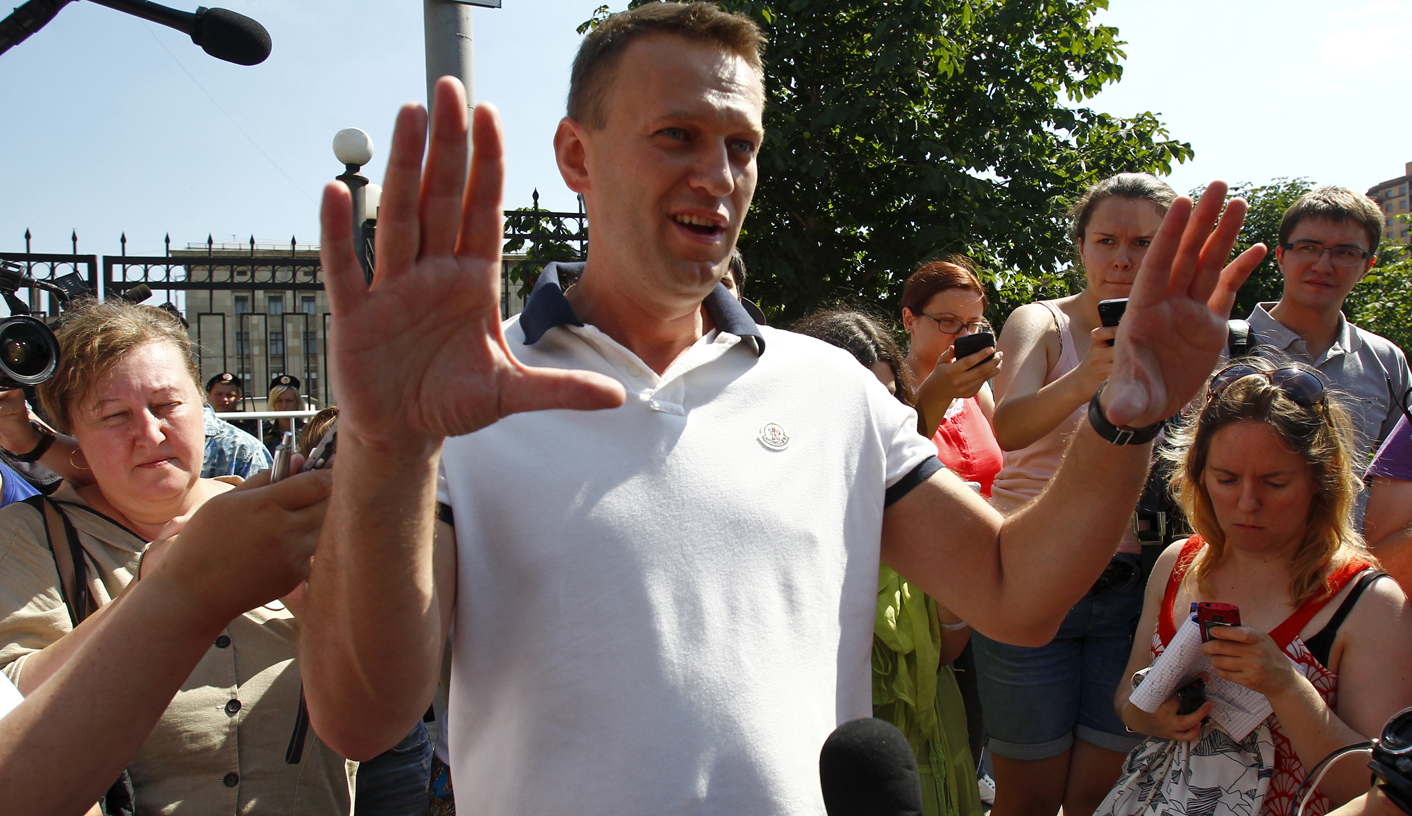 Russian opposition leader Alexei Navalny was charged with theft on Tuesday and could face up to 10 years in jail in what Kremlin critics say is a growing crackdown on dissent by President Vladimir Putin. By Nastassia Astrasheuskaya and Steve Gutterman

Navalny, an anti-corruption blogger who organised street protests that have dented Putin’s authority, dismissed the charge as absurd and other opposition leaders accused Putin of using KGB-style tactics to try to silence his critics.

The most charismatic of the protest leaders and potentially the biggest threat to Putin, Navalny also was barred from leaving the country in the latest of a series of moves against Putin’s opponents since he began his six-year term as president in May.

Russia’s federal Investigative Committee said Navalny, 36, had been accused of helping organise a plan to steal timber from a state firm called KirovLes, causing the government of the Kirov region to lose more than 16 million roubles ($497,000). The charges relate to 2009, when Navalny was advising the region’s governor.

“This is really quite absurd and very strange,” Navalny said as he left the Investigative Committee headquarters, where he was summoned to hear what he had expected to be a less severe charge over a case that was opened in 2010 but had been dormant.

“I will continue to do what I have been doing, and in this sense nothing changes for me,” he said. “We believe that what is happening now is illegal. We will use the methods of legal defence at our disposal. What else can we do?”

The charges, in a country where few believe in the independence of the judiciary, signalled a toughening of the Kremlin’s stance against its opponents.

“I understand that they are putting people who are troublesome for them behind bars. On one hand, I’m glad I am enough of a problem that they fear me, but it brings me no happiness to understand that they will lock me up sooner or later,” Navalny told Dozhd online broadcaster in an interview.

He said he believed some decisions in politically motivated cases were being made by “Putin himself.”

Putin, an ex-KGB spy, has in the last few weeks pushed through a law raising fines for protesters, tightened controls of the Internet – often used to organise protests – and imposed tougher rules on foreign-funded campaign and lobby groups.

Some protest organisers’ homes have been raided and some demonstrators arrested over a rally that turned violent on May 6. However, the protest leaders have not so far faced long jail sentences, which could backfire against the Kremlin by rallying support for the opposition.

In Washington, U.S. State Department spokesman Patrick Ventrell said the United States was troubled by the charges against Navalny, those against a punk rock band, and investigations of some of the May 6 protesters.

“All of these developments raise serious concerns about the politically motivated prosecutions of the Russian opposition and pressure on those who express dissenting views,” he said.

Navalny, a lawyer, is one of the few people regarded as capable of becoming a viable leader of the fractious opposition, although critics say he has nationalist tendencies.

He gained prominence by fighting corruption at state-controlled companies and used the Internet to do so, appealing to a tech-savvy generation of urban Russians.

Before a parliamentary election in December he helped to energise a struggling opposition, popularising a phrase referring to the ruling United Russia party, then headed by Putin, as the “party of swindlers and thieves.”

He was also among the leaders of protests prompted by fraud allegations in the election on behalf of United Russia.

“This case has been fabricated from beginning to end,” said Boris Nemtsov, a prominent Putin opponent. “The true reason for what is happening is Putin’s mortal fear of losing power … He is wildly afraid of the opposition, including Navalny.”

Billionaire businessman Alexander Lebedev, a shareholder in Aeroflot who nominated Navalny to the board of the state-controlled Russian airline, described the case as “completely ridiculous” and likened it to tactics used against Soviet dissidents during the Cold War era.

Putin was elected president on March 4 despite the largest protests since the start of his 12-year rule, during which he has served as president for eight years and as premier for four.

At times attendance at the rallies reached more than 100,000, witnesses said, although they have become less frequent since Putin was re-elected.

Putin, 59, signed a law on Monday toughening punishment for defamation and another on Tuesday that opponents say could be used to censor the Internet. He also said on Tuesday that people have the right to protest but warned that the authorities would act swiftly if demonstrators violated the law.

“They should act within the law. If they attack the police, throw stones at them, such actions without any doubt should be stopped, and stopped in their early stages,” he said at a youth camp on a lake north of Moscow, warning against riots breaking out as happened in London last year.

Putin also repeated assertions he made during his election campaign that some demonstrations were managed from abroad.

Police outnumbered small groups of protesters who gathered in central Moscow on Tuesday evening to protest against what they say are severe restrictions on Russians’ constitutional right to free assembly. Police said 25 people were detained.

Similar protests, held on the last day of every month that has 31 days, have led to dozens of detentions in the past.

In a case which critics say will indicate how Putin plans to treat opponents during his new term, three women from the punk band “Pussy Riot” went on trial on Monday over an unsanctioned protest performance at the altar of Russia’s main cathedral, where they called on the Virgin Mary to “throw Putin out!”

After an initial session lasting nearly 12 hours, the defendants said they were being deprived of food and sleep.

“The court must create the conditions necessary for the sides to carry out their procedural responsibilities. You are violating these rights,” Maria Alyokhina told the judge from the courtroom cage where the women are confined during proceedings.

“We’re not sleeping, we’re not eating,” she said.

Alyokhina and her bandmates face up to seven years in jail over a protest they say was aimed against the close relationship between Putin and the Russian Orthodox Church. DM