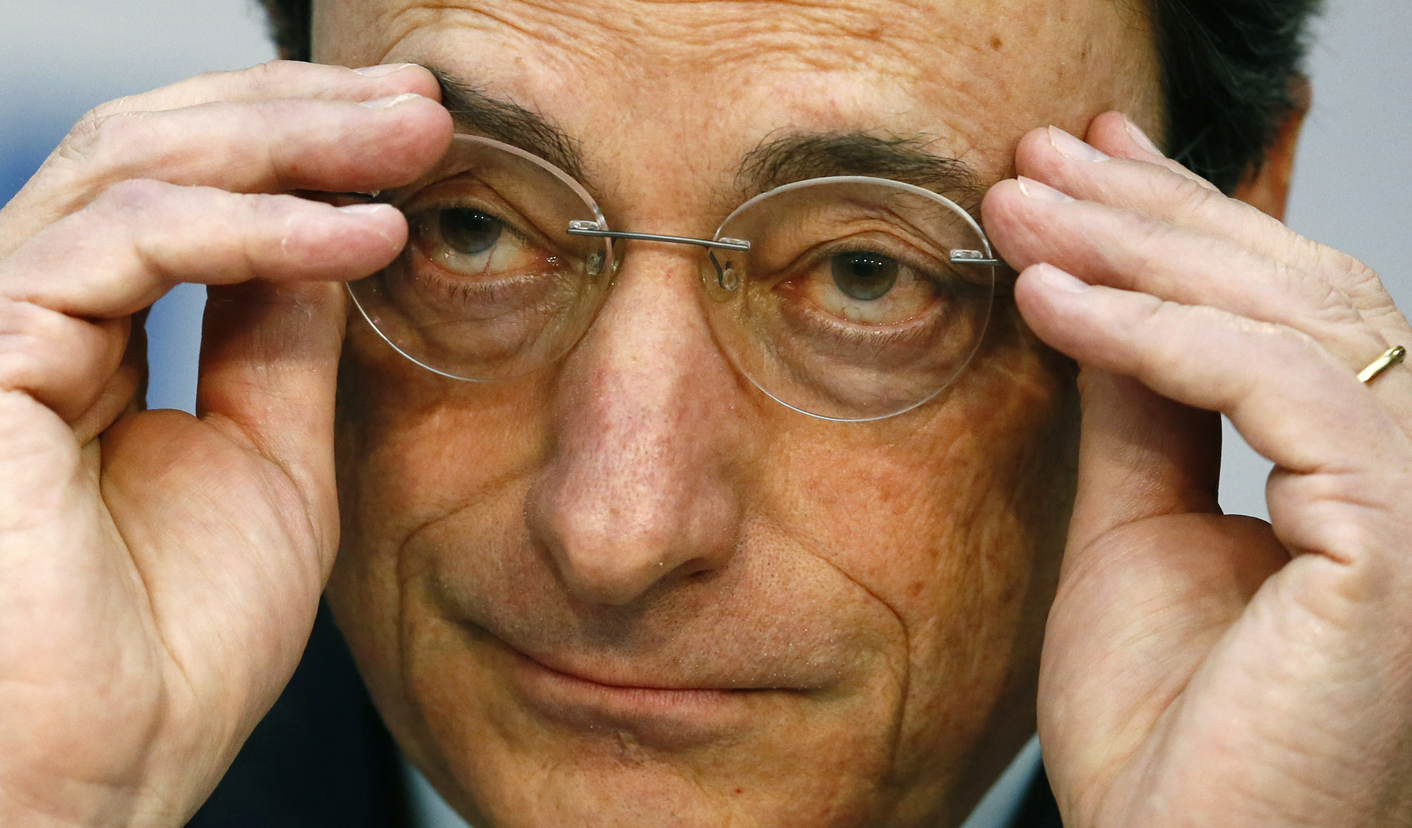 European Central Bank President Mario Draghi pledged on Thursday to do whatever was necessary to protect the euro zone from collapse, sending a strong signal that inflated Spanish and Italian borrowing costs were in his sights. By David Milliken and Marius Zaharia.

Fears about the euro zone’s future are intensifying with Spain and Italy facing frenzied pressure on financial markets and Greece holding crunch meetings with its international lenders having failed to keep its repair plans on track, raising fresh questions about its place in the currency bloc.

With the need for urgent action becoming increasingly apparent, the ECB appears to be gearing up to flex its muscles, something Madrid and Rome have been seeking for months.

“Within our mandate, the ECB is ready to do whatever it takes to preserve the euro. And believe me, it will be enough,” Draghi told an investment conference in London to mark the beginning of the Olympics.

“To the extent that the size of the sovereign premia (borrowing costs) hamper the functioning of the monetary policy transmission channels, they come within our mandate,” he said.

The ECB has cut interest rates to record lows and offered banks unlimited liquidity without any meaningful boost to the euro zone economy or bank lending resulting.

The comments are Draghi’s boldest to date and suggest the central bank is ready to defend Italy and Spain whose borrowing costs have hit unsustainable levels.

Winding up his remarks to an audience of business leaders, he said: “I think I will stop here. I think my assessment was candid and frank enough.”

The euro jumped above $1.23 for the first time in two weeks after his remarks, Spanish and Italian bond yields fell sharply and the index of leading European shares jumped more than two percent.

After defending Italy last year, the ECB has kept its sovereign bond-buying programme mothballed for months. Internal opposition to reviving it is stiff so focus will turn to what else the ECB could do following Draghi’s remarks.

Economists think despite the reservations it could be forced to buy bonds again, or support struggling euro zone countries via the back door.

On Wednesday, ECB policymaker Ewald Nowotny broke ranks with his colleagues, saying that giving Europe’s permanent rescue fund a banking licence so that it could drawn on central bank funds had merits. Draghi and others have previously rejected that option.

Alternatively, the bank could act as the Federal Reserve and Bank of England have, and opt for straight quantitative easing — money-printing by another name.

“The comments about high government bond yields disrupting ECB monetary policy transmission are interesting, in so far as they hint at a possible attempt to circumvent the restrictions on outright government bond purchases,” said Marc Ostwald, Strategist at Monument Securities.

“Of course it remains to be see whether Herr Weidmann, Herr Asmussen, Frau Merkel and Herr Schaeuble would agree with his assessment,” he said, referring to the senior members of the German government and its representatives at the ECB.

French Finance Minister Pierre Moscovici said Draghi’s remarks on government bond yields were “very positive”, adding that the euro zone should also not ignore the option to use its EFSF bailout fund to buy bonds.

The IMF also gave its approval. “Draghi’s remarks are a welcome reiteration of the ECB’s well-known commitment to do what is necessary,” a spokesman for the fund told a news briefing.

The ECB rode to the rescue at a previous moment of acute stress in December, launching a programme that eventually created more than 1 trillion euros of three-year liquidity for the currency area’s cash-strapped banks. That bought three months of market calm which now seems a distant memory.

Its members have been steadily upping their rhetoric in recent weeks as delays in getting the euro zone’s bailout fund up and running and Spanish banks recapitalised has pushed the euro zone crisis back to boiling point.

Euro zone powerhouse Germany was put on a rating downgrade warning this week along with fellow AAA members the Netherlands and Luxembourg.

Draghi said at the weekend that the ECB had “no taboos” over what it could or could not do. His fears about the failing transmission of record low interest rates and uber-cheap loans into the real economy chime with similar warnings from Bank of France head Christian Noyer.

Draghi’s remarks “suggest that he has either convinced the German members of the ECB that it is time to intervene verbally, and if necessary follow through with actual intervention, or he is willing to risk a showdown knowing that a vast majority of the Council will support him,” said Riccardo Barbieri, chief European economist at Mizuho International.

A crucial issue for the euro zone is that its bailout fund would not be able to cope with supporting a country as large as Spain or Italy without a major injection of firepower. In the absence of that, the ECB is the only line of defence.

Draghi stressed that the ECB did not want to do things that should be done by governments. He refused to speculate on the chance of a country leaving the euro but said that the single currency was “irreversible”.

“Our job is to maintain price stability in the medium-term. Our job is to cope with financial fragmentation, when it falls within our mandate,” he added. DM