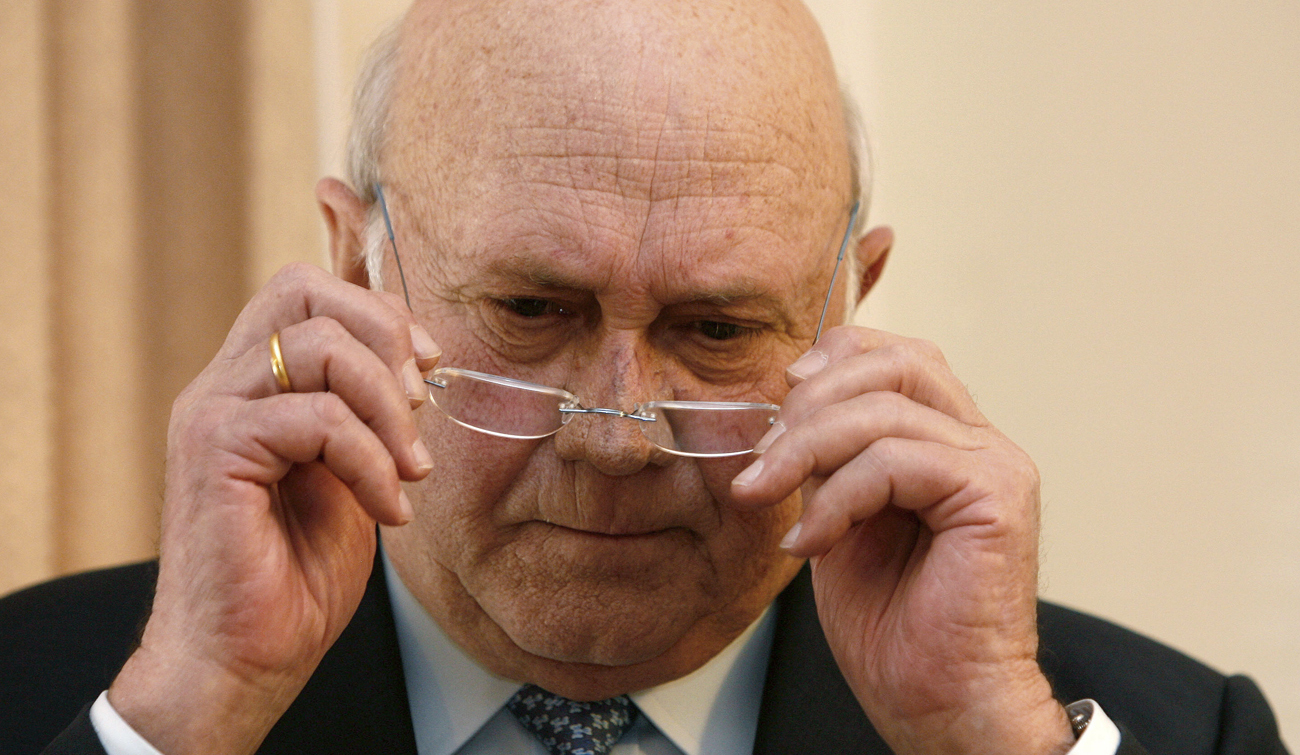 The hypocrisy of an apartheid leader standing as moral guardian over South Africa, pointing out the flaws of the ANC government, seems to escape ex-president FW De Klerk. He wants to be viewed through the prism of the Damascene conversion he has conjured – the one that transformed him from apartheid’s last flag-bearer to the returning messiah who will save South Africa, again. By RANJENI MUNUSAMY

It is quite evident that FW De Klerk is desperately seeking a special place in South African history and that the indulgence of being a Nobel laureate alongside Nelson Mandela is not good enough for Apartheid’s last leader.

The former South African president appears to harbour the grand illusion that not only will he be recorded as the great white liberator who brought democracy and freedom when he unbanned the liberation organisations and freed Mandela in February 1990, but who also, in his golden years, became the voice of reason and gallant champion against kleptocratic black rule.

It is the only explanation for his penchant to stand in moral judgment over the ANC government, now as a reinvented “apolitical” commentator who occasionally imparts his wisdom and wealth of experience at governing South Africa. At a press briefing after a conference on ANC policy organised by his foundation, De Klerk said: “I am still suppressing it (the urge to get politically involved)”.

De Klerk also said white men were being blamed unfairly by the ANC and its alliance for problems like unemployment, poverty and inequality. The ANC was using racism as a “smokescreen” to hide their failures in management and governance, he said, using the Limpopo textbook crisis as an example.

“The fact that the president blames this on the presidency of (Hendrik) Verwoerd is unacceptable, it is strictly a management issue. It did not derive from apartheid – it is inexcusable,” he said.

“The national democratic revolution wants to transform us into a communist state. This is dangerous. Communism has been proved to fail,” De Klerk said, in relation to a debate on the “second phase of the transition” at the ANC’s recent policy conference.

All this, together with comments De Klerk made in an interview with CNN earlier this year, in which he defended the Bantustan policies that created homelands, is exposing the former president’s subliminal conviction that apartheid was really not that bad, and there would be virtue in cultivating forms of neo-apartheid. It is also shaping him as the defender of white rights and privilege – in ensemble with the likes of Afriforum and Solidarity.

It is why Democratic Alliance leader Helen Zille, who spoke at the De Klerk foundation conference, best be careful about riding the FW wave if she wants to continue projecting her party as a home for all races with growing support in the black middle class and amongst the unemployed. De Klerk has no traction whatsoever in these constituencies and he can only draw on the blacks-are-corrupt brigade.

It must be so frustrating for De Klerk that the apartheid-was-better-than-this lobby can’t constitute itself into an organised formation that sings his praises every time the ANC’s weaknesses and failings are exposed. After all, he is the most renowned living representative of the apartheid government who now, at every opportunity, seeks to revise the record of an oppressive system that constituted a crime against humanity.

De Klerk has become an historical revisionist par excellence, not only politically but in his private life too. His single most shocking act to conservative white South Africa was not the release of Mandela, since political change and democratic reform was inevitable, but his scandalous affair with the wife of National Party funder, Greek shipping tycoon Tony Georgiades. The poster boy for traditional family values shook his constituency to the core with the salacious affair, divorce from the former first lady, Marike, and marriage to Elita Georgiades.

De Klerk’s final insult to Marike, who was later murdered, was to censor a chapter from her autobiography in which she wrote of her heartbreak and pain as a result of the affair. Even though this was a personal account of the trauma and humiliation of losing her husband, De Klerk would not allow publication of his ex-wife’s anguish because this would interfere with the righteous public image he would rather reflect.

This conduct is consistent with De Klerk’s preference of how history records his political life. In De Klerk’s version of history, he was the sentinel leading the verligtes (enlightened ones) throughout his career in politics, from when he became a parliamentarian in 1969 through his succession of seven ministerial posts in the apartheid government.

In fact, De Klerk would rather the historical record start in 1989 when he became head of the National Party in February and then state president in September, when PW Botha had a stroke. This is because his record in Cabinet does not really support his preferred version of history as a modifier and advocate for reform.

The grand irony of De Klerk’s comments this week that he would fire basic education minister Angie Motshekga over the Limpopo textbook crisis was that he was a former education minister in the apartheid government, one who ensured that black people received an inferior education – with no textbooks whatsoever.

One of the highlights of De Klerk’s memorable time as education minister was the nationwide protests in 1983, when his department forced through a law empowering the state to impose racial quotas at universities to limit the ratio of black students to whites, with subsidy cuts if the universities did not comply. State subsidies at the time accounted for between 50 and 80% of total university income and De Klerk had the heady power to reduce funding to any university that he felt had failed to comply with the racial quotas.

Then, in 1987, De Klerk went further to use state subsidies to hold universities to ransom in order to crack down on anti-apartheid activists and to compel institutions to report incidents of “misconduct” to him. The nationwide demonstrations against this blatant attempt of political control marked the biggest academic protest in the country’s history.

Therefore, for De Klerk to stand in judgement over the education system, which was undeniably ruined by the legacy of apartheid, is so hypocritical that it beggars belief. He does so in the hope that his audience was either ignorant of his own dastardly education policies or that his supposed good deeds outweigh his shameful past.

Of course, De Klerk did his damndest to expunge the public record of his political past in much the same way he did in regard to his private life. The Truth and Reconciliation Commission was a process for both those in the apartheid government and the liberation movement to account for wrongdoings and to allow forgiveness and healing.

De Klerk undermined the TRC process by refusing to acknowledge the crimes of the apartheid governments in which he served, and then, in an act of sheer contempt for those who suffered under repression, he forced the commission to block out parts of its final report that showed his complicity in apartheid-era crimes.

In his memoir The Last Trek: A New Beginning, De Klerk writes about the “undeniable progress” many blacks made under apartheid and praised the “sincere efforts” apartheid governments made to “improve their circumstances”. It is sentiments like these that uncover his Damascene conversion as a farce because it is clear De Klerk has never accepted that apartheid was a moral aberration and fundamentally unjust.

He exposed this in the CNN interview when he said he could only say in “a qualified way” that apartheid had been morally wrong. It is comments like these which increasingly make people believe that De Klerk did not deserve his Nobel Peace Prize because there was no genuine conversion and that it should be withdrawn.

Perhaps the biggest irony is that his co-recipient of the prize, and the person closest to the saintly figure De Klerk aspires to be, exposed his hypocrisy even before they received the award “for their work for the peaceful termination of the apartheid regime, and for laying the foundations for a new democratic South Africa”.

In an unscheduled, off-the-cuff speech during the multiparty Codesa talks negotiating the transition to democracy, Mandela lashed out at De Klerk for accusing the ANC of reneging on promises to suspend the armed struggle while the state was complicit in stoking political violence.

“He has sometimes very little idea what democracy means,” Mandela said of De Klerk. “He can’t talk to us in that manner. Even the head of an illegal, discredited, minority government has certain moral standards to uphold.”

It rings as true now as it did then. DM

Lockdown: Many ‘trapped in their home with their abuser’

The workers who make love possible

Healthcare workers speak out about life during lockdown