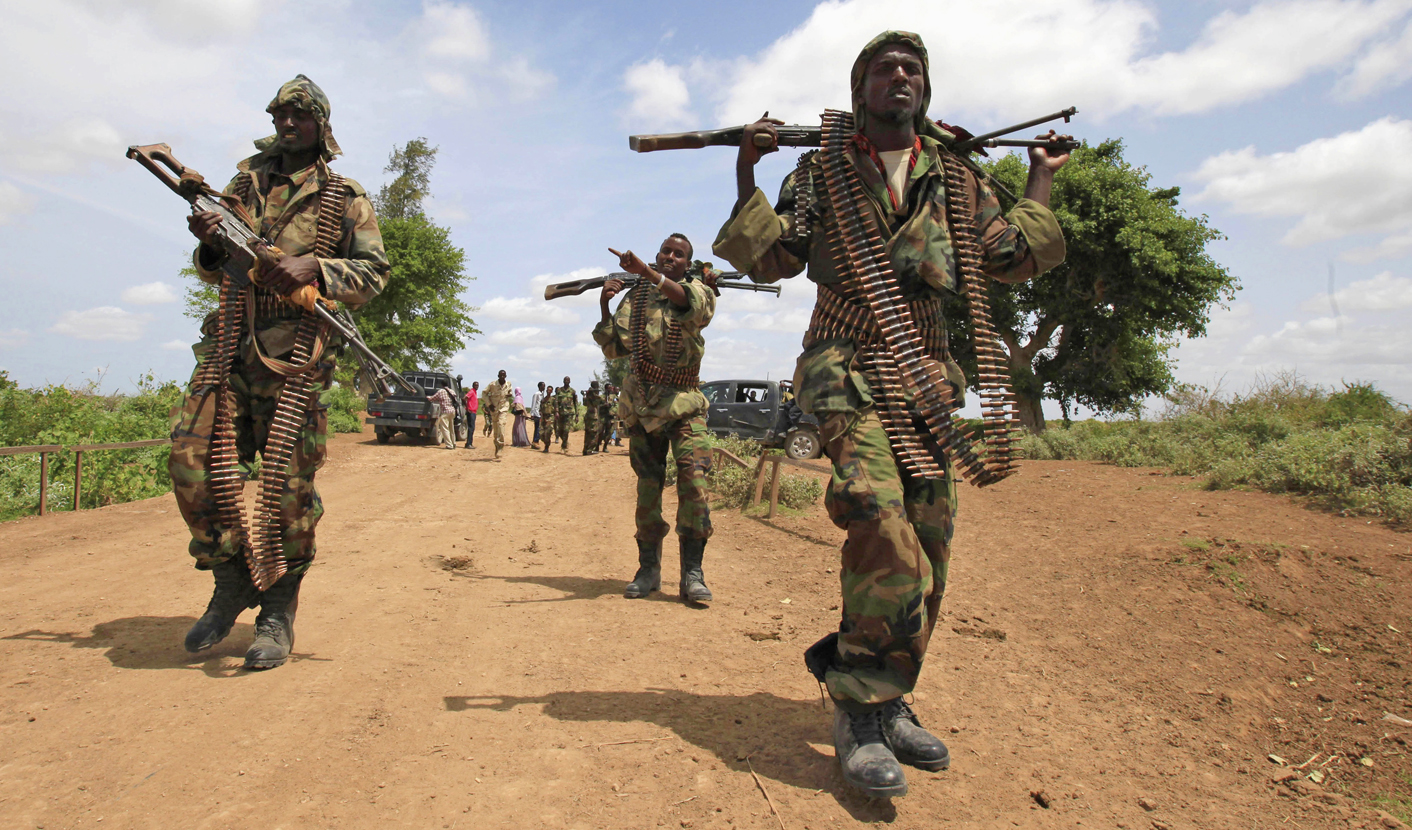 The United Nations Sanctions Committee has met twice in the past week to discuss the reports of the Somalia/Eritrea Monitoring Group. So far little has been resolved about how exactly the recommendations of the Monitoring Group are set to be enforced, if at all. But while South Africa haggled with the Security Council about how best to deal with private security companies in Somalia, KHADIJA PATEL found out more about South African security firms and government’s attempts to deal with them.

The United Nations Monitoring Group on Somalia and Eritrea has this year highlighted the problematic role played by private security companies (PSCs) in Somalia, both in providing assistance to “non-statutory” forces in the semi-autonomous Puntland region, as well as flooding Mogadishu with hefty men hauling around big guns.

The Monitoring Group’s recent, leaked report alleges that the South African government has been either unwilling, or unable stop the direct or indirect supply, sale or transfer of weapons and military equipment, as well as the direct or indirect supply of technical assistance or training, financial or other assistance by South African PSCs working in Somalia. More interestingly, the South African government was found not to have co-operated with the Monitoring Group’s investigation, by ignoring various inquiries for further information.

This is not the first time the South African government has failed to co-operate with such an investigation. In April this year, the Mail & Guardian reported that the government failed to respond to questions posed by the United Nations relating to claims that South African mercenaries and security companies aided the Gaddafi regime during the Libyan uprising.

“In January, the three-member panel, set up by the UN to probe human rights violations committed during the Libyan conflict, asked the government to provide clarity on the activity of South African mercenaries and security companies in that country,” the Mail & Guardian said, adding: “Allegations have been brought to the panel’s attention, from both news reports and other reliable sources, of the involvement of South African security firms, and South African nationals as mercenaries, in the attempts to extricate listed individuals, including Muammar Gaddafi and members of his family to other countries.”

The government’s failure to respond has prompted accusations that South Africa is willfully shirking its responsibility to crack down on illicit mercenary activity, in violation of its own laws.

Security analysts, however, caution that instead of pointing to active meddling in the Somali conflict, the government’s failure to co-operate with these probes points rather to the great bulk of bureaucracy that impedes the government in just about every sector.

“It seems surprising to me that the government would intentionally block information like that, especially given our stance against private military and security companies,” said one African defence analyst to the Daily Maverick. “Depending on which ministry received the request, it could well be incompetence or bureaucratic red tape that blocked access to the information.”

“The reports of South Africans involved, in one way or another, in external conflicts and security arrangements paint a very bad picture of South Africa,” Sabelo Gumedze, a senior researcher in the Conflict Management and Peace building Division at the Institute of Security Studies in Pretoria, said in a report on the South African Defence Review that was undertaken by former Defence Minister Lindiwe Sisulu.

The Defence Review, published in April this year, acknowledges that non-state actors, including private military corporations and mercenaries, will play increasingly prominent roles in international conflicts. But what has not yet been ascertained is the particular role of South African guns-for-hire in international conflict, and how exactly their involvement will impact on South African foreign policy.

“In the last two decades, South Africa has been seen as a breeding ground for mercenaries and also supplied personnel to work in the lucrative business of international private military and security companies (PMSCs) that are involved in various parts of the world,” Gumedze says.

Gumedze, however, further notes that despite acknowledging the growing role of PSCs in international conflict zones, the Defence Review has failed to tackle comprehensively the issue of South African mercenaries. “For instance, it must be determined why South Africans are hired as mercenaries; why they are also recruited to work for external PMSCs; and why the international markets prefer their expertise. The answers to these pertinent questions would shed light on how South Africa should address these issues. The Review must also address the question of how the South African PSCs should be effectively regulated. There have been disturbing reports of PSCs and PMSCs operating in violation of South African laws both within and outside the country,” he says.

Gumedze notes that The Review encourages a distinction between mercenaries as individuals availing their military skills to foreign entities, and private security companies who provide collective military services. It is a distinction that even the Defence Review has failed to make absolutely clear, and the blurriness between the two is perhaps best demonstrated by investigating the activities of South African security firms and personnel in Somalia. The challenge, then, appears to lie in how exactly to allow South African PSCs to continue their work, while at the same discouraging them from peddling military services to the next basket case state on the continent.

One security analyst based in Somalia pointed out that not all PSC operations in the country were fingered by the Monitoring Group. PSCs in Somalia are crucial to the United Nations in offering on-board protection of ships from piracy, as well as military and police training for the United Nations’ AMISOM operation and the de facto government, the TFG. It is the land-based anti-piracy operations in Puntland that has been far more controversial.

He listed three primary PSCs operating in Mogadishu: Dynacorp, who provide logistical support in the Somali capital; Bancroft International, who provide training to TFG and AMISOM personnel, as well as assisting with community service delivery; and PAE, whose mandate he described as “unclear”.

“All three employ a lot of South African personnel, all three are sanctioned by the US, and their contracts are with the US. The UN and other Western countries fully endorse their involvement,” he said, adding, “There are also significant CIA, FBI, DIA facilities based in Mogadishu.”

There is just one land-based anti-piracy operation in the semi-autonomous Puntland State, but it is this particular operation that has received significant attention in the Monitoring Group report. The security analyst consulted by the Daily Maverick described the development of the operation as follows:

“It has evolved many times since 2001, through a number of different companies, with the Puntland government trying to find ways of externally funding of its security force.

“In 2001, a company called Hart Security received a contract from Puntland State to create a protection force for Puntland to protect itself against illegal fishing.

“In 2002, the contract was taken over by a company called Somcan, which wound up in 2005 because of a lack of Puntland government funding.

“In 2010, the Puntland government agreed to support a Blackwater land-based anti-piracy programme that was funded by the Dubai Emirate in the UAE. After US and UN complaints and pressure, the UAE changed companies to Saracen (a South African company).

“Again, after complaints by the US and UN, the programme was transferred by the UAE to a company called Sterling Corporate Services (which the Monitoring Group report shows is Saracen, just by another name. Sterling ran the programme (a 500-man militia) from 2011 to April 2012, until one of the Sterling managers was murdered by a number of the militia. It has since been suspended.

“The word is that the US has convinced the UAE to accept Bancroft as the new implementing PSC; and the programme will evolve from a punitive military operation to a soft alternative livelihoods development programme.”

According to the Monitoring Group report, “More than two years have elapsed since the first team of former South-African military personnel, including Lafras Luitingh, Nicolas ‘Nic’ Van Der Bergh, François ‘Frans’ Eugene Fourie, Lood Pepler and ‘Major’ Botes, landed in northeast Somalia to assist, train, equip, supervise and mentor security forces in Puntland in May 2010, in violation of the Somalia arms embargo.”  Of these men, Major Luitingh is reported to have been a member of the Apartheid-era South African Civil Cooperation Bureau (CCB) – an organisation tasked with three primary objectives: eliminate anti-apartheid activists throughout the world; destroy ANC facilities both inside and outside South Africa; and circumvent the UN-imposed arms embargo. Their expertise, then, was no longer wanted in a South Africa at peace – and it is perhaps the one downfall of South Africa’s story of a peaceful transition that the more sinister elements of the old regime were not addressed adequately.

And, as mentioned, the Monitoring Group report is not the first time South African mercenary activity in Somalia, particularly in Puntland, has been a talking point. Reports from both the New York Times and the Associated Press in January last year first detailed the South African link to the operation. But little was done to address the matter or indeed publicly address it.

Gumedze stresses that the South African government, in recognition of the growing incidence of South African mercenary activity, has already tried to enact further legislation to regulate these activities. He says, “The Private Security Industry Regulation Amendment Bill, which seeks to replace the Private Security Industry Regulation Act 56 of 2001, proposes that any person who, within the Republic, recruits, trains, hires out, sends or deploys any other person to provide a security service outside the Republic must, among other things, provide to the director of the Private Security Industry Regulatory Authority (PSIRA) on a monthly basis such information as may be prescribed regarding such recruitment, training, hiring out, sending or deployment within prescribed time limits.”

But is it enough? According to Gumedze, no.

“While it is commendable that South Africa has a regulatory regime that seeks to address privatisation of security and mercenary activities within and outside the country, the legal instruments (if they were to come into force) would not be sufficient,” Gumedze says. DM

Photo: Somali government soldiers patrol near the Shabelle river in Balad, in the north of capital Mogadishu, July 13, 2012. REUTERS/Omar Faruk