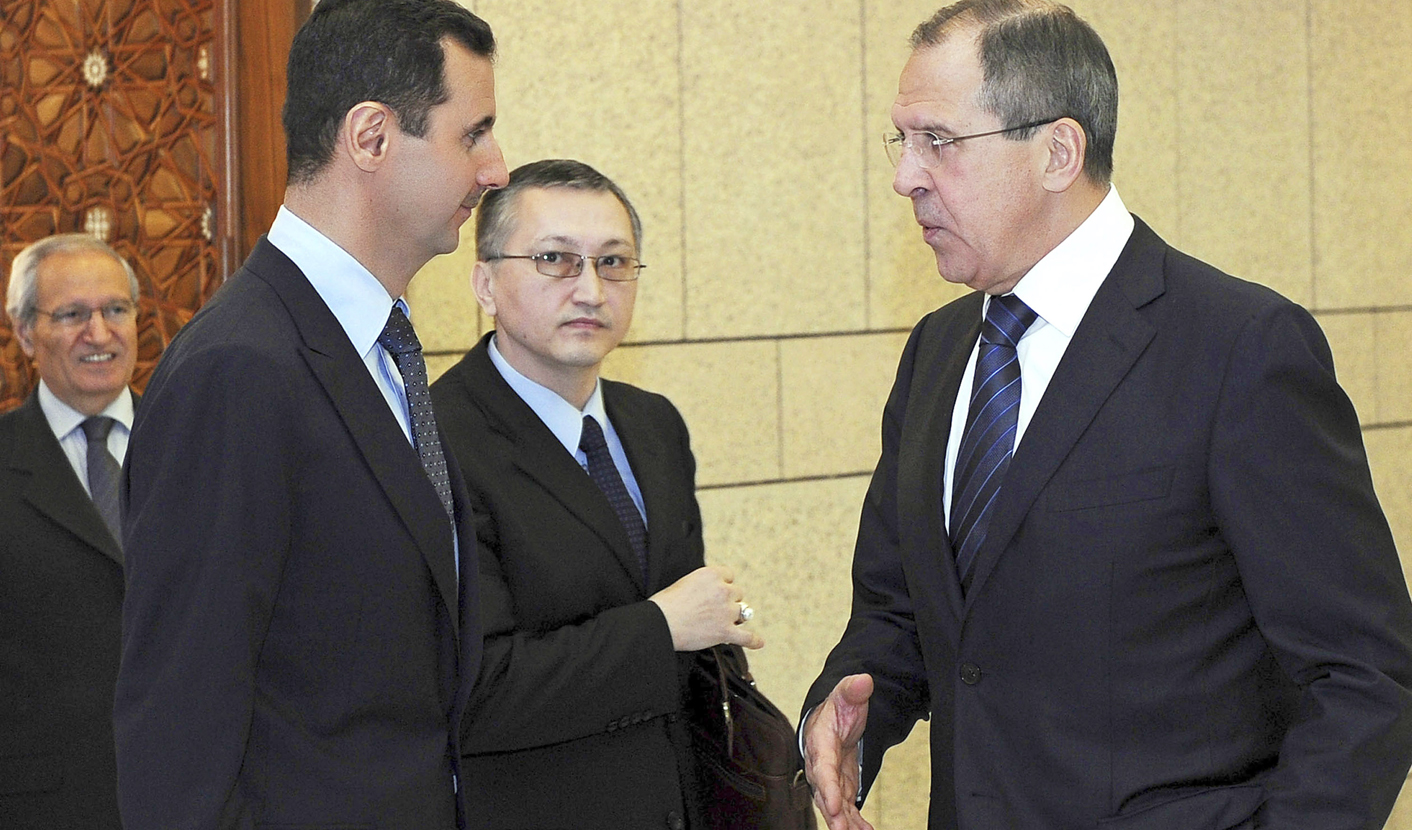 Increasingly under pressure by rebels intent on unseating him, Bashar al-Assad has considered using chemical weapons against his enemies but Washington and Moscow have formed an unlikely alliance to force him to abandon such plans. By Samia Nakhoul.

Analysts and diplomats across the region and beyond do not doubt that the Assad government, recoiling from a devastating attack on its security establishment last week and struggling to contain rebel offensives across Syria, is capable of using agents such as Sarin gas if its survival is at stake.

Yet some believe that the government’s unprecedented admission that it possesses a chemical stockpile – although in safe storage and only to be deployed against “external aggressors” – is an attempt to allay international alarm that might prompt outside intervention to secure the weapons.

“They have a keen instinct for regime survival and this is an issue which didn’t play well for them, which would really bring serious consequences, not the type of stuff we have been seeing so far from the international community,” said Salman al-Shaikh of the Brookings Doha centre.

“I think they wanted to move quickly to take us away from that, to reassure in many ways.

“This regime is capable of anything, but in this case it felt there may well be consequences, that they are perhaps crossing some red lines.”

There has been a barrage of warnings about Syria’s chemical arsenal this month, especially strident from the United States and Israel, but accompanied by firm but private advice from Russia, Assad’s main international ally, to put an end to speculation he might use it.

One Western diplomat in the region said: “There was talk of them using it two weeks ago, but the Russians intervened quickly to stop him.

“If you think how desperate these people are and what they have done in the past, you have to assume they would be prepared to use it. All of us think he (Assad) is capable of using it and will do it if he was pushed to the wall,” the diplomat said, referring to credible reports that Assad was preparing to use Sarin gas against Syrian rebels.

But “the Russians got hold of him and told him ‘don’t even think about it'”.

Moscow went further on Monday, publicly warning Assad not to use chemical weapons, which it said was barred by Syria’s 1968 ratification of an international protocol against using poison gas in war.

“The Russian side proceeds from the assumption that Syrian authorities will continue to strictly adhere to the undertaken international obligations,” it said.

Despite the diplomatic “debacle” over Syria at the UN Security Council, where Moscow has vetoed tougher action against Damascus, “there is a clear shared interest between Russia and the United States to control the chemical weapons”, he said.

“The Israelis are pretty serious about trying to stop it happening, and the Americans too,” the envoy said.

Diplomats said the United States, Israel and Western powers were in close contact on how to deal with the nightmarish eventuality of Assad losing control and his chemical weapons falling into the hands of militant groups – al-Qaeda style Sunni Jihadi insurgents or Assad’s pro-Iranian Shi’ite Lebanese fighters from Hezbollah.

Some Western intelligence sources suggested that Hezbollah and Iran’s Revolutionary Guards, both close allies of Syria, have sent some special units to back Assad in his fight against Sunni insurgents and might get hold of the chemical weapons in the case of a total collapse of government authority.

Hezbollah, backed by Syria and Iran, has tried to distance itself publicly from the Syrian quagmire but it believes a defeat for Syria would mean the group might be targeted next.

Asked whether Hezbollah would try to obtain Syria’s chemical weapons, one diplomat said: “If you think of this as a fight to the death, either with Sunnis or Israelis or both, you’d have an interest in trying to get your hands on chemical weapons.

“It’s one more deterrent against Israel and a big stick to wave,” he said.

President Barack Obama said on Monday that Assad would be held accountable if he made the “tragic mistake” of using his chemical weapons.

Washington said it was keeping a close eye on Syria’s chemical stockpiles and was “actively consulting with Syria’s neighbours and friends to underscore their common concern about the security of these weapons, and the Syrian government’s obligation to secure them”.

For the Kremlin, revelations about the chemical arsenal will add to its fears about how chaos in Syria could pose risks to Russia, but will not prompt a shift in Moscow’s stance on a crisis that is poisoning its relations with Arabs and the West.

For President Vladimir Putin, making the point that foreign interference is unacceptable trumps other concerns when it comes to Syria.

But Dmitry Trenin, director of the Carnegie Moscow Center, suggested Russia was working with the United States and other countries to try to safeguard chemical weapons or at least is discussing it, although the Kremlin probably believes the concerns are overblown.

“I think Russia is working with everyone, with America first of all … Putin met the Turkish prime minister, he was in Israel, and is in constant contact with the Americans. Of course, nobody wants chemical weapons to be used, let alone to get into the hands of terrorists”.

Since Putin announced in September that he intended to return to the presidency this year, Russia has vetoed three resolutions designed to step up pressure on Assad, angering Western and Arab states that say Moscow is protecting a brutal regime.

That contention will only be compounded by Syria’s acknowledgement on Monday that it has chemical and biological weapons and warning that it could use them if foreign countries intervened.

Damascus has not signed a 1992 convention that bans chemical weapons, but officials had in the past denied it had any.

It has officially stated that while it supports a Middle East-wide ban on weapons of mass destruction (WMD), it cannot unilaterally renounce chemical arms as long as Israel continues to pose a threat to its security.

Syria began to acquire the ability to develop and produce chemical weapons agents in 1973, including mustard gas and sarin, and possibly also VX nerve agent.

The Global Security website, which collects published intelligence reports and other data, says there are four suspected chemical weapons sites in Syria: north of Damascus, near Homs, in Hama, and near the Mediterranean port of Latakia.

Analysts have also identified the town of Cerin, on the coast, as a possible producer of biological weapons. Several other sites are monitored by foreign intelligence agencies and are listed only as suspect. Weapons Syria produces include the nerve agents VX, sarin and tabun, the website said.

Exact volumes of weapons in the Syrian stockpile are not known. However, the CIA has estimated that Syria possesses several hundred litres of chemical weapons and produces hundreds of tonnes of agents annually.

David Friedman, WMD expert at Tel Aviv University’s Institute for National Security Studies, said “for weaponisation, the material is poured into warheads, which can be anything from ballistic missiles to standard artillery shells to air-dropped munitions. The weapons can be as small as mortar bombs. Some of Syria’s chemical weapons are already in launch-ready, warhead form”.

Abdelbasset Seida, head of the Syrian National Council opposition group, said: “A regime that massacres children and rapes women could use these types of weapons.”

There are many scenarios under which Assad could fall but the worst-case scenario envisages a chaotic and messy downfall with militants and rebels seizing chemical arsenals.

While observers say the use of chemical weapons by the Assad government cannot be excluded, they believe it is not imminent.

“We cannot rule it out but we are probably some ways away from that scenario,” a diplomat said.

But another diplomat said Assad’s acknowledgment that he has nonconventional weapons was an “act of desperation by a regime on its last breath, behaving like a wounded animal who would use anything to fight back”. DM