AIDS-free generation: sure, but who’s paying? 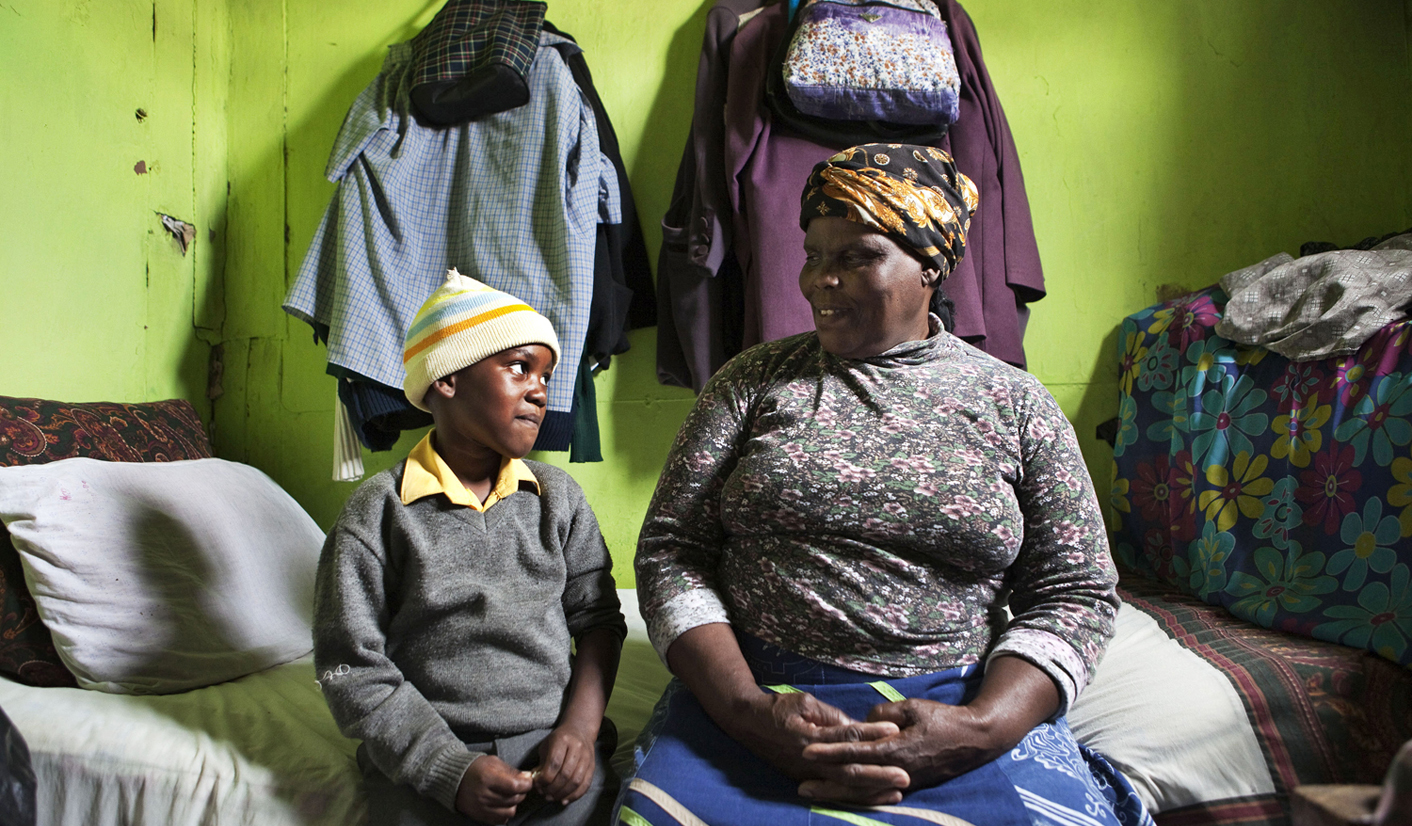 At the UN International AIDS Conference currently underway in Washington DC, South Africa has received plaudits for making great strides in its response to the HIV-AIDS crisis. But analysts warn that this might be as good as it gets – there still much to do to achieve an AIDS-free generation, yet the money to make it happen is drying up fast. By KHADIJA PATEL.

The current global discourse on AIDS is striking a much more upbeat tone than that we’ve become accustomed to in the past. For the first time, there appears to be real hope.

“The United States is committed, and will remain committed, to achieving an AIDS-free generation. We will not back off; we will not back down,” US Secretary of State Hillary Clinton told the International AIDS Conference in Washington on Monday.

Her optimism is not unfounded: Michel Sidibé, executive director of the Joint United Nations Programme on HIV/AIDS (UNAids), said in his opening address that for the first time, more people (eight million of 15 million) are on treatment than those who still need it. The trajectory of infections has taken a worldwide decline of 20% since 2001, and in 22 countries, the rate of HIV infections among young people has fallen by more than 25% in 10 years. Worldwide, far fewer children are being born with HIV.

Even in South Africa, where analysts warn the epidemic is yet to reach its half-life – meaning it can be expected to affect the lives of at least two more generations – there is some good news.

Last Thursday, health minister Dr Aaron Motsoaledi revealed that an estimated 104,000 babies out of 117,000 (89%) were saved from HIV infection in 2010. In 2011, a further 3,000 babies were saved, bringing the total to 91%. This, the minister said, was according to research done by the Medical Research Council and Centres for Disease Control and Infection on the effectiveness of mother-to-child transmission programmes, and involved babies aged four to six weeks.

“This is one of the most momentous public health achievements in history,” says Rebecca Hodes, a medical historian at the Institute for the Humanities in Africa at the University of Cape Town. She does advise caution, however, adding: “I want to join the chorus of triumph, but I also want to exercise some reserve.”

Hodes believes that too much triumph and self-congratulation in South African discussions of AIDS would ignore how much more could still be done. “It’s all fine and well for Motsoaledi to say infections in children are down, but it is not enough,” she says.

Hodes believes the current system for allocating antiretroviral treatment to mothers is an improvement on the previous policy. The current policy sees mothers receive antiretroviral treatment if their CD4 count – a determinant of how well the immune system works in a person diagnosed with HIV – is less than 350 cells per cubic millimetre, while the previous policy saw antiretroviral drugs provided only if the count was less than 250. Either way, however, Hodes believes the situation is far from ideal. “We should be treating everyone that is (HIV) positive,” she says.

“If we treat people earlier, we are preventing infection more effectively.”

Motsoaledi, however, is still pleased with the progress that has been made. “It has proven that putting mothers and infants on treatment early on really works,” he told reporters.

By 2015, South Africa is expected to increase the current 1,7-million people on treatment to two million. “This is a huge challenge … no country on earth has the numbers we do,” Motsoaledi said.

He’s not wrong there. To put it in perspective, China, with a population 30 times that of South Africa, has only 160,000 people on ARV treatment.

Hodes insists that an HIV-free generation is more than a pipedream in South Africa. “We can really solve HIV now, but it takes some ambition and great commitment,” she says.

But where exactly is the funding for such an ambitious programme going to come from? South Africa has so far done well, with statistics showing that the country funds 80% of its mammoth AIDS programme itself – quadrupling its investment in the five years between 2006 and 2011. Yet as global donor funds dwindle, a big concern is that South Africa, as a middle-income country, will no longer qualify for PEPFAR – the American fund launched by George W. Bush.

Marielle Bemelmans, a Health Policy and Advocacy Advisor for Médecins Sans Frontières, agrees that South Africa has made great strides in its response to HIV and AIDS, particularly in self-funding. Nonetheless, she urges caution against growing expectations of African states to find their own domestic solutions to the HIV emergency. “South Africa is a very good example,” she says. “It is a success story for self-funding, but it is difficult to compare South Africa to other countries in southern Africa.

“Other countries in southern Africa may have similar rates of the incidence of HIV and AIDS, but South Africa is a medium-income country while other states in the region are all lower-income,” she points out.

A new report by UNAids shows that domestic funding for HIV has exceeded international investments. The report, “Together we will end AIDS”, reveals that low- and middle- income countries invested US$ 8.6 billion in the HIV response in 2011, an increase of 11% over 2010. International funding, however, remained flat at 2008 levels (US$ 8.2 billion).

Bemelmans further warns that as well as “flatlining”, donor funds in some instances have actually been reduced, leading to adverse policy changes.

“In the last few years, the flatlining and reduction of donor funds have forced states to revisit their policies against international recommendations,” she says.

“It would be outrageous to assume that African states could combat this emergency alone, given their current limited resources,” Dr Eric Goemaere, MSF’s HIV/AIDS senior regional advisor for southern Africa, said in a statement released by the group. “This is just a cynical excuse for donors to scale back on their earlier commitments of putting an end to this disease. It will have catastrophic consequences for patients.”

Bemelmans says it is difficult to predict who exactly will be most affected by dwindling donor funds, but points out that a recent funding gap in Zimbabwe left 80,000 people without treatment – a figure that currently stands at 60,000. “Donors pulling out and not fulfilling their promises puts a strain on resources in these countries,” she says. “Another consequence of a lack of funding is a debate on who exactly is most deserving of the medication available.

“Sustainable financing for the response to HIV must come from a partnership between global and domestic investments,” Bemelmans adds.

To further expand country ownership and support mutual accountability, the African Union has launched a document entitled “Roadmap for shared responsibility and global solidarity for AIDS, tuberculosis and malaria in Africa”, ahead of the conference in Washington DC.

According to UNAids, the document “charts a course for more diversified, balanced and sustainable financing for the AIDS response by 2015, and demonstrates Africa’s new leadership and voice in the global AIDS architecture.”

Yet despite this possibility for Africans to assert themselves more prominently against the crisis, AIDS is a problem that requires many more resources than Africa actually has. The global financial crisis has forced traditional donors to reassess their contributions to the cause. And though gains are being made with the current resources available, the reality is that existing efforts and resources are insufficient to bring AIDS under control in low- and middle-income countries. Furthermore, it is necessary to drive a fundamental shift in the AIDS response – from crisis management towards a sustained strategic response.

As the world’s population grows, too, so the number of sexually active people grows – and with that, susceptibility to HIV infection grows higher still. Access to treatment has significantly increased, yes, but what are the long-term plans to sustain the growing demand for treatment? DM

Photo: Thenjiwe Madzinga, 66, sits with her grandson Thina Gxotelwa in the small room they share in a shack in Cape Town’s Khayelitsha township, February 23, 2010. Madzinga cares for her five grandchildren, including four who were orphaned when Madzinga’s own daughter died from AIDS in 2002. REUTERS/Finbarr O’Reilly