Zuma on the airwaves: The sound of nothing, the meaning of silence 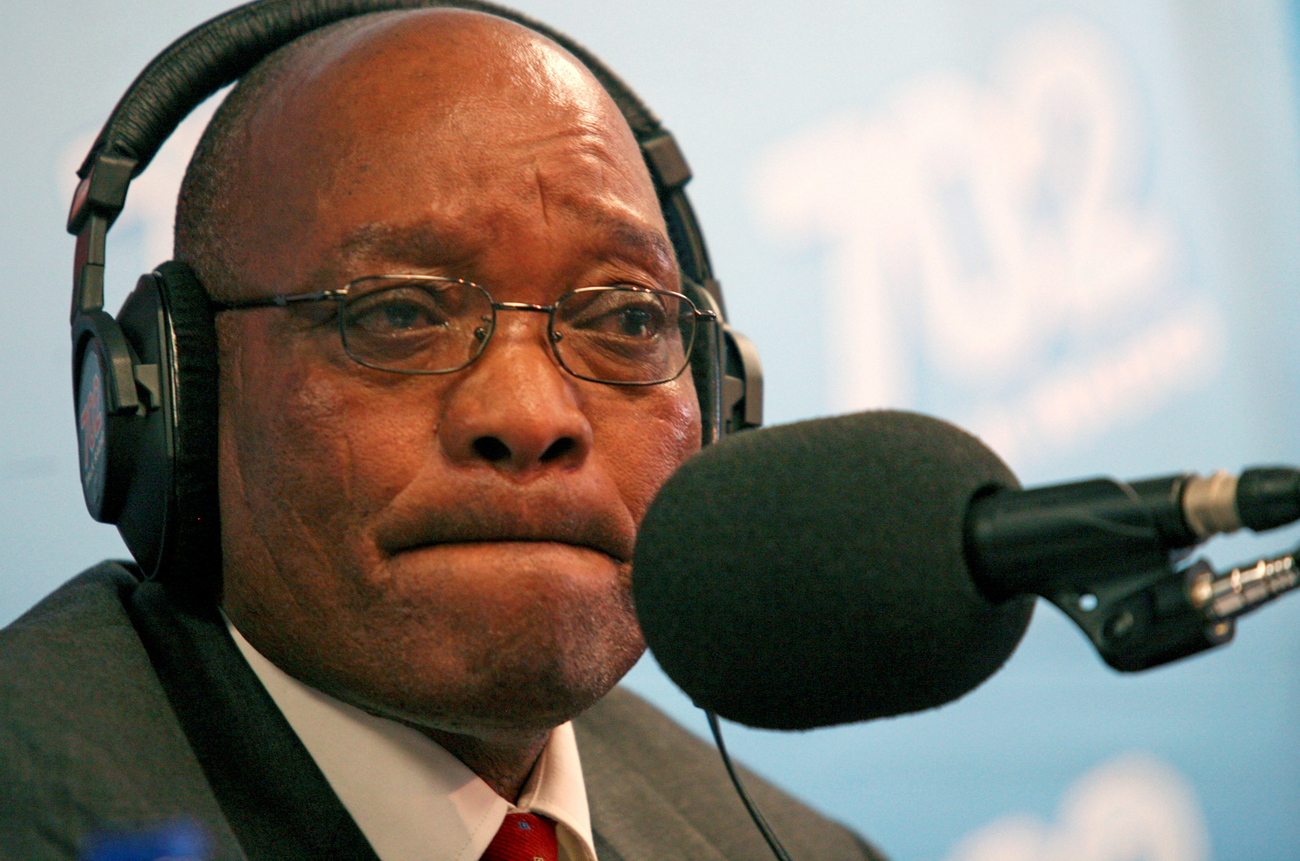 Whether it was government’s performance, corruption, the Limpopo textbooks fiasco, the youth wage subsidy, the medical parole of Schabir Shaik and Jackie Selebi, the bad blood with Julius Malema and Winnie Madikizela-Mandela or the independence of the courts, President Jacob Zuma left South Africans no better enlightened after an hour-long radio interview than before he started speaking. By RANJENI MUNUSAMY.

When the presidency acceded to an interview with Talk Radio 702, surely there was some strategic thinking about what President Jacob Zuma would be communicating. It was to be an hour-long live interview broadcast simultaneously on 702 and its sister station, 567 Cape Talk. Zuma doesn’t do media interviews very often, particularly live broadcasts, and therefore there would have had to be some tactical planning.

There would be consideration given to the timing of the interview and the burning issues on the national agenda. As this was an independent radio station and the interviewer, Redi Tlhabi, was bound to focus on the running controversies, the president would have to be prepped with coherent responses and advised on how to handle the hot potatoes.

He would also need to have some positive messaging on tap to counter the current negative publicity. Besides, it’s five months till he is up for re-election; surely any PR opportunity should be used to full advantage.

Well, that’s what should have happened, in theory. Instead, Zuma arrived at the studio ready to wing it, with seemingly no plan whatsoever as to what he wanted to leave the nation thinking about.

The non-delivery of textbooks to schools in Limpopo and government’s hopeless response to this crisis was always going to be the centrepiece of the interview. Considering the shame around this debacle and the fact that education is meant to be an “apex priority” of the Zuma administration, this is one issue he should have been on top of.

The president should at least have been briefed on the status report of the textbook issue – we’re assuming there is such a thing, considering the enormity of the matter – as at 8am on Monday morning: were more textbooks delivered since the Metcalfe audit was conducted, how are the catch-up programmes progressing, is his task team advancing in the investigation?

When Zuma met basic education minister Angie Motshekga earlier this month to discuss the Limpopo textbook situation, a statement from the presidency said part of the problem with managing the issue was administrative gaps arising from the national government intervention in the Limpopo province. The presidency said a special protocol would be developed to manage relations between the spheres of government and ensure that service delivery was not affected. In Monday’s interview, Zuma could have provided new intelligence on this matter.

Such things would be low-hanging fruit for the president and give citizens the impression that he had a handle on the situation. Instead, he provided no new insight on the textbook fiasco than when he was interviewed a month ago by the SABC, and his answers went along the lines of “We don’t know who is responsible and we have to look into the matter”.

Despite Motshekga having apologised to Zuma over the delays in delivery of the textbooks, he is of the opinion that she cannot be held responsible for what happened. “You don’t know who’s responsible for that. You can’t say the minister, who is sitting in Pretoria in the office, is responsible,” he said, when asked by Tlhabi why he hadn’t fired Motshekga.

He said he also had to follow “due process” and the “rule of law” and couldn’t act against the minister based on allegations. The problems in the education system stemmed from the legacy of Apartheid, he said.

And that’s as coherent as it got.

On the performance of his administration, Zuma said he could not rate himself, though “I’ve tried my best”. On delivery backlogs, he said problems built over “3,000 years” couldn’t be solved “overnight, and that weaknesses in government capacity and ability to utilise funds effectively was being “looked at and tackled”.

Government viewed the matter of corruption seriously, he said. “In other countries, nobody talks about corruption – it’s a way of life. But here, we’re fighting it. We’ve got a media here that is active and exposing it, which is absolutely important.”

No examples were given, lest he tread on some politically connected toes, and no firm line threatening those who exploit the state for corrupt purposes was forthcoming. Again, low-hanging fruit.

A police officer called in to the show to ask the president what he planned to do about corruption in the police service. “We need to find a way to handle the matter,” Zuma said. He had discussed the issue with the minister of police and they didn’t yet know if the problem lay in the training of officers. But they wanted to find means to detect criminals in the police service. Essentially, the president was no better informed than the cop who called in – they were both looking for answers to the same question.

On perceived plans to place curbs on the judiciary, Zuma said: “No arm of government [can] be left alone”.

“Whether you talk about the legislature, the executive or the judiciary, these are three very vibrant arms of government. To say one is going to be left unattended to is incorrect,” he said.

What this means in effect is anyone’s guess.

When asked by Tlhabi about government’s relationship with labour and whether it was being dictated to on issues such as the youth wage subsidy, Zuma said the nature of democracy demanded that there should be open engagement on issues. “If it is said this would disadvantage workers, we can’t say ‘To hell with you’.”

From the waffle that ensued, it was difficult to tell whether the matter was now dead in the water or just on the backburner.

Another hot potato the presidency should have anticipated was the granting of medical parole to former police chief Jackie Selebi and the connection to Zuma’s former financial advisor Schabir Shaik. Zuma clearly did not have the facts around the Selebi case at his fingertips to justify the decision to release him. Despite the initial scepticism, there appears to be growing acceptance that the former commissioner is genuinely ill.

Even if he had simply repeated what Minister of Correctional Services S’bu Ndebele said on Friday when he made the announcement, Zuma would have sounded more informed, and taken ownership of the decisions of his government. Instead he said the medical conditions for parole were prescribed in the law and that “I can’t make a view on each and every prisoner paroled.”

Under heavy questioning from Tlhabi on the matter, Zuma retorted: “Well, I’m not a doctor.” The matter was closed with Zuma sounding riled – which need not have been the case, had he been on top of things.

When questioned on discipline in the ANC and the seemingly heavy-handed way the party dealt with the Julius Malema issue, the edge in Zuma’s voice became more evident. He denied that action was taken against Malema only after he had attacked him and that he had been allowed free reign to attack other senior leaders up till then. He also denied that the ANC applied double standards in disciplining its members and that he had previously compared Malema to former ANC president Oliver Tambo.

“Whatever Malema says, I do not think it will be fair to engage him… I have decided that Malema must do what he thinks is good for him… I think the ANC, not me, Jacob Zuma, has engaged him in a process…”

Similarly, when questioned on Winnie Madikizela-Mandela’s criticism of his polygamous lifestyle, he said he stayed away from discussing such issues. “I don’t think it is wise to discuss personal things.” When asked if his lifestyle choices had not been an “impediment” to his presidency, Zuma replied “Not at all”.

But apparently if the ANC told him it no longer wanted him to serve as party leader, he would “walk away”. He claimed he’d never had an “appetite” for being ANC leader or president of the country, but that did not mean he was “serving reluctantly.”

We’d hate to find out how he would communicate with the nation if he were. DM