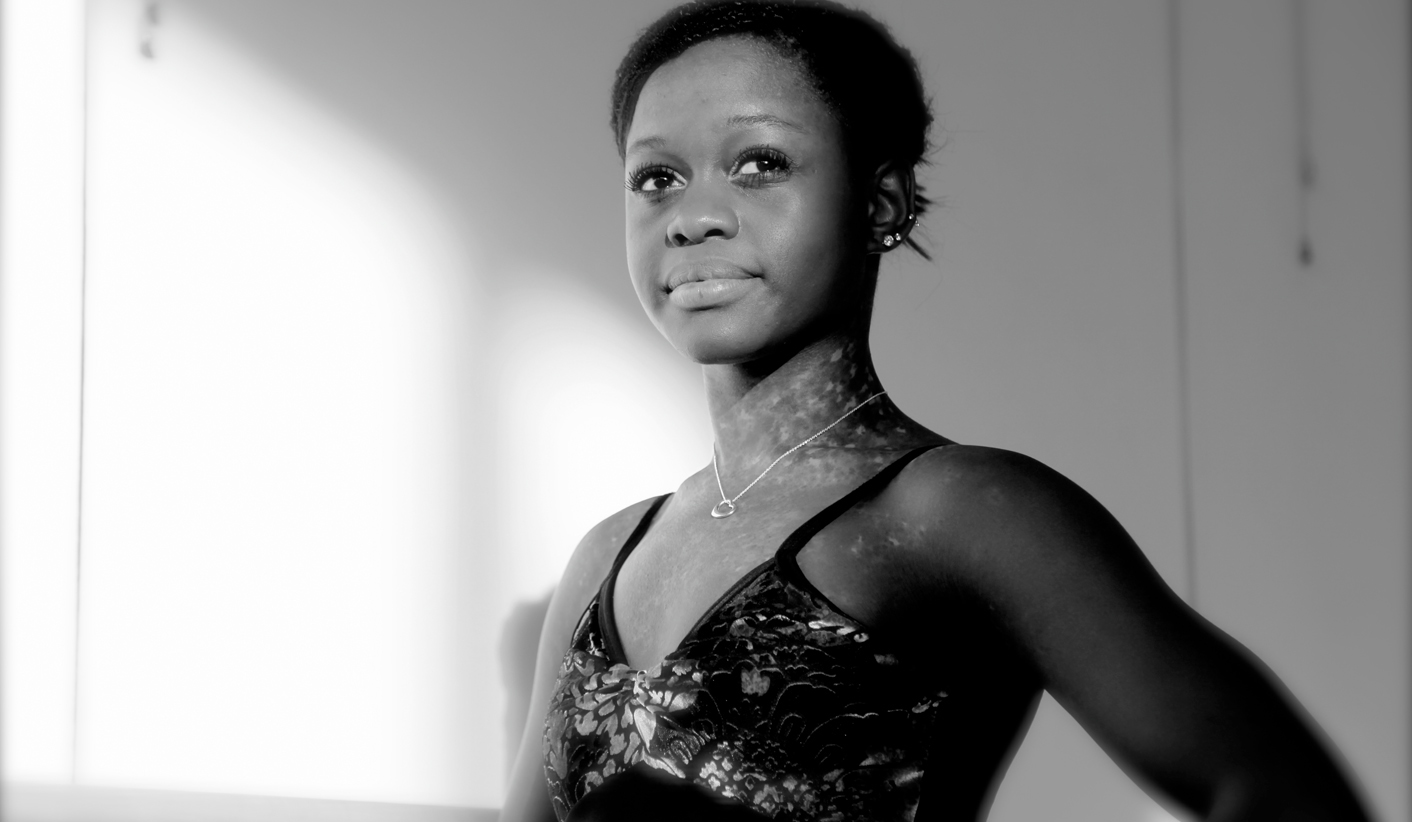 Michaela DePrince comes off the rehearsal dance floor at the South African Mzansi Ballet Theatre’s studios at the Joburg Theatre for a short break, and we have a chance for a chat. She’s seventeen and back in Africa for performances that began getting enormous attention, even before she danced a single step in front of an audience here. Here's why. By J BROOKS SPECTOR.

DePrince is already an emerging international ballet talent of note, and she is in Johannesburg to dance the part of Gulnare in the South Africa premiere of one of ballet’s great classics, Le Corsaire. This ballet features choreography by Angela Malan, after that of Marius Petipa, and it is based on a Byronic heroic poem.

Now, what were you doing at seventeen, eh? Still trying to figure out what you were going to begin studying, when you finally began studying? But DePrince is already being marked for potential greatness as a dancer.

DePrince’s story would already be noteworthy if she were just a very talented teenager on the cusp of fame in a notoriously precise, finicky yet supremely athletic art form where the competition is intense and the mind games are almost as important as the body’s exertions. The classic films The Red Shoes, The Turning Point – or a more recent, more troubling film, Black Swan, come to mind.

But DePrince is a young, talented black woman coming into her own in an art form that was – until fairly recently – seen as the natural preserve of white performers. The usual justifications were muttered beliefs that black bodies were just too big, too broad; too, err, well-rounded to meet the classic specifications of the perfect dancer shapes decreed by balletic tradition and aesthetic sensibilities. When all else failed as an argument, gatekeepers fell back on the final redoubt of a position that it just wouldn’t look right – all those ethereal white skins and… Better they should go into the other door and do the jazz, tap and modern dance stuff, anything but ballet – but more on that story in a moment.

But for DePrince’s personal saga, there is still more. Much more. There is an extraordinary back-story – or maybe it is actually the story. As a four year old, she was one of thousands of war orphans pushed back and forth as the flotsam and jetsam of a chaotic civil war in Sierra Leone. As a four-year-old, she had just barely been rescued and placed in an orphanage near the Sierra Leonean border. Recall the worst scenes from the film Blood Diamond, perhaps, to try to get an idea of what it must have been like.

Once she was safe in the orphanage, the staff told her a family would never adopt her because she was “the devil’s child”. Really. Imagine being told that – repeatedly – as a preschooler, after surviving that barbaric civil war. But the devil’s child? Because she suffered from that skin condition, vitiglio (you know, Michael Jackson’s skin condition), where there is a loss of brown pigment resulting in irregular white patches that continue to feel like normal skin. DePrince says, with an unnerving matter-of-factness, “This is something I don’t think you should tell a child.” For some reason, call it luck, an Olympian dice roll, whatever, as a child in that orphanage, she found a discarded magazine at the gate of her orphanage. On the cover of the magazine was a picture of a ballet dancer wearing a tiara, tutu and point shoes. Do you remember all this? she is asked. “It is very hard not to remember something like this,” she murmurs. Yes, of course. It is impossible not to conjure up the scene: The four-year-old DePrince studying the picture; what is this person doing, why are they doing it, what are they wearing?  “It was a picture of a ballerina, and seeing that dancer, and seeing it at such a terrible time of my life, it just completely gave me hope and I thought to myself: if I ever got adopted, maybe I could be just like this person.”

So she hid the magazine cover in her clothing and gave the rest of the magazine to the other children to distract them. She studied this picture and decided that whatever this woman was doing, she wanted to do it, would do this too, herself, when she got older. Then there was a secular deus ex machina. Americans adopted her, despite the premonitions of imminent devil’s child-dom, and she moves to the US, where she grew up amidst a boisterous family with sisters and nieces and – miraculously – she became a normal child with dreams – and the possibility she could achieve them.

It is like a Hollywood film. Wait a second now; it is a film by Bess Kargman, First Position, released in 2011, and now coming to South Africa. It follows six young dancers from around the world as they prepare for the Youth America Grand Prix, one of the world’s most prestigious ballet competitions. And one of the stars of the film is Michaela DePrince – still just sixteen years old at that point.

Watch: Michaela DePrince – featured in “First Position” while at The Rock School

Talking with her, she is so unaffected, so normal, it is scary. She describes starting dance classes in the Philadelphia area, up on point at seven, and being pushed upward into tougher, more advanced classes with other children three or four years older than she is. She was driven to learn this art. Along the way, she recalls being at a competition and classes in Holland a few years back where she says she was still “really bad”; she had “biscuits” she says – ballet lingo for really big, awkward feet. There is a grimace as she recalls her performances back then.

Despite the practice and her place in the ballet world, she says she really understands the need to get an outside life, to not just be a “bun head,” to grow up and get married, and do all the other things in life. But for now, whenever she is not dancing, taking dance classes or practising, she swims with her friends, gets out to the beach – and buys lots and lots of heels. She giggles and says she has about two hundred pairs of heels. And she lives on Facebook and Twitter when she is not working at her art.

We talk about American dance companies and she says she just loves the American Ballet Theatre and longs to dance with them professionally in the future. And then we talk about specific ballets – she loves being in Le Corsaire because you can be a flesh and blood character, just like one can in Don Quixote as well – although she also wants to dance Aurora in Sleeping Beauty and the twined white and black swans in Swan Lake. Les Sylvide is less attractive – you have to have a “mask” for a face.

We talk a bit about technique and she says she always wants to feel the floor when she dances. As a result, unlike many dancers, she doesn’t put fleece in her point shoes and there are no adhesive bandages in her shoes to get in the way of the sensations of dancing.

There is a wonderful irony in Michaela DePrince’s arrival in South Africa to dance here. That, of course, is aside from all the astonishing facts of her survival, perseverance, and success. Come autumn in America, DePrince will be joining the Dance Theatre of Harlem (DTH) company and school in New York City.

Now, this is not just any ballet company. This is the group that Arthur Mitchell – the African-American dancer who shattered the colour bar at the New York City Ballet, dancing an electrifying Puck in George Balanchine’s Midsummer Night’s Dream – founded as an act of faith and commitment to his community and art in the aftermath of the assassination of Martin Luther King, Jr., in 1968.

And it is also the company that came to South Africa to herald the end of South Africa’s cultural isolation as Apartheid collapsed. And this company just happened to dance on the same stage at the Joburg Theatre (then called the Civic), just two months shy of twenty years ago.

The head of the school and company, now, is South African dancer Laveen Naidu, who, back then, was a student at the DTH’s dance school in New York and who received his first professional opportunity to perform before a hometown audience as part of the DTH’s South Africa tour a generation ago. And now it is Michaela DePrince’s turn to perform here – and to follow into the DTH tradition of “dancing through barriers” as their South African tour was subtitled, back then.

And how was the premiere of Le Corsaire at a fundraising gala evening for the South African company? Definitely worth going back to see a second time. DM