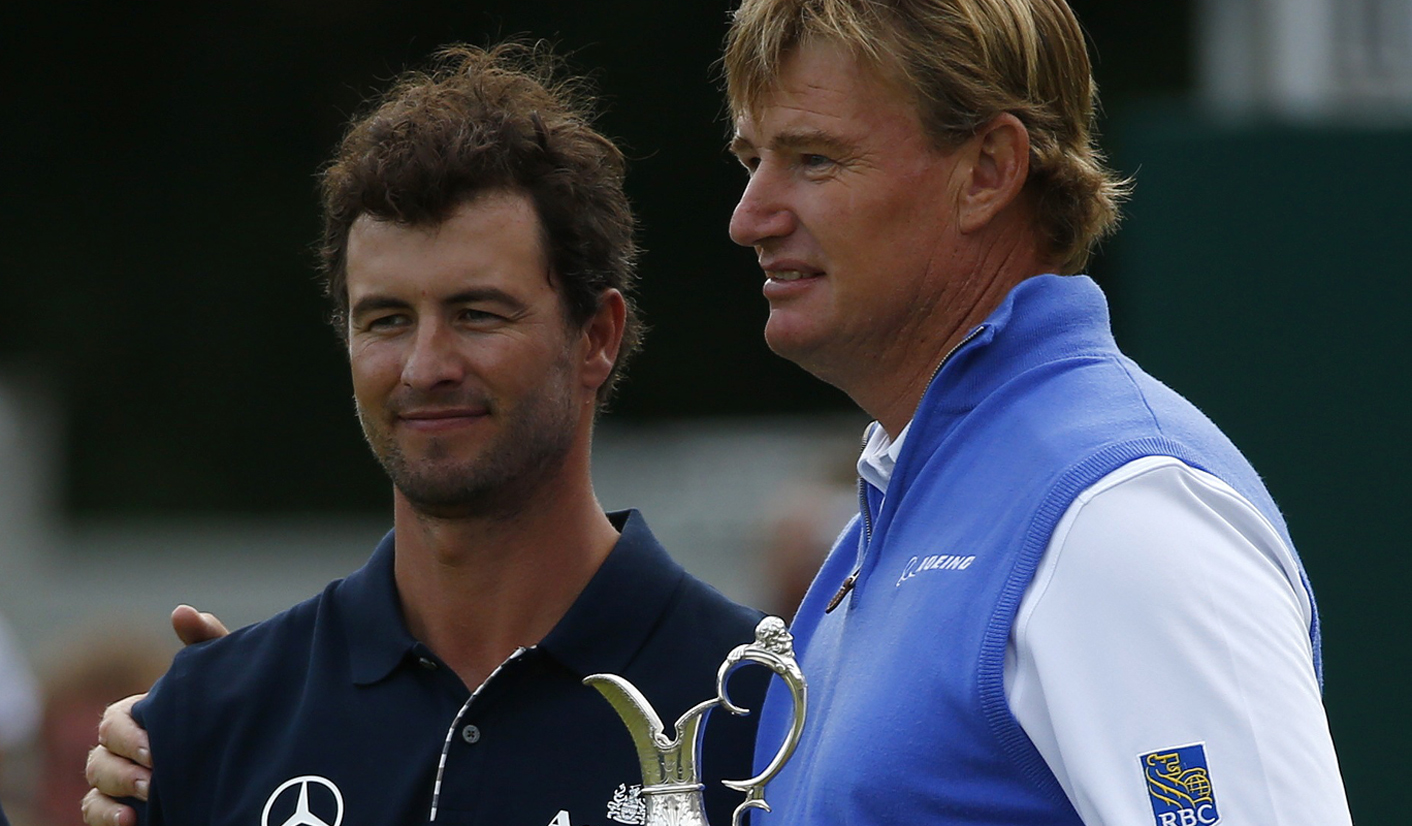 Most sports don’t accommodate comebacks at the age of 42, but golf is one of the few where the years of experience can outweigh the advantage of youth. And Ernie Els needed all his experience as he capped a return to form with a second British Open victory at Royal Lytham & St Annes with a one-stroke victory over Australian Adam Scott. By STYLI CHARALAMBOUS.

As anyone who has held a club in his hand can attest, golf can be the cruellest of sports. And so it proved on this overcast Sunday, as Adam Scott squandered a four-stroke lead going into the final round. The 32-year-old Australian had played superbly all week, leading after the opening round with a six under, signalling his intent to break his major trophy drought. The world number 13 had previously finished second to Charl Schwartzel at the 2011 US Masters, and with just five holes to go, and leading by four strokes over Els, he looked a sure bet to add one of the most coveted trophies to his already impressive collection.

But there is a reason British Open engravers wait until the very last moment before etching names onto the Claret Jug. Like many before him, Scott, who had shown a steely resolve to stay at or near the top of the leader board all week, was reduced to a bundle of nerves – and laser-like accuracy faded as quickly as his chances.

Scott, who began the day six strokes ahead of Els, had managed to keep the big, easy-swinging South African at an arms-length distance of four strokes before the wheels came off. Whilst Scott most certainly lost this title as opposed to Els winning it, we cannot take away from the courageous round Els constructed to be in contention after signing his card. The burly South African had to scramble on several holes to save par after an early bogey, but carded a 68 two under par to finish at seven under, whilst Scott played out his remaining holes. Els’ score included a pressure cooker birdie on the 18th from five meters out, which would only have added to the voices in Scott’s head as he teed up on the 17th.

With things all square and the final hole to play, Scott saw his poor tee shot land in the fairway bunker on the 18th, which meant he could do nothing more than chip out sideways and hope for a par to force the playoff with Els. Scott then played a magnificent approach to set up a makeable three-metre putt for par, only for the ball to roll centimetres wide and hand the South African his second British Open title and fourth major overall (to go along with his two US Open titles). He also becomes the 16th different major winner in as many tournaments, to highlight the diversity in golf now that Tiger Woods has released his grip on the majors.

“I am just numb at the moment; I feel for Adam Scott, he is a great friend of mine,” said Els, who picked up £900,000 in prize money. “We both wanted to win so badly, but I really feel for him. That is the nature of the beast. That is why we are out here.

“It was my time. I was hoping [for], at best, a play-off. A lot of people never thought I would win, but I started believing this year, getting a lot of help from my family and the professionals around me.”

Else also drew inspiration from his cricketing countrymen, who were dominating England in the first test match at the Oval at the same time he was competing at Royal Lytham & St Annes. “Yeah, I was watching a bit,” Els told reporters. “I watched a bit last night and then obviously this morning a little bit. It seems like the guys are fresh and ready to play and hopefully they’ll have a good series.”

Scott will know that he is not alone in final round major championship collapses, and will try to take comfort from Rory McIlroy’s 2011 Masters implosion, which was followed by his bouncing back to win the US Open later that year. But for now, the poor guy will have to deal with comparisons to Jean van der Velde’s 1999 brain freeze at Carnoustie and compatriot Greg Norman’s Masters meltdown in 1996, where he squandered a final round six-stroke lead to Nick Faldo.

For Ernie Els, this victory marked the culmination of a long road back to the top. His world ranking will climb to 15 from his current 40th place, after he at one stage dropped out of the top 100 altogether. His dip in form over the last few years was partly induced by injury, but mostly a loss of touch around the greens.

Having recovered from some serious knee and leg injuries, Els has been working with hand-eye coordination specialist Sheryl Calder and switched to a “belly putter”, both of which have transformed his putting and laid the foundations for this win.

With Els having finished ninth at last month’s US Open and already bagging a host of Top 10 PGA finishes, we can safely say the Big Easy is back and ready for more.  DM

Photo: Winner of the British Open golf championship, Ernie Els of South Africa, holds the Claret Jug as he stands with runner-up, Adam Scott of Australia (L), at Royal Lytham & St Annes, northern England July 22, 2012. “I feel for Adam Scott, he is a great friend of mine,” said Els. (REUTERS)