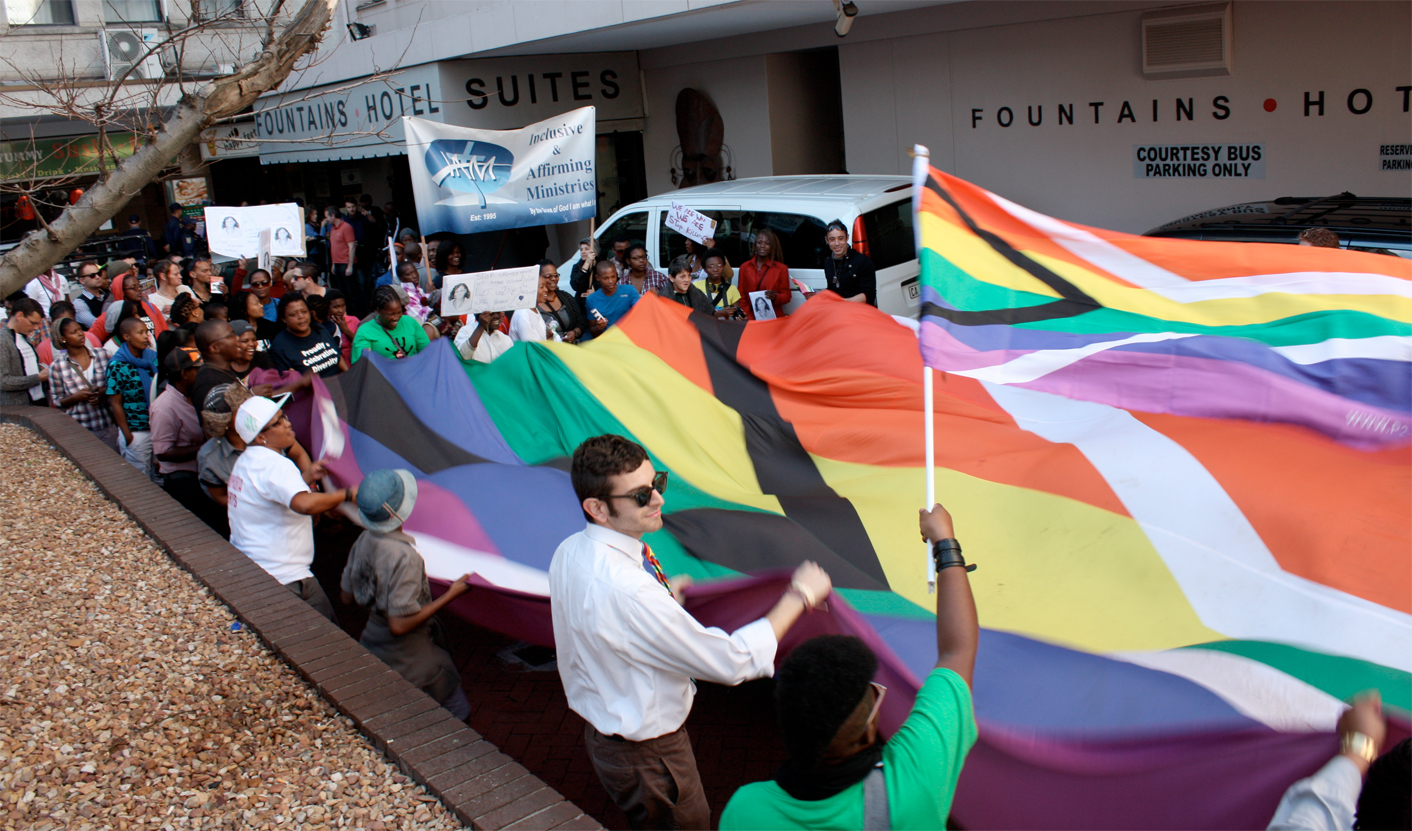 Wednesday 18 July was not just an occasion for celebrating Nelson Mandela’s birthday and performing 67 minutes of public service. In Johannesburg and Cape Town, members of the Lesbian, Gay, Bisexual, Transgender and Intersex community used the day to take to the streets to express their concern that Mandela’s legacy of peace and tolerance was not being experienced equally. By REBECCA DAVIS.

In Johannesburg, they marched on Luthuli House. In Cape Town, they descended on the ANC headquarters in Thibault Square. In both cities, the mood among participants of the colourful crowds was that of anger and frustration at what they saw as the failure of the ANC to provide decisive leadership on the problem of homophobic hate crimes.

Marchers from civil society organisations including The Gay Flag of South Africa, Free Gender and Luleki Sizwe joined concerned individuals to present the ANC offices in both cities with a memorandum. The choice of the day was not coincidental: it was selected to highlight the discrepancy between the values of the Constitution ushered in with Nelson Mandela and the perilous situation many members of the LGBTI community in South Africa currently face: what Human Rights Watch has called an “epidemic” of homophobic violence.

The particular object of the marches was to express outrage at the comments made by ANC MP and Contralesa President Patekile Holomisa in May, when he suggested that “the ANC knows that the great majority of South Africans do not want to promote or protect the rights of gays and lesbians.” In the aftermath of this statement, made to City Press, Holomisa claimed that he had been misinterpreted and that he was merely putting forward Contralesa’s view, rather than his own – a refutation which did nothing to allay the concerns of gay rights groups. Contralesa has since confirmed that its members would like to see a review of section nine of the Constitution, which outlaws discrimination on the basis of sexual orientation.

The ANC scrambled to distance itself from Holomisa’s comments, with ANC chief whip Mathole Motshekga putting out a statement noting Holomisa’s utterances “with great concern” and stressing that “the ANC caucus distances itself from these views and would like it noted that at no stage has it considered debating this issue before Parliament”.

The coalition of gay rights activists gathered on Mandela Day did not feel this gesture went far enough, however. In the memorandum delivered to ANC representatives at Luthuli House and Saraha House, they called for a greater assurance from the ANC that constitutional rights would not be tampered with and for a “clear message” to be sent out by President Jacob Zuma in the mould of Nelson Mandela, who “pioneered gay rights in South Africa’s Constitution on the counsel of respected persons such as late (gay and HIV-rights activist) Simon Nkoli”.

There were two further concerns highlighted by the gay rights organisations. The first was the conflict of interests inherent in the fact that Holomisa is permitted to chair the Constitutional Review Committee at the same time as serving as president of a group that wishes to amend the Constitution (Contralesa). The second is the fact that “the ANC emerged from its policy conference silent on LGBTI issues”. They point out that there appears to be a contradiction between the face the ANC presents to the world on these matters – exemplified by the South African ambassador to the UN successfully submitting a “historic” request in June to have a report drafted detailing the situation of LGBT citizens worldwide – and their inertia on a domestic scale.

The activists claim that, since Holomisa’s remarks in May, incidents of violence against the LGBTI community in South Africa have actually risen – although they stop short of suggesting that there is a direct link. They cite five murders of gay individuals since then. Of these, the murder and virtual beheading in Kuruman of Thapelo Makhutle received a fair amount of media attention, as did the shooting of lesbian Phumeza Nkolonzi in Nyanga.

Less publicised, however, were the deaths of Cape Town’s Neil Daniels (stabbed and set alight), Sanna Supa (shot thrice in her driveway in Soweto) and Limpopo’s Hendrietta Thapelo Morifi (another stabbing and virtual decapitation). Their memorandum adds that there are five other murders committed over the last two months still being assessed for “overtones of homophobic murder”.

In Cape Town on Wednesday, marchers wore T-shirts reading “Free to choose my gender”, “homophobia hurts” and “black lesbian”. “How Many LGBTI Have To Die B4 Hate Is A Crime?” demanded a large sign, referencing the issue (recently covered by the Daily Maverick) of the lack of hate crime legislation in South Africa.

Outside Sahara House, Luleki Sizwe’s Ndumie Funda handed over the memorandum to a tense-looking delegate sent to collect the document on behalf of ANC Western Cape delegate Songezo Mjongile. “Take this to your Cabinet and tell them how angry we are!” Funda railed. The Gay Flag organisation reported later that they had spoken on the telephone with Mjongile and had been told: “I confronted (Patekile) Holomisa on your issues. This is a Contralesa issue, not an ANC issue”. Mjongile allegedly pledged greater ANC support on the issue, however.

“Luleki Sizwe” means “Discipline the Nation”, which exemplifies the Nyanga-based organisation’s take-no-prisoners approach when it comes to combating the scourge of corrective rape. “People are sick and tired,” Funda told the Daily Maverick. She started the organisation after the gang-rape-related death of her fiancée. “We experience fear wherever we go. We need to be united and work together to fight homophobia. Nobody owns this struggle.”

Activist Pam Dlamini, a co-organiser of the march alongside The Gay Flag’s Eugene Brockman, expressed similar sentiments. “We are really worried about these killings. We take these issues so seriously some of us did not go to work today in order to be able to come here,” she said. “We are citizens of South Africa, but we are not free.”

Dlamini saw it as President Zuma’s responsibility to take a firm public stance against homophobia. “Why can’t he just stand up and say something? During the xenophobic violence they were happy to tell people the violence was unacceptable. Why can’t they do the same thing for homophobia?”

Dlamini testified to the fact that there is a very real climate of fear at the moment for black lesbians in particular. “We are always afraid. I walk around with a pepper spray everywhere I go now,” she said. “I can’t hold my girlfriend’s hand in public. But what is so wrong with us doing that?” DM