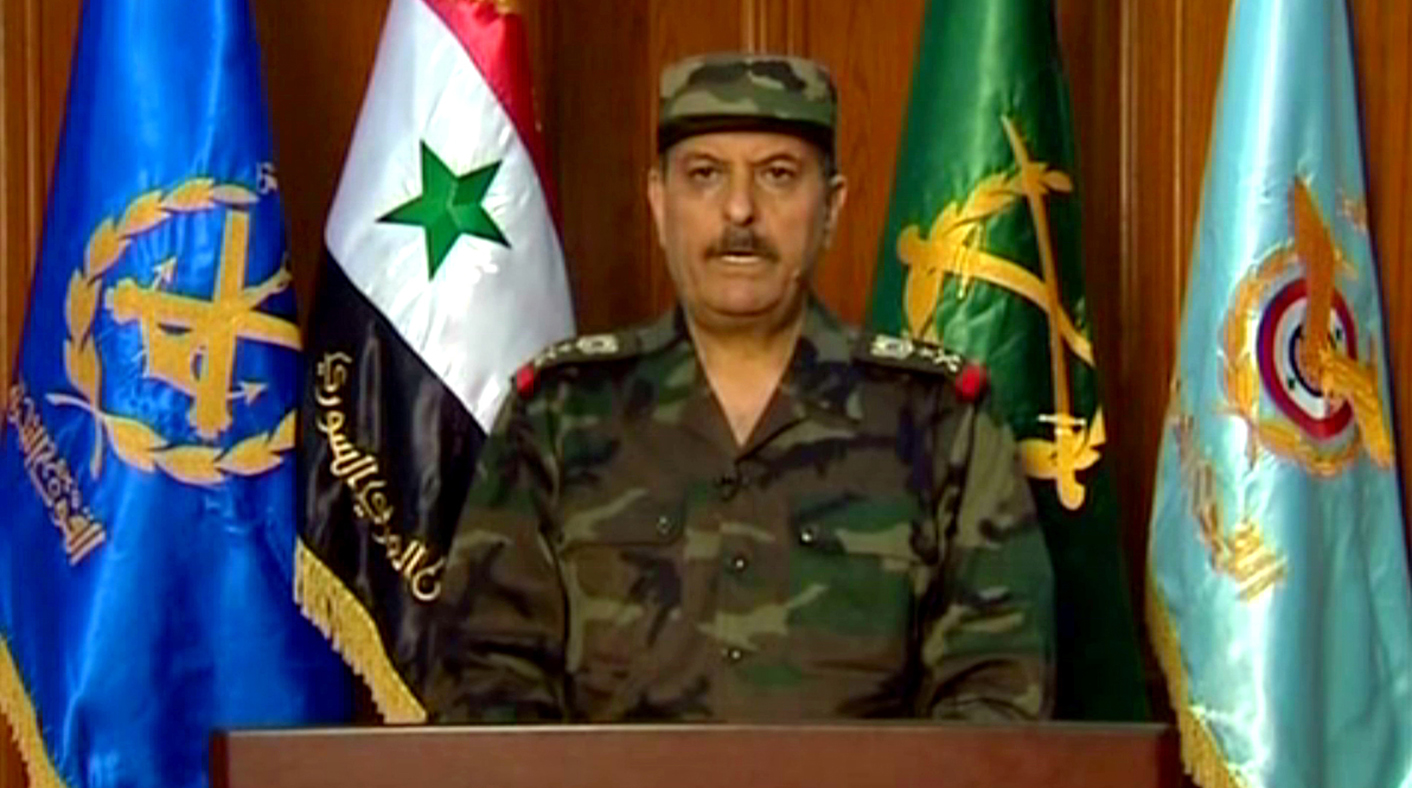 The suicide bomber who attacked a crisis meeting of Bashar al-Assad's security officials on Wednesday did more than just kill and wound some of Syria's most senior figures. By Samia Nakhoul.

He blew apart the inner circle of trusted kin that the Syrian president has relied on to control every aspect of the state he inherited from his father, and was counting on to crush the 16-month-old rebellion against him.

The bomber, apparently an insider and possibly a trusted bodyguard, struck at the daily meeting attended by ministers and senior security officials as battles raged inside Damascus, within sight of the nearby presidential palace.

On the ground, the security forces reaction was swift. As Damascus vowed to retaliate for the bomb attack, its forces hit rebel positions across the capital. Analysts said the response heralds more bloodshed to come.

“It is a serious blow to Assad. It will weaken Bashar but it is not necessarily good news for the opposition too,” said Patrick Seale, the biographer of Assad’s father, Hafez. “It is likely to make the regime much more violent, ruthless and brutal. It will become more savage.”

He said the chances of a negotiated transition of power were now even more remote.

The Assad family that has ruled Syria for four decades is struggling for its life against a growing rebellion. Before the attack on Wednesday officials close to Assad described a tight inner group determined to fight its way out of the crisis, even as support for the government falls away.

At its head is President Assad, who inherited power from his father in 2000 and who friend and opponent alike say appears increasingly detached from reality, convinced he is fighting a conspiracy against him and Syria.

He drew around him a tight circle of family and clan members, and a security establishment staffed mainly by adherents of the Alawite minority to which the Assads belong, a branch of Shi’ite Islam in a country that is three quarters Sunni.

“Even those who love him feel he can no longer provide security,” said Ayman Abdel-Nour, an adviser to Assad until 2007 and now an opposition figure. “They think he is useless and living in a cocoon.”

“He thinks of himself as God’s messenger to rule Syria. He listens to the sycophants around him who tell him ‘you are a gift from God’. He believes that he is right and that whoever contradicts him is a traitor. Many of his close friends and advisers have either left him or distanced themselves from him.”

In response, Assad has taken charge of a military crisis unit and takes all the daily decisions, from the deployment of army units to tasks assigned to the security services, as well as mobilisation of the Alawite Shabbiha, the militia accused of a series of massacres in the past two months.

“Bashar remains the centre. He is involved in the day-to-day details of managing the crisis,” said a Lebanese politician close to the Syrian rulers. “He set up an elite unit led by him to manage the crisis daily.”

In this unit, intelligence chief Hisham Bekhtyar was responsible for security coordination, Rajha was minister of defence, Shawkat, the president’s powerful brother-in-law, was deputy defence minister. Alongside them are Ali Mamlouk, special adviser on security, Abdel-Fattah Qudsiyeh, head of military intelligence, and Mohammad Nassif Kheyrbek, a veteran operator from the era of Assad’s father.

“KILL OR BE KILLED”

“Maher is directly involved in the confrontation on the ground and is in direct contact with every one of them. He has direct military responsibilities,” the Lebanese politician said.

As the rebellion gains ground, Assad’s inner circle is beginning to realise it faces a serious crisis. “In the hierarchy of the authorities you don’t see a noticeable change,” he said. But “you hear more realistic language. The prestige and standing of the regime has been scratched”.

Abdel-Nour, the former Assad adviser, paints a darker picture of the inner circle. He stresses that there is nothing autonomous about the way government units operate, whether the shelling of opposition neighbourhoods by Maher’s armoured columns or the killing of villagers by the Shabbiha militia. All units are under Bashar’s command and many have family ties.

Each region has its own Shabbiha leader and many of the central cities are led by Shabbiha men related to Assad.

The 46-year-old Assad said last month that Syria was at war and ordered his government to spare no effort in pursuit of victory against rebels he has described as terrorists.

Drawing parallels with his earlier profession as an eye surgeon, he said: “When a surgeon performs an operation to treat a wound do we say to him: ‘Your hands are covered in blood’?”

“Or do we thank him for saving the patient?”

Some long-time observers of Syria’s secretive politics believe Assad’s attempt to keep tight control of his forces will not necessarily protect him from being toppled internally if it looks as though he cannot prevail militarily.

Patrick Seale said: “Assad is a front man for a big security establishment of 300,000 regular army. He has a small clique that supplies him with information.

“They might still mount a coup against him and that remains his big threat.”

After 16 months, the conflict has reached the seat of Assad’s power in Damascus. Government forces and opponents are fighting with the ferocity of those who know what awaits them if they lose.

“There is war in Syria: either kill or be killed,” said the pro-Syrian Lebanese politician.

A Western diplomat added: “They are fighting like a pack of wolves.”

While facts on the ground often cannot be verified because independent media are largely excluded from Syria, the conflict is now seen by observers to have changed from an uprising in poor towns and villages to a civil war that has reached the streets of the capital.

It has also become a proxy war pitting Russia and Shi’ite Muslim Iran, which back Assad, against Sunni Muslim powerhouse Saudi Arabia, Turkey and Qatar, which are arming and funding the Sunni rebels. The rebels now include the Free Syrian Army, a group of army defectors joined by Sunni youths, al-Qaeda style Jihadists, the Muslim Brotherhood, and local pro-democracy Sunni liberals.

Weapons are being smuggled across the borders from Lebanon, Turkey, Iraq and Jordan.

While the rebels inside Syria are gaining ground, the Syrian political opposition in exile remains bogged down in factional divisions and is losing influence.

The government is meanwhile losing its ability to spread fear. Defections of senior officers and officials have accelerated in recent weeks although the backbone of the military remains intact due to Alawite solidarity.

“The Syrian regime is slowly and totally sinking. I don’t know what the timeline will be. It is becoming difficult for the state to control the country. It is like a fire engine, they extinguish one fire and find that another fire has started in another place,” said a senior Western diplomat.

Many Sunni officers, police and security staff have either defected or are not reporting for duty. Those manning traffic and police checkpoints are mainly Alawites, who can be recognised by their accent, residents say.

Responsibility for defending the Assads is falling on the mainly Alawite battalions led by Maher, Bashar’s brother.

In outlying cities and on the outskirts of the capital, residents say the only sign of any government presence is tanks and armoured personnel carriers stationed on main roads. Traffic and ordinary police are nowhere to be seen.

Residents stood in disbelief at the sight of rebels manning checkpoints, blocking streets and clashing with government troops in Damascus. “A few days ago, we would have said this was impossible. It is a dangerous indication,” said a resident reached by telephone.

Government forces are scared of entering some rebel areas and they use artillery and helicopters gunships to bomb rebel positions, Syrians reached by telephone say.

Close watchers of Damascus say while the authorities’ power has been eroding they doubt that the lightly armed rebels can defeat an army, backed with Russian-made tanks, armoured personnel carriers and warplanes.

“Bashar and his regime have been profoundly destabilised but there is some doubt whether he can be toppled by the rebels for all the following reasons: Russia’s protection, a divided opposition and no appetite for military intervention,” said Assad biographer Patrick Seale.

But he added: “No regime can last forever … I cannot see a peaceful settlement for the moment. I can see a bloody stalemate, more shooting, more killing. The situation is very bad, chaos and insecurity are everywhere. Kidnapping, killing and hostage-taking, ethnic-cleansing are rife,” Seale said.

He said Assad’s officer corps would not give up on him unless they feel they will have a role in a post-Assad Syria.

Despite the carnage and the failure so far of international peace efforts, Western diplomats said a Libyan-style military intervention is off the table, because of geopolitical complications and fear of a regional conflagration.

“Libya is different from Syria … Russia (is) involved on the ground and backing Assad. Iran is providing a lot of financial and military help for the Assad regime,” the Lebanese politician said.

Russia and Iran, Abdel-Nour said, are not just supplying Assad with weapons. They are also providing equipment to intercept the communications of the Free Syrian Army.

U.S. Defense Secretary Leon Panetta said Assad’s government would be held responsible if it failed to safeguard its chemical weapons, which Western and Israeli official have said have been moved from storage sites.

The focus of the United Sates, Qatar and Saudi Arabia is to try and entice senior officials and officers to split from the Assad circle to weaken his hold on power.

“At some point, they will feel that there is no way out and they have to abandon the boat before it sinks,” said the Western diplomat.

Many observers say in the absence of outside military intervention, the conflict could slide into a full-scale civil war that would further weaken the Assads, bring in new players and force an internationally sponsored transfer of power.

“The regime has not lost full control. We will transition into civil war. The opposition has become a lot more powerful and capable at the military and financial level with the help of Saudi Arabia, Qatar and Turkey,” said Ayham Kamel of Eurasia.

“Incrementally, the regime will become weaker,” he said. “Change will come in two ways: either through a shift in the balance of power in the conflict, or though a prolonged civil war, or through a negotiated compromise and international transition plan sponsored by the US and Russia,” he added.

“Even if Bashar goes it doesn’t mean that someone will take over,” he added, suggesting that the country will collapse into sectarian anarchy.

In the meantime, the authorities have upped their game, using tanks, artillery and helicopter gunships against rebels waging what they call “The Battle of Damascus”.

“The question Damascenes ask has changed from before,” one resident said. “They no longer ask if the regime will fall but when? DM