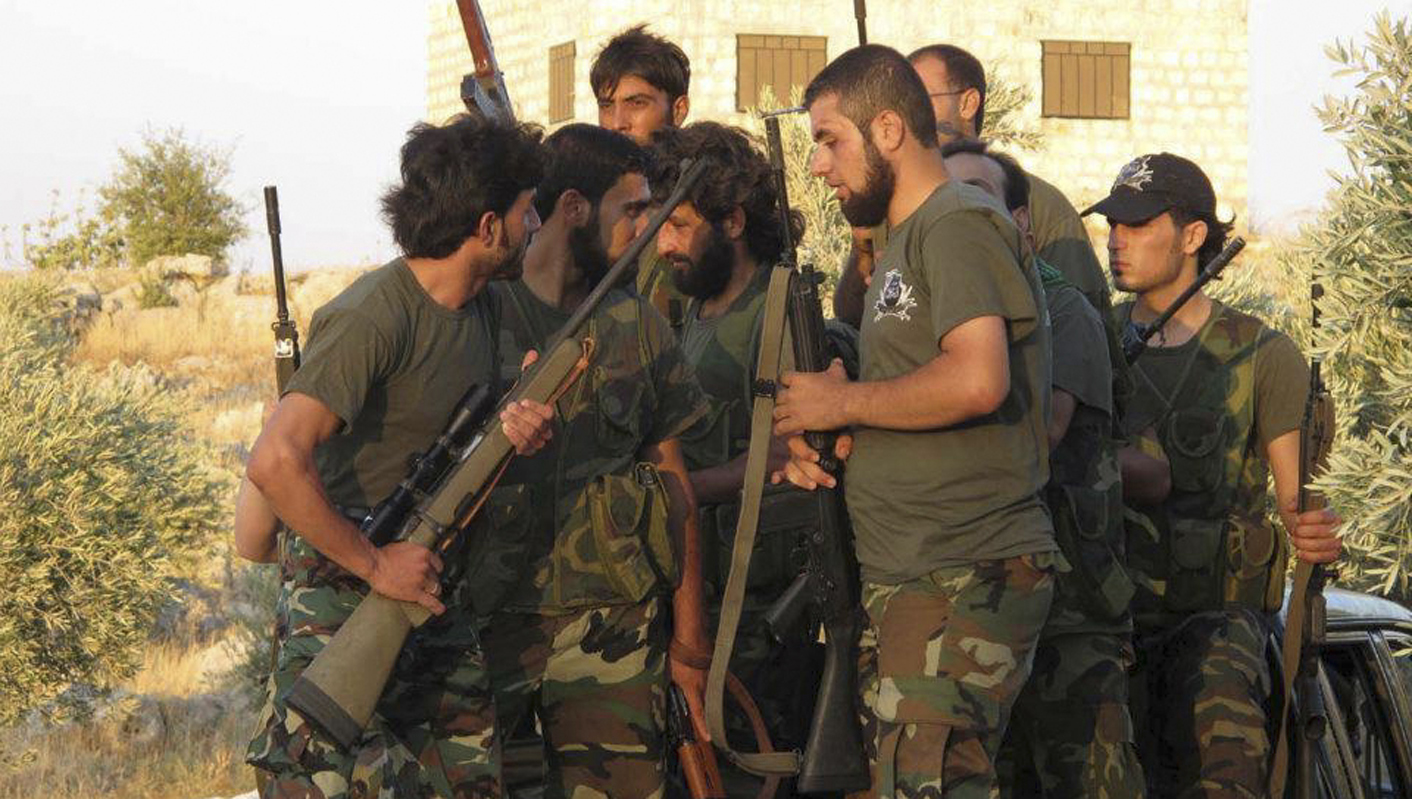 Syrian rebels point to high-profile defections, heightened violence in Damascus and revelations of another "civilian massacre" as signs of a turning point in the uprising - even as insurgents flee fighting in the capital and evidence from the Hama killings suggest they simply resulted from another uneven clash between regime forces and local fighters. As the chaos undermines rebel aspirations and Russia refuses to abandon its long-standing ally, the Syrian army stands mostly intact. By VICTOR KOTSEV (Asia Times Online)

“The sounds of war are clear throughout the city,” an activist from Damascus told the Associated Press on Monday. “They are bouncing off the buildings.”

This description captures both the horror and the hope – as far as the rebels are concerned – embedded in the highly symbolic violence that has engulfed the Syrian capital since Sunday, complete with the sustained use of tanks, artillery, barricades and rocket-propelled grenades. The partial collapse of the Syrian regime even at its core was lauded by opposition activists as a turning point in the conflict, and another wave of high-profile defections in the last days bolsters this impression.

Particularly noteworthy is the defection of the major general who was in the past responsible for the Syrian chemical weapons, Adnan Salo. It sheds new light, for example, on last week’s reports that the regime had relocated some of its poison gas stockpiles, and suggests that the move was motivated by fear that the security of the weapons of mass destruction had been compromised.

On Sunday, moreover, the International Committee of the Red Cross announced that it officially considered the conflict a civil war. “We are now talking about a non-international armed conflict in the country,” its spokesman said. The announcement was widely interpreted to mean, among other things, that international humanitarian law now applies in Syria. It was hailed by the opposition as both a shortcut to bringing war criminals to justice and a tool to put pressure on regime officials to defect or face persecution.

In practice, however, these developments, and also the high-level diplomatic haggling which surrounds them, are highly ambiguous, while the enthusiasm of the rebels covers an exceptionally grim and deadly reality. Given the chaos in Syria and the great difficulty in verifying much of the information coming out of there, reports can be manipulated in both subtle and not so subtle ways.

Take, for example, the battles in Damascus. Despite the bravado of the opposition, a rebel told Reuters on Monday that his comrades would have left the city much earlier if they had not been encircled by the government forces: “They want to leave. If they were able to leave they would have left… The whole area is surrounded.”

Reports of a large-scale civilian massacre near the city of Hama last Thursday, which initially exploded in the international media and elicited calls for action at the United Nations Security Council, also turned out to be problematic as more information started to come to light.

“New details emerging Saturday about what local Syrian activists called a massacre of civilians near the central city of Hama indicated that it was more likely an uneven clash between the heavily armed Syrian military and local fighters bearing light weapons,” the New York Times wrote on Saturday. As of Monday, the unanswered questions had not cleared, and Russia blocked a Security Council statement condemning the killings.

Likewise, speculation about the Syrian chemical weapons remains unresolved. Some claim that last week’s reported transfer was aimed against the rebels, others that they threaten Syria’s neighbors, and still others that the Syrian army simply intended to secure them. Given the fluidity of the situation, no scenario is out of question in the future, but for now the noise seems exaggerated. Such claims, moreover, can serve major propaganda purposes, as the overthrow of the former Iraqi dictator Saddam Hussein, initially billed as an operation against weapons of mass destruction, demonstrated.

Furthermore, it is hard to gauge the precise significance of the defections. While some fairly high-ranking figures have left in the last days, there is no shortage of generals in Syria. For now, the departures do not seem to spell the end of the regime, although they show a clear trend of deterioration in its standing.

Even the Red Cross statement is not as singlehandedly supportive of the rebels as many observers have interpreted it to be. As Mary Ellen O’Connell, a prominent legal scholar and a professor of law and international dispute resolution at the University of Notre Dame, told Asia Times Online in an email, “[The ICRC statement] means that the Assad regime is facing an organised armed opposition engaging in military force, and it has the legal right to respond in kind. The Syrian military will have more authority to kill persons based on their being part of the armed opposition than when Assad was restricted to using force under peacetime rules.”

She added: “Before the situation escalated to armed conflict, Assad faced serious charges for violations of human rights. Now he may also face charges for violating international humanitarian law, but those are potentially less serious than charges of crimes against humanity …

“Outside military intervention on the side of the opposition, even now, would only be lawful with Security Council authorisation… The Assad regime, by contrast, as the government in control, may legally request assistance unless the Security Council prohibits it by imposing, for example, an arms embargo.”

An arms embargo at the Security Council, however, does not appear to be forthcoming. On Monday, Russia continued to oppose any harsh condemnation of the Syrian regime, as well as any text with references to Chapter VII of the UN charter (which can authorize foreign military intervention). The Russian foreign minister, Sergei Lavrov, even accused his Western counterparts of “elements of blackmail” when they reportedly threatened to block his plan to extend the mandate of the UN observer mission in the country, set to expire on Friday.

The observers have mostly been confined to their hotels in the last weeks, and Western diplomats complain that Russia’s proposal, which is ostensibly aimed at facilitating further peace talks, lacks any effective means of putting pressure on the two sides. Russia, backed by its ally China, counters that the more aggressive Western drafts aim to replicate the Libyan intervention in Syria.

More cynical observers speculate that Russia is bargaining for a high price in order to abandon its long-standing ally in the Middle East, likely involving American concessions on the issue of the European missile defence shield. Indeed, as the situation of the Syrian regime deteriorates, it is plausible that its allies, including Russia, China, and Iran, are doing their own contingency planning.

For now, however, the Syrian army is still mostly intact. Moreover, given the ambivalence both of reports from the ground and in the evaluations of the major international organisations, the Syrian regime does not yet seem on the verge of collapse, and its foreign backers have not run out of bargaining space.

The chaos, meanwhile, only grows, and its foremost victim is the civilian population in Syria. Over 17,000 have died in the conflict so far, the latest data shows; the number of victims in the past few days is unknown.

Hopes of ending the civil war are slim. Peter Wallensteen, a leading peace researcher at the University of Uppsala and the director of the Uppsala Conflict Data Program, told Asia Times Online that an arms embargo enforced by regional countries, broadly similar to the ones imposed on Liberia and the Ivory Coast in the past, might help, but he emphasised that an immediate and coordinated response by the international community was crucial.

“It’s increasingly an internationalised civil war,” he said, “and as we know from previous history, the more internationalised, the longer the conflict will be. So there is an interest in finding a way out, and quickly. Otherwise this will turn into another Afghanistan.”

Asked to clarify the distinction between his definition of the conflict and that of the ICRC, he responded: “We agree that there is a civil war, but now so many weapons are coming from the outside, that there is actually an internationalised civil war.”

For now, however, the international community appears to be almost as far from a genuine constructive compromise as are the different sides on the ground. Amid an escalating foreign-backed civil war in Syria, more tragedy looms. DM